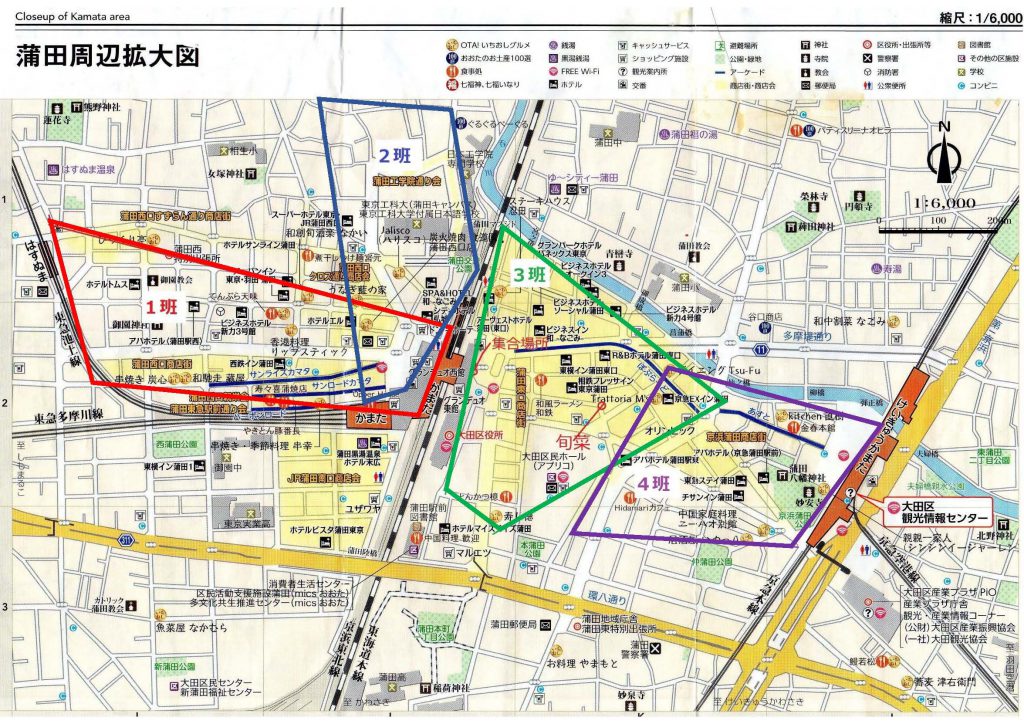 Kamata has variety feces. Does the border of lighting exist in Kamata? We devided JR Kamata line area into four parts and researched them. 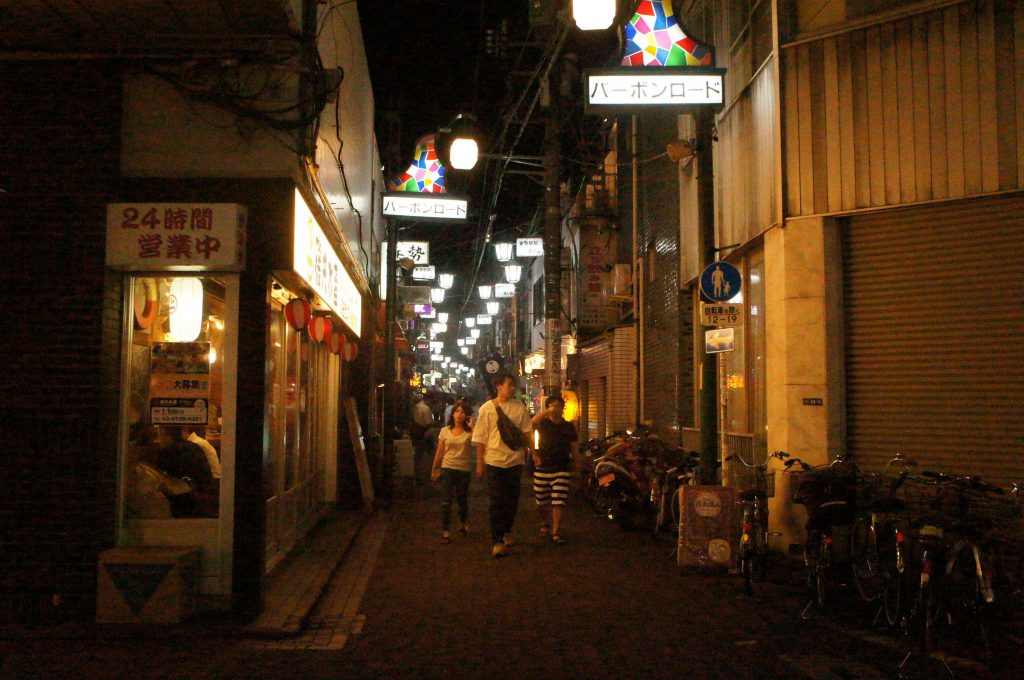 Bourbon road that has the Showa feeling 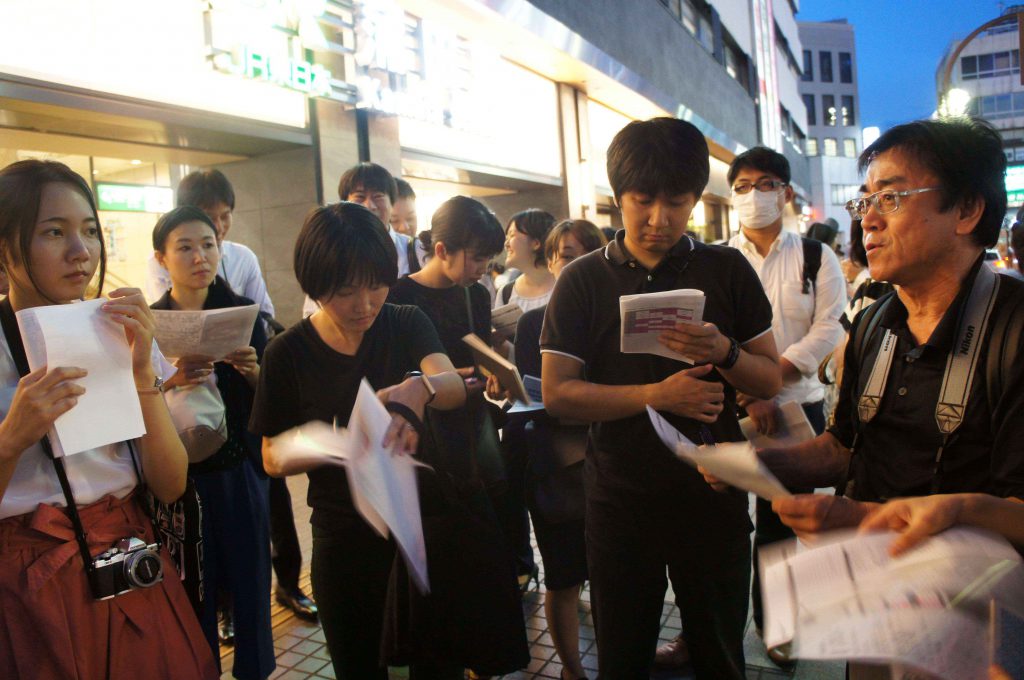 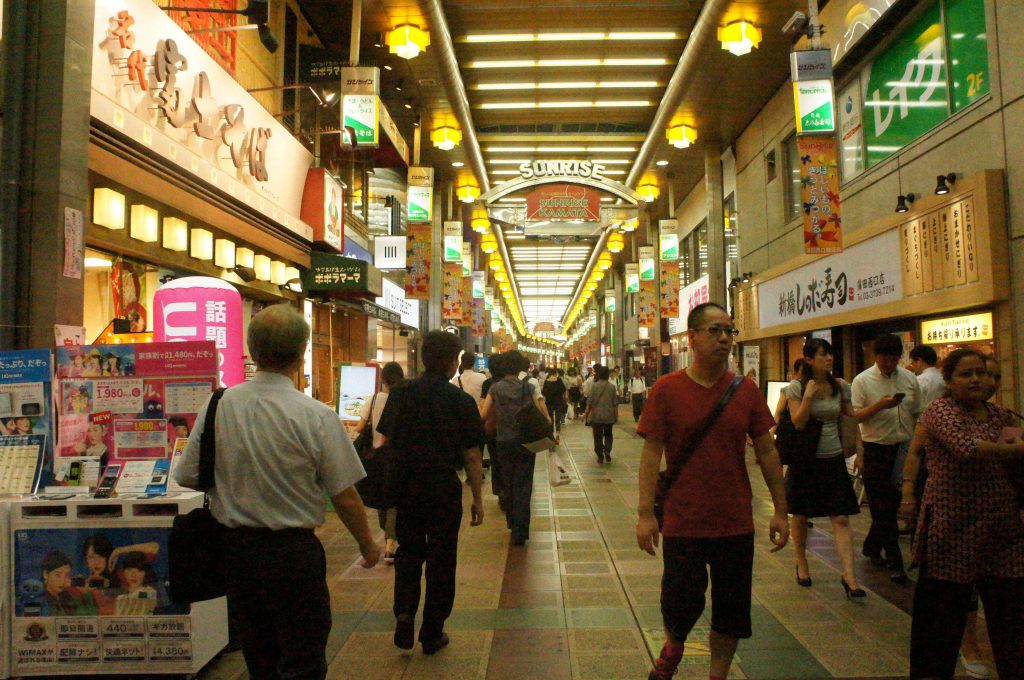 Entrance of the Sunrise Road, arcade goes through for 400 meters

■Group 1: JR Kamata Station-West exit, Tokyu line
Group 1 went from Granduo West Building→400 meters arcade, “Sunrise Kamata” →”Sun Road”, place where canopy was first provided in 1965→”Bourbon Road” which has many attracting restaurants. Members were surprised of how dark it was around the entrance of the station when they came out from the West Bldg. There were no light dust on neither on the road nor vertical surface, and it was about 10 lux. Down lights under the eaves were not lighting up. Many people felt lighting should improve for safety and reassurance.
On the Tokyu Plaza Façade in front of the station, there was an advertisement with LED emitting strong light, and a banner advertisement. However, there were some opinions saying lighting quantity of a banner advertisement was way less than the other lighting of advertisement, and was not so effective.
Sunrise Kamata was reasonably bright because of straight tube type FL that directly lines with the street, and it had many inexpensive and abundant selected stores, and gave an appearance of old downtown. Yet, we felt that the advertisements we often see these days which were framed with LED lights were too strong to the front.
Many villains and heroes of the light co-existed in Sun Road and west side of the Sun road that doesn’t have canopy. We felt strong glare from the street lights emitting white lights with metal halide lamp clearly seen in the street with night sky.
On the other hand, mass eateries that has Showa feeling, tavern with white outer wall and creepy neon colored pendant light standing out inside, and Tempura restaurant providing safety with overflowing warm light from the restaurant to pedestrians were mentioned as heroes from everyone.
People realized that Kamata is a “Friendly Downtown” which has the timeless prosperity of the whole town, and the obscurity unique lights that coexists and prospers. (Tomoya Furukawa)

■Group 2: JR Kamata Station-west exit, residential area
Group 2 went from west exit of Kamata station, walking residential area that is a little distant from shopping street and downtown.
Cross-Street shopping district lined with small restaurant uses many electric light bulb, filament light bulb, and light source of metal halide lamp. We felt the Shitamachi or old town feeling from the orange light with low colored temperature. There were many pedestrians and was a crowded street.
The atmosphere changed after we went through the street and we entered dark area. There were almost no lighting designed near the Tokyo University of Technology, and we only found pole lighting that provided the least amount of lights for pedestrians. Even though glass ball shaped pole lighting had the same design, translucent white and transparent glass are mixed depending on places which were uneven. Since glare was too strong, it became Villain. There were many opinions about the delicately designed campus being too good for not getting lit up at all.
We walked to the north and went to Nishi-Kamata where orderly housings were spreading. We were very surprised of the silence and darkness that can’t be imagined from the prosperity around the station. Because of how dark it was, too much white lights of the drugstores and supermarkets actually contributed the brightness of the road, and mentioned as a hero and not a Villain like we always claim. Small pubs and stores were also mentioned as heroes because the soft light gave nostalgic Showa-era feeling. Many street lights were mentioned as Villain for the lights getting inside the houses which had to be considered for the residential areas. (Simeng Huang)

Border of prosper and silence 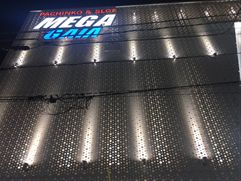 Façade lighting of the slot store got a good evaluation surprisingly. 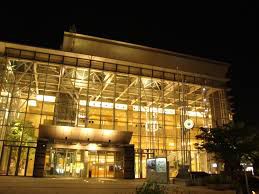 ■Group 3: JR Kamata station, around east exit
Kamata is rich in transportation network, and it represents Ota-ward for being entertainment district of Jonan. Group 3 researched from around the east exit of the Kamata station such as that sweet entertainment district to the shopping street in front of the station, including Sakasa-Gawa Street and administration area that recently had land readjustment under the collaboration with public, private and academic sectors.
Entertainment district had many striking lighting Villain just as we imagined, but we found one slot store has lighting design intention. Members liked the comfortable, soft façade with the element of surprises.
Also, the symbol of the town, shopping street had various lighting for each street. Even though it was in the shade of brightness around, it still has its originality. While those covered the characteristic of Kamata, we felt it was a very disappointing Villain that different types of LED lighting were exposed at where pedestrians look, and white lights being obtrusive. Thinking about shape of the light source might make them unique hero.
Next, Aprico Hall and others in administration area located ahead of Kyu- Sakasa-Gawa Street being central Kamata but also being back street, recently got re-maintenance and achieved high quality environment design beyond our expectation. We felt good impression on the pole lighting that won’t disturb the atmosphere. Especially, the soft emitting lighting that was made by blocking the glare from the embedded projector with the color corn was unanimously hero. This night walk made us think that catching attention of product made by accident is the epitome of the detective.
Kamata’s impression of the lighting that we felt this time was just as the members imagined. However, it became clear that the unique townscape made by inconsistency of the landscape leads to the attractiveness of this town. The whole town shows the difference very slow, for example, night in Kamata that has gray image, is trying a new thing for gathering people to the town. We all agreed to the opinion saying there will be other intended lighting plans, and because the assignment is clear, we can expect on Kamata’s potential. (Shiho Narimoto) 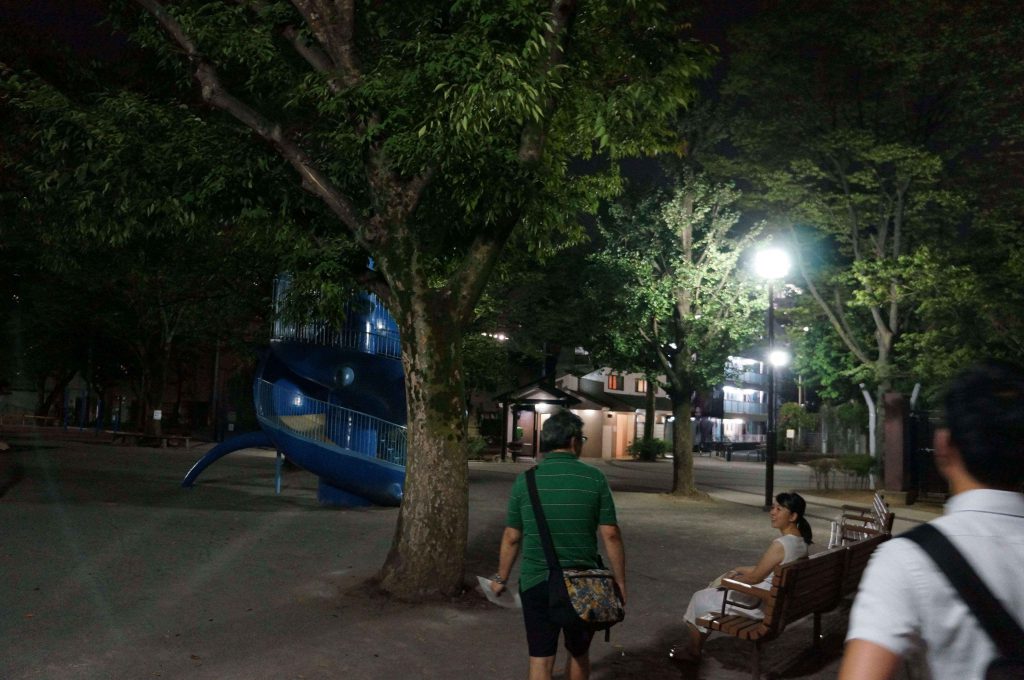 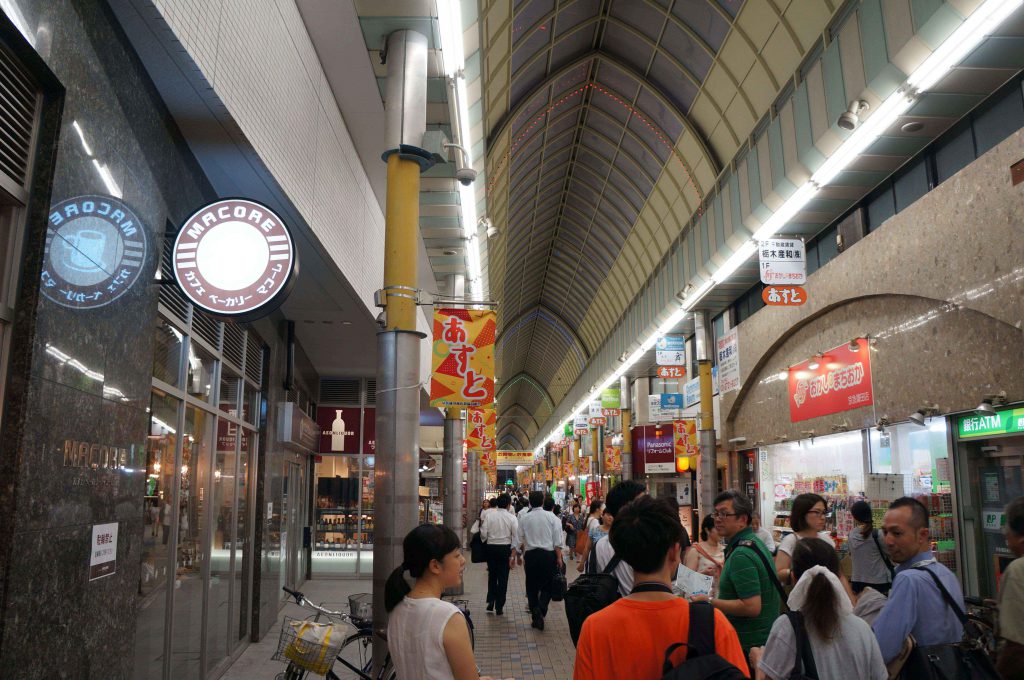 ■Group 4: Keikyu-Kamata station vicinity
Group 4 walked the shopping street “Asuto” that’s near the station, station square, and residential area on the south of the station. There leaves a calm darkness and retro atmosphere, and still has lightings that tells relaxing lifestyles. “Asuto” is an arcade that is 8-9 meters high, and it demonstrated personality by reserving lux level with the florescent lamp or lanterns and spotlights. On top of the arch, there were electric spectaculars and paneled color lightings. It was not something that can be said as organized, but it was the lighting that gave retro feeling, and made us feel the warmness of the townscape and the people.
Going through “Asuto” was a west exit of the station, and it was a generally dark and comfortable space. Façade of commercial facility “Asuto-with” is, for example, pachinko stores doesn’t expose its uniqueness, and its lightings don’t make us feel that way. And trees provide colors to the town didn’t give out the glare to the pedestrians and provided quiet and pleasant atmosphere. Lux level on the road was less than 10 lux, and the façade of the stores and deck connected to the station had dots and surface’s brightness spreading out. Many members evaluated it as a hero.
We found a park at Kamata 4 Chome while walking at southern side of the station. White light coming out from old styled street light did not reach 10 lux, but it didn’t have gloomy atmosphere. We were all sweating with the high temperature and high humidity, and with no wind, this calm darkness healed the tiredness of the members, and became the elements of lively conversation in a little rest.
Lastly, we walked residential area. Warm color sometimes appeared in the darkness. Apartments, barber, wine shop, fashion hotel, café restaurant located through the intersection were all lit up with warm color. It overturned the impression of Kamata and it was a place for retro and fashionable lightings.
The dark and retro lightings we saw were all comfortable, and it wiped out the crowded feeling that we had in our mind completely.
Because Keikyu Kamata station were elevated and reborn into futuristic appearance including station square, good lightings were remained and others are about to change into something better rooted with surrounding area and citizens. (Eiki Takeuchi)

City Survey: Tsukiji, Tokyo 2017/12/14,2018/01/12  Nemoto Isao + Masafumi Yamamoto  Night view from the opposite shore of Tsukiji, across the Sumida River. Tsukiji Market on the middle, Tokyo Tower and Tsukiji Bridge on the left, and Kachid…

2011.10.22 Experiencing dark & Light Up Ninja Experiencing Time Travel and Akari Workshop Edo-Tokyo Open-air Architectural Museum is located in Kodaira-city. In the museum, there are 30 buildings from edo-period that have been relocate…

Feeling Nature Interviewer: Isao Nemoto Nemoto：I was raised in Tokyo, but I really like the outdoors. Tokyo is, of course, a man-made metropolis, but I am always thinking about ways to incorporate more nature into city life. Mende：Do you le…