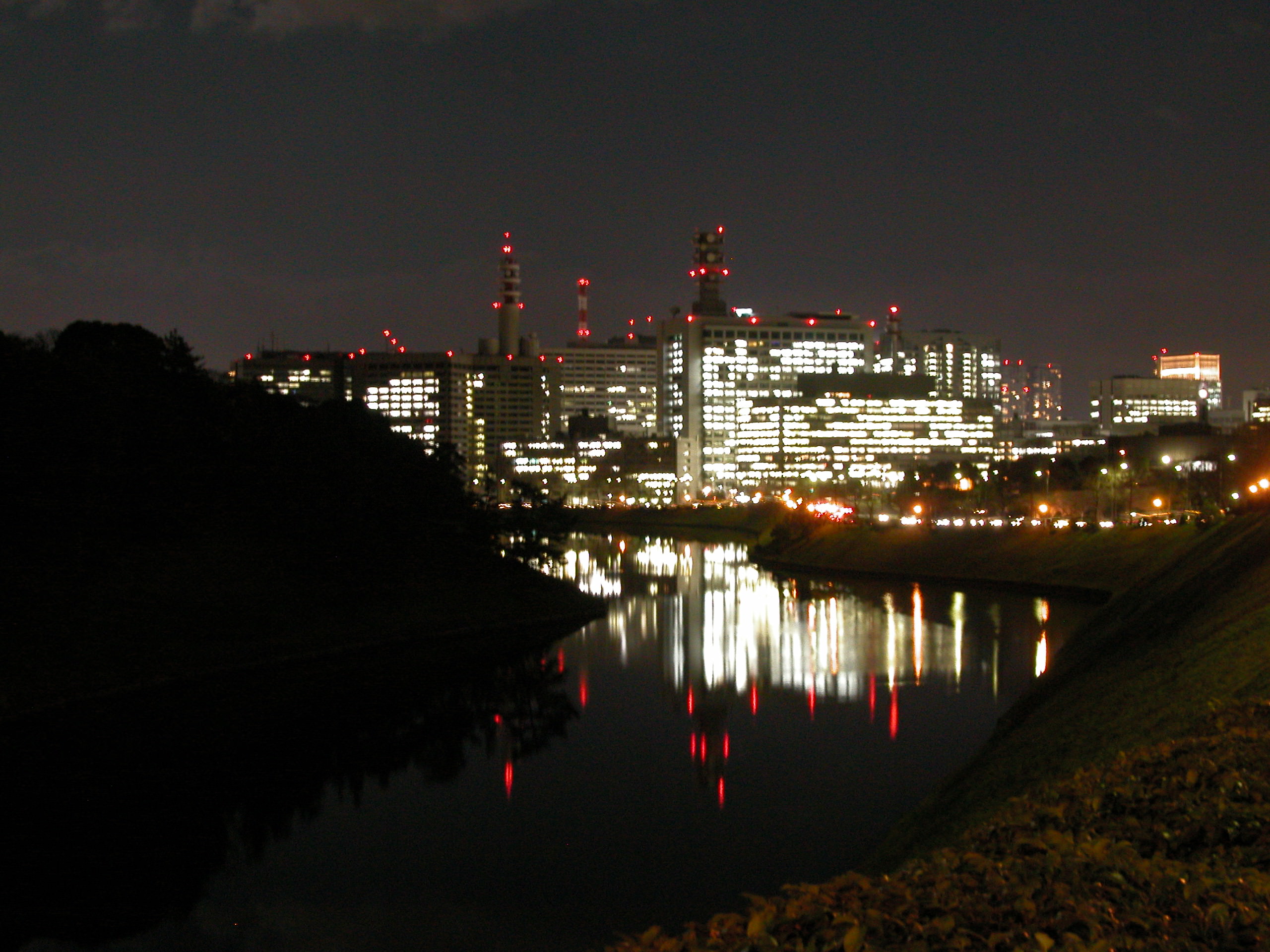 A large crowd of club members, from students to lighting professionals, gathered this evening to listen to and contribute to reports from the city walking tour team and their trek around the Emperor’s, reports on city lighting surveys in Sapporo and Fukuoka, exciting photograph and stories from a trip to see Alaskan Northern Lights, and a colorful display from lighting manufacture, Maxray.

The first report came from the city walking tour team and their 5km trek on March 25 around the Emperor’s Palace in the middle of Tokyo. The members gathered for the tour were further broken into two teams and the route was surveyed in two parts. Blue team members, Ken Okamoto and Yuki Ogawa, both presented digital pictures for the audience to see for themselves the contrast in lightness and darkness along the perimeter of the palace grounds from Yasukuni Shrine to Tokyo Station via Takebashi Bridge. Yellow team members, Aki Hayakawa and Rachel Nakayama, contributed their impressions of the tour on the opposite side of the palace with pictures including the moonlit moat and illumination of the Japan Budokan, Diet Building, and Tokyo Tower.

Club members Natsuko Ueda and Teruhiko Kubota stole the show with breathtaking slides of the Alaskan Northern Lights. The whispery green lights danced across the projection screen and into the hearts of the gathered club members as they relayed their accounts of waiting in the cold and dark of the night to glimpse nature’s spectacle. 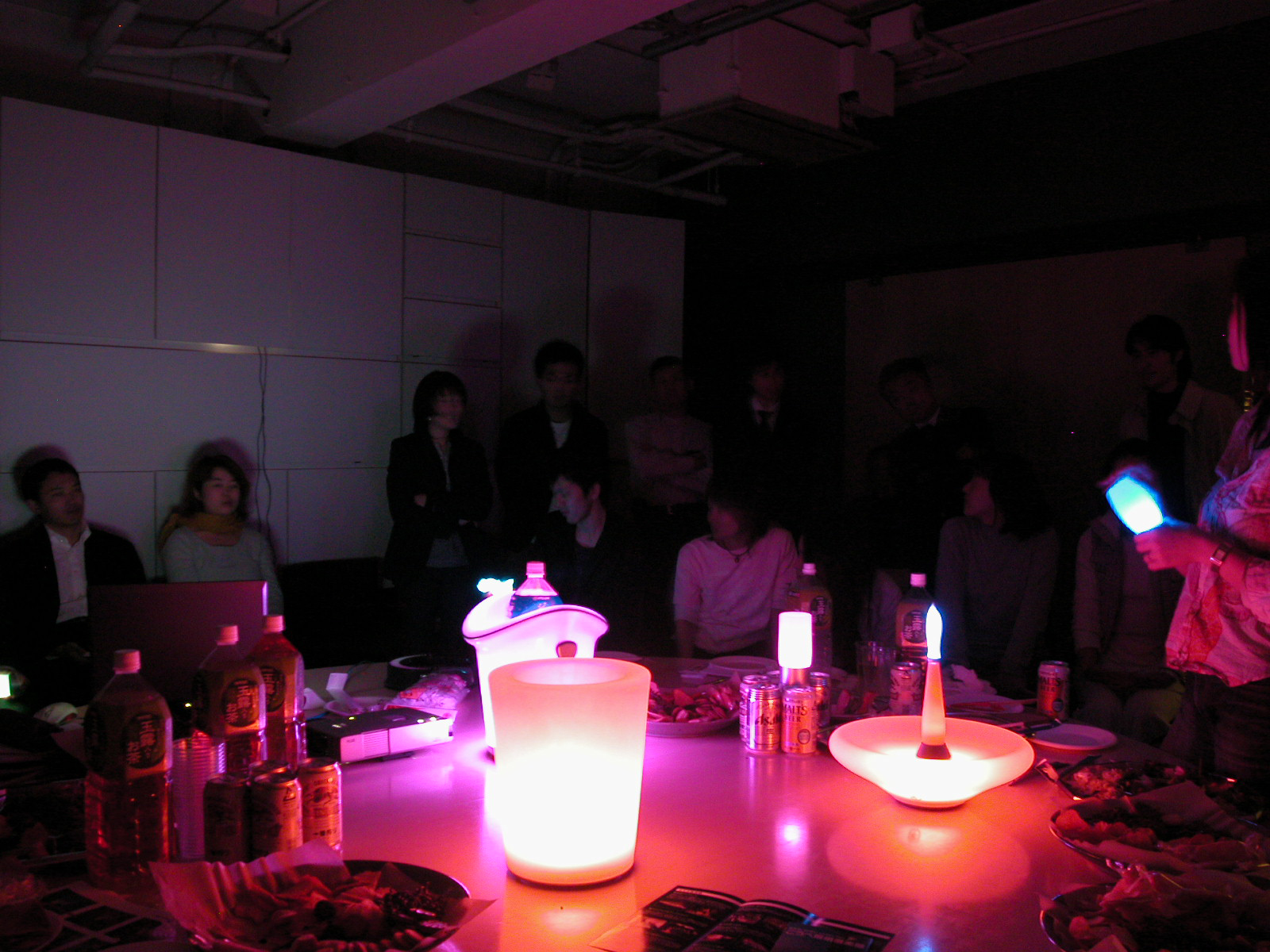 Lighting manufacture, Maxray, introduced to the club a new lineup of lighting products, Mood Light Objects. These playful LED based products wowed the crowded as they showcased their rainbow of colors across the room. Objects included, a wine chiller, bowl, and candles, great for any party setting!

In December of last year, club member Akiko Okunaka ventured to Sapporo in Northern Japan to survey the city lighting layout and Christmas illumination event. Pictures taken from the Television Tower overlooking the city showed the grid formation of the city streets, rare in Japan. The snow-covered rooftops reflecting light from the evening sky, also bathed the city in a beautiful blue-ish tint. The Christmas illumination filled downtown Odori Park with a festive spirit.

Next, Aki Hayakawa reported on her travels to the city of Fukuoka at the opposite end of Japan. Hayakawa concentrated her survey in three areas within the city, the riverside, underground shopping area, and the nightly row of street vendors. The pictures presented different lighting aspects of these various places, from low-tech booth lighting to the refined shadows and light of the underground shopping area.

17 October During the year 2008-2009 the Lighting Detectives are hosting a three-part Salon Series focused on “Residential Lighting: Past, Present, and Future.” Part 2 of the series titled: “Is the Incandescent Lamp being Phased Out?” picke…