Golden Mile Complex and Golden Mile Tower are two of the most iconic buildings in Singapore that were completed between 1973-1974. Lighting Detectives investigated how lighting can contribute to preserve these historical buildings. 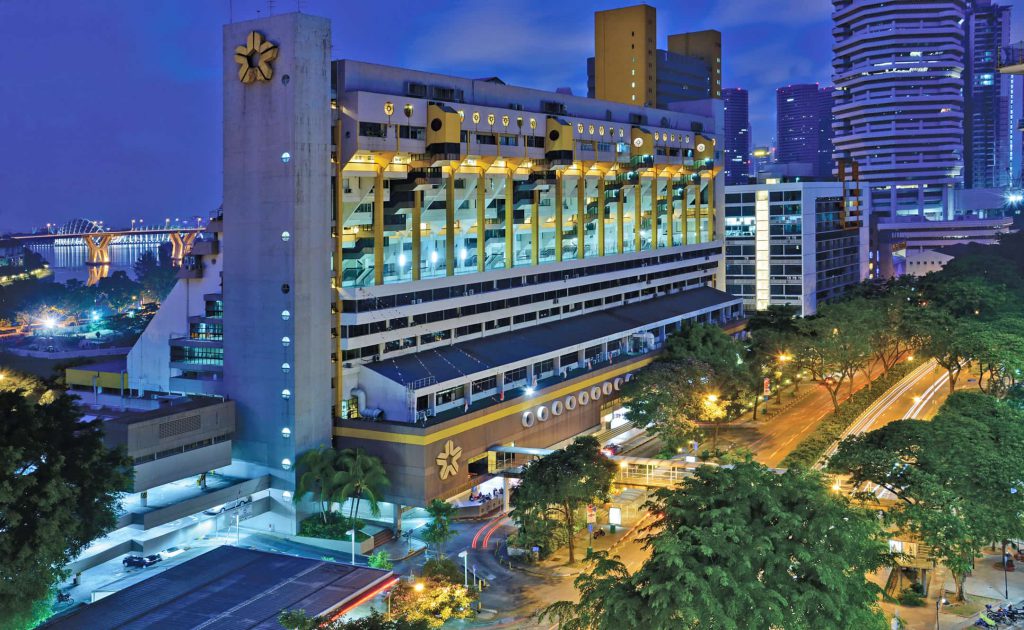 A blend of Thai culture + Treasure trove of groceries and food + Pubs and KTV creates a unique blend of mismatch that invokes a flavor unique to Golden Mile Complex.
Photo by Darren Soh, Singapore. 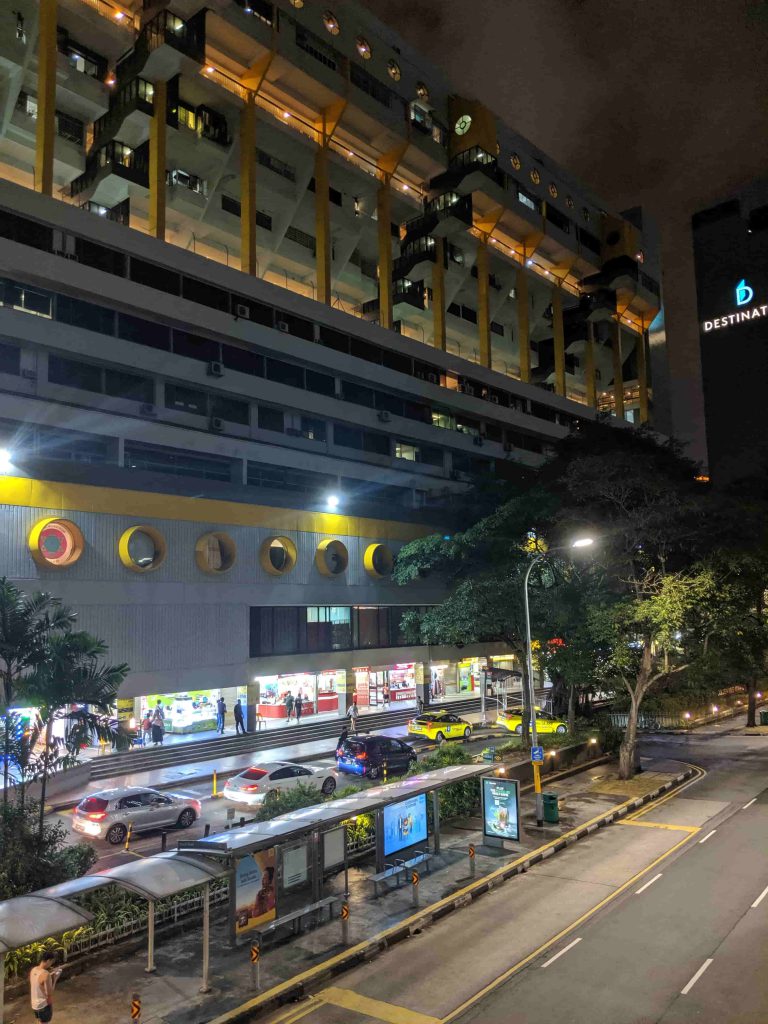 A typical evening at Golden Mile Complex:the retail areas are still busy operating at the lower levels,while the offices at the mid levels are closed,and the residents are resting at the upper levels. 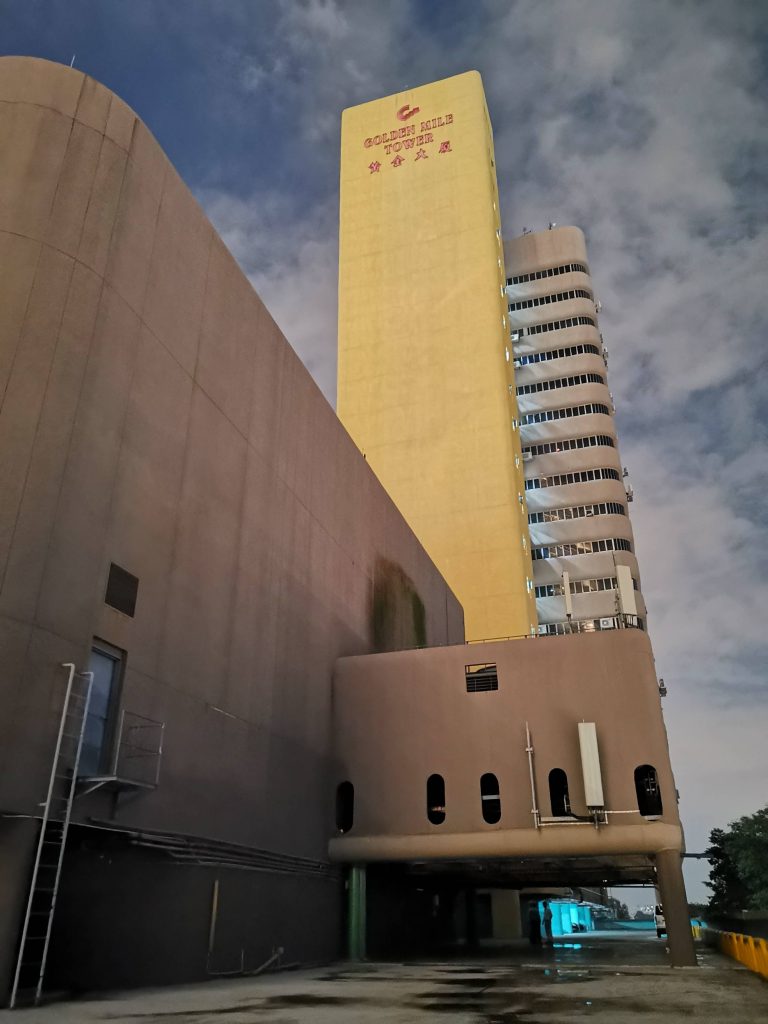 The iconic color and facade design of Golden Mile Tower make the building recognizable even from afar.

Golden Mile Complex and Golden Mile Tower are two prominent buildings that were part of Singapore’s plan to facilitate greater flexibility and autonomy in the comprehensive redevelopment of Singapore Central Area. The buildings stretch out in between Nicoll Highway and Beach road.

Golden Mile Complex is a mixed-use development which consists of commercial, residential, entertainment services, and transportation center. It is a megastructure which was designed by Gan Eng Oon, William Lim and Tay Kheng Soon of the Singapore architect firm, Design Partnership (DP Architects). The vertical stepping blocks that form the unique terraces of the building has crowned the Golden Mile Complex to be one of the buildings with brutalism architectural style. Located at the next plot of land, the 24-storey building of Golden Mile Tower consists of rental office and retail space. The building was design by Goh Hock Guan Design Team.

The two buildings are also been known as ‘Little Thailand’ due to the number of Thai cultured activities and stores that could be found within these buildings.

Our initiative from the Lighting Detectives is to look for ways to enhance such preliminary buildings for Singapore’s redevelopment period into a new perspective using our best element named light and shadow.

On the event day, the participants were gathered at the ground floor of Golden Mile Complex. Due to the strict regulation from the building management, we had to limit the number of participants to a maximum of 20 spots. More than half of them are practising in the architecture and design industry, while the others are non-designers who are curious and have enthusiasm towards architecture in Singapore.

Minutes away from the blue moment, we rallied them into the office area of Golden Mile Complex after gathering near the Taxi stand. After a short experiential walkthrough the grocery and restaurant areas that fill the 1st to 4th storey, the participants were briefed on gathering their thoughts and opinions on architectural origins and preservation of both Golden Mile Complex and Golden Mile Tower.

We each guided a group of approximately 7-8 Detectives through the open zig-zag stairwells towards the blue tint of the skylight at the top to uncover the overlapping of natural light within the office area. Detectives were thrilled to uncover that despite the brutalism style, the architecture of Golden Mile Complex catered for natural lighting that brings a glimpse of reliefs to the brutalist labyrinth of offices below. Upon reaching the top, discoveries of character filled residential units contrast the mundane sections below.

Upon reaching the top, discoveries of character filled residential units contrast the mundane sections below.

We continued to Golden Mile Tower through a smokey underpass not known to many of the public. Detectives were treated to a multi-sensory stimulation as the air fills with cigarette smog and chatters from bar hostesses during their break, dashed with neon lights from the bar signages. Emerging from the underpass, investigation tour brought detectives through Golder Mile Tower where several local-known amenities such as inter-country buses to Malaysia and Thailand, military sewing shops and an indie cinema from 1973 were hidden within the unique mix of overspill activities from Golden Mile Complex.

Lighting Detectives investigation segment concluded with spectacular views of the city skyline from both the multi-storey carpark and Level 22 of Golden Mile Tower. Detectives consolidated their thoughts to share views on architectural history preservation efforts for the workshop planned later. 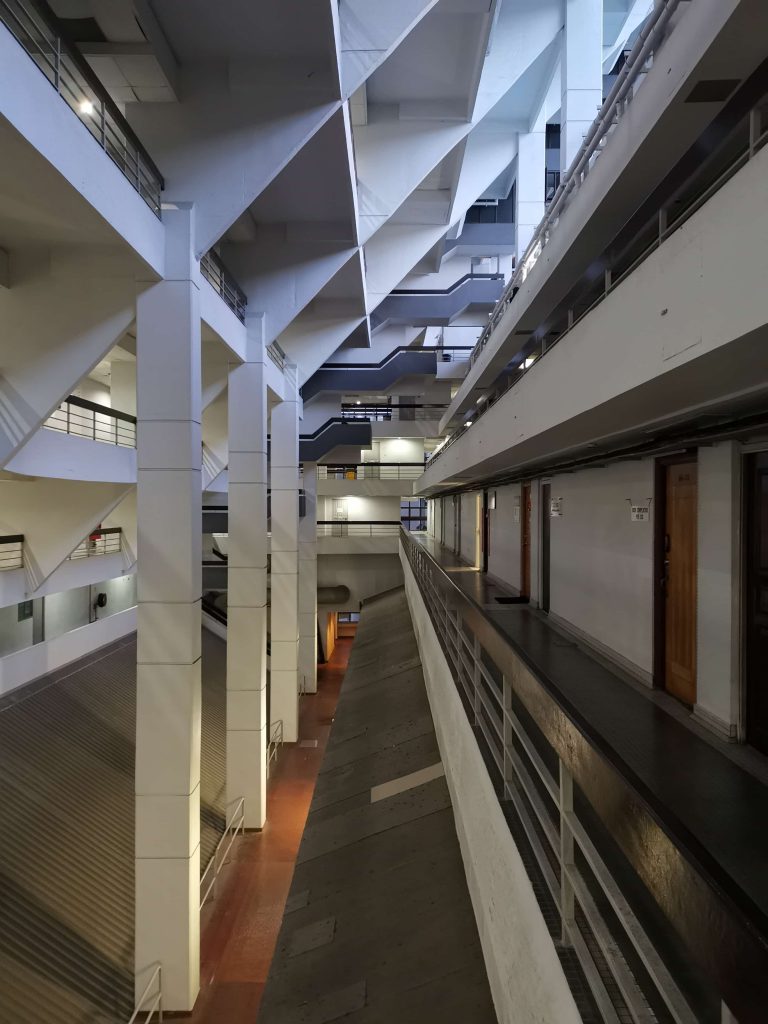 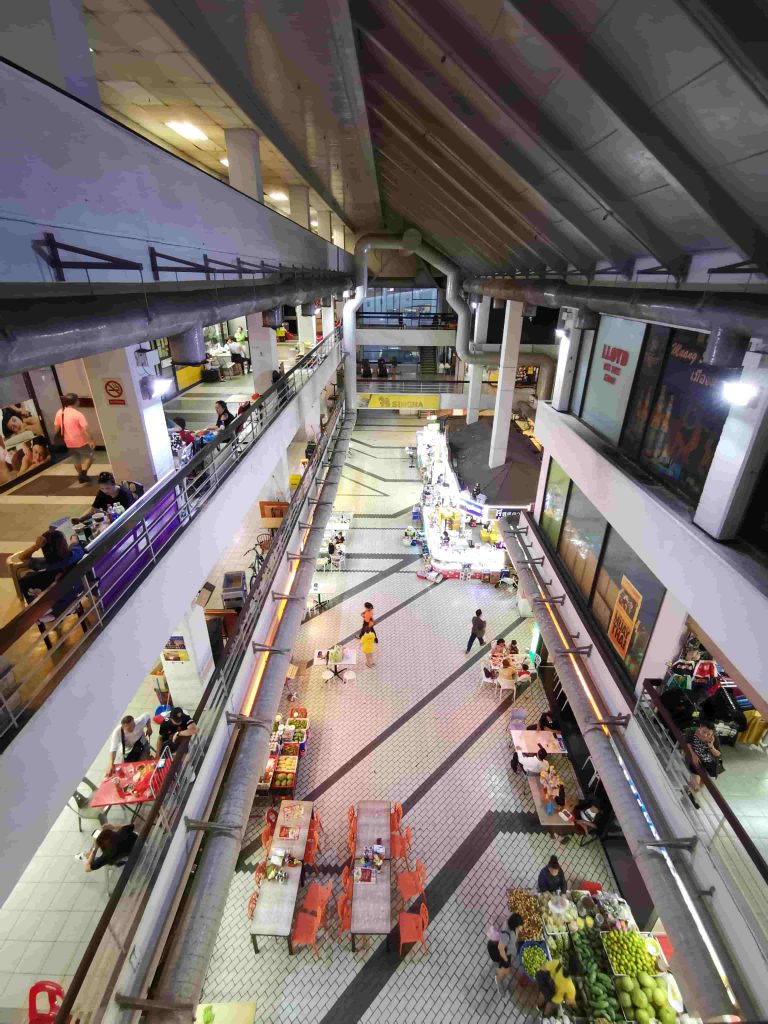 Infusion of colours and smell of Thai produce creates a juxtaposition of senses once you enter Golden Mile omplex’s retail premises. 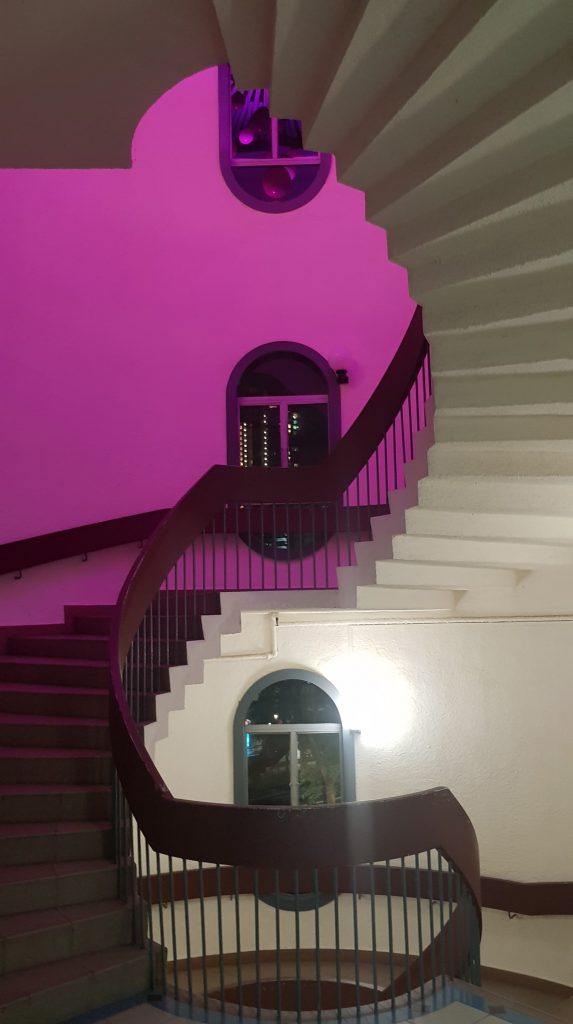 The featured spiral staircase connects all floors at the building podium, including the indie cinema,and gives a distinct characteristic to Golden Mile Tower. 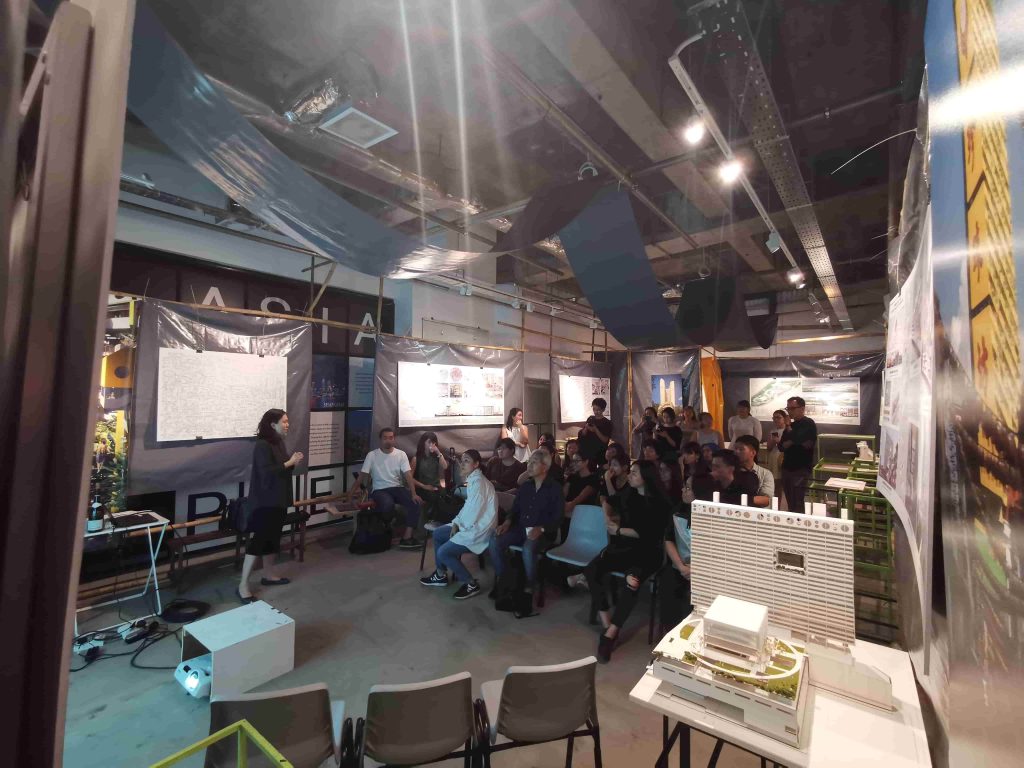 All of the participants drawn to the presentation by one of our Lighting Detectives. 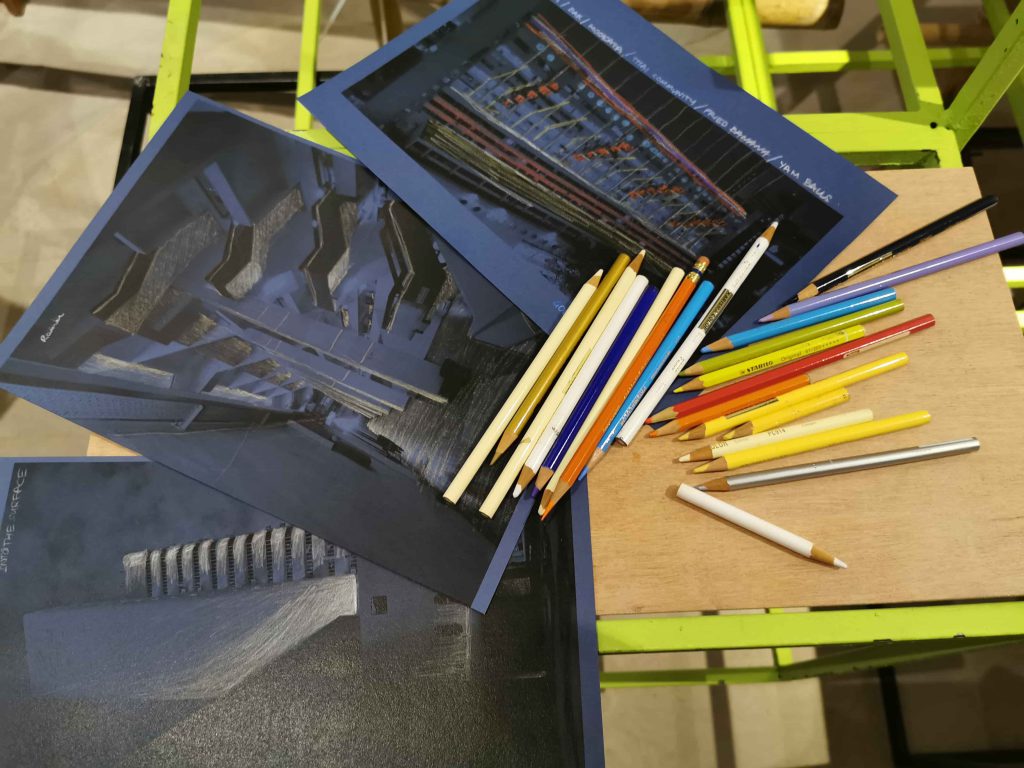 Sketches on the blue-paper and colour pencils are the Lighting Detective’s tools to express our ideas.It’s so easy simple!

As we walked down the iconic spiral staircase, we finally reached the end of the night walk. All participants were gathered inside an exhibition space at Golden Mile Tower for a workshop and discussion about the historical buildings. We began with an introduction about Lighting Detectives. Prior to the introduction, architect Randy Chan from Zarch Collaboratives took the opportunity to share his valuable knowledge and insights on both Golden Mile Complex and Tower. Randy explained the design concept of the building was to be the first mix-used building in Singapore with a live-work-play concept, how it was designed to be monumental and massive in scale, and how it evolved to be one of the biggest space for Thai community in Singapore.

Furthermore, he also shared the current issues and challenges in preserving the iconic and historic buildings, and the efforts to gain government and public support on the conservation project.

The workshop continues to the next session where we engaged everyone to participate. We started to re-imagine how the two iconic buildings would look like in different lighting schemes. By using the building images that are printed on the blue-paper and coloured pencils, all Detectives immediately poured the bright ideas in their mind into the sketches. Everyone was given a brief time to share the ideas that they have drawn, their impression and opinion on the architecture, as well as their expectation in the future.

Majority of us agree that the buildings should be preserved as much as possible since they have become iconic to Singapore cityscape. Some of us also expressed that lighting could contribute to make the building looks more attractive, either by using a subtle lighting design or a bold and daring solution. Nevertheless, it was very interesting to see various opinions and expressions. it was a memorable experience for all of us to be able to observe the iconic buildings closely and to re-imagine a different perception of the buildings through lighting. Special thanks to Randy Chan for supporting this event, and to the building management team for allowing the permission.

In the near future, we are planning to have a follow-up event to light-up Golden Mile Complex and Golden Mile Tower. Stay tuned! (Niken Wulandari Sutanto)

9 November 2005 Akihabara, home of the latest and greatest in electronic technology, is not just a place for the “otaku” any more. While the “super-nerds” scour the electronic stores for the newest gadget, urban redevelopment is re-shaping …

2011.10.22 Experiencing dark & Light Up Ninja Experiencing Time Travel and Akari Workshop Edo-Tokyo Open-air Architectural Museum is located in Kodaira-city. In the museum, there are 30 buildings from edo-period that have been relocate…

It is an island of light floating in the desert. Lighting technology in Las Vegas is not sedentary, but reinventing itself daily. How can we seize the inviting eyes of visitors? What is attractive lighting? In this place, day is night and n…

Kobe, very similar to the port town of Yokohama, is full of great spaces for pedestrians, including, the main strip, Flower Road, many arcades, underground passages, and the Kobe Meriken Park. While most of the lights in this area are white…