Geylang Serai is one of the oldest Malay settlements in Singapore. The significance of early Geylang Serai lies not in its architectural features but in its reputation as the Malay emporium of Singapore, known to Malays in the Malay Archipelago including Malaya, Brunei and Indonesia. 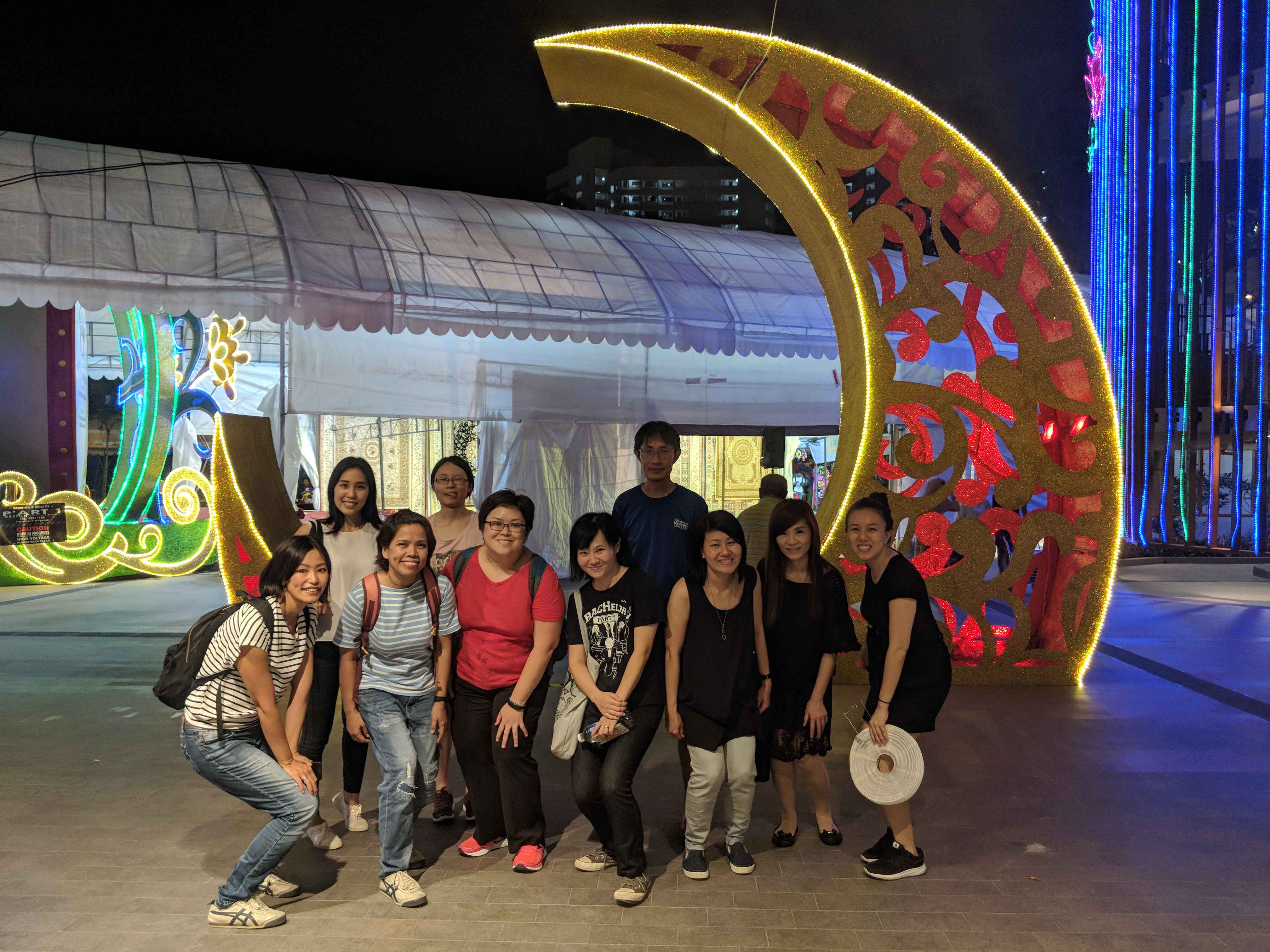 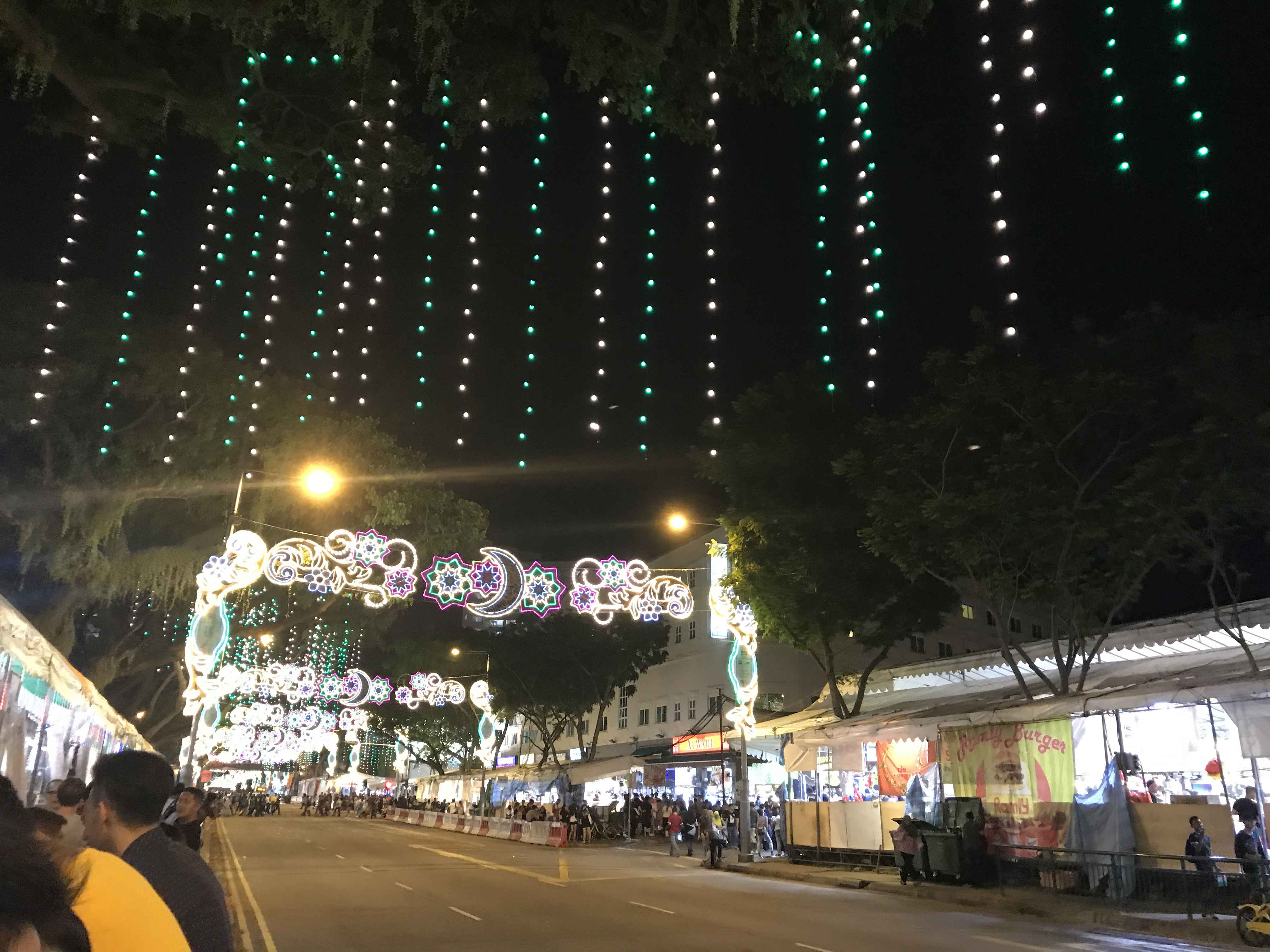 Festive Lighting at the main street between Eunos and Paya Lebar. 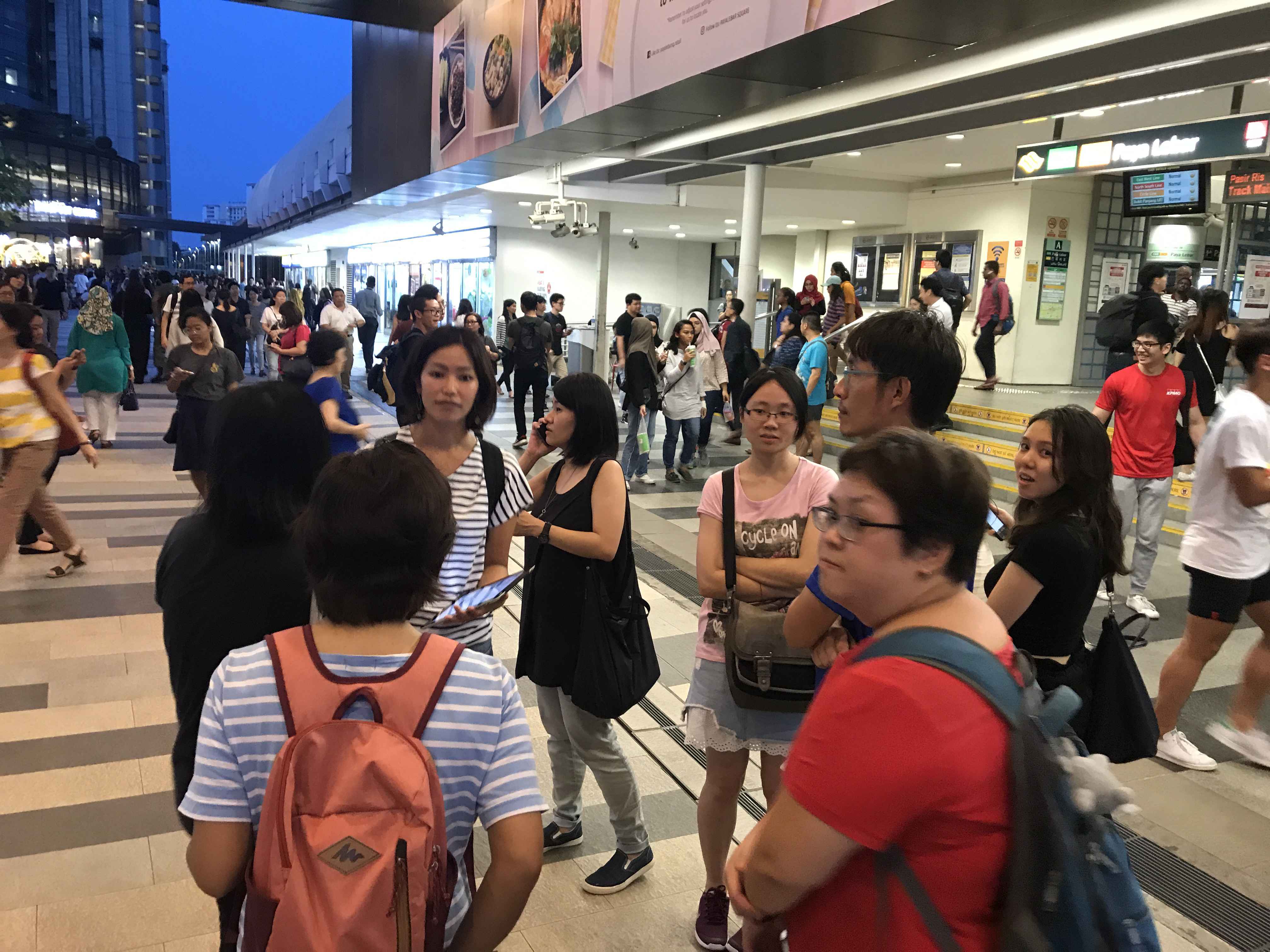 Gathering attendees at the crowded square outside the MRT station. 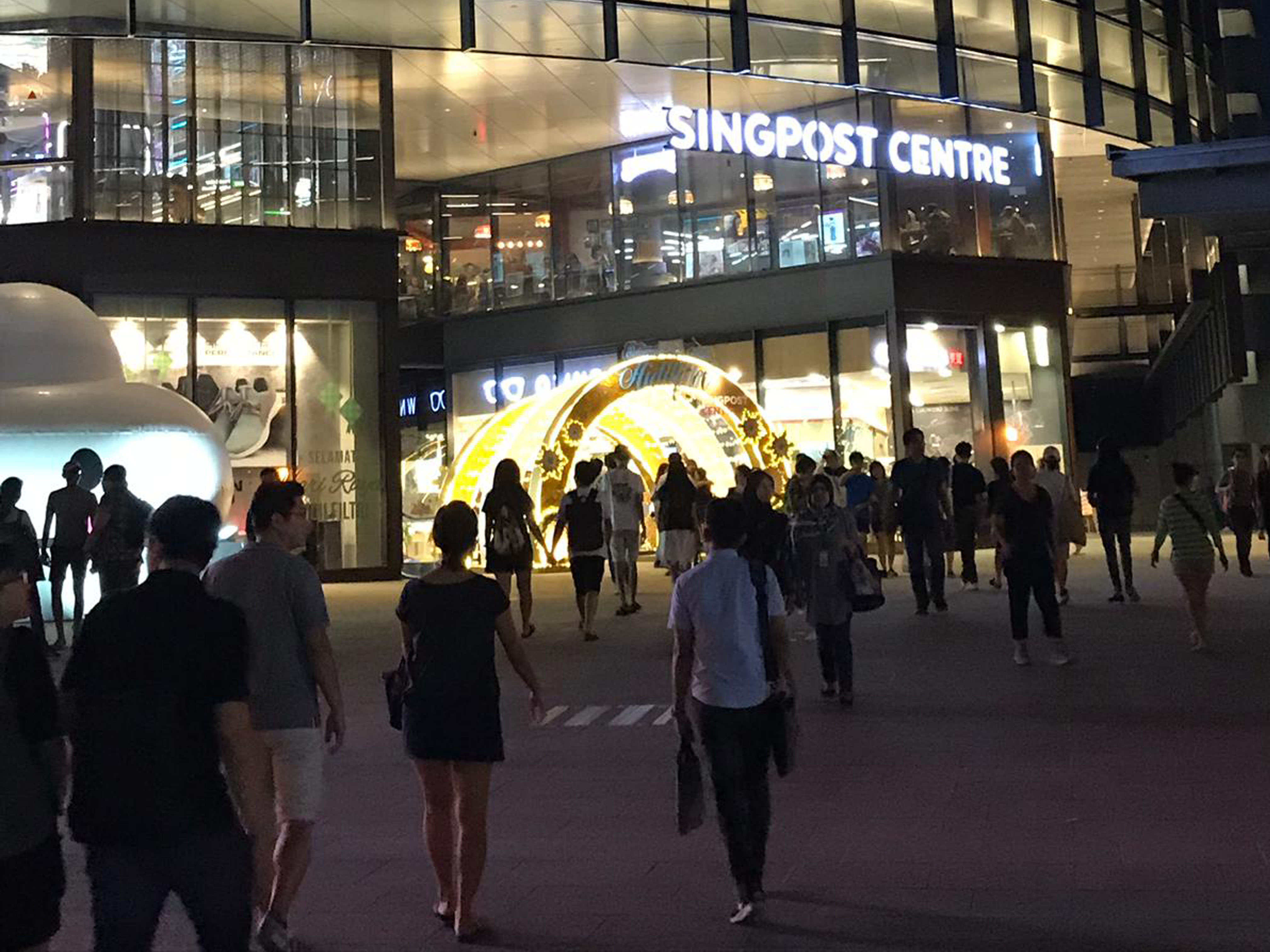 ■Singapore Night Walk No.2
– Street Culture: Geylang
A week before Hari Raya Aidilfitri, Lighting Detectives set out to see what the hustle and bustle in Geylang Serai was all about. The heart of the festival was set in the eastern fringe of Singapore. Boasting more than 800 stalls selling food, drink and wares, this old Malay settlement was swarming with hordes of people soaking in the festivities.
We had 7 participants from the public meet at Paya Lebar Exit A at 1900h on Friday 8th June 2018. It was extremely crowded and we had a tough time looking to gather the attendees. After introductions, we set out to survey the open plaza area between the new malls at the station.
Singpost Center had a structure at the entrance in celebration of the festival, despite it being out of the Malay village. There were no landscape fixtures specially to illuminate the large open plaza, but spill light from the media screens and retail shopfronts were enough to make the area feel safe. The media screen was given a Hero! rating by participants due to its colourful content. Some festive lighting at entrance of the shopping mall gave the participants different feelings: “out of place” but also “good function as attraction”.
The landscape area leading to the main festive area was full of glary lighting due to landscape lighting as well as floodlights from the adjacent construction sites, making it difficult to keep track of faces in the moving sea of people.
Residential areas nearby also exuded a different vibe despite them being only separated by a road. The one closer to the festive area displayed an ethnic coupled with the new cultural heritage hub Wisma Geylang Serai, the entire area was an unfamiliar sight to everyone in the group. We were greeted with a small scale theme park and less crowded tents of stalls. numerous floodlights at the theme park and in the tents. Flood lights from the night market where you can find a variety of foods, products, and amusement rides for kids. The combination of fairy-lights, moving gobo projectors and architectural lighting all in one area gave it a “rojak” feel as quoted by one of the participants. Cheap LED flood lights with white color light was hung in every grid, and give day-like brightness in the market. “It used be dimmer and warmer color”, said one of participants, recalling her memory in the past decade. 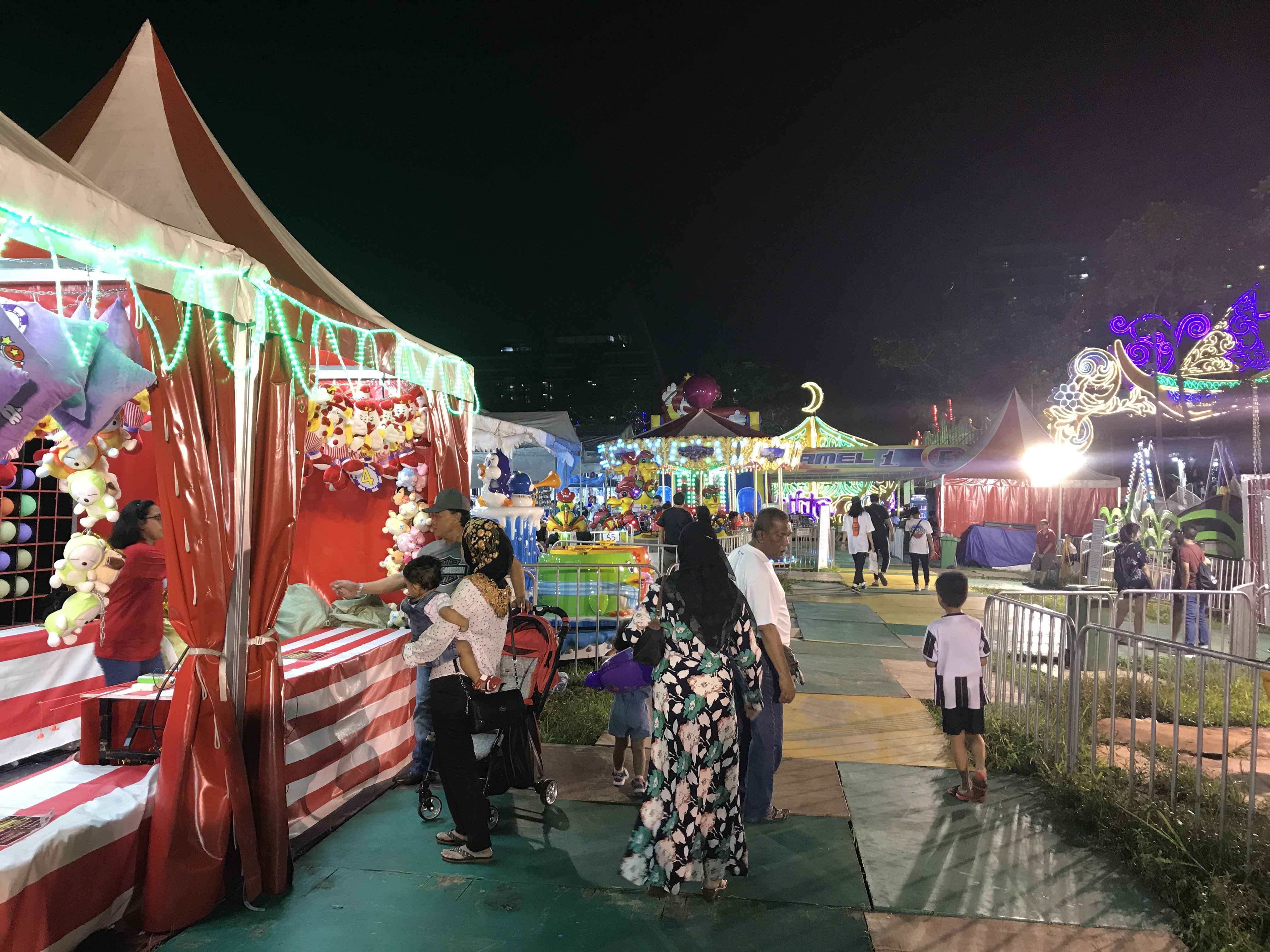 We were very surprised at the amount of light and careless for glare from lighting fixtures.
One attendee felt that there were too many white lights under the tentage, making it look dull and serious, whilst Sunyoung thought that the lights complemented the other tent with it was angled to pick up the texture of the draperies.
The main street where repetitive banner decorations were spanning emphasised the lively atmosphere for motorists driving through the area. It also served as a cautionary warning for cars to slow down in the event of pedestrians illegally crossing the roads.
The unique celebratory ambience was definitely made up of multi-coloured linear lights and spill from the huge tentages set up for the multitude of stalls. 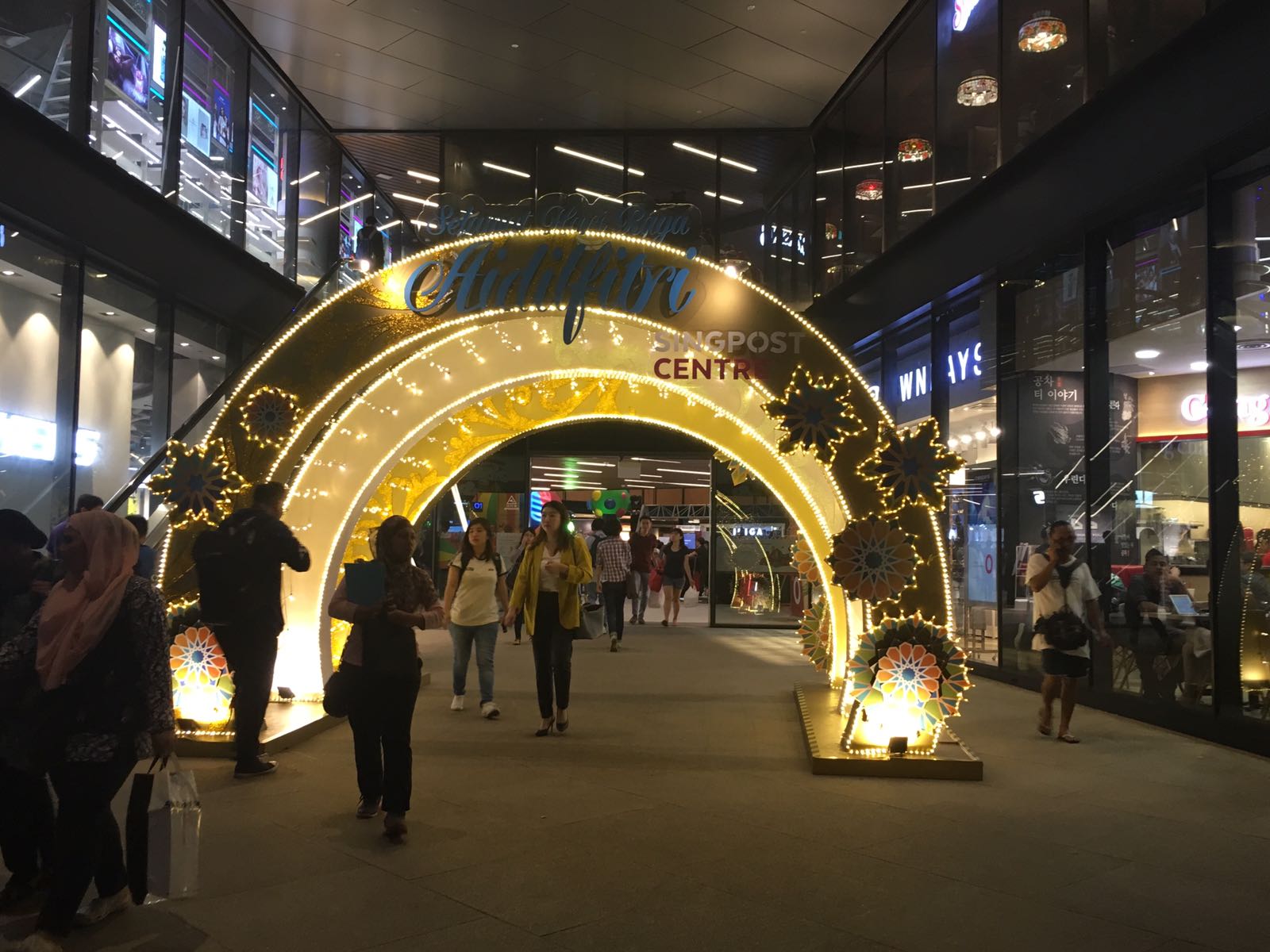 Shopfront festive lighting, both a Hero for attractive colours and Villain for irrelevance to the entrance of the mall. 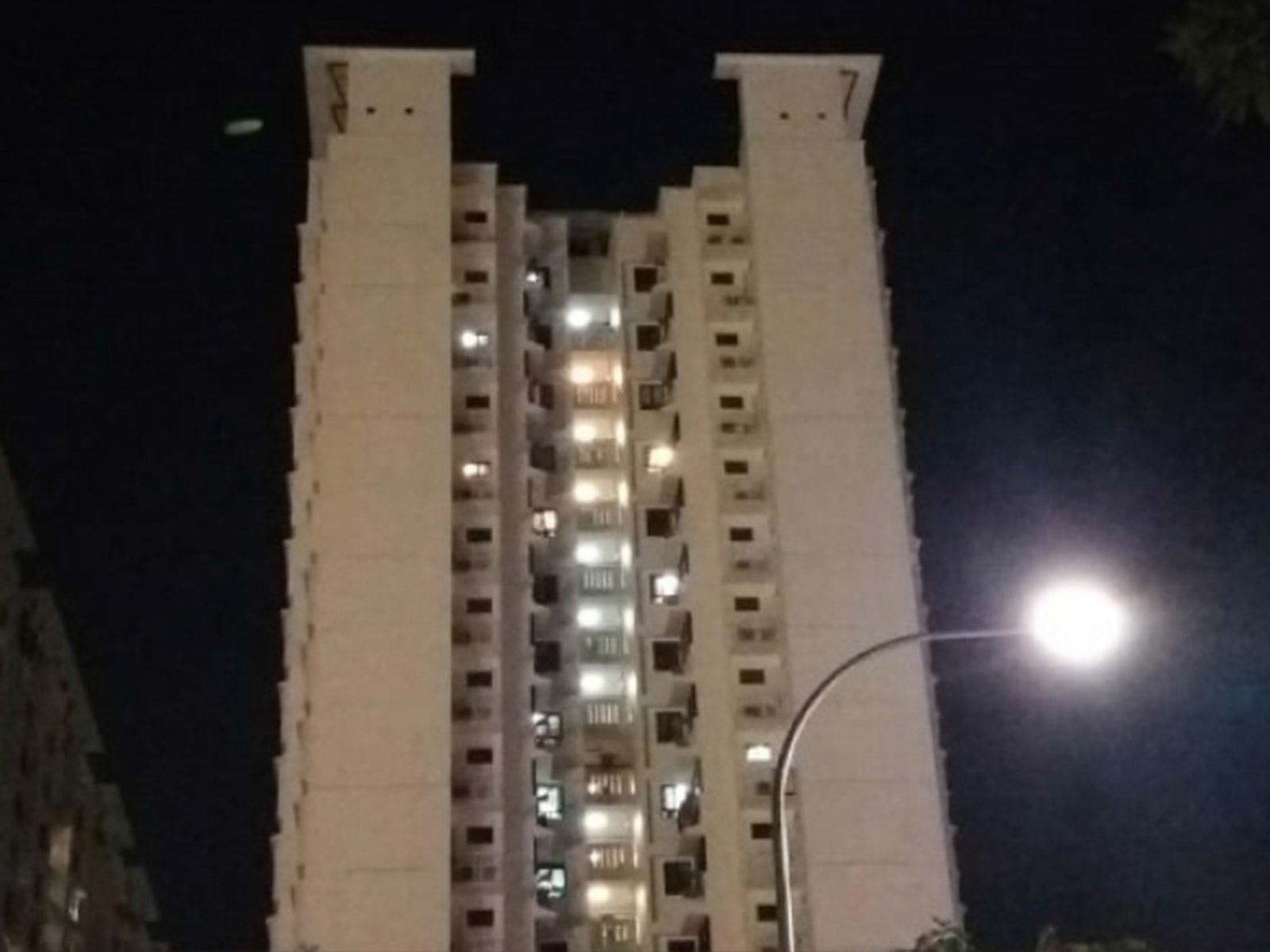 Light spill onto the facade of the nearby residential housing from the night market, Villain! 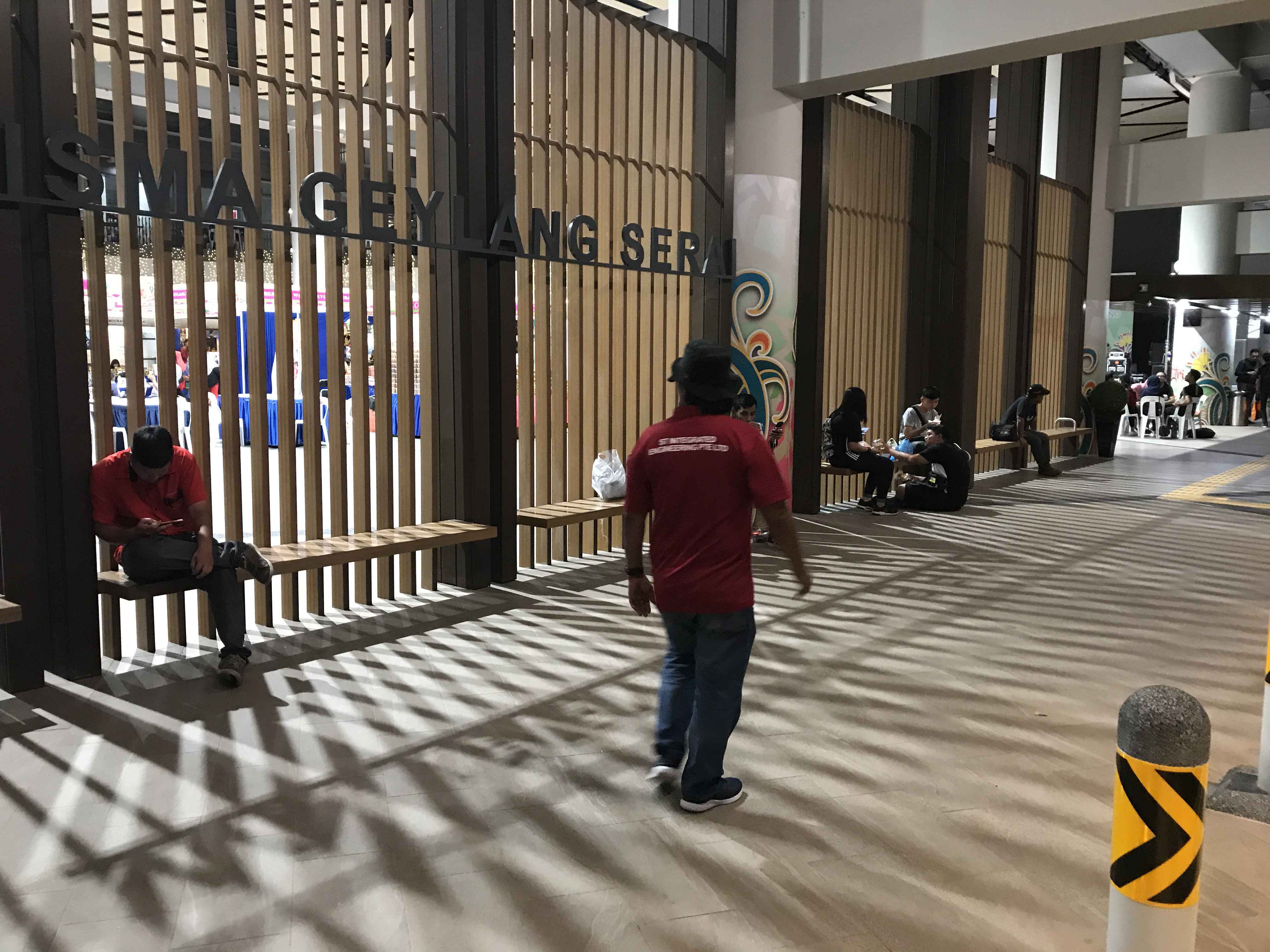 Nice rhythmic pattern made by the shadows of facade fins at the drop-off of Wisma Geylang; Hero! 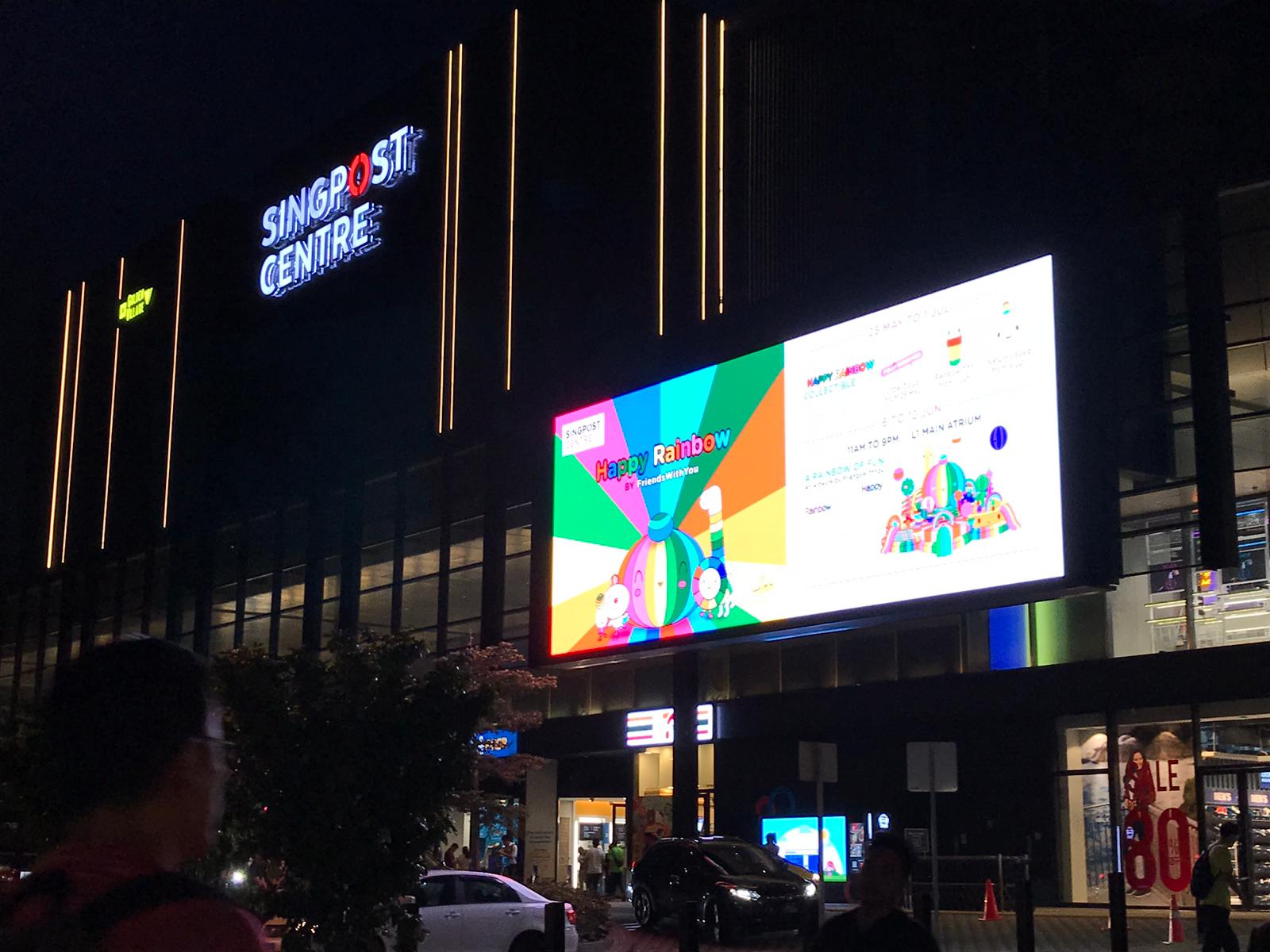 Media screen that lights up the entire open plaza, a Hero! 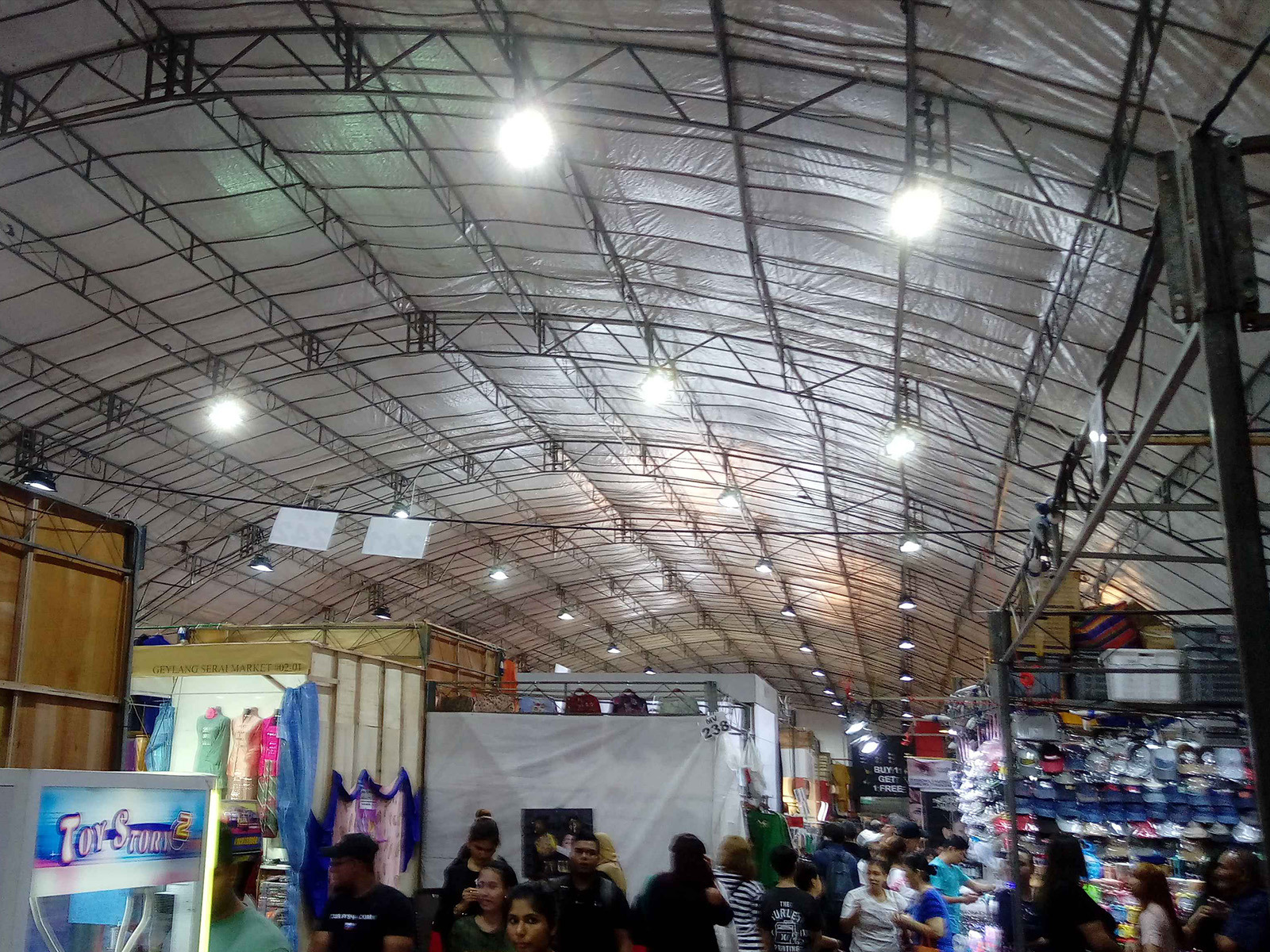 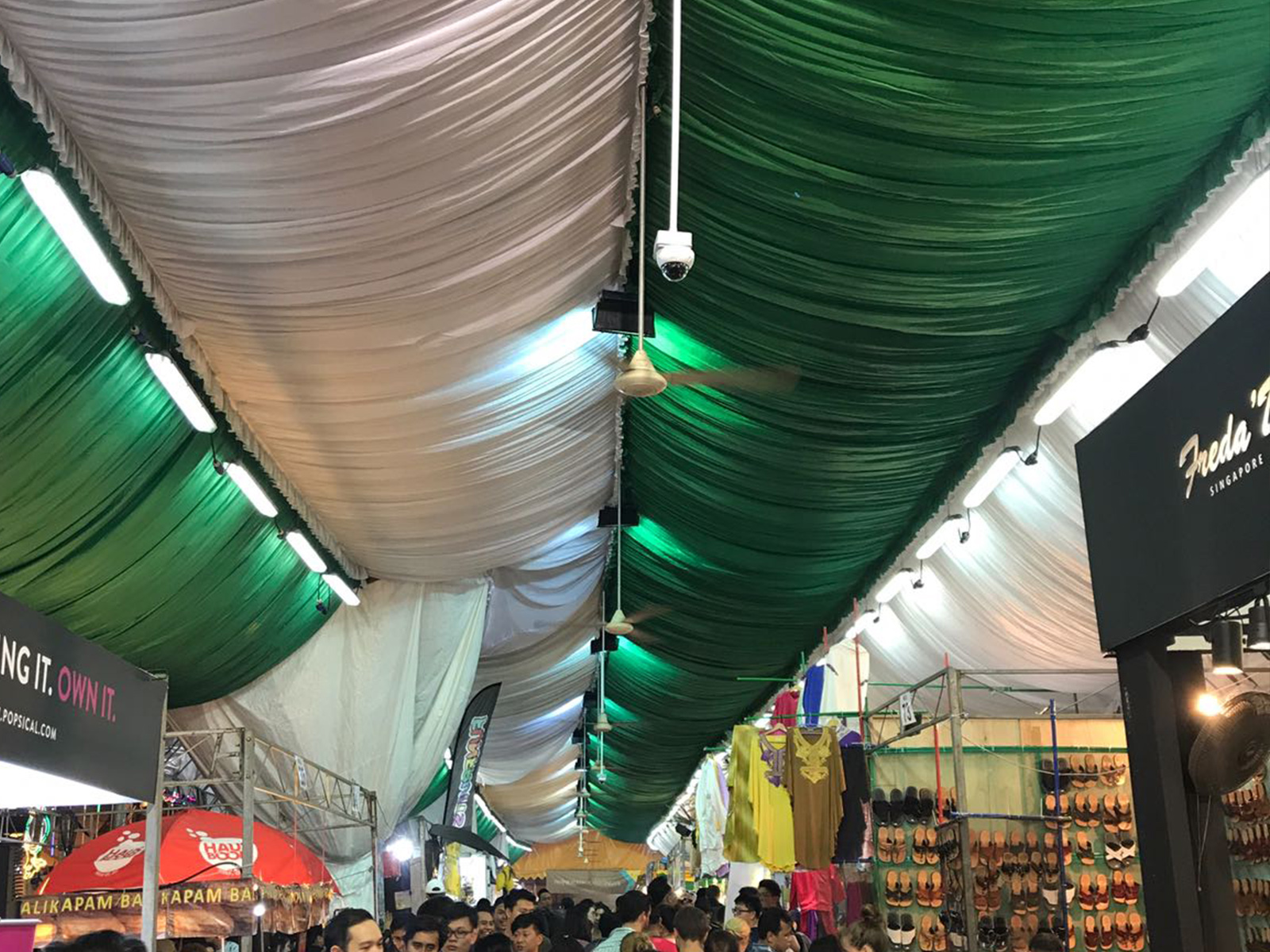 Combination of LED flood lights and linear LED tube light that becomes a Hero for picking up fabric texture. 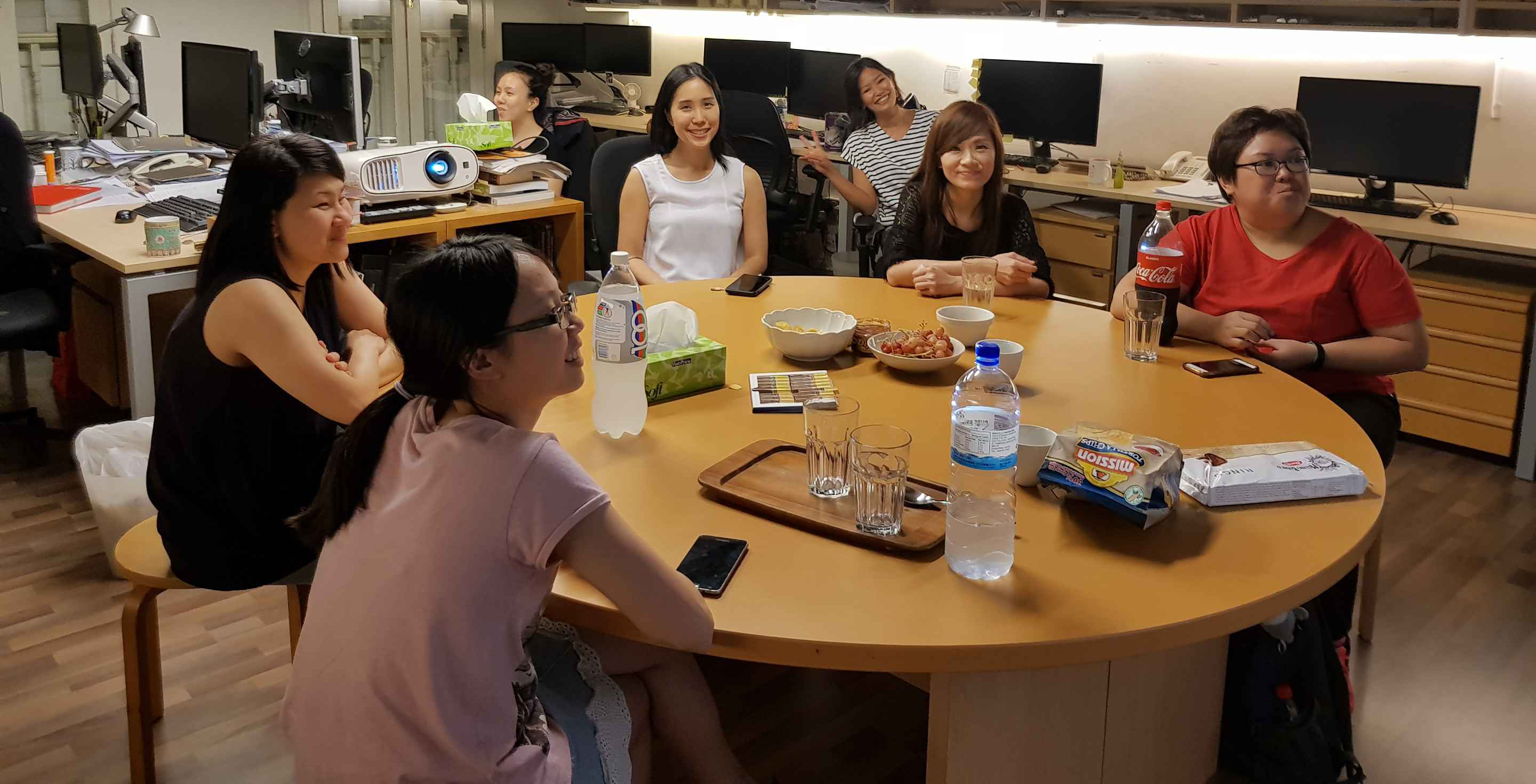 ■1st Salon in LPA office
We were a small group of 7 that attended the first salon discussion after the walk! Despite the small number, it was more effective than we imagined. It was a casual but fruitful discussion that lasted for approximately half an hour. Feedback was highly positive and we are looking forward to more Salon sessions in the future!

June 21, 2008 Sumer Solstice This was the 5th Annual Candlenight along Omotesando since the event was moved from nearby Cat Street. “Turn off the lights and take it slow” is the catch phrase for this familiar candle event. Two Japanese envi…