In search for a festival of lights in Japan, we headed to the Winter festival at Oouchijuku. Our 19 members headed north from Tokyo towards a fantastical view of snow and the lights of the old villages houses. 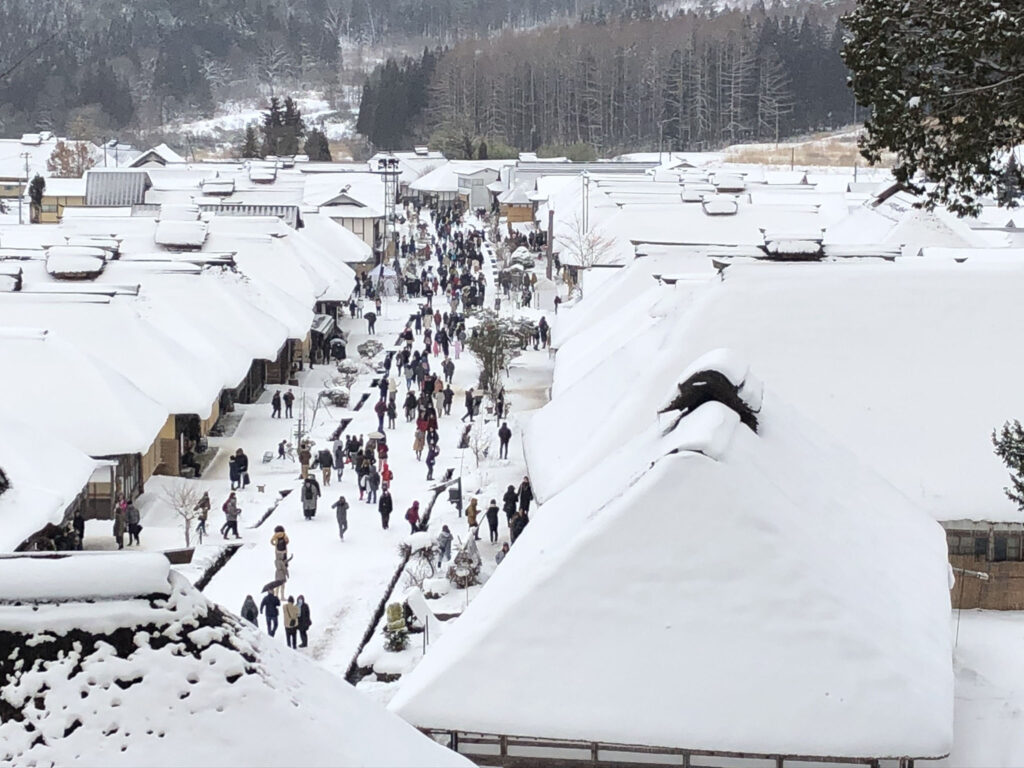 Looking down on Oouchijuku, we were lucky it started snowing the day before, barely creating a beautiful snowscape 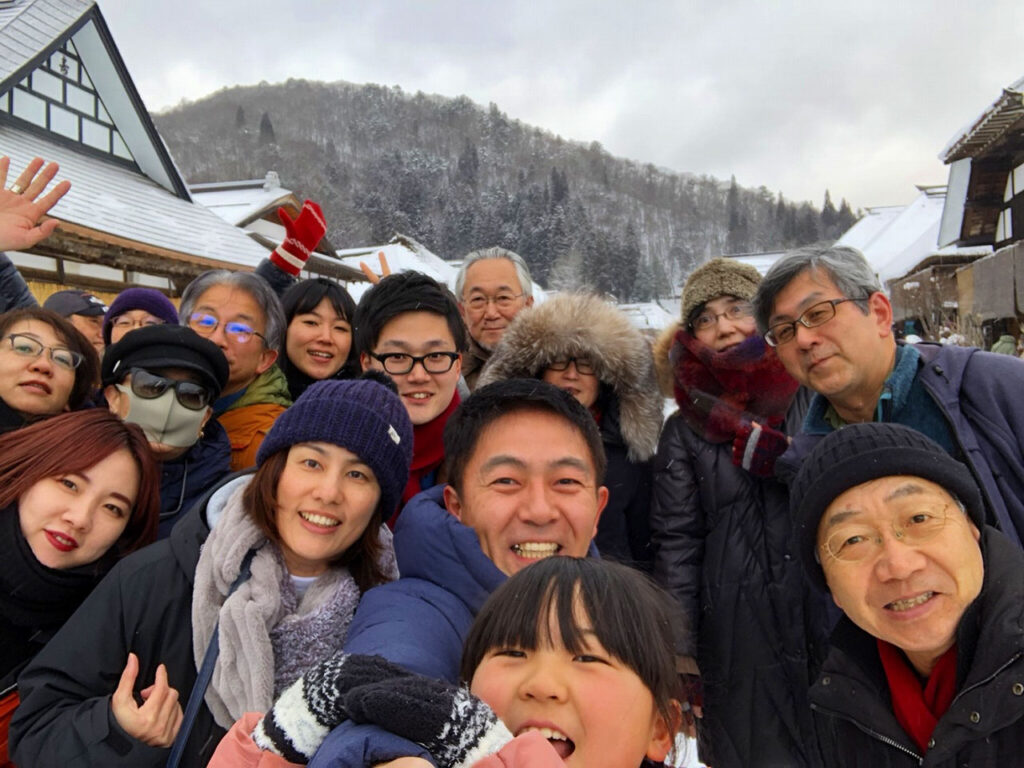 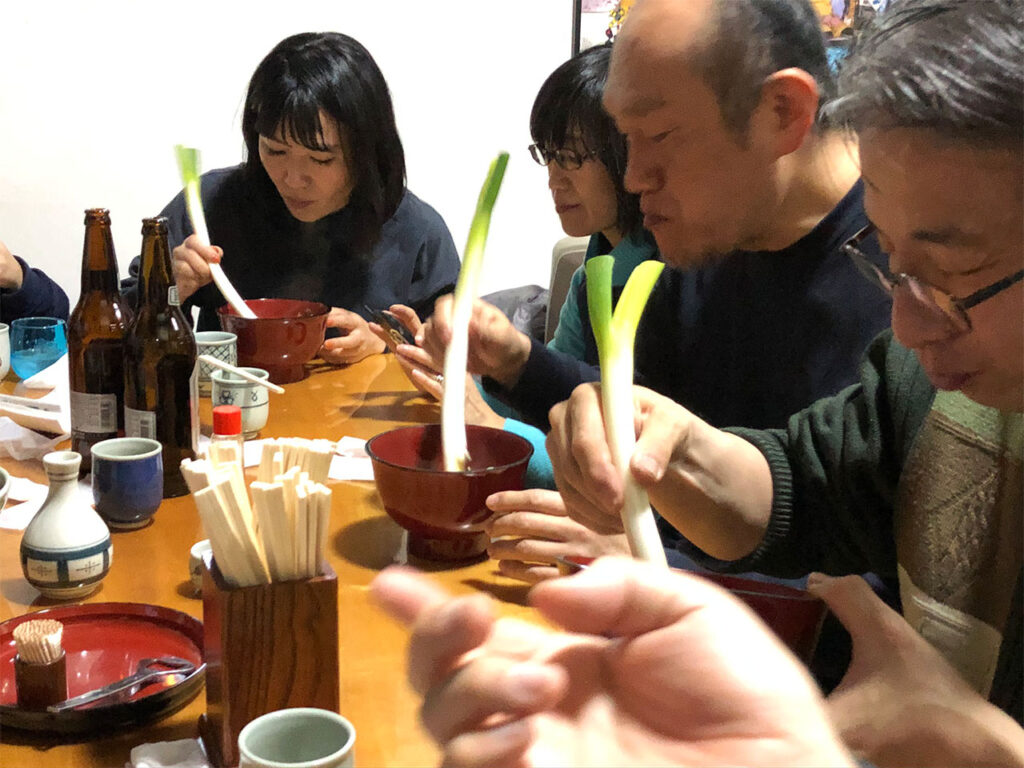 Located in South Aizu in Fukushima Prefecture, Oouchijuku prospered as a passing town on route from Nikkou to Wakamatsu in Aizu. It is a beautiful town, designated as an architectural cultural heritage, where cottages with thatched rooves still stand.

Our Night-watching tour planning committee, after lots of investigation decided upon this Winter Festival in Oouchijuku. Let us find out if we were able to glimpse the view we were promised!

The theme of this tour is “Let’s go look at lights on the snow-scape!”.

Our goal for this tour was to go see the glimpse of warm light spilling out from cottages buried in the snow or as we like to think “THE Japanese Snow-scape and Cottage lighting”, but sadly this winter was an abnormally warm winter. It had not snowed even a week before the planned date for the tour.

A lot of the festivals were cancelled or shrunk in scale, resulting the Oouchijuku tourism board inquiring us about whether we wanted to continue with the trip, causing some stressful days of waiting.

While I watched the Livefeed camera set up in Oouchijuku with our new staff spearheading this tour, Watanabe, and I recollected about when we flew to Hachijo Island only to fly back because of the clouds that enveloped the island (VOL.81) or when we couldn’t see the stars because of fog in Achi village (VOL91), reminding me about the difficulty of planning with nature working against you. However, we were extremely lucky that it had started snowing the day before the tour to an extent where even the thatched roofing was covered in snow, and we gathered at Tokyo station. 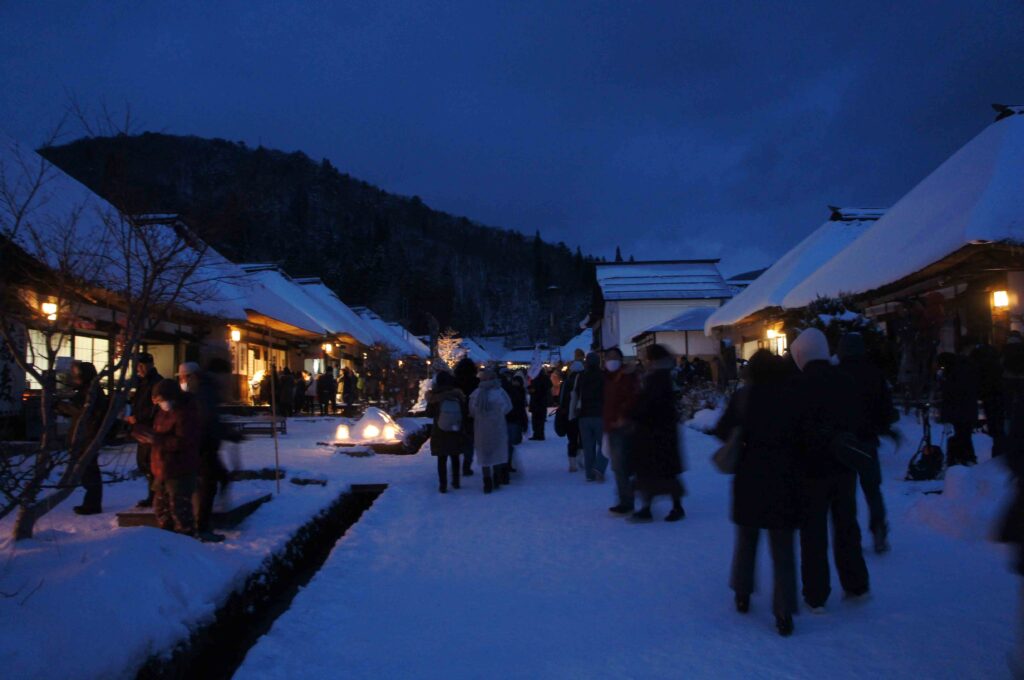 As the sky darkened, light seeped out of the townhouses and the Snow lanterns were lit

Our 19 participating members of the tour gathered at Tokyo station to take the bullet train to Kouriyamashi. There, we received the local delicacy Noriben (Dried Seaweed lunchbox), and ate on the bus. Without much traffic or trouble, we were able to arrive at Oouchijuku.

The cottages weren’t buried in snow per say but we were all satisfied to see the cottages that bring the taste of our old cultural heritage to the modern world.

We decided to look upon the village as a whole from atop a hill. With no modern buildings, it was as if the landscape had slipped back in time to the Edo-period. At the same time, I felt the painstaking work that goes into maintaining and passing this view down for the next generation. To maintain these cottages you have to gain money, and to gain money you have to advertise and create events that would attract tourists. Overdo it and you lose the old timey flavor that is your selling point. I can only imagine how much trial and error they had to do while threading this fine line. 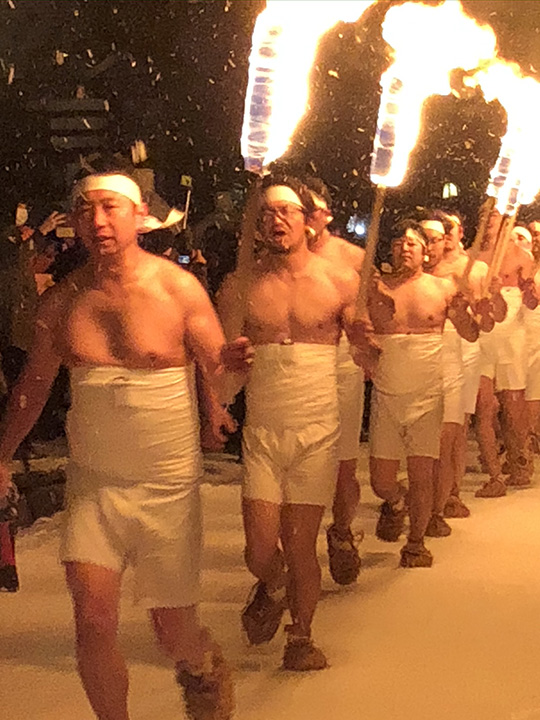 Our team explored the village, ate some local cuisine of Negisoba (Green Onion Buckwheat noodle) and waited for our snow festival until sundown.As the sun set, the cottages lit up one after another, immediately heightening the mood of the festival. Lanterns made out of snow were lit and the scene is set. The main event of the festival is Goshinkataika (carrying godly fire) where men cross the village holding torches with only a fundoshi on.Watching the men run with fire in the snowing night sky makes me rethink my preconceptions. It made me believe as if the fire really did have powers to cleanse the heart and veer off evil spirits.

The festival finale are fireworks that soar above the thatched rooves of the cottages. The fireworks differ from the loud and exciting ones in the summer but are rather solemn due to the snow sucking up the noise. Perhaps it might be the plain mood that seeps from the village that made it so.

There were barely any streetlights or extensive light up of the cottages, and would be very dark without the snow lanterns, but it gave us a glimpse calm nights of the village. It was a night that soothed us with the natural antiquated beauty of a view of Japan many years ago. 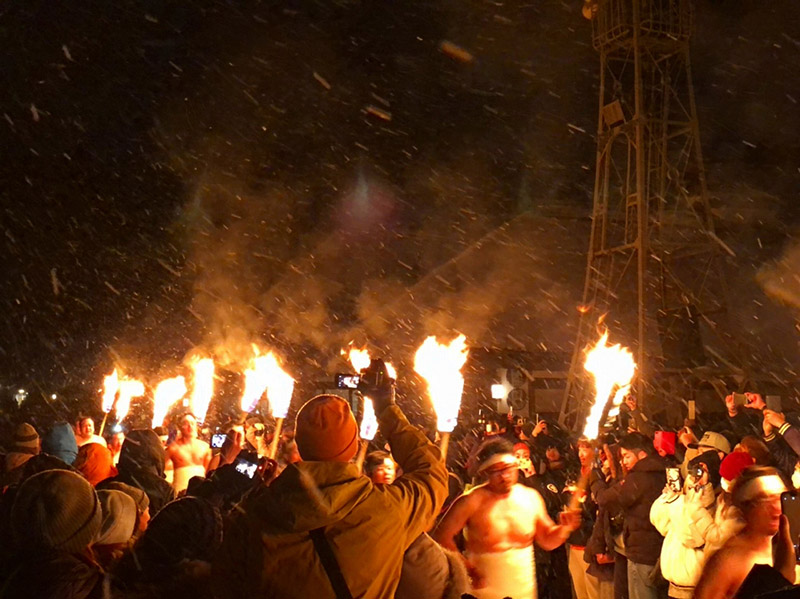 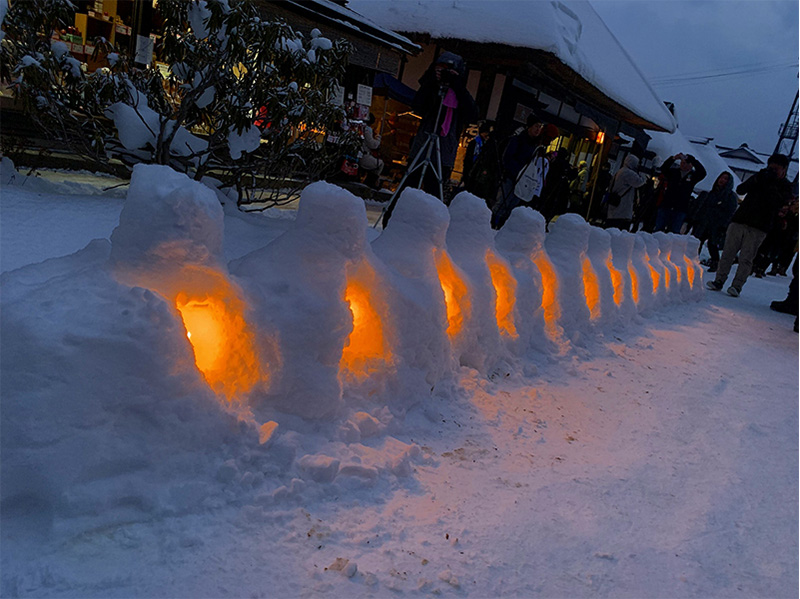 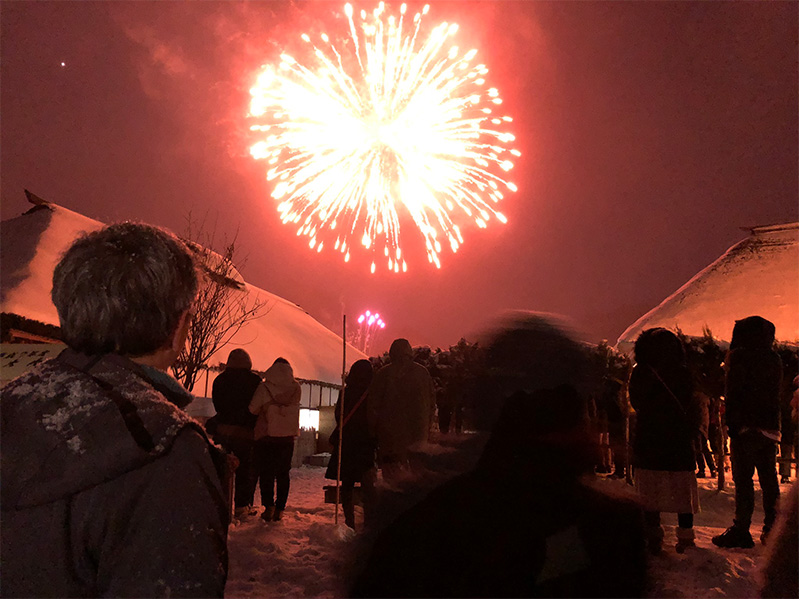 The finale to the festival: Fireworks. The loud noise of the fireworks is dampened by the snow and gives off a rather solemn demeanor in comparison to the loud and exciting fireworks in the summer. 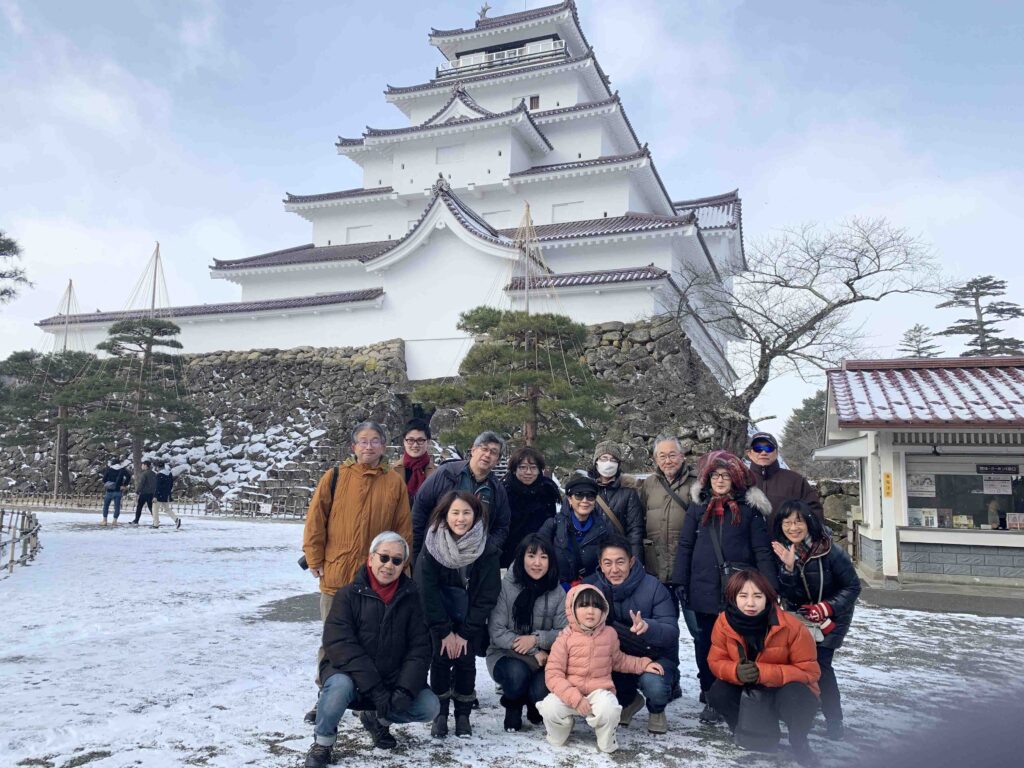 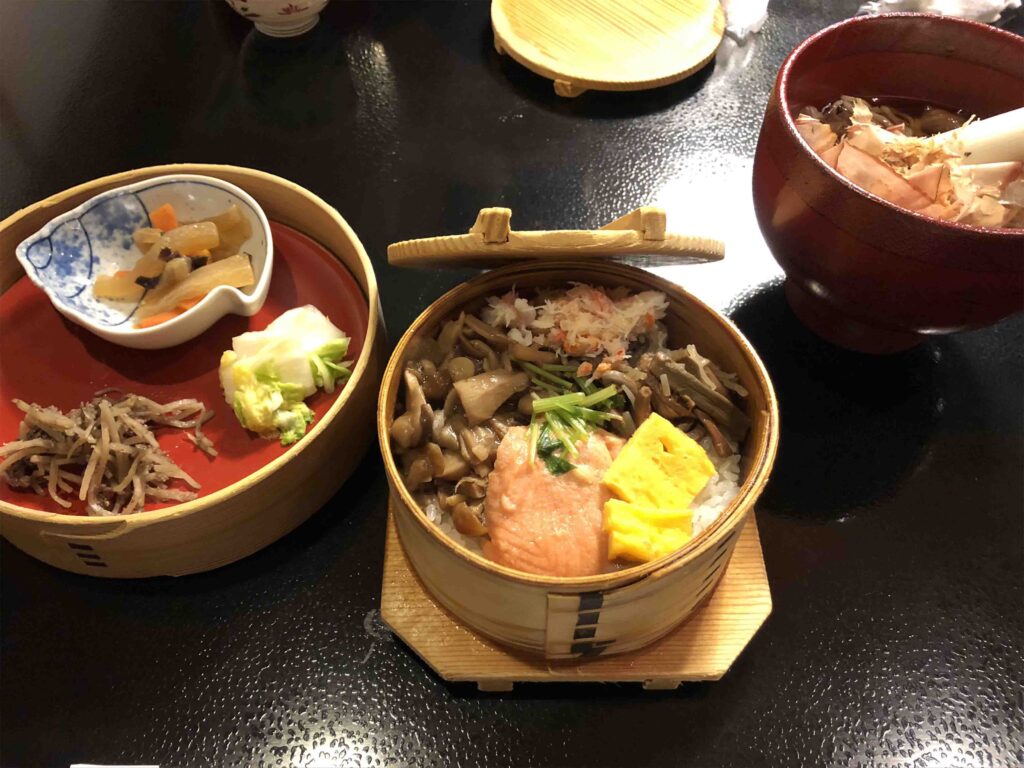 The next morning we spent in Wakamatu city in Aizu, by climbing the Tsuruga Castle, touring Nanukamachi, and enjoying the local delicacy of Wappameshi.

After lunch, we visited the other big spot on this outing – Sazaedou. It is a 16.5m tall, triple layered, hexagonal temple that was built in 1796 on Iimori Mountain. The passageway through it is a layered spiral slope that is designed to be a one-way passage. When it was built there were 33 Kannon Statues places along the slope, so you could view all 33 as you went up or down the temple and was popular among the peasants who could not afford to go to other temples.

After enjoying the snow-scape, onsen, delicious foods, and fine liquor, the team headed home. It is really a treat to get to spend time and go on trips with other individuals that appreciate architecture and lighting. Thank you to everyone who participated on this trip. 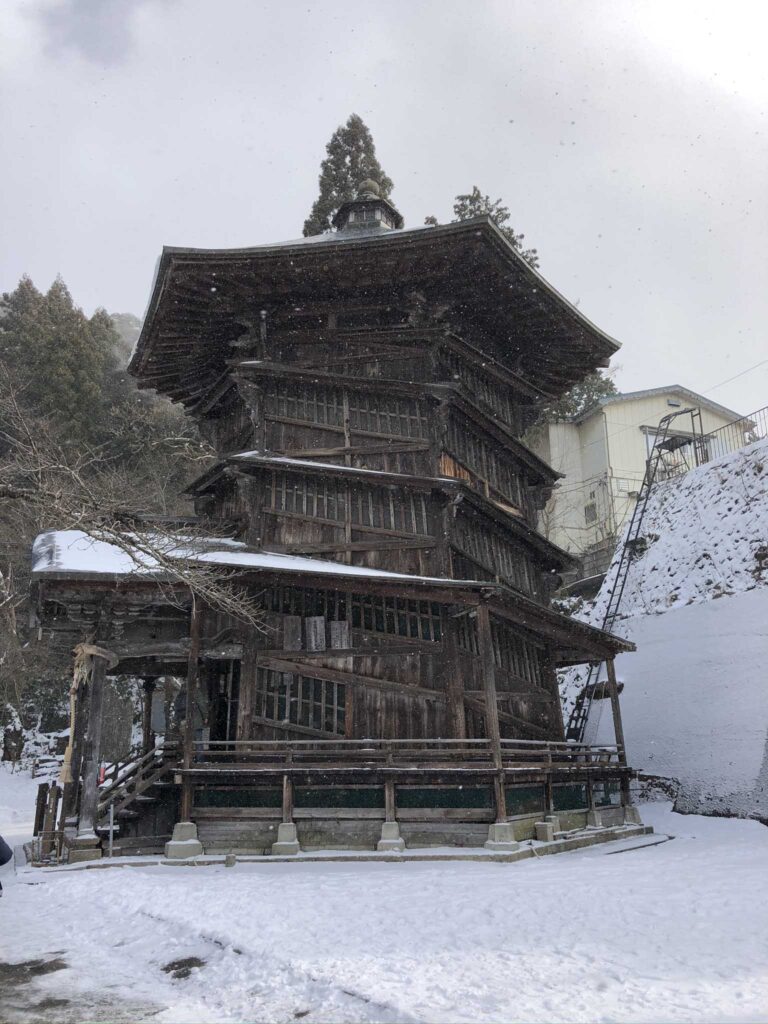 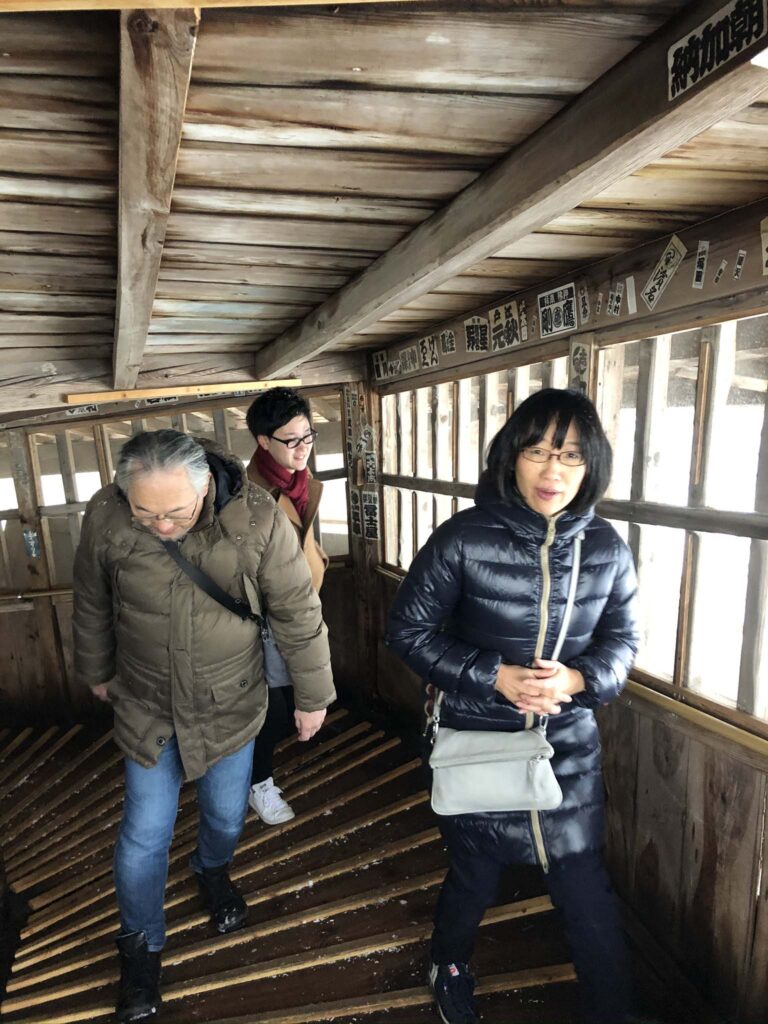 Second day – We enjoyed the Aizu specialties of Tsurugajo, Sazaedou, and Wappameshi

Night-Watching Tour is an annual event where we go on a trip looking for experiences with light we cannot get in Tokyo. If you have any suggestions or information, please reach out to our office! Please look forward to our next event!   (Noriko Higashi)

Putrajaya has been developed as the new center for government since its functional move from the former capital Kuala Lumpur. The city planning is very representative of the nation’s authority and symbolic in nature with a very elaborate li…