For our 64th Stroll about town, we explored the Tokyo Nightscape using a 2 story open roof bus: Skybus. It was a great drive around town, using Skybus’ Odaiba Nightscape course.
While we started the event with some concerns about bad weather, but luckily we were able to enjoy a beautiful summer night drive. 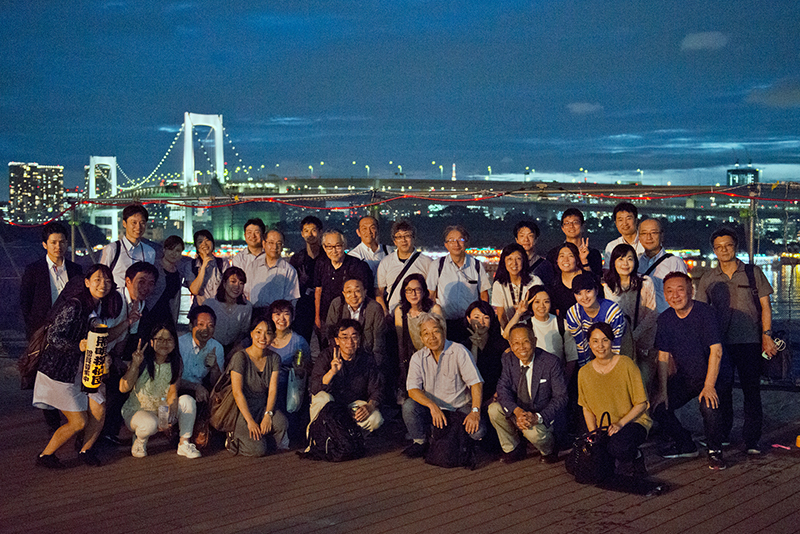 A group photo at Odaiba with the rainbow bridge behind us

Skybus The Significance of the Skybus tour 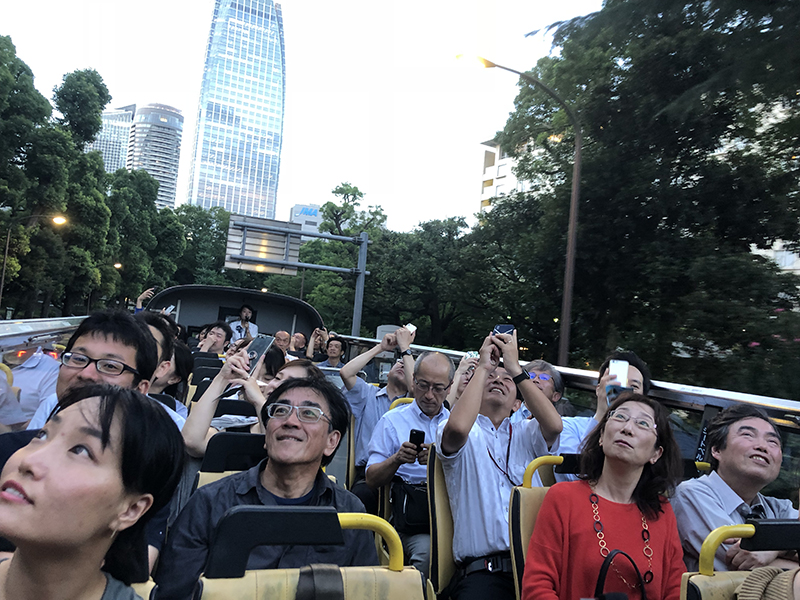 We started before it got dark 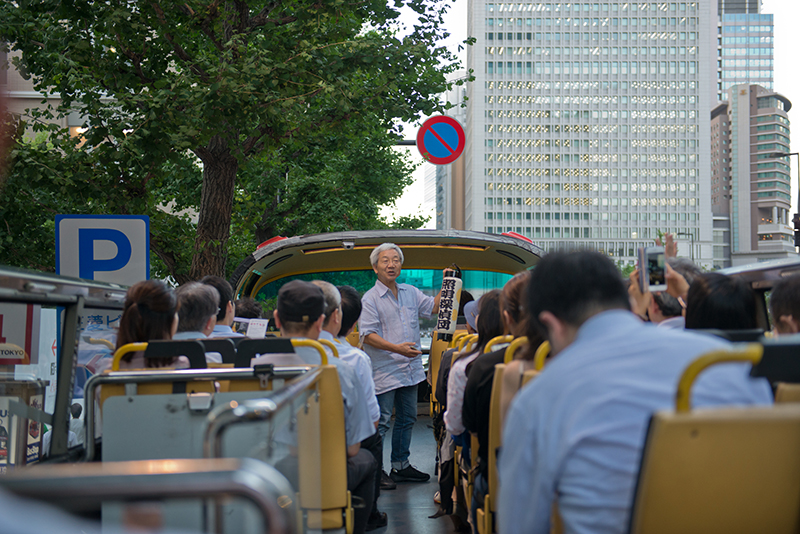 Chief Mende-san explaining the point of the bus tour 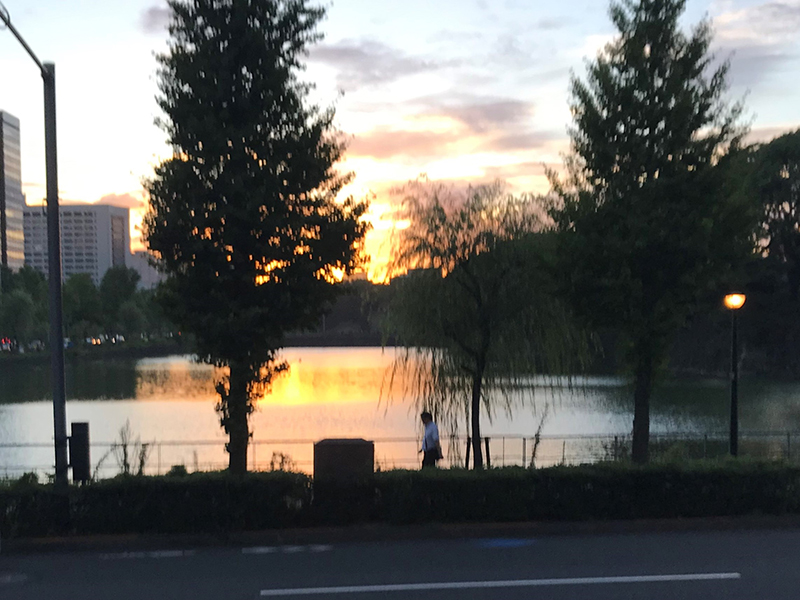 The sunset setting upon the emperor’s residence

Under the theme of ‘Rediscovering the nightscape of Tokyo on the Skybus!’, our members all explored the nightscape of Tokyo from a height of 3.8m off the ground.
Our route was Tokyo Station → Oukyo (Emperor’s residence) → Tokyo Tower → Shuto Highway → Rainbow Bridge → Odaiba → Shuto Highway → Rainbow Bridge → Tsukiji Market → Ginza → Hibiya → Marunouchi → Tokyo Station
The lighting detectives also held the same event in 2013, but as the 2020 Olympics/Paralympics are under a year away, there are heavy development projects occurring all around Tokyo and therefore would perhaps change the nightscape of the city. We were curious to explore how the nightscape of Tokyo has changed especially after the Tsukiji market has moved completely to the Toyosu Market.
The highlight of this trip is the nightscape of Tokyo you see when you are driving on the Shuto Highway.
We enjoyed the combination of the large expansive sky, the nightscape, and the soothing wind that we could not normally enjoy on our own. The speed at which we travel is also completely different in comparison to our normal strolls and the view of the city at that speed and height gave us a completely different perspective as before.
At Odaiba, we took a 60-minute break and took a walk at Odaiba Marine Park. This area is a quiet beach right now but will have temporary constructions in order to accommodate some Olympic sporting events. Further, the athletes housing will be located at Chuoku Harumi. It seems after the games, it would be rebuilt into some high-rise apartments. On the day of exploration, it was still before the construction, so it was filled with imagining how the view would be after the buildings were built.
(Anri Sato)

Reflection on the exploration

The perks of the Skybus tour is that it allows us to experience the city of Tokyo at a different speed and perspective. It seems that even if you thought that you knew Tokyo like the back of your hand, there were things that would surprise you if you were to change your perspective. 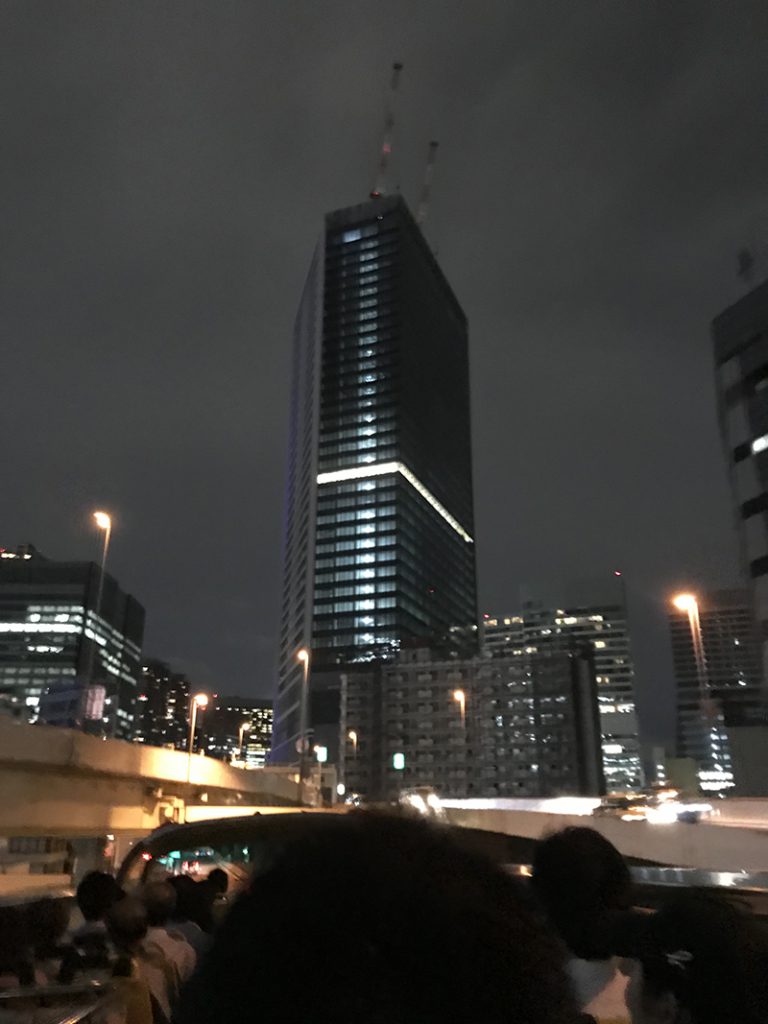 Without any trouble from the Typhoon or rain that we thought could ruin our plans, the bus started driving under the blue sky. It was still bright out when Leader Mende-san started his greetings, but we could feel the sun hitting our skin slowly change angles, slowly bringing us into the night. The sun that was setting on the emperor’s residence was beautiful. There was also a building that had their window frame structures protruding from the building, creating a nice shadow once it was hit by the sunset, creating a great balance of light and shadow.

As we approached twilight, the bus approached Tokyo Tower. We were able to look at Tokyo Tower from a very close distance, but we were able to see different sides and expressions of it as we drove around. As the sky turned a deep blue on the east and remained red on the west, the different skies gave the Tokyo Tower completely different looks and left different impressions. Enjoying these different views on the same trip was something we could only achieve with the speed that we had on the bus.
The sun had set completely when we arrived at Odaiba. The boats parked on the river reflected beautifully in the water. The airplane warning lights blinking was also beautiful. These lights that blink still often use incandescent lamps, resulting in a soft fade for its blinking. It was sort of sad to think about the change to LEDs in this case, as we would lose this special moment to the clean blinking of the LEDs. But looking it up just now, even if they replaced the incandescent bulbs with LEDs, they would do so with LEDs with the capability to replicate the slow fade of the incandescent bulbs. Perhaps they also are considering the upkeep of the nightscape while they make these decisions! If that is true, that would be amazing. 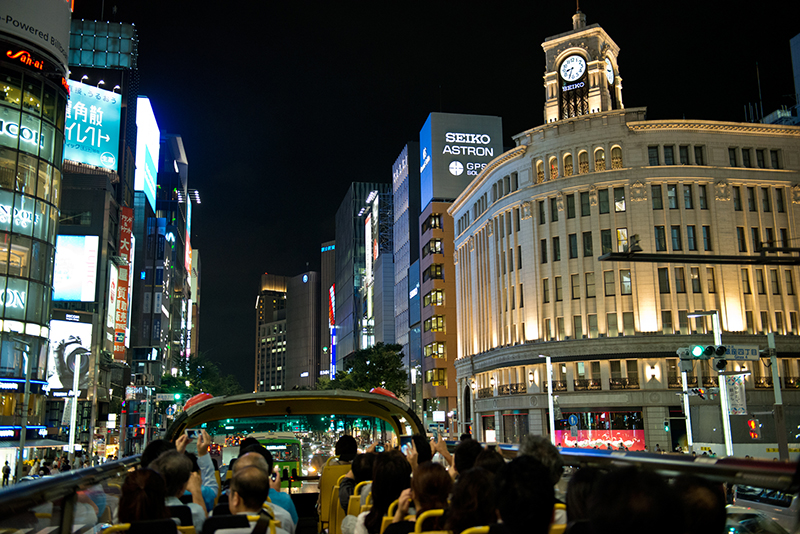 The Skybus driving through the charming Ginza nightscape 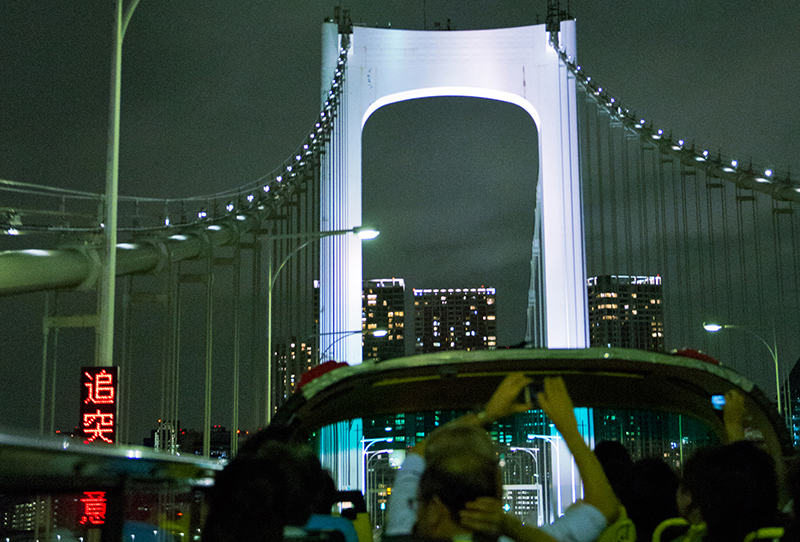 Looking up at the rainbow bridge in an open roof car

As we left Odaiba, the bus took us on the Shuto Highway once again. The night has befallen and we are now looking at a scene that better expresses the Tokyo nightscape than when we were on our way to Odaiba. As we are moving much faster than usual, the flourishing nightscape of Tokyo looks somewhat different. Suddenly, there was a building, with only one floor under construction that caught my eye. The black block of a building, with the bright Tokyo nightscape as a backdrop, has a single line of light. This was beautiful and left a lasting impression. This floor was probably the floor used by the architecture company as their office. This is probably the last bit of work till the completion of the building. It seems slightly out of place to say this view is beautiful as the workers are probably working and stressed, but I believe that the temporary nature of this view is what makes it beautiful and precious. With thoughts for those working in the building and also enjoying the view, it mesmerized me for a while.
Looking at the weather forecast, it was a miracle that it hadn’t rained by the time the bus pulled up to Tokyo Station, taking us back to where we started.
This was a trip that turned out better than expected, with many locations to take a look at and even more to discover.
We could also see the renewed Tosoyu Market and the old market that is about to be demolished. Further, Tokyo is changing in preparation for the Olympics. However, even as the city changes continuously, I felt that the people here continue to remain the same.
This was a trip that left me feeling as if changing my perspective allowed me to look at not just the changing city and nightscape but also others hard work around the city. (Mutsuro Honma) 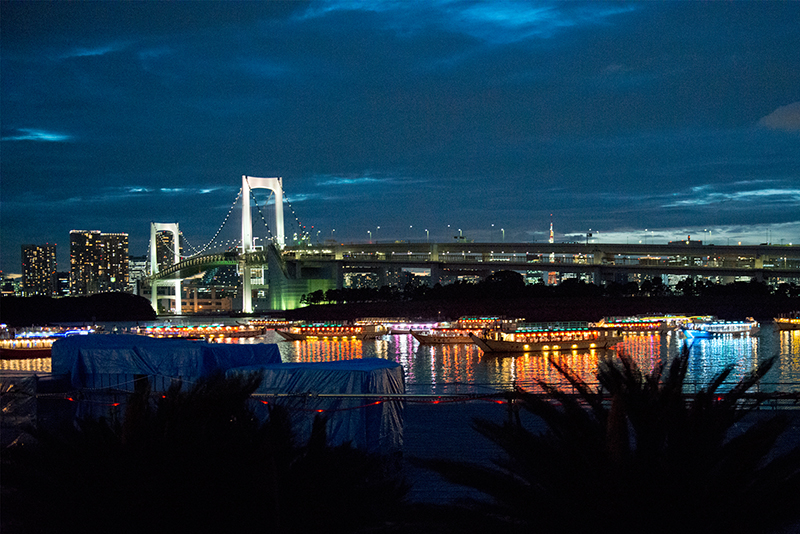 The 62nd Lighting Detectives Salon 2019.11.29 Noriko Higashi We facilitated a review of our exploration of Ikebukuro. We presented our findings as the 4 groups that explored Ikebukuro. It was a great discussion with 20 participants. Explana…