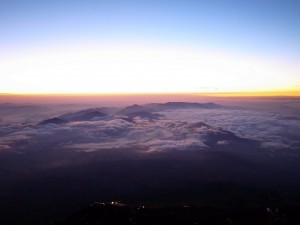 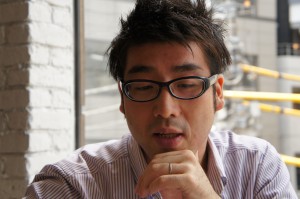 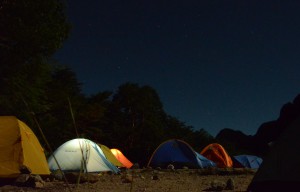 Nagatsu Today I`d like to talk about moonlight in the mountains.   I like to go mountaineering, how about you?  Do you climb mountains?

Mende I don’t have any experience climbing real mountains as you do, but  I have hired a Sherpa and gone on a 3-day trekking excursion through the Annapurna Mountains in Nepal.  We stayed in tents and the starry sky I saw when I woke up in the middle of the night brought me to tears.

Nagatsu Really!  You can get so much more from nature on an overnight trip compared to a day trip.  The gradual transition of time and the nightlife is exciting.  Whenever I go to the mountains you can almost always find me carrying a tent and plans for at least one night’s stay.  I find tenting is more versatile for night wanderings than staying in a cabin.

All of my mountaineering has been within Japan and  I have climbed the Japanese Alps from the northern regions to the south.  Every year I have a  20kg pack on my back and make a few trips to the mountains.  In the mountains, dusk is an exceptional time of day.  Only those that make the trip can really experience this time of day.  After dusk, it gradually gets darker and darker until you find yourself surrounded by the ink-black night.  Then, all of a sudden, moonlight illuminates your surroundings and you look up to find a wonderful starry-night-sky.

Mende It sounds like, after the blue moment fades, everything is wrapped in moonlight.

Nagatsu When the moon is shining, you don’t even need a headlamp to see your hands.   This is not possible in the city.   It is hard to experience moonlight in the city.

Mende Not something we can see in the city very often, that’s for sure.    In my condominium, occasionally the perfect moonlight comes shining in through my window.  As lighting designers, we should be more interested in the phenomenon of moonlight as it is felt on the ground than in the visual shape of the moon.

There are various old tales about the moon.  In western literature, the moon is associated a lot with evil, but in Japanese literature, there are beautiful stories like The Tale of the Bamboo Cutter.  Compared to sunlight, which is several tens of thousand lux, moonlight is only 0.2 lux, nevertheless, we seem to become captured in the world it weaves.

Nagatsu In terms of numbers moonlight is very, very dark, but it doesn’t feel gloomy or insidious like a very dim fluorescent light or incandescent lamp.  It is dark, but instead, you feel a little relief or certainty.

Mende That is so true, but it isn’t visual information that makes us feel this way.  I think, mentally we recognize the moon as different.  Even if we were able to artificially recreate the color temperature and brightness at 0.2 lux of moonlight, without the imprint of the image of the moon in our minds, it is not quite the same.  Moonlight is actually a blueish-white color, not a true blue.  There are so many songs about the blue moon, but people have the idea that the moon is bluer than it actually is.  Maybe because of its opaqueness.

Nagatsu For some projects, we often shine a light from up high to create shadowing and call it moonlighting effects.   I wonder if we could create shadows with color tones?  For example, in artwork shadows from moonlight often have color.  In movies, reflected light creates shadows in shades of color to emphasize different situations.   I wonder if we could recreate this in actual architectural spaces?

Mende Hummm.  I have attempted many times to mimic moonlight, but nothing beats the real thing.   Although, I am defiant! One time I was trying to be sneaky and thought, “ maybe this time I should make a deformed version on purpose”, but it is a challenge, for sure!   Maybe we should not be mimicking moonlight, but instead, focus on recreating the feelings and emotions felt by moonlight.

Nagatsu    It is important to experience, get a feel for, and sense various types of lighting effects in the natural world and then interpret them in our work.  Next year, we should go mountaineering together and glow under moonlight.   I hope to always be an impressionable, young at heart designer.

30 years Special Anniversary Issue~Roundtable Discussion~
Vol.038 – Scope of Lighting Design
Vol.039 – Light art and Lighting design
Vol.040 – Favorable Lighting for having Drinks
Vol.054 – Understanding Millennials
Vol.046 – What is the definition in between of ‘Lighting designer’ and ‘Lighting planner’
Vol.023 – The Benefits of Traveling
Vol.033 – Life Plan：To be active as a professional after coming back from maternity leave

30 years Special Anniversary Issue~Roundtable Discussion~
Vol.056 – Lighting and Sleep
Vol.010 – Moonlight in the City, Moonlight in the Mountains
Vol.011 – How to Polish up your Womanly Spirit
Vol.061- dan sha ri
Vol.59-What is your favorite season of the year?
Vol.60-Patterns of a Healthy Lifestyle
Vol.055- The Generation Gap between Mr. Mende and Me