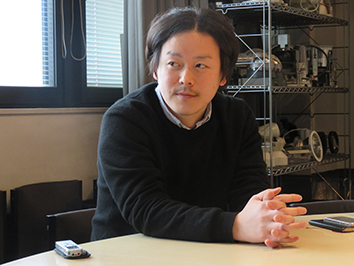 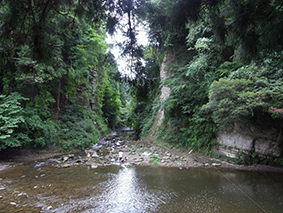 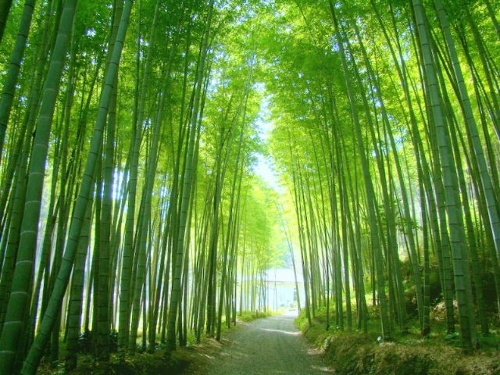 Nemoto：I was raised in Tokyo, but I really like the outdoors. Tokyo is, of course, a man-made metropolis, but I am always thinking about ways to incorporate more nature into city life.

Mende：Do you leave Tokyo for the countryside often?

Nemoto：When I was little I used to go the countryside quite frequently to play in the woods and streams, things one can`t do in Tokyo. Through play I learned about the power, strengths and peacefulness of nature. Even now I still enjoy marine sports and hiking. Were you raised in Tokyo?

Mende：I was raised in Tokyo, but on breaks we usually went to the countryside. However, even in Tokyo there were still places left to chase bugs and view shadows from the moon, and other natural phenomenon. But I think the outdoors in the countryside or suburbs is a little different.

Nemoto：When I was a kid there were more parks and open space for play. We would catch bugs and run around for hours. Now, the cityscape is changing and places for play have really been reduced.

Mende：Instead of going outside to play, playing video games inside is easier. Also kids are eating softer foods that are easier on teeth. Lately, we seems to choose the easy way out, which is kind of frightening. I think kids should play outside and get lots of cuts and scrapes! In order to reclaim our way of life and basic functions as human beings it might be a good idea to increase the frequency and availability of making visits to the countryside and similar experiences.

Nemoto：Natural environments like large wooded areas or the ocean can`t be moved to Tokyo so we need to increase greenery and waterscapes where we can. For example there is artificial and natural light, if we could find a way to increase spaces with natural light that would be a start. Skylights are a great way to add natural light to a space. Spaces can become so light filled and open that it seems one is outside.

Mende：Natural light doesn`t mean just sunlight. What about firelight? You don`t like fire?

Nemoto：I like firelight. When I lived in Europe, many people placed lit candles on the table while they ate dinner. Not for brightness, but watching the flickering flame while eating creates a relaxing environment and mysteriously the food seems to taste better! I got the impression that many people in Europe harmoniously coexist with nature. On sunny days people would gather during break time in the sunshine to sit and talk with each other. On weekends many people would hang out at lakes or in their gardens or terraces enjoying the sunshine and other people`s company.
In Tokyo, I`d like to see more places where we can enjoy daylight, whether inside or out, a skillfully designed space incorporating daylight can be relaxing and environmentally-friendly.

Mende：There are numerous examples of pleasant light that I am drawn to in the natural world. Copying this in my design is my point of origin! On the other hand, when I encounter light that is not found in the natural world it feels unsettling and a little bizarre.
You seem like you want to design spaces with a sense of nature even in this artificial metropolis. Am I right?

Nemoto： Yes. I am really interested in how to effectively incorporate natural elements to stimulate the senses.

Mende：That might be kind of difficult. For example, let’s say you project a bamboo forest on a screen in a room creating a virtual reality like setting, but there is no way to experience the wind ruffling the trees. It all seems visual, what about the other senses?

Nemoto：Do you mean the five senses, like a sense of smell or hearing?

Mende： Yes. When you say you what to “sense nature” I believe that means a comprehensive sensual package. I think the tricks behind using artificial things to convey pseudo-nature or virtual nature are easily recognized as fake. The really pleasant and good sensations, rules, and rhythms felt in the natural world lay hidden, but incorporating even one of those elements into a design might be helpful. But don`t you think it’s a little deceitful?

Nemoto：Yes, it might be. However, through the right space design, even artificial natural can evoke a visual or sensual memory. Through that memory or sense the visitor might be more conscious of nature.
Mende：So, to be clear, as a naturalist, when you are designing light, daylight is to be considered not only as an effective and environmentally-friendly source of light, but also to be thought of a pleasant method to sense natural light. I think to consider daylight from only the perspective of being environmentally conscious, one might get bogged down…

Nemoto： I think the psychological and physiological effects of daylight are important also need to be addressed.

Nemoto：Yes, you are right. We shouldn`t forget to respect nature as it is.

June 22, 2007 Sumer Solstice “Turn off the lights and take it slow.” Candle Night, a environmental and energy conservation event that also focuses on habits of the modern lifestyle and finding ones inner sense of time, is the brainchild of …

Work Style Revolution Interviewer: Tomohiro Mukaihira Mukaihira：Today I`d like to talk with you about design and work balance, not as a lighting designer, but as Mr. Mende, the entrepreneur. Recently, the workforce is decreasing with severa…

Santorini, one of the many island of Greece, is a crescent-shaped island in the Aegean Sea. The chalk-white townscape on top of the steep bluffs of this island constantly changes with the natural light, like a painter’s canvas, and one is r…

Vol.035 – The Department of Lighting Design?
Vol.039 – Light art and Lighting design
Vol.053 – Self-Promotion as a Designer
Vol.046 – What is the definition in between of ‘Lighting designer’ and ‘Lighting planner’
Vol.020 – Raising Creative Children
Vol.052 – From Your Bed to Your Desk
Vol.040 – Favorable Lighting for having Drinks
Vol.026 – When Conducting a Lighting Survey