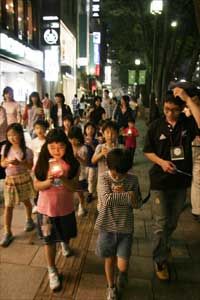 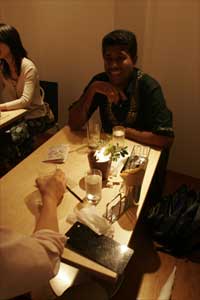 The biannual Candle Night event was held again this year on June 21st along Omotesando. This event, started by an environmental NGO, has grown to include over 500 separate candle events held on the summer and winter solstics throughout Japan. The Lighting Detectives originally held their event along Cat Street, but has since moved to Omotesando. This was the third time to hold the candle event along Omotesando. Each event is somewhat trial and error and expanding on what works, but also adding new items to keep the candle-based event interesting. Shop fronts along Omotesando were borrowed for the always impressive candle installations and designated cafes in the vicinity took part in the Candle Cafe Network.. Also not to be forgotten, the Jingumae Elementary School Students in “Kids on Parade with Recycled Candles,” moving light along Omotesando. All three aspects to the night’s event were available for viewing from 8 o’clock to 10 o’clock.

The kid’s parade kicked off the night’s events as the procession started from Jingu Bridge. Candle in hand, the students held on tight to a candle each had crafted over the past week from old wax gathered from used-up candles and given new life in the form of recycled candles. As the candles burned down the kids excitedly chattered about their candles. “Look at mine!!” “Mine’s the prettiest!!” “The melted wax looks like water!”  The parade made a stop at Cat Street to help with the lighting ceremony of the candle installation, “ignition,” and then continued on to create their own display at the event information tent. These kids have grown up in the area and have walked along the tree-lined street many times, but tonight was different as each student proudly showcased their candle dyed to their favorite color as they parade along Omotesando. The parade was a huge success with over 100 of the student’s family and friends taking part.

Tokyo area college students help design and present five candle installations along Omotesando. First along the route was an installation portraying opposites: fire and ice. Candles were set up on blocks of ice at the entrance to Cat Street and the parade of kids helped with the lighting ceremony. Next, a large screen erected in front of the Oriental Bazaar transformed the shop front into a chic mini shadow picture show. Rows of candles set behind the screen provided just enough light to project the dynamic silhouettes of a large tree and pedestrians, who also became part of the installation by walking along a path created between the screen and candles. Continuing down the street, white cone-shaped candleholders were set up on the steps of the Japan Nursing Association public space. Shops around the steps cooperated by turn out lights so the faint flickering of the candles stood out sharply against the dark background. In front of Yachio Bank clear umbrellas were the main feature of this candle-wishing installation. Contributions were made to the installation by writing a wish on a leaf-shaped card that was then attached to the umbrellas propped up over candles. Last on the route was an installation at the Tokyo Union Church. Playing off the spiritual theme, musical note candle holders made of clear glass covered the front steps of the church and seamlessly connected to the flames reflected in the glass doors.

Seven cafes in the Omotesando vicinity participated in the Candle Cafe Network. Some of the cafes open in the evening already used candlelight to create atmosphere in their shops, but personalized candle holders were on display for the evening in each cafe. For example, vegetable-shaped holders for an organic cafe, jam jars for a fruit parlor, and flower pots budding candles for eco-minded cafes.

Once again the hundreds of candles used tonight, their faint candlelight and simple message can easily get lost in the business of a world famous main street like Omotesando. But the warm of these candle installations seemed to capture glances and smiles from shoppers and on-lookers as they silently strolled by and another great Candle Night came to a close.

Under a rush of redevelopment, this is a huge period of transition for the area surrounding Shinjuku. On this survey, we were met by soft light filtering out of tall skyscraper windows, brilliant signage on facades and rooftops, and crowds …