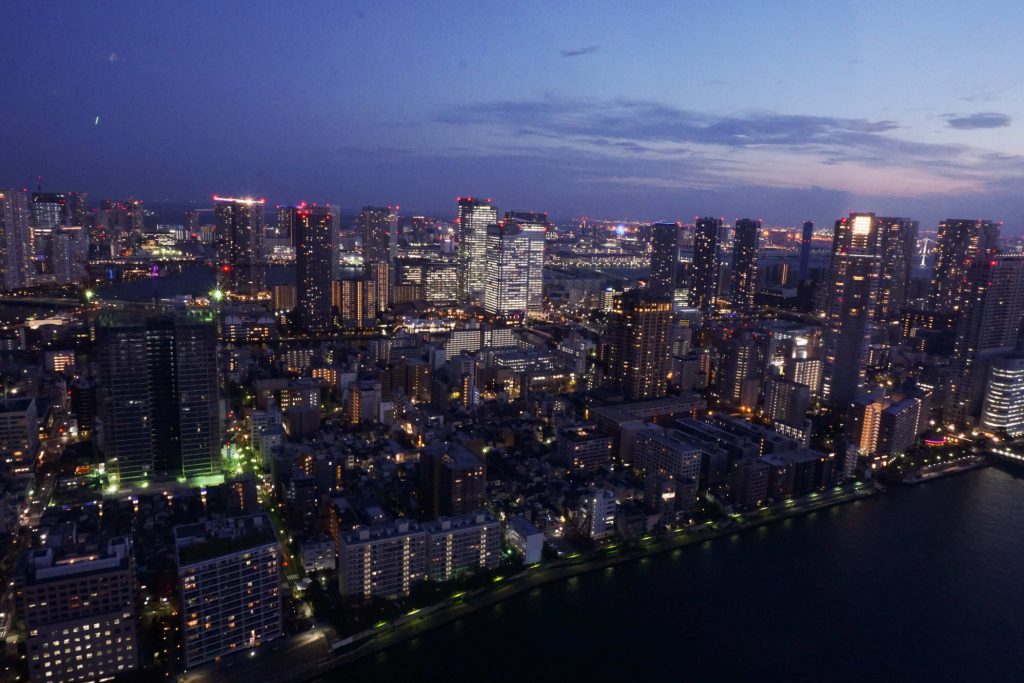 An overview of Tsukishima. In contrast to the bright large city buildings, the small alleys and storefronts don’t leak much light

Tsukuda is an fisherman island made in Edo-period. Tsukishima was landfilled in Meiji era and now there are still many row houses and small alleys. While the port area of Tokyo is going through mass redevelopment, we investigated the lighting environment of this area filled with intermingling old town houses and large city buildings. 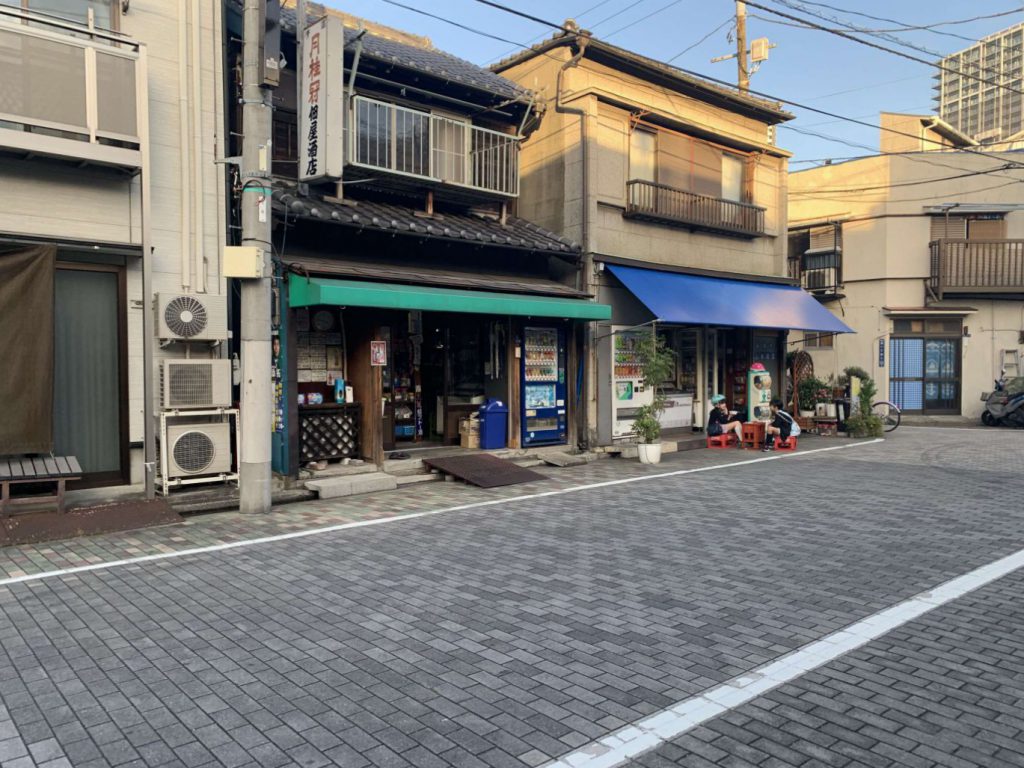 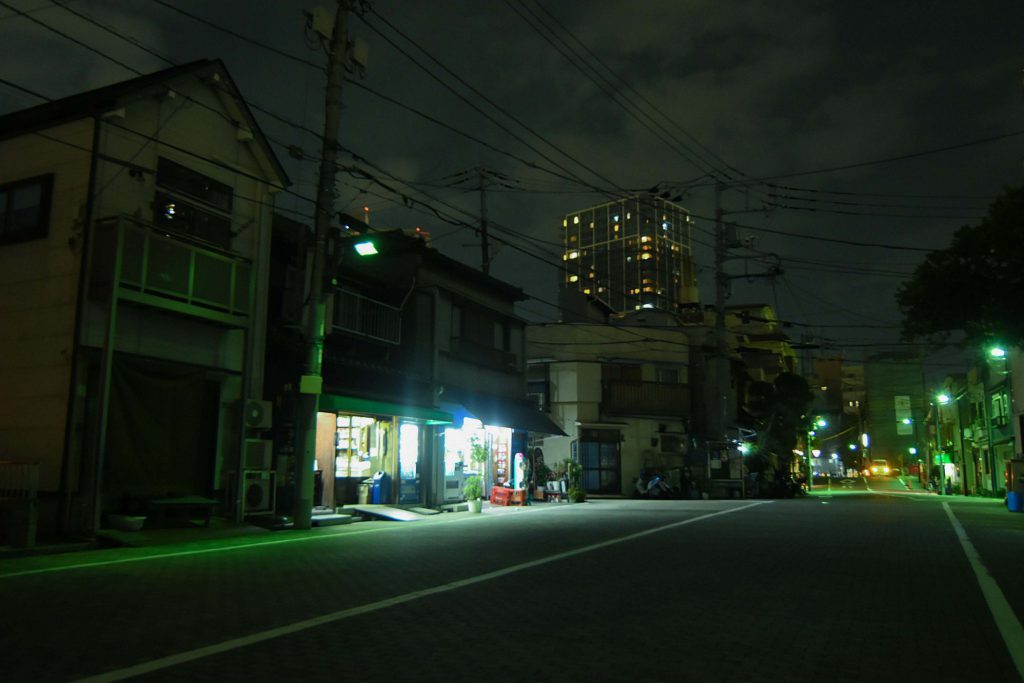 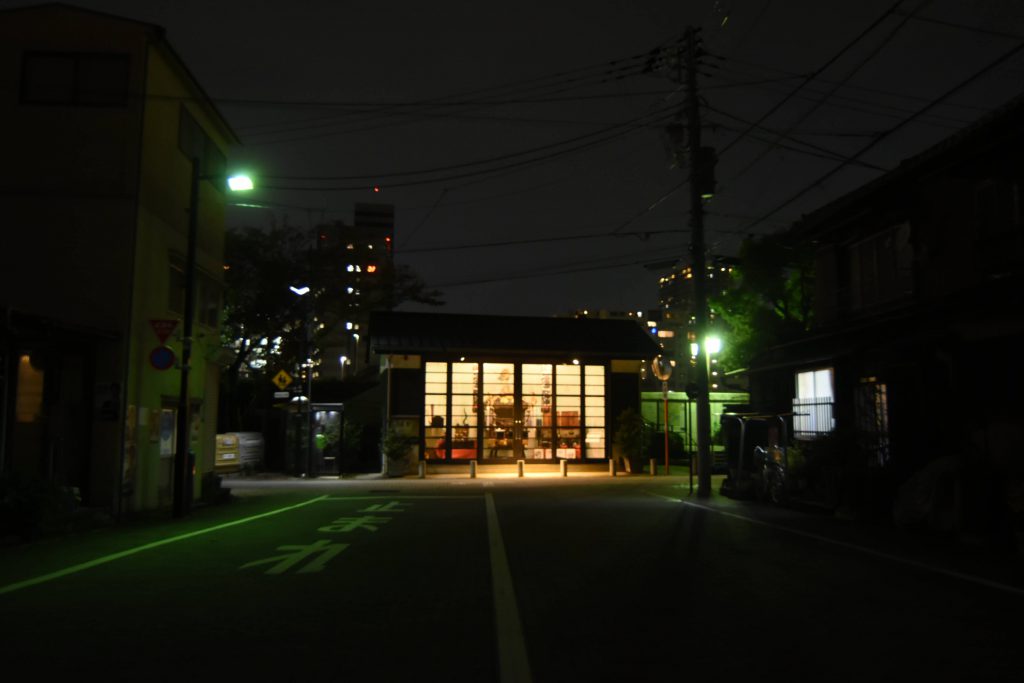 Tsukuda Machikado Museum. Its lit with LED3000K with about 134lx.

Our investigation started by taking an overview photo from a tall building from the other side of the river. With the hustle and bustle bright lights from the Central area’s cityscape, there was one part that was dark- that is our target of this investigation, Tsukuda・Tsukishima. The dark patch from this area is even more pronounced as it is surrounded by the bright city lights all around.

As we get back on the ground, we headed towards Tsukuda 1 chome (Old Tsukuda Island) Mainstreet. On our way we saw the mercury lamp streetlights (4500K) emitting some green tinted white light. The average brightness was around 11lx. In the day you could still see a nostalgic scene with children playing outside the old candy store but as traffic is scarce at night, it eerily silent. The only differing light source was the Tsukuda Machikado Museum at the end of the road. Its display features the festivals special to the region that have continued since the Edo period and the Mikoshi and Lions used in the Sumiyoshi Shrine festival, but our focus was drawn to the space as it was warmly lit with lightbulbs in contrast to the mercury streetlights.

As we explored the area, we found out that a Shrine continued from the Edo-period existed on 1 chome. It hid at the back of a thin alley between two houses, somewhere that would be difficult to find on your first visit, but we had the faint smell of burning incense to help us. The inside was neatly cleaned and brightly lit with fluorescent lights (133lx) which showed us how dearly the locals treated the Jizo statue.

Sumiyoshi Shrine, which also has been protecting this Tsukuda area from the Edo period, welcomed worshipers warmly with two 2700K lights from its new stone lanterns.

Ishikawashima Lighthouse, rebuilt from a lighthouse in built at the end of the Edo period, was lit up at night. While the whole town seemed lit generally with mercury streetlights, I get the impression that the places most important to the locals seemed to be lit carefully.

Because Tsukuda is a residential area, it shouldn’t be a bad thing that there is not a lot of light at night. However, as a historical landfilled area (as compared to the ones around it that were filled in the Meiji era) it shouldn’t be lit with such cold lighting as the green light from the mercury lamps but with a warmer light, or one which design can give us a glimpse into the history of the area. (Yuichi Anzai) 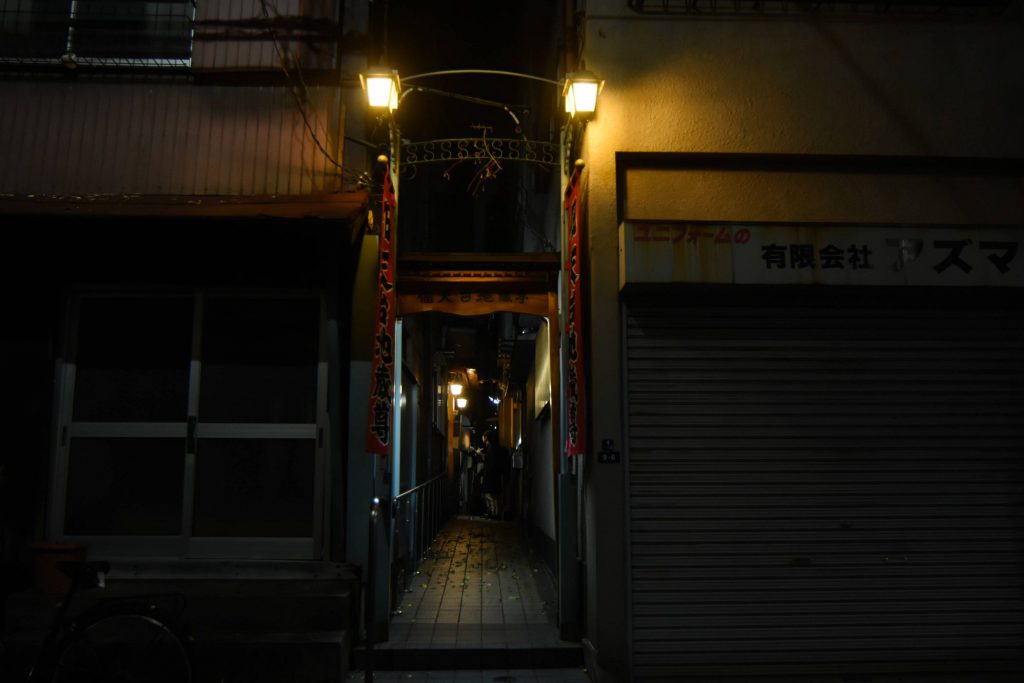 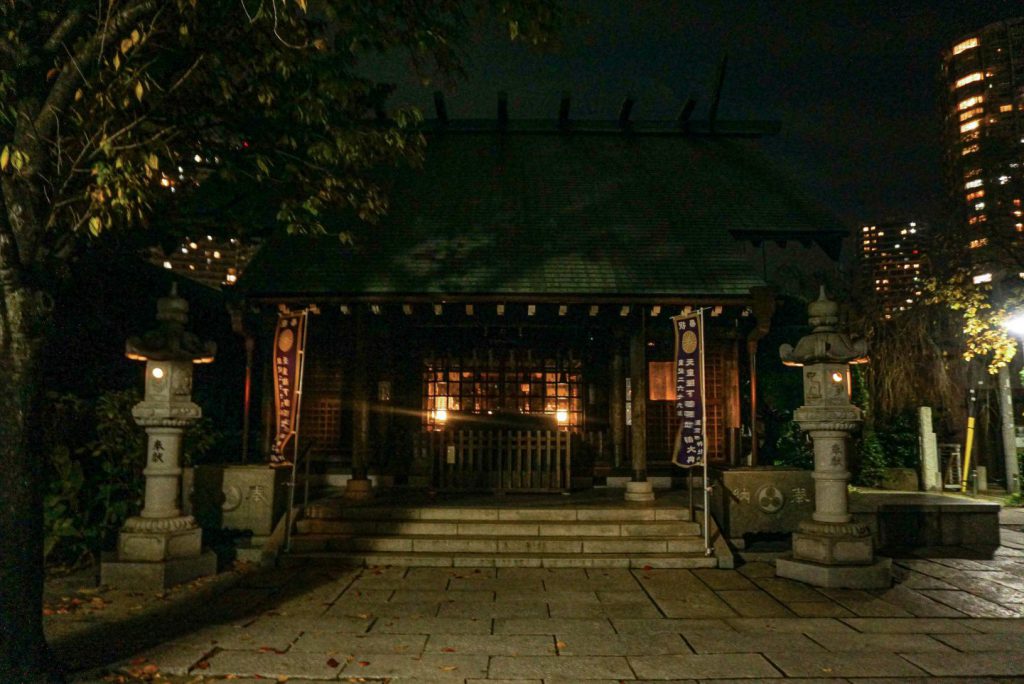 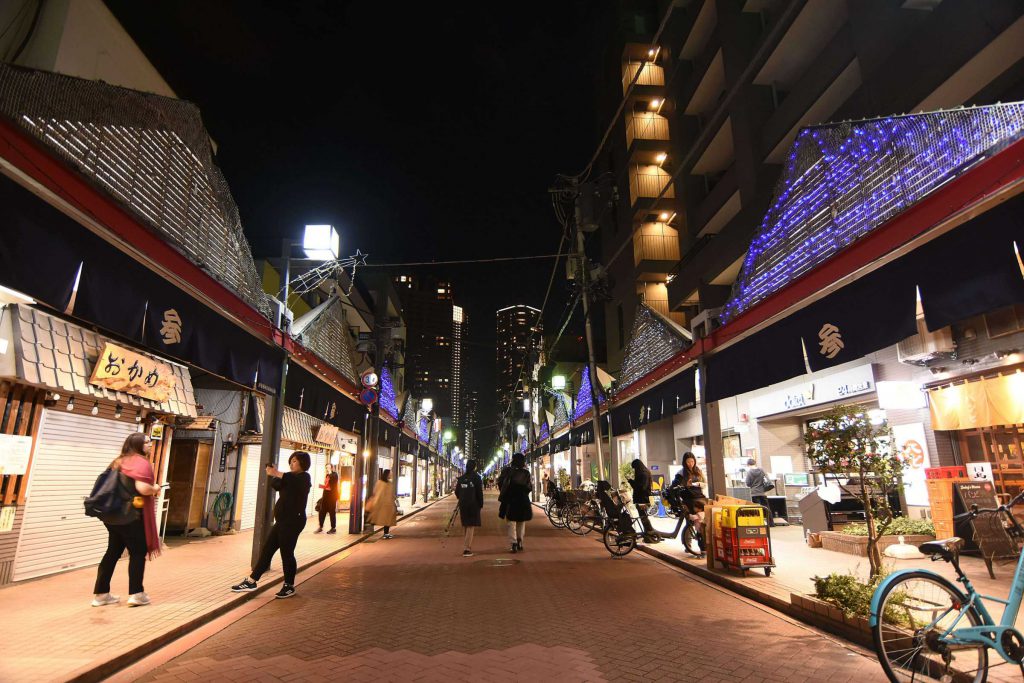 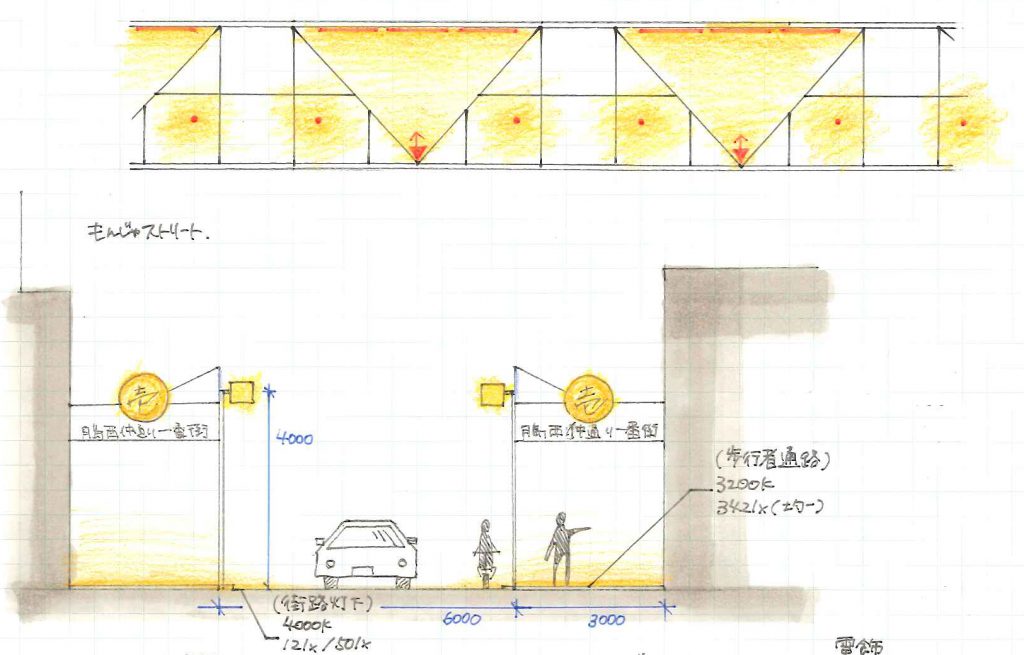 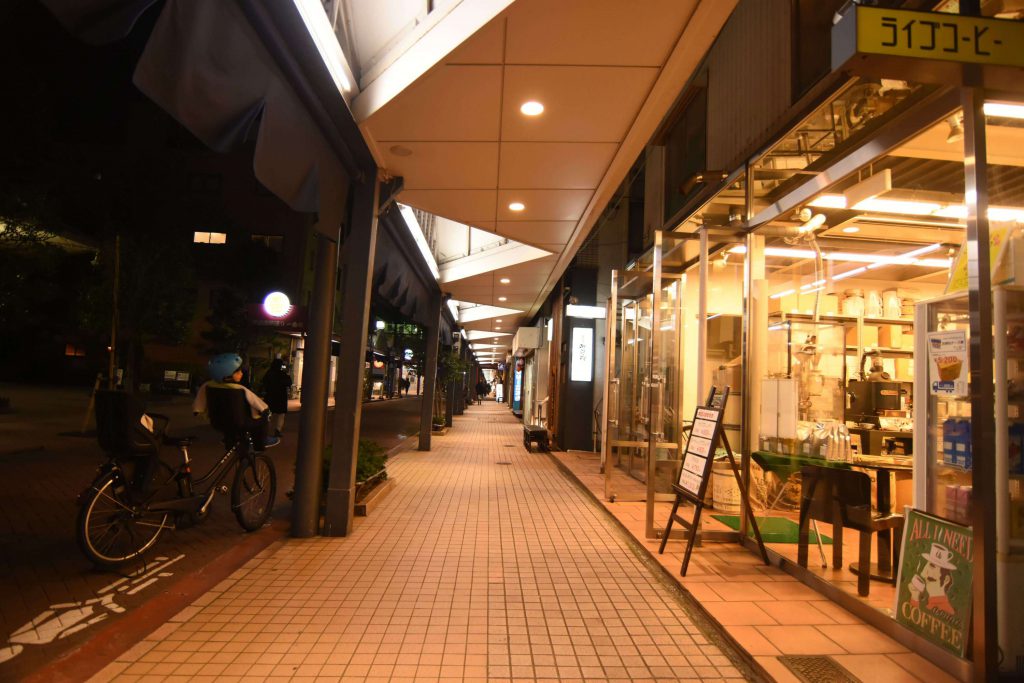 Town of Monja, Tsukishima was created when Tokyo harbor was landfilled in the 25th year of the Meiji-era. There were many factories in the area at the time and because the workers needed residences many row houses were built in Tsukishima along with small roads that twist and turn around those houses. While the Great Kanto Earthquake and Bombing of Tokyo caused massive changes to the center of Tokyo, the effects were relatively small in Tsukishima, resulting in one of the rare places you can see Meiji era style streets and houses.

In Tsukishima, we focused our investigation Nishinaka Shopping Street, famous for Monja Street, and the winding roads and alleys around it. As we walked into the Nishinaka Shopping Street from the Tsukishima station side, our eyes were caught by the arcade that stretched about 400m. It featured fluorescents, downlights, spotlights placed in a rhythmical pattern. The ceiling that was cut out in triangles, lit with fluorescents, in combination with the round downlights and created a cute pattern that stretched down the arcade. We measured the lights to be at around a color temperature of 3200K and brightness of 340lx directly under the arcade. It seems to have an effect on foot traffic as well, where pedestrians seemed to prefer the bright arcade instead of the middle of the street (which is also paved to be a partial pedestrian zone). The arcade also featured blue and white fairy lights, perhaps Christmas decorations that alternated colors as it ran along the length of the street. Its contrast with the warm light mentioned before caused the cables to stand out which was slightly disappointing.

One step into an alley gave transferred you into a completely different mood, where the lights are much dimmer than the storefronts. The generally dark alley and the light spilling from the restaurants and bars and their colorful signs creates a light-scape that entices you to explore deeper into the alley. The bars in the alley had relatively more locals in contrast to the tourist centered storefront street. The view of locals drinking and eating together happily after work brings us back to Tsukishima’s roots as a worker centered residential area. (Namiko Watanabe) 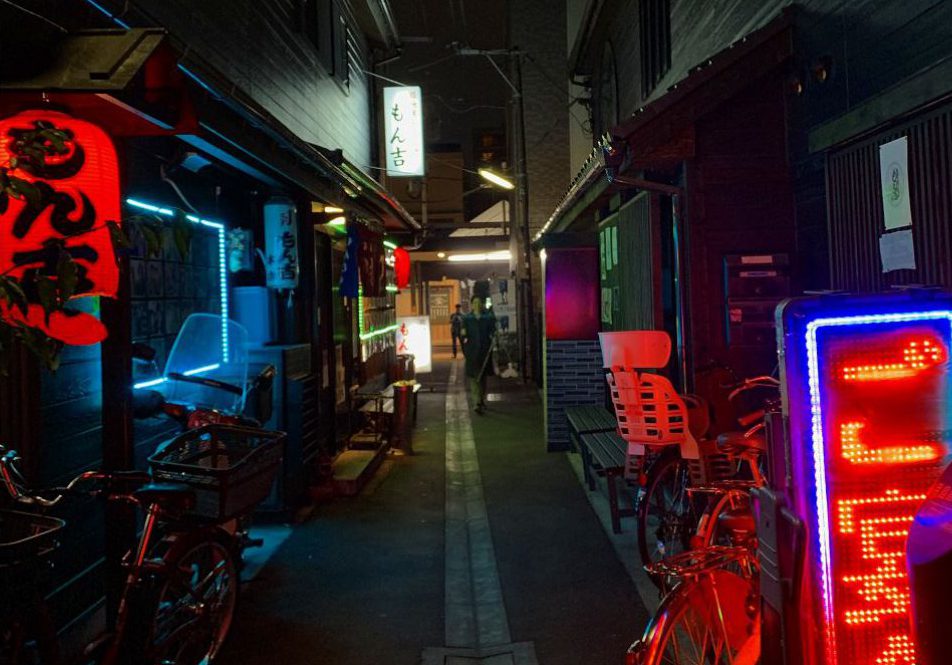 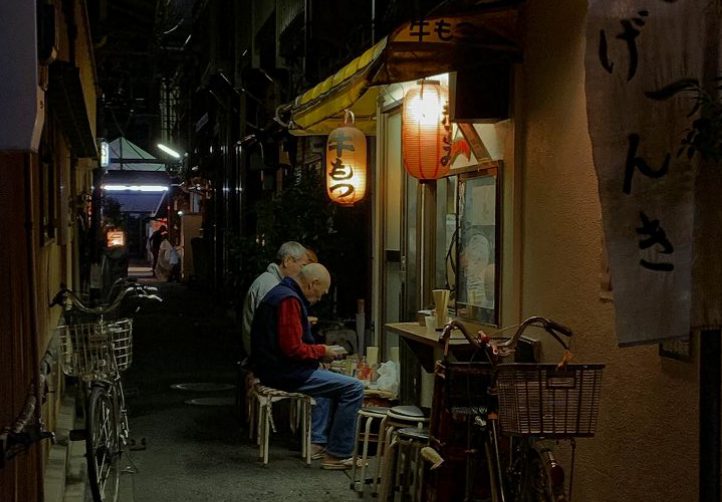 A Motsu Grill store in an alley

Construction on a new High-rise apartment has started on the east side of Nakanishidoori 2nd Street. The lower floors of the place, facing Monja Street has plans to be turned into Row house style stores. This makes us feel that while the buildings around the area change, the storefront street would be relatively untouched and made to remain as a tourist attraction. But it still makes us question what will happen to the unique alleys, row houses, and the culture that the locals have cultivated living in the conditions for years.

One thing that is for certain is that the environment here is going to keep changing, and whether something that has been passed down till now stays or changes will likely be decided in the near future. Even if other changes happen, we hope that the parts that make this place unique and therefore interesting remained unchanged with time.