Night view from the opposite shore of Tsukiji, across the Sumida River. Tsukiji Market on the middle, Tokyo Tower and Tsukiji Bridge on the left, and Kachidoki Bridge on the right.

In this Tsukiji survey, we visited the inner market, where mainly wholesale is taking place, the outer market, where visitors can shop and eat, and also the Tsukiji Honganji temple and the Kachidoki Bridge which are popular spots for tourists.

■Luminous Environment around Tukiji Fish Market
From the Kachidoki area on the opposite side of the Tsukiji fish market, you can overlook the entire view of the market, buildings such as Kachidoki Bridge and Tokyo Tower across the Sumida River.
While we notice white light that comes from the market and surrounded buildings, the warm-colored light of incandescent lamps emitted from the fish handling facility facing the Sumida River on the opposite shore. This view is quite impressive, and creates an emotional and beautiful view during the night.This warm light from the market brings the sense of the history of Tsukiji rooted in this area for a long time.
In contrast, the white light emitted from the group of high-rise buildings in the background seems to symbolize the momentum of the rapidly evolving city.
Outside the market, there are more than 400 shops, and many shops still remain open after evening.Various light sources and lighting fixtures are used in each store. While it creates a chaotic light environment with no sense of uniformity, it somewhat gives the nostalgic feel of Showa-period atmosphere. 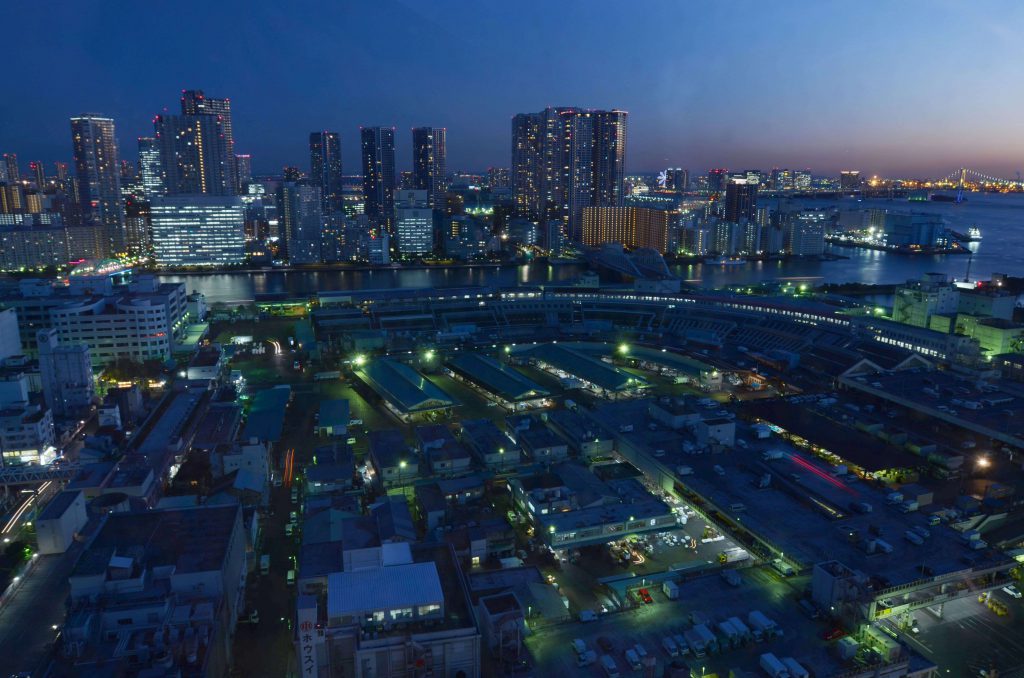 Overlooking the Tsukiji market at night. The lighting is minimum and the market looks quiet compared to the morning 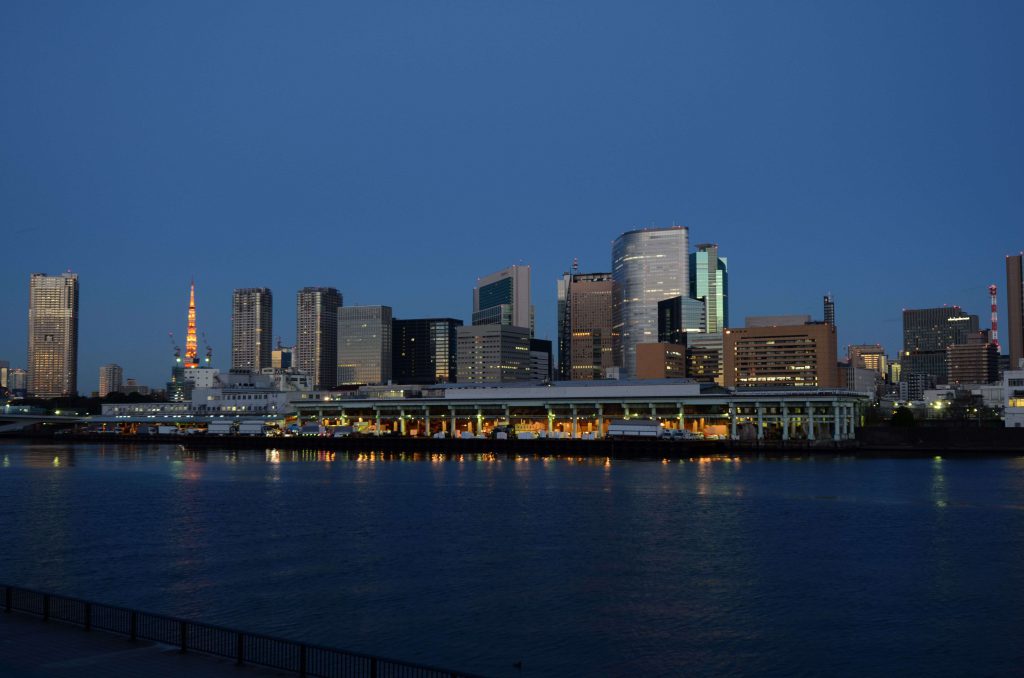 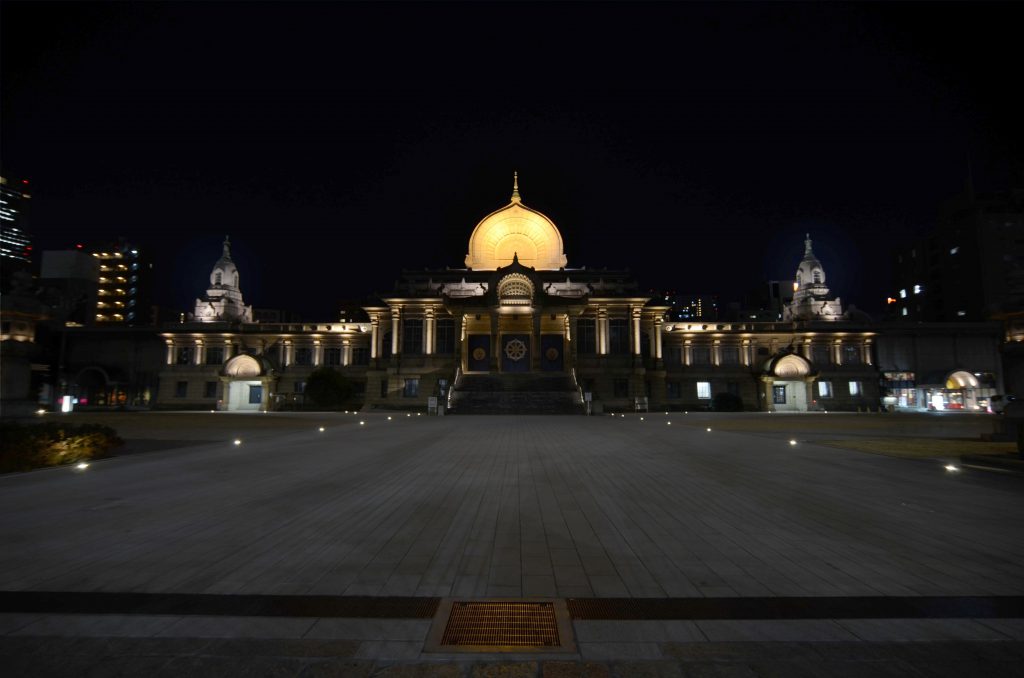 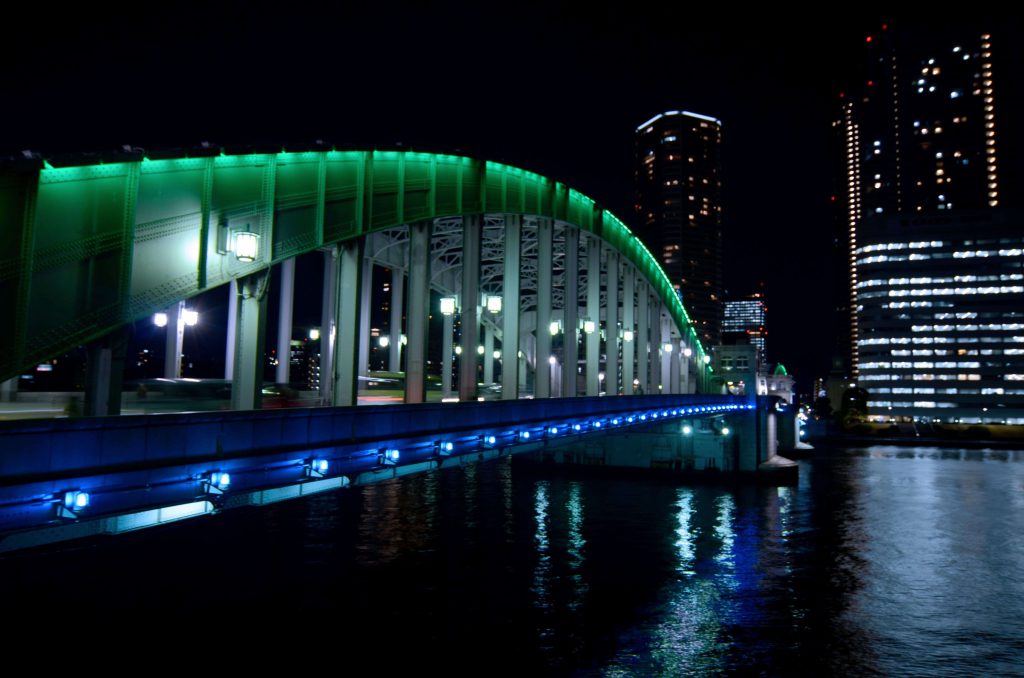 ■Tsukiji Honganji and Kachidoki Bridge
Tsukiji Honganji was built in 1617 in the Edo period, and it is designated as an important cultural property of Japan.This temple is constructed in ancient Indian rock-cut style and gives a majestic feel.
After the sunset, the entire building was boldly lit up, and it created a mystical atmosphere which was distinct from the daytime.The central dome designed with a lotus flower, especially decorated with spiny tree leaf motif, is lit by a lower color temperature than its surroundings, and it presents the godly appearance in the city at night.
Kachidoki Bridge over the Sumida River was built in 1940 and is one of the few moving bridges still existed in Japan.Although it no longer operates today, it is located closest to Tokyo Bay. And you can see it lit up from the Takeshiba area.
Bright light in green and blue, which draws a gentle arc, joins the both sides of the shores and reflects light on the water surface with the high-rise apartments near-by. The water surface calmly shimmers by the wind and occasional approaches of roofed pleasure boat passing by, which makes the city look as if it slowly takes deep breaths.
How will the night view of this beautiful Sumida River change in the future?
Near the Sumida River, large-scale urban development for 2020, such as Takeshiba development and Harumi Olympic Village, has been undergoing one after another.The Sumida River is exposed to such situation, but we hope that the river keeps reflecting our daily lives on the water without disturbing the view, and continues to enrich our feelings.(Isao Nemoto)

■Inside the Market
At 3 am in the morning, we went into the inner market where we cannot normally enterTurret trucks with headlights keep coming and going.We joined a ride on the platform of turret of Mr. Aizawa of Yonekawa-Suisan and clung to the platform bar with freezing hands and crawled inside the market. 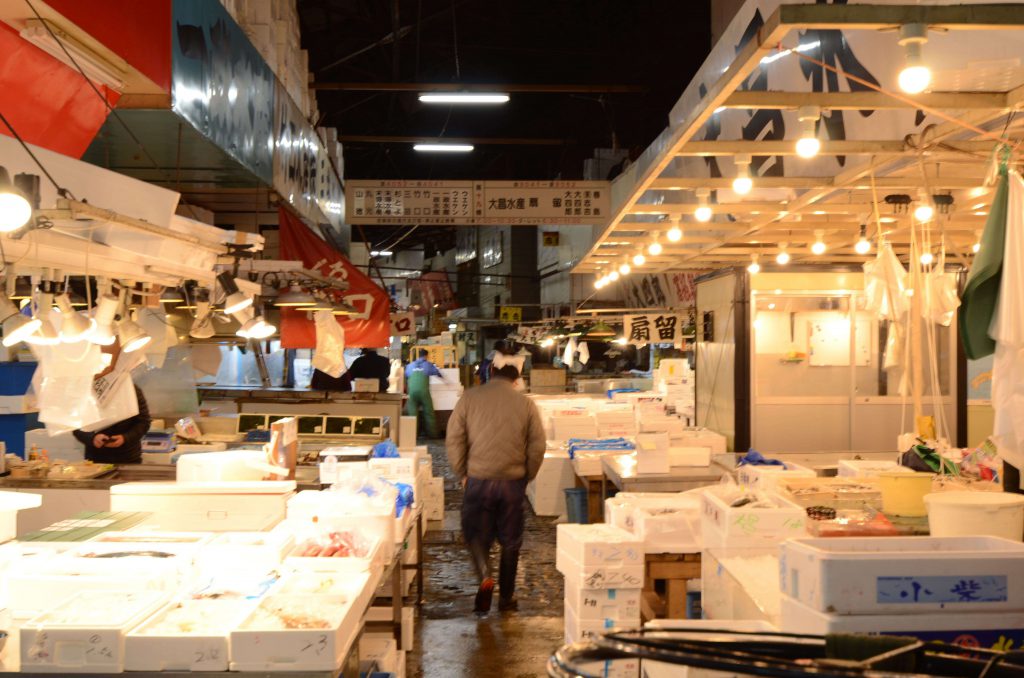 In the wholesaler zone, variety of lighting fixtures can be found at each vendor. 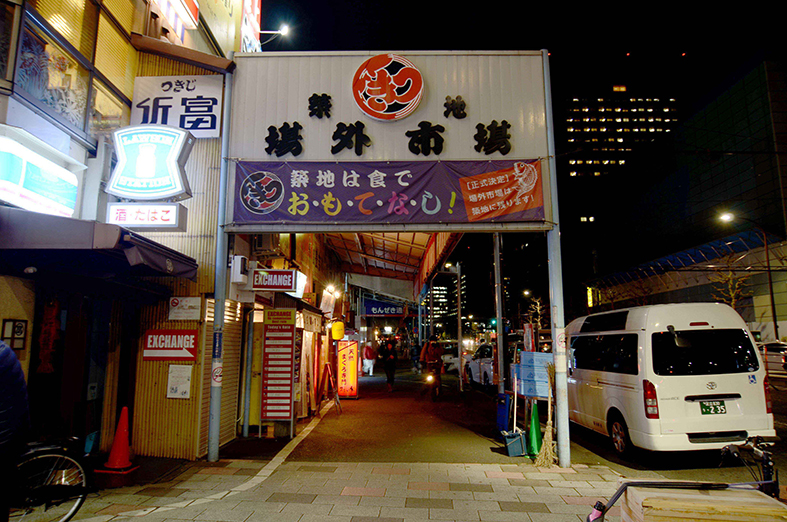 Looking at the Monzeki-street, the entrance to the Tsukiji outer market, seen from Tsukiji-4 Chome crossing.

■Fresh fish auction area and fish wholesale market
Mr. Aizawa first took us to a fish auction area.Boxes filled with blue fish, shellfish, seaweed were stacked up filling the floor.In a large space of roughly 15m in width and 7m in height, fluorescent tubes were lined up at a pitch of about 2 × 5 m.In the place, the color temperature was 4800 K, the illuminance on the floor surface was 300 Lux, and the color rendering was Ra 83 with a high degree of uniformity.This is a place to trade fish caught in pelagic ocean.
Wholesale place was a fan-shaped, trading fish caught in the sea around.Except for the height of about 5m, light environment here was similar to that in the fish auction area. 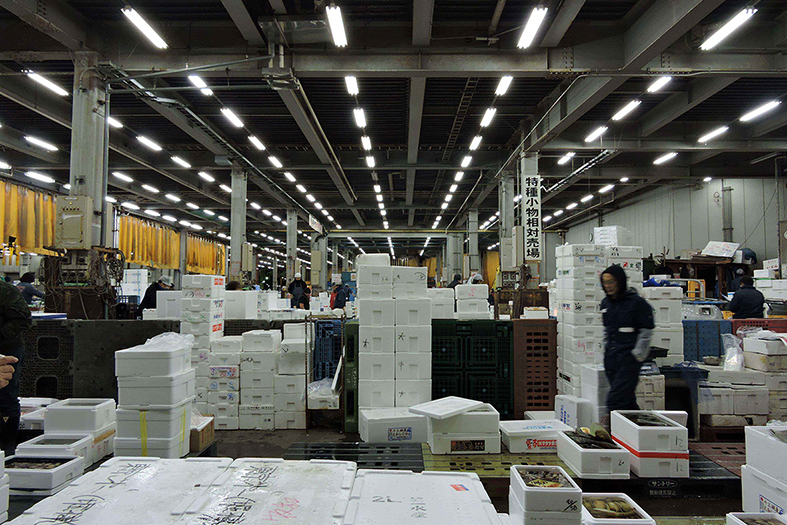 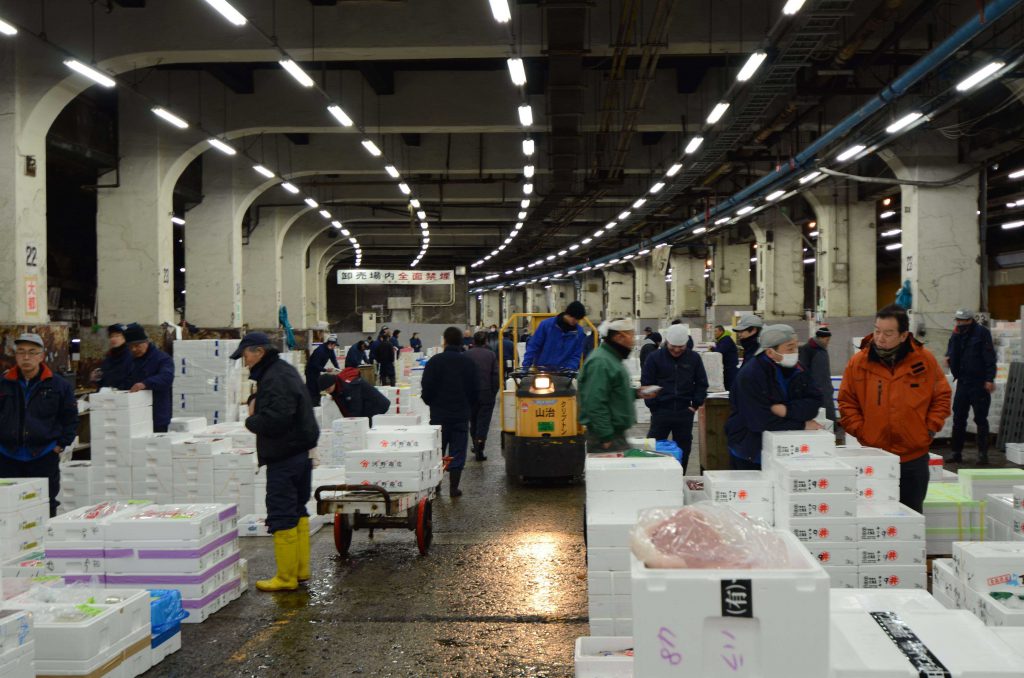 Turret truck running carefully between the boxes stacked up

■Tuna Auction Area
When we arrived at tuna auction area, fish dealers were walking between the arrays of tuna checking on their qualities.While stroking with a tail and kneading with hands, they occasionally lit up with flashlights to assessing on the freshness.The gold bell sounded along with the auctioneer’s shout.The tuna auction began.
Auctioneer and fish dealers shout one after another.Both of them raised their hands high, sending out signs while embarking on their own.The light sources were FHF 32 W fluorescent tubes.While white fluorescent lights were used in many areas in the market, the color temperature here at tuna auction was 2800 K.Whether it makes it easy to recognize the lean of tuna or to show it in better quality, they used low color temperature for base lighting.The illuminance on the floor surface was 250 Lx, and the color rendering was Ra 85.

■The Wholesale Market
The wholesale area is the most miscellaneous space in the inner market.Each vendor gathers closely, and turrets pass through narrow streets. It feels like a retrospective atmosphere like a Hamonica-Alley in Kichijoji.Various light sources such as incandescent light bulbs, fluorescent lights, LED light bulbs, and halogen lamps are used together for lighting applications at each stand.Should we describe this as a lighting aquarium?
We are very curious whether lighting environment at the new Toyosu-fish market will be aimed at uniformity.

■Passage between a selling area and a wholesale venue
I once walked through the passage between the selling area and the wholesale venue during the daytime.There was a sloped roof made of polycarbonate corrugated board.I found the Tsukiji market had been slowly deteriorated, as there were countless small holes on the roof.Unexpectedly the direct sunlight passing through the holes created beautiful light droplets onto the winter concrete ground.The ground, lit with a stream of gentle sunlight overlapping each other, was a reminiscent of a day in warm spring.Still it might not require a special mention as a light environment, I would like to note the fact that there were the passage of time and the poetic light scenery in Tsukiji. 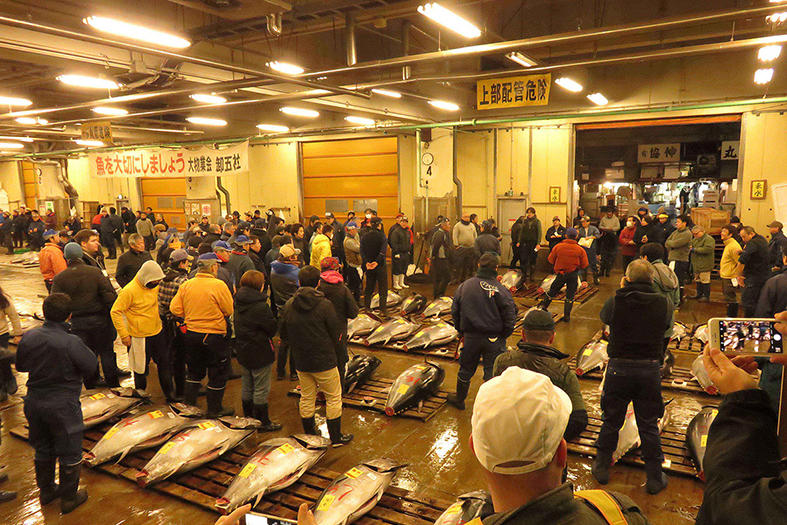 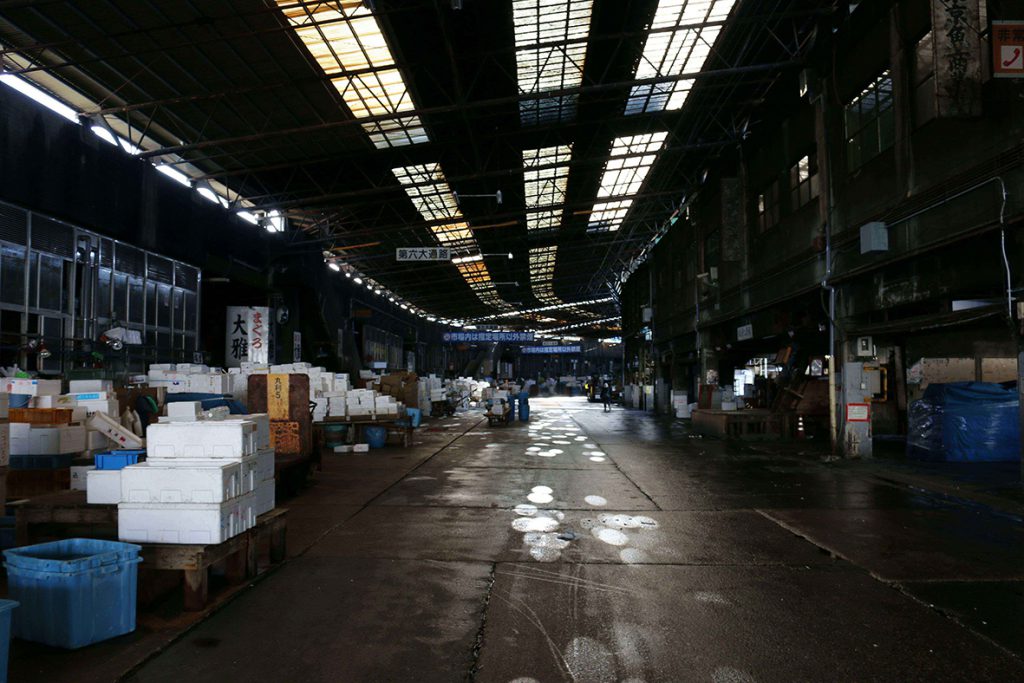 Aisle between the auction area and the wholesale market

■Light to motivate purchasing
I bought a slice of refreshing orange-colored salmon at the fish market.When I took it out in a passage away from the shelf, the color looked dull.I found red LED elements were mixed into a spotlight on the shelf.The shop manager told me that he chose the particular light fixture to show the lean more vividy and attract customers to purchase fish products. Vivid colored luminaire are used not only in Tsukiji fish market, but are also frequently used in fresh fish and meat zone in supermarkets.To see the actual color of an item, you have to check it off the shelf.At the selling floor, stores use particular lighting technique to enhance product appearance more vividly.

■Postscript
By the time we got off the turret, the sky in the east started to become brighter.To see the Tsukiji market in the dawn from the opposite shore, we went through the Kachidoki-bridge again and crossed the Sumida River.We gained the sight to the sky as we reached the middle of the bridge.
The winter sky at the clear dawn had a gradient from dark blue to pale green.
A pale red sky began to show up between buildings in the east.When we arrived at the other side of Sumida River and turned around, there was a group of high-rise buildings with their lights off stood like a wall without gaps behind the light at the Tsukiji market.I would like to keep looking at what kind of lighting environment will be made as the market moves to Toyosu in the near future.The blue faint of the night sky is still remained in the west.(Masafumi Yamamoto)

The thoughts and ideas of Poul Henningsen seem to be present throughout the streets of Copenhagen. Co-existing soft, tender light and natural light combine to create a nightscape in Copenhagen that reminds us technology is not always the an…

Shomei Tanteidan Salon Review of the Kamata night walk 2017/09/06 Noriko Higashi We had a review of Kamata-town walking which held on the Premium Friday in the midsummer, when the town flourishes the most. How was the impression of night in…

17 November, 2005 This month the Lighting Detectives rallied at the new Endo Lighting Corp. Aoyama Showroom for a bigger and better version of the regular salon session. The showroom accommodated 60+ detectives, a 3-screen slide show, and e…