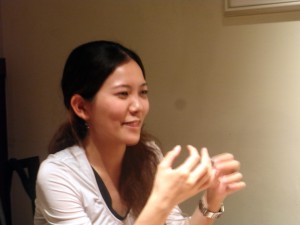 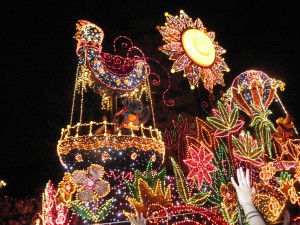 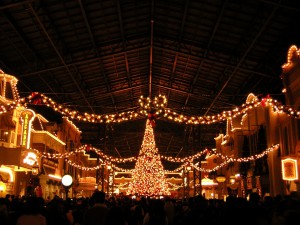 Ogawa Yes. I am one of them.

Mende At what age did you start to really like Disney?

Ogawa  I first went to Disneyland when I was in Kindergarten.  When I started elementary school I was in love.  I went with my family every year until I was in the 8th grade.  The first time my parents took me to the park we watched the electric parade and they said the look on my face was the best they had ever seen and they decided they needed to bring me to the park every year.

Mende  Yes, I have also seen the electrical parade.  That type of sparkling and twinkling lights are very typical of Disneyland.

Ogawa  Yes, very much.  I have been wondering about something…Do you like sparkling and twinkling lights?  Or maybe it’s not your style?

Mende  Well, I really like the flash and fizzle of fireworks.  Although it is part of the job, I don’t really think I like the illuminations that many people find uplifting and exciting.

Ogawa Yes, I think many at LPA feel the same way.  However, I don’t mind illuminations at all.  Illuminations are just one expression of many in lighting and I find it very charming.

Mende Regardless of thoughts and beliefs,  I appreciate the image produced by sparkling effects and  I don’t mind sparkle or twinkle in the dark night.   Thirty years ago when I saw the illumination of trees in NYC’s Central Park,  I thought it was spectacular.  It was like the soul or spirit of light was dwelling in those trees.   In the case of sparkle and twinkle in architectural lighting, I won’t go as far as to say they are enemies, but I think in terms of architectural lighting it is a different conversation.  A chandelier is just a chandelier, isn’t it?

Ogawa I think I really understand where you are coming from.  Sparkle and twinkle can really pull at your heart strings, but I don’t think we are satisfied with just that image and maybe we shouldn’t be.

Mende The spread of LEDs, has brought sparkle, twinkle, and color-changing lights.  Many structures now look like casinos and I feel apprehensive about how the face of the cityscape will change.

Ogawa I think one reason that sets Disneyland apart is that the park is not aiming to highlight just individual structures, but  Disney has created an entire scene and atmosphere within the park.  There are areas that sparkle and dazzle, but there are also quiet corners, creating a good balance of light throughout the entire park.  While at LPA I have had the opportunity to work on projects in and around Disneyland and they have a really strong philosophy.  For example, the park checks to make sure shop lighting is not too bright or glaring.  Also, the park creates vistas with sparkle and dazzle, but in places that aren’t supposed to be bright, the lighting is definitely not too bright or glaring.

Ogawa Disneyland sparkle is not reckless.  Where they want guests to see sparkle they have added sparkle and other places are very restrained.

Mende That is a very good point.  Disneyland is fundamentally glare-free.   They have not crossed the line from sparkle and dazzle to blazen brilliance.   Glare is restrained and the park has created a picturesque scene for guests to have fun taking pictures.

Ogawa It is good to know that you don’t mind a little sparkle.   However, I don’t like it when it is used simply as a  tool to attract attention.  If thought is really put into it, sparkle and dazzle can be really nice.

Mende Within the spectrum of sparkle, I think some lighting methods can be called advanced.   Sometimes glimmering can be too much, become  tiring or look too cheap.  We have to decide how much is just enough to create a comfortable lighting atmosphere and use detailed tools and methods to achieve this.   If we label it architectural lighting it may come off as pompous, but “running from Disney” may actually be  “learning from Disney.”  Even the sparkle and dazzle of Disney has memorized Disney fans.  The lighting methods to create this Disney sparkle are probably just one of many top-secret Disney secrets.

Ogawa Think about that next time you go to Disneyland and you might have more fun.

Mende Maybe the Lighting Detectives should make a trip to Disneyland!  Please show us around!

Interviewer: Jio Yeung Jio： I always wanted to become a video game designer, unfortunately I had to give up my dream.  I am just a beginner when it comes to design so I am looking forward to learning a lot from our talk today.&nbs…

Vol.008 – Waterscapes with Light
Vol.009 – Learning From Disney
Vol.062-How to Live and Work in this new era with Covid 19
30 years Special Anniversary Issue~Roundtable Discussion~
Vol.061- dan sha ri
Vol.60-Patterns of a Healthy Lifestyle
Vol.59-What is your favorite season of the year?
Vol.058-Finding the Ideal Street Lighting