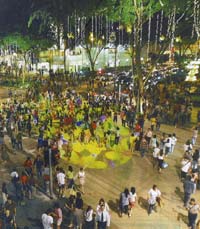 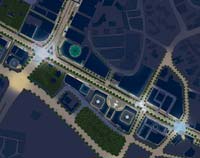 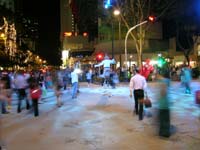 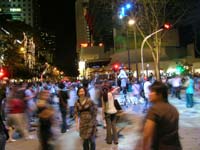 New things are happening along Singapore’s famous Orchard Road. A new season of lighting is being born. The Bidford Junction, near Takashimaya and Paragon, also the busiest along Orchard Road, became a scramble crossing once every 30 minutes. During this time, 「Garden City, Working on Water, Aurora, Starry Night Sky」, a series of images will be projected onto the roadway, creating a light pattern on the pavement while pedestrians crisscross paths. The idea and design came from the Singapore government and LPA was in charge of the project to transform a strategic transit spot into a theatrical stage. The pedestrians caught in the rainbow of light are the actors who excitedly perform on stage as they cross the intersection. This might be the first lighting display of its kind in the world.

Right now we are also in the middle of working with the government on the Singapore City Centre Lighting Exhibit on display. The exhibit displays a proposal for a lighting master plan for the city and also outlines basic guidelines of urban lighting. According to this proposal, the junction lighting is a realization of the Singapore Tourism Board’s (STB) first attempt to redevelop Orchard Road. There are more details about this on the STB website. However the main purpose of this one event was to not just have a well lit intersection, but redesign the existing light plus α. While increasing the percentage of reflection on the road surface, we incorporated projected images and soft wash light to create a 750-sqm canvas of light in the middle of Orchard Road.

The test run was on December 20 at 7:30 pm and would show eight times before ending at 11:00 pm. After the first day everyone was saying “Show it more often!” If it was just the lighting, we would be able to do it however often the city would like, but this was the first time to have a scramble intersection along Orchard Road. The traffic system is not programmed to stop in all four directions at the same time, which may cause traffic problems. The LTA is studying the problem and the probability of a permanent scramble intersection.

But problems aside, there was such a crowd that night, and just maybe since it was a new event, but people were literally skipping and dancing in the street. Couples taking pictures. It was exciting. I was also caught up in the atmosphere and screamed, “Let’s enjoy!” and took off across the intersection. There were so many people and lights everywhere, a chaotic situation that ended in a quick 60 seconds. The first showing was yellow flowers, but the images of water and blue in the second round had a more festive feeling.

Well, we have started to get many responses since and there are still things that need adjusting and problems fixed, one of them being the surrounding street lights need to be toned down during the event and I, personally, would like the stopped cars to turn off their headlights, too, so they don’t interfere with the images.

After WW II, Sendai was rebuilt into a modern city with streets perfectly aligned in a gridiron pattern, but mixed with covered arcades. We surveyed the covered arcades and their daily activity along with the annual lighting event Sendai Hi…