As the 3rd children`s workshop to be held at the Edo Tokyo Open-Air Architectural Museum in Tokyo, the children crafted lanterns in the shapes of buildings and trees to create a miniature city of light after a parade through the park.

As a part of Autumn event “Light up Autumn Foliage at Edo Tokyo Open-Air Architectural Museum, we were invited to do children workshop.

Theme of this time was to experience the dark and candle light, to make house shape lantern and to create a town.

Lantern with shape of tree and house 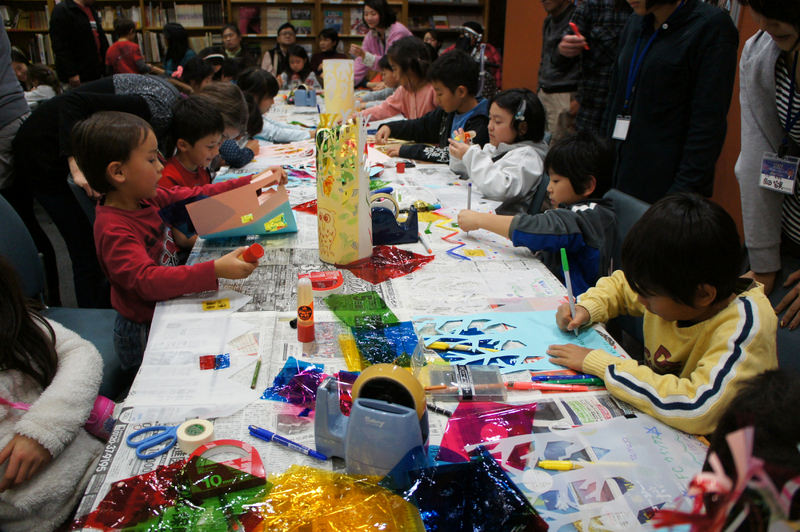 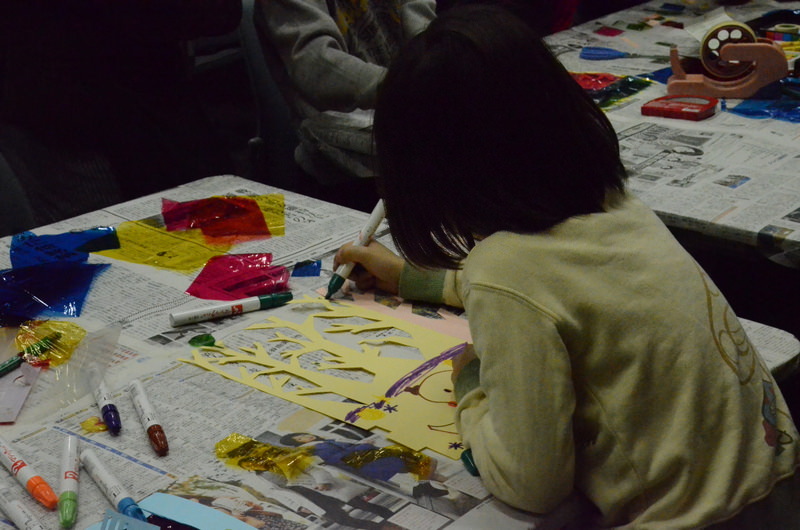 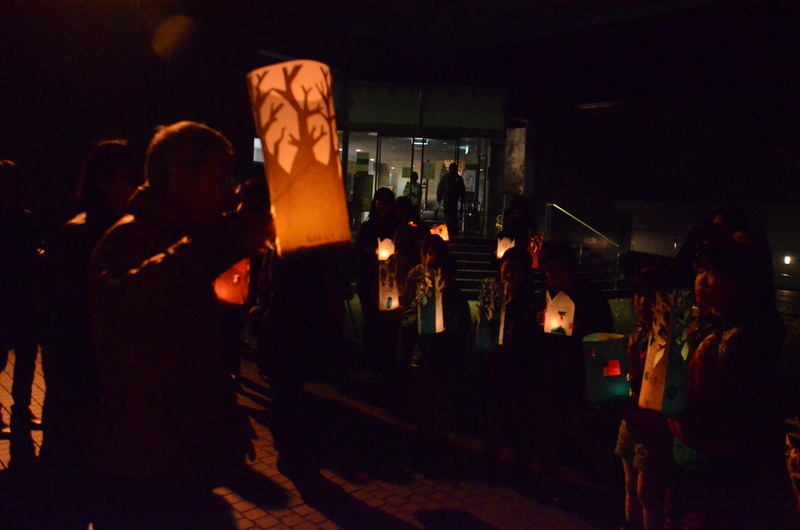 In two days, about 50 children and 63 parents joined this workshop.
College student volunteers were responsible for preparing for the workshop and explanation on the day. Children chose from three shapes of tracing paper for lanterns. The most popular shape was tree lantern！！A lot of branches extending from a round base transformed into a fantastic forest。

A lots of founding during lantern making

Children who participated were wide in age, even if template of lanterns were the same, each one of the completed works was different.

The base of lantern was colored paper and tracing paper. Drawing a picture as they like on the base, using six color cellophane, using scissors to drill a hole, or changing to an entirely new form, children were able to think freely to create their original lantern. With the limited materials, children tried various methods, and we believe that children found many discoveries.（Rachel Nakayama） 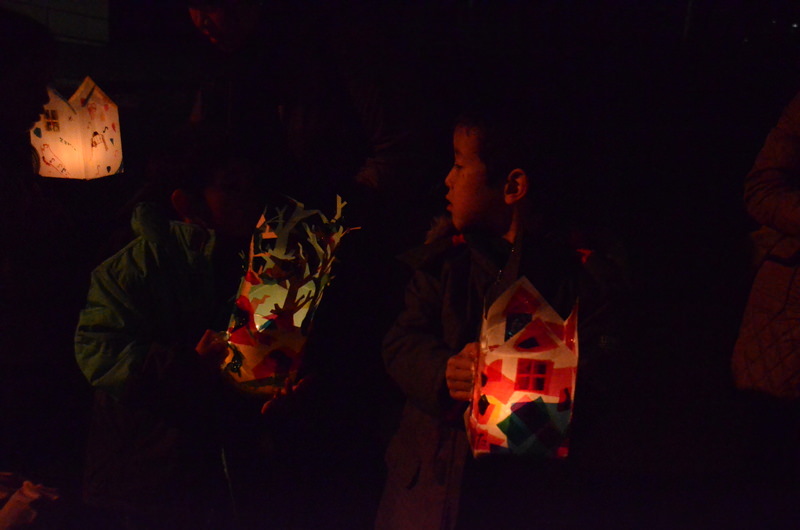 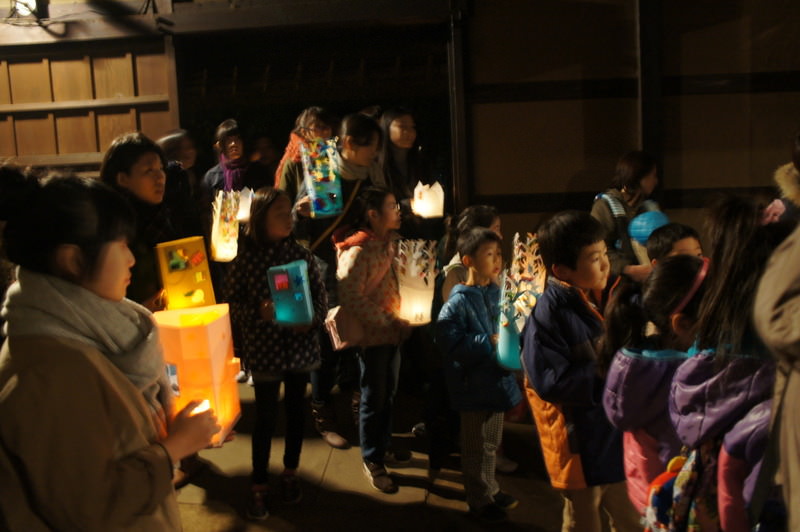 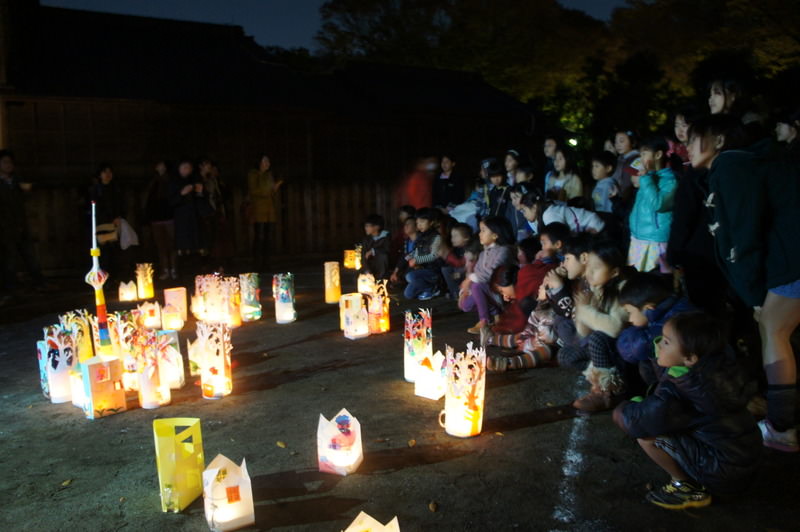 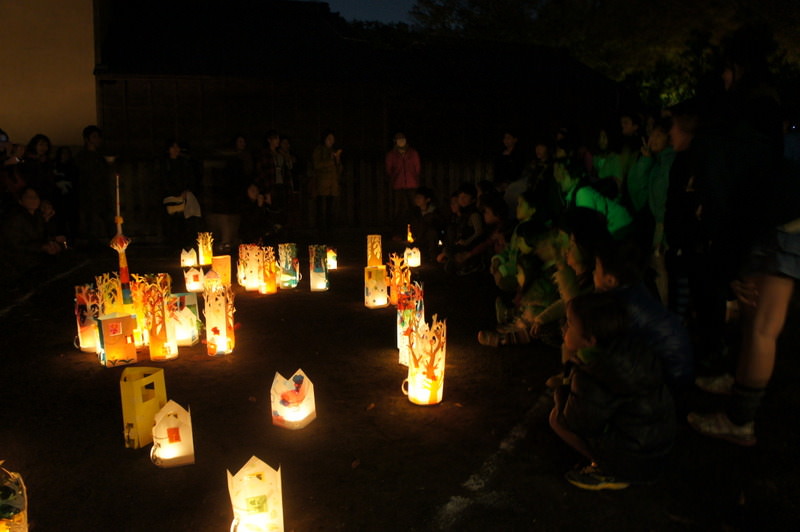 When the lantern was completed, the parade in the park started at last. When children went out from a bright room to a dark outdoor, the tension of children also increased. We lit each lantern, and children screamed with saying “Wow ~, it is pretty!”. That is the happiest moment when we are doing a workshop.

It was the first time for children to walk with fire, so we warned children to pay attention to fire. The fire is beautiful to see, but it is also dangerous.This is one of important learning. We talked about it and started parade. As we went through the crowded garden with lit lanterns, other guests praised lanterns and the children seemed very happy and proud. Going through the light-up of autumn leaves, an old houses, and dark forest, children arrived at the square and put their lanterns to create a town. There were a variety of children, such as children who want to have a lively city and children who want to keep their houses quietly in dark places, but we felt that they tended to be relatively dense.

We commented that sometimes even at home we would like you to turn off electricity and spend time with the lights of the lanterns, and finished the event.（Noriko Higashi）

Theme: Into the Water Interviewer:Yusuke Hattori Hattori：Your first diving experience was five years ago near Malaysia`s Tioman Island, is that right. Was it really your first time? Mende：Yes really. I wanted to go diving and so I went. I g…

From post-Olympic pride to the celebration of the 60th Anniversary of China as a nation, China is a very vibrant place. In this country where government is central, we discovered elaborate, but regulated lighting, lighting embellished by ec…

Ever since the new library was finished I have wanted to go and see it, so 15 members of the Lighting Detectives gathered around dusk for the Tama Art U. campus version of a city walking tour. It is well known that the architect is Toyo Ito…