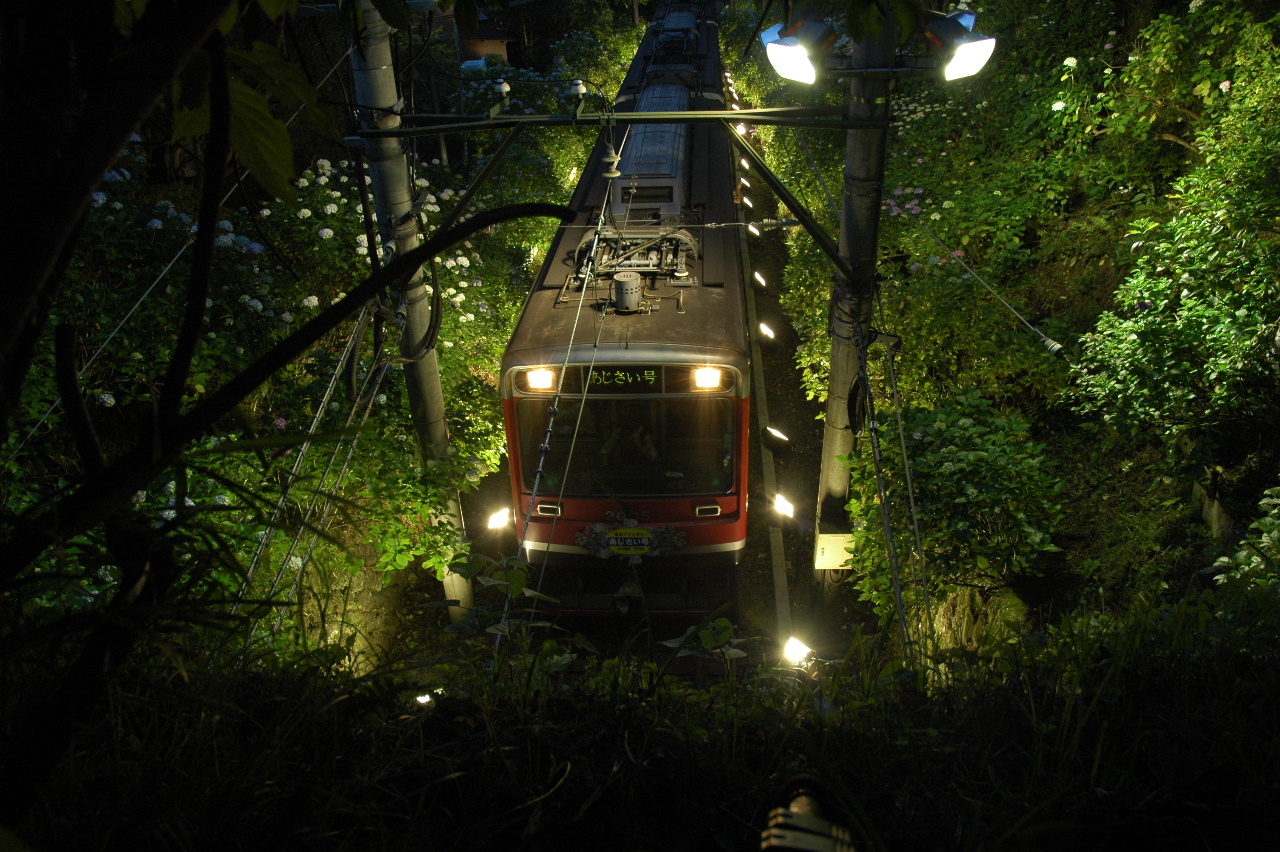 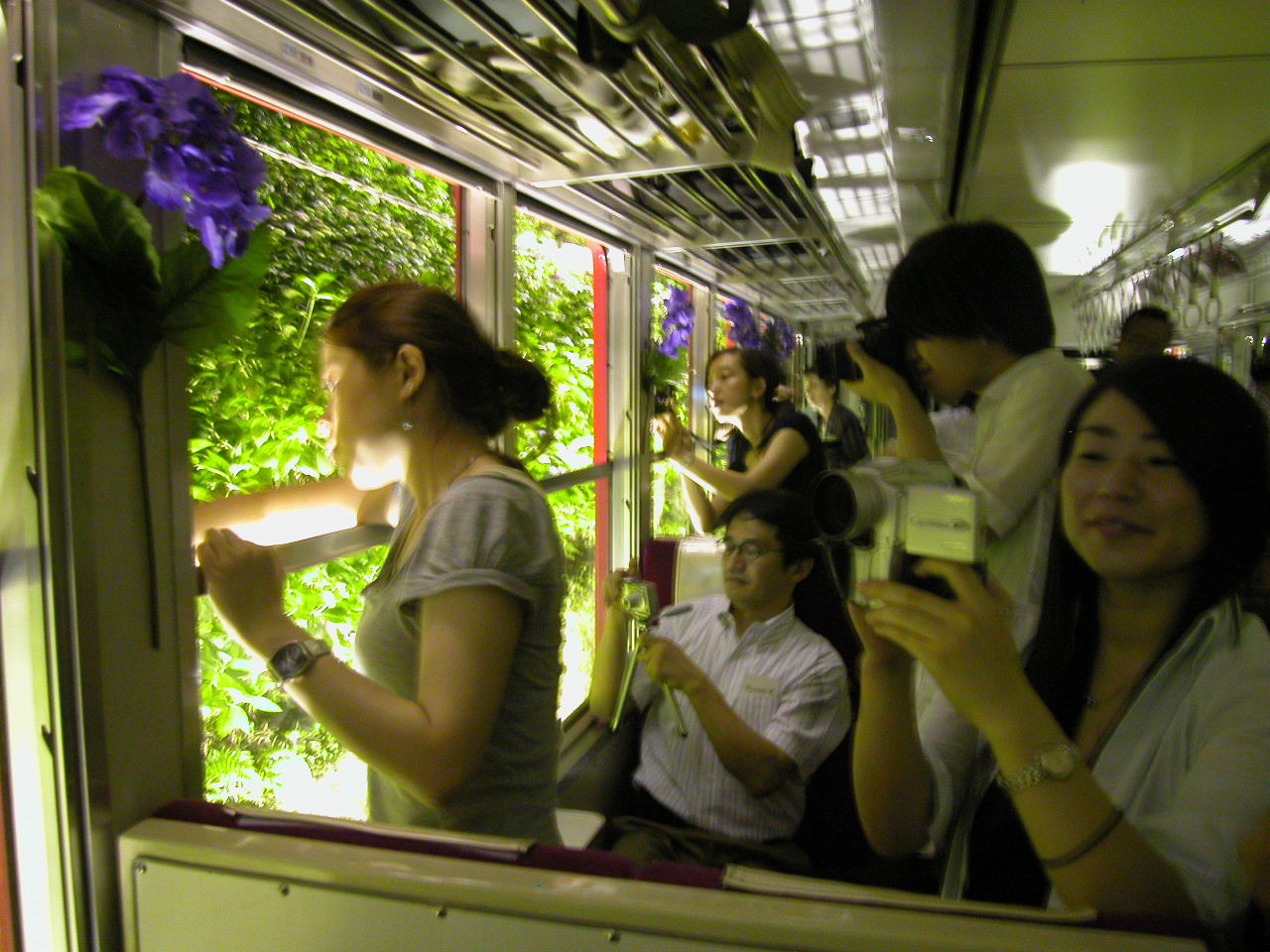 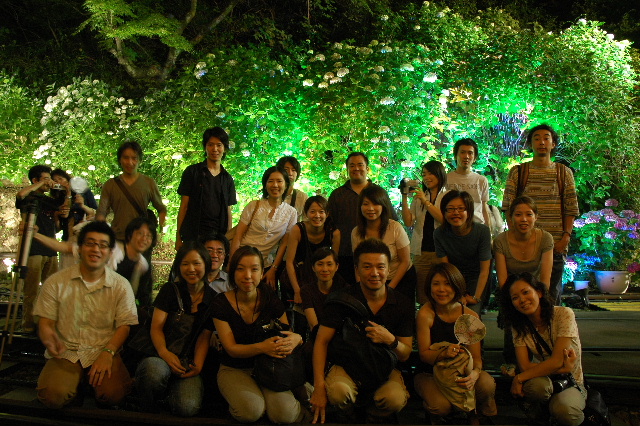 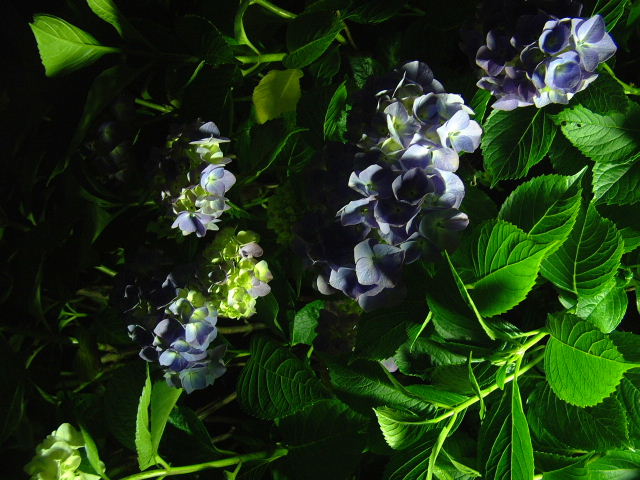 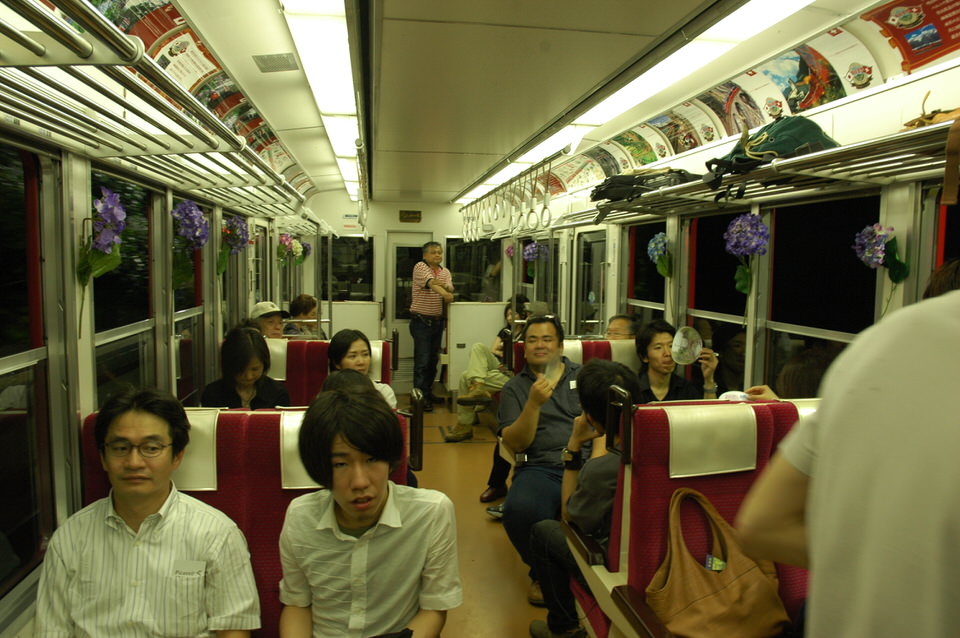 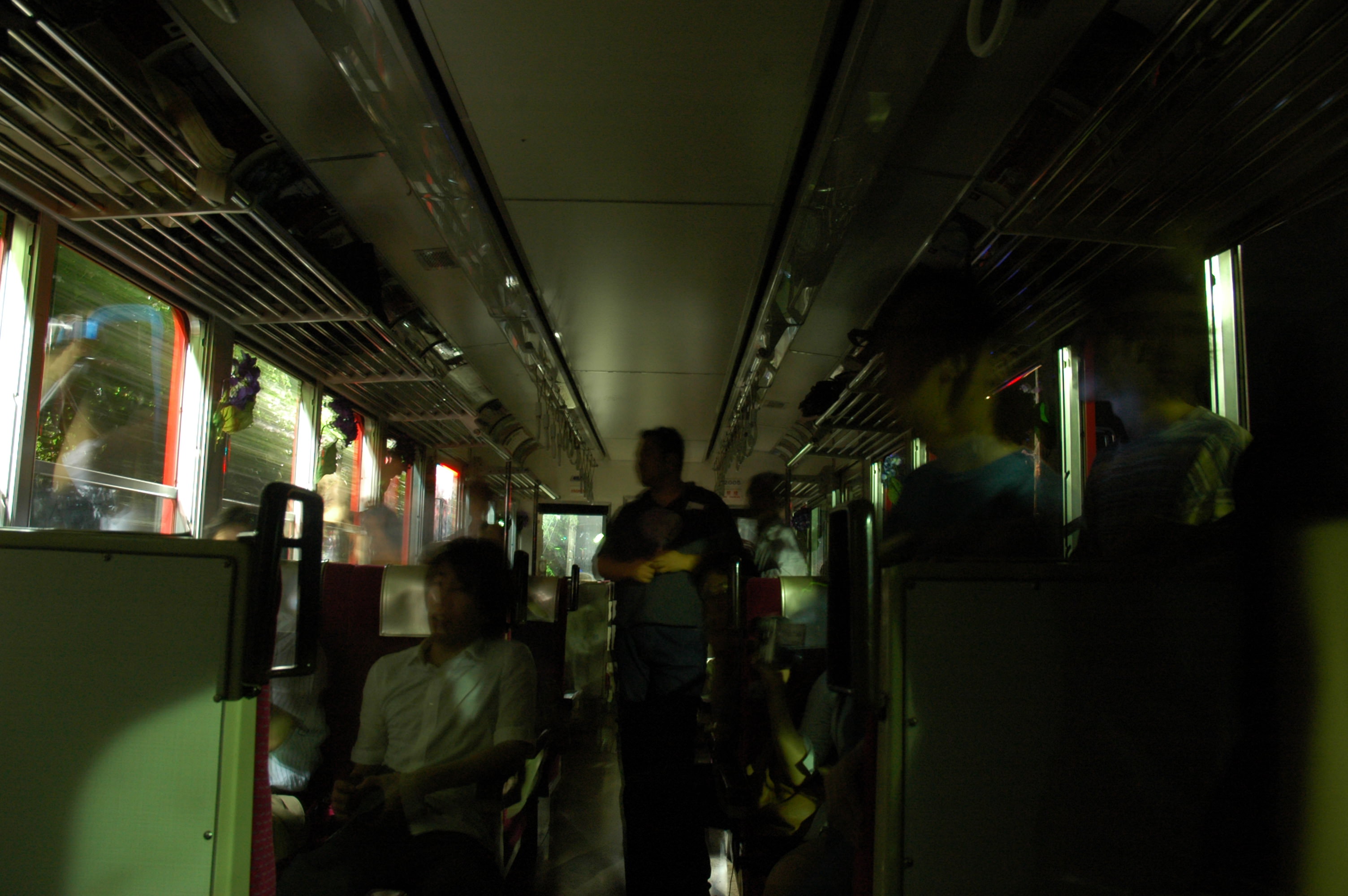 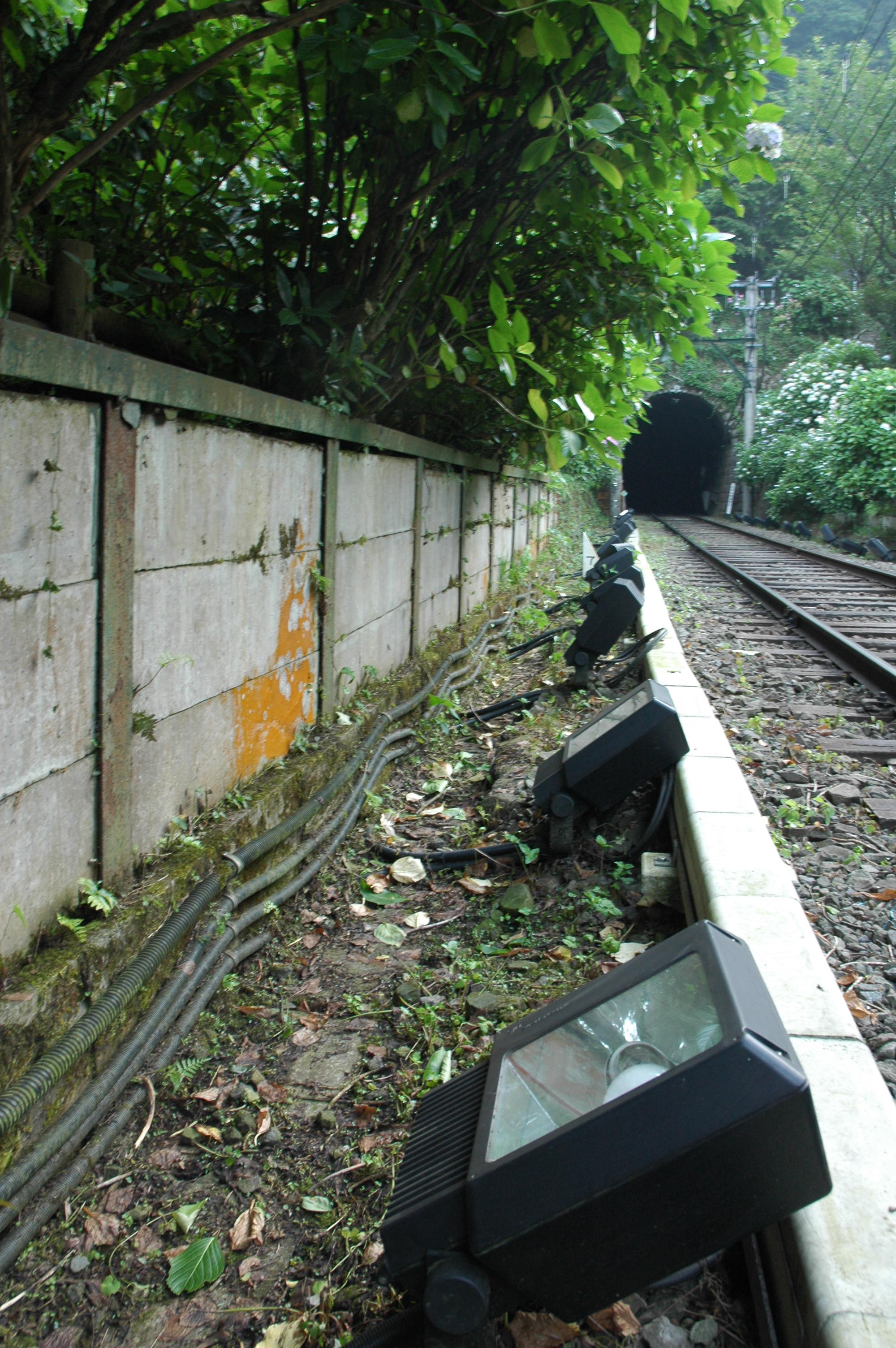 From Shinjuku to Hakone, we left Shinjuku Station one June evening on the Romance Train bound for the illumination of the beautiful hydrangea of the Hakone hills. From the Romance Train we all cramped into the small two-car train that would take us up the mountain and to the hydrangea.

The hydrangeas are in full bloom throughout the month of June and color the hillsides of Hakone in various tones of blues and pinks. To keep the fun going the flowers are illuminated and flower viewing continues into the night from the windows of the small train. As the train starts out the lights are dimmed and the passengers enjoy a relaxing ride up the mountain. After arriving at the main viewing point, all the car lights are turned off and the night air is a glow with the hydrangea illumination. The small train moving through the mountain blackness was calming, but sitting in that dark train car and experiencing the lights outside was a surreal experience. At the final destination, Miyanoshita Station, the passengers are allowed off the train to view and take pictures of the flowers and lights.

On the way home, various opinions of the illumination were tossed around. “When illuminated from below the light source is visible and too bright for the eye. It might be better from above?” “It was a good idea to create certain condensed areas of illuminated flowers, but if the light sources were attached to the train, passengers would be able to view all of the flowers.” “The fluorescent train car lights were too abruptly turned on at the final destination point. Something needs to be done about that!!”

Tonight, the hydrangea showed us many different faces under the spotlight, but there is always room for improvement in the lighting methods. Although, I have to admit the sun does the best job of illuminating these beautiful mountain flowers!

Around the world there are 150 different types of hydrangea and once planted the color of the flowers is decided by the nature of the soil. Tonight the Lighting Detectives excitedly awaited the flower covered hillsides as they conversed and ate station lunch boxes on the 90 minute journey to the hills of hakone to take part in the hydrangea night viewing festival.

Normally the train cars are brightly lit, but in order to see the flower illumination the lights were dimmed or turned completely off. Some of the bushes along the way weren’t yet in full bloom, but fireflies zipping around the dark hills and a lively tour guide made for an all-smiles lighting survey.

To get the most out of our survey we split up into 4 teams and each covered a different area. One team observed the illumination from the train car windows and three teams surveyed outside around Ohiradai, Miyanoshita Station, and the sculpture garden.

The flowers were the prettiest at Ohiradai. It was a picture taking marathon as observers were everywhere snapping the shutter.

The mountain train stopped for about 10 minutes at this last station before returning to Hakone. Red, blue, and green color lighting was used to illuminate the flowers at this station.

At this train crossing we reencountered the hydrangea in full bloom. Fixtures were positioned on the ground and invisible from inside the train, but unfortunately, glare from the fixtures was still visible. The effects are really visible in the photographs we took and all of this could have been prevented is hoods or levers were used to control the lighting distribution of the fixtures. At dusk and in the afterglow of the sunset, the flowers were dramatically lit from below, but as it got darker the expression of the flowers and light didn’t change for the better.

4. Inside the Hydrangea Train

On any other day the inside of the train would be bright with not shadows and all passengers and objects would appear flat. But the dimmed train actually enhanced the atmosphere and mood of the train. The guided tour started off by announcing that this was not an out of season Christmas illumination, but as the fireflies zipped by the blacked windows something felt surreal. It was such a fantastic and unusual night that my eyes welled with tears.

The design of the Lyon nightscape is a joint venture between the government and the citizens. Various lighting materials are used by trail and error throughout the city to create its lightscape. Standing on a street corner one gets the impr…

RE-IMAGINING GOLDEN MILE 2019.11.01 Sherri Goh+Niken Wulandari Sutanto+Quratuaini Jamil+Clement Lee Golden Mile Complex and Golden Mile Tower are two of the most iconic buildings in Singapore that were completed between 1973-1974. Lighting …

Already it has been seven years since I started to teach in the Department of Scenography, Display, and Fashion Design at Musashino Art University. Of course, I am not only teaching my students about lighting design, but the third-year stud…

17 November, 2005 This month the Lighting Detectives rallied at the new Endo Lighting Corp. Aoyama Showroom for a bigger and better version of the regular salon session. The showroom accommodated 60+ detectives, a 3-screen slide show, and e…