Sore Neck after a Magical Tour of Ginza 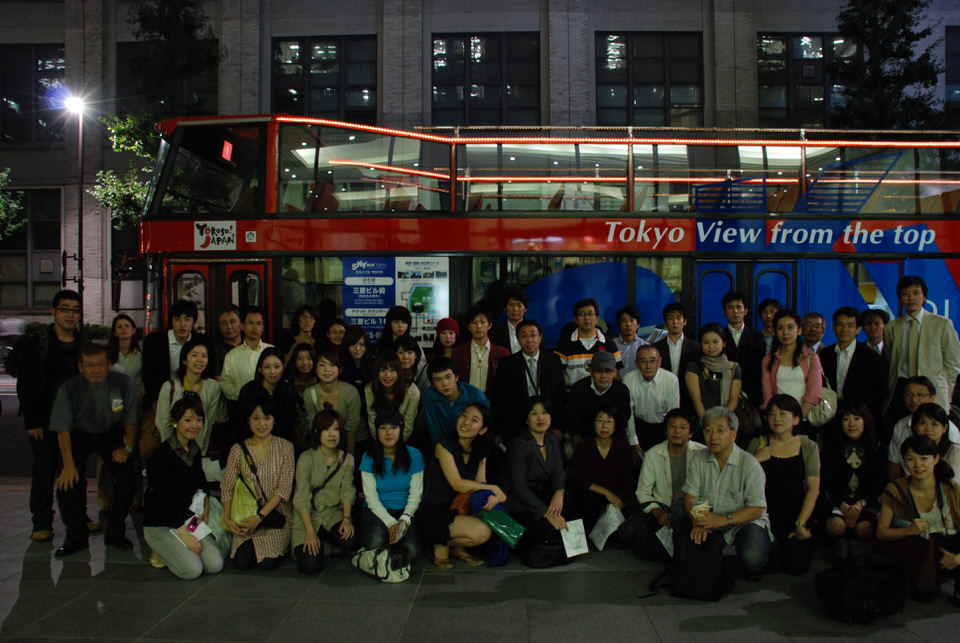 Group photo in Marunouchi before the start of the tour. An air of excitement and anticipation as members boarded the bus for the 2-hour night tour of Tokyo. 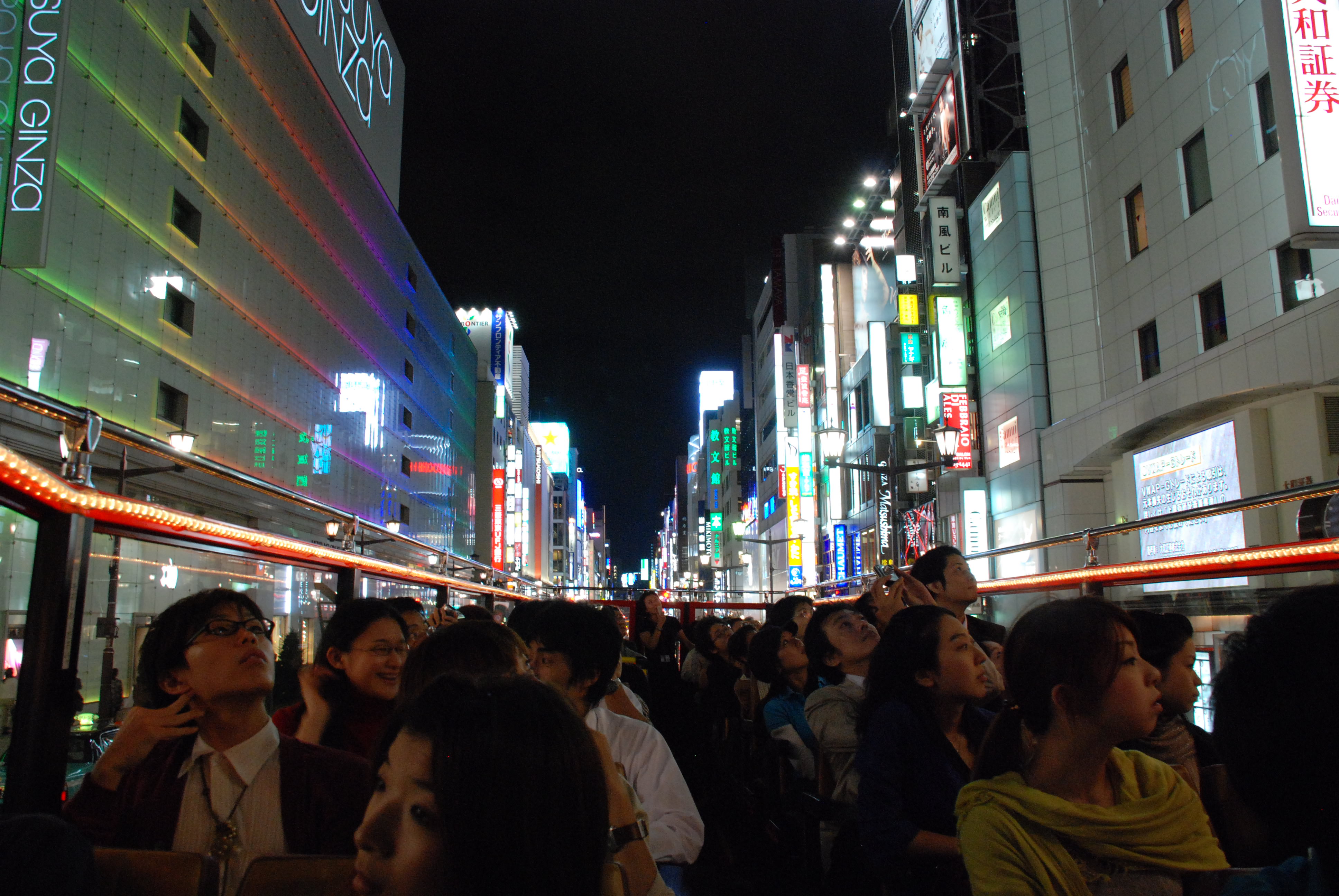 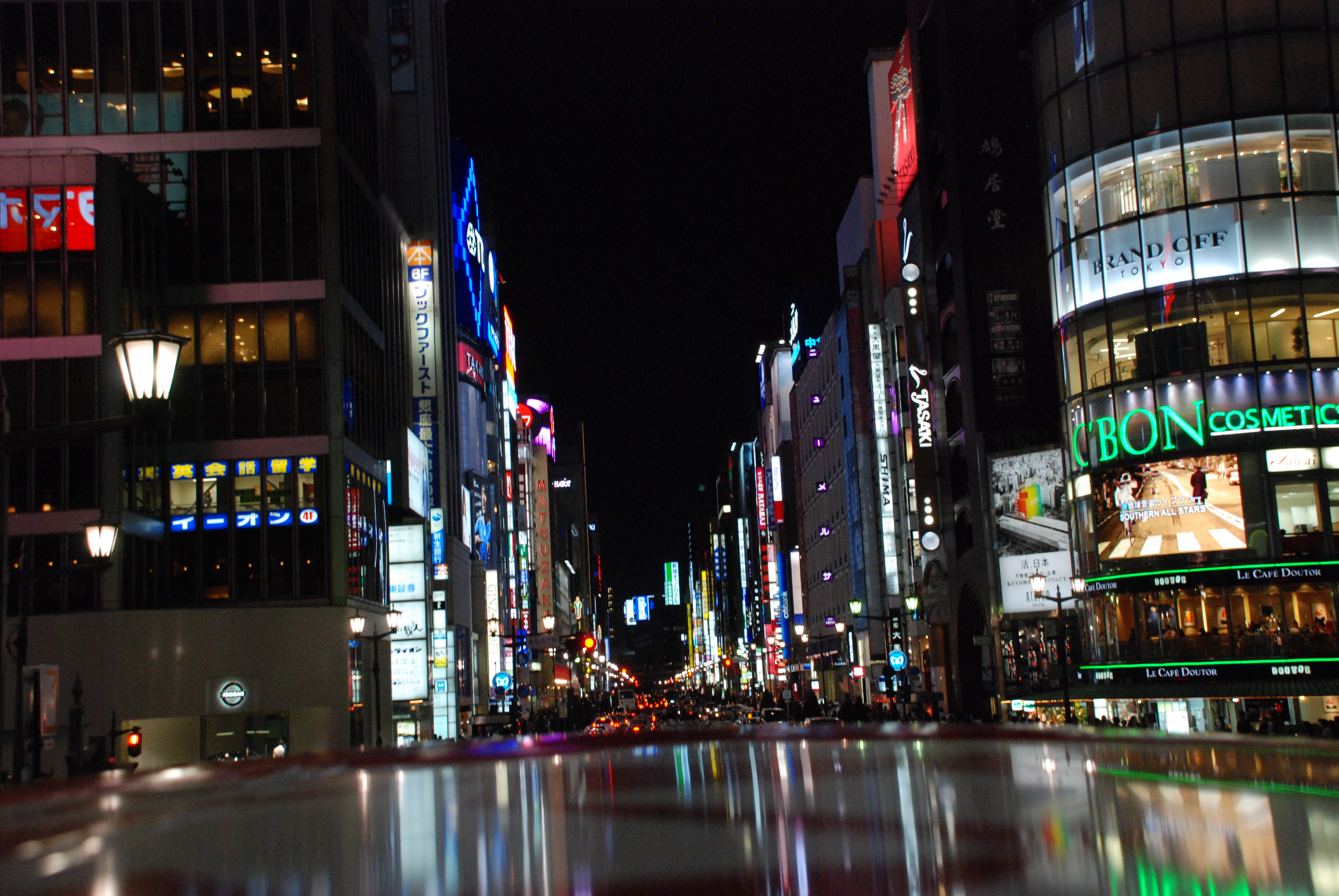 Driving through the heart of Ginza was the highlight for many on the tour. New and old methods for street and facade lighting were on parade, an excellent opportunity for comparing and contrasting lighting eras. 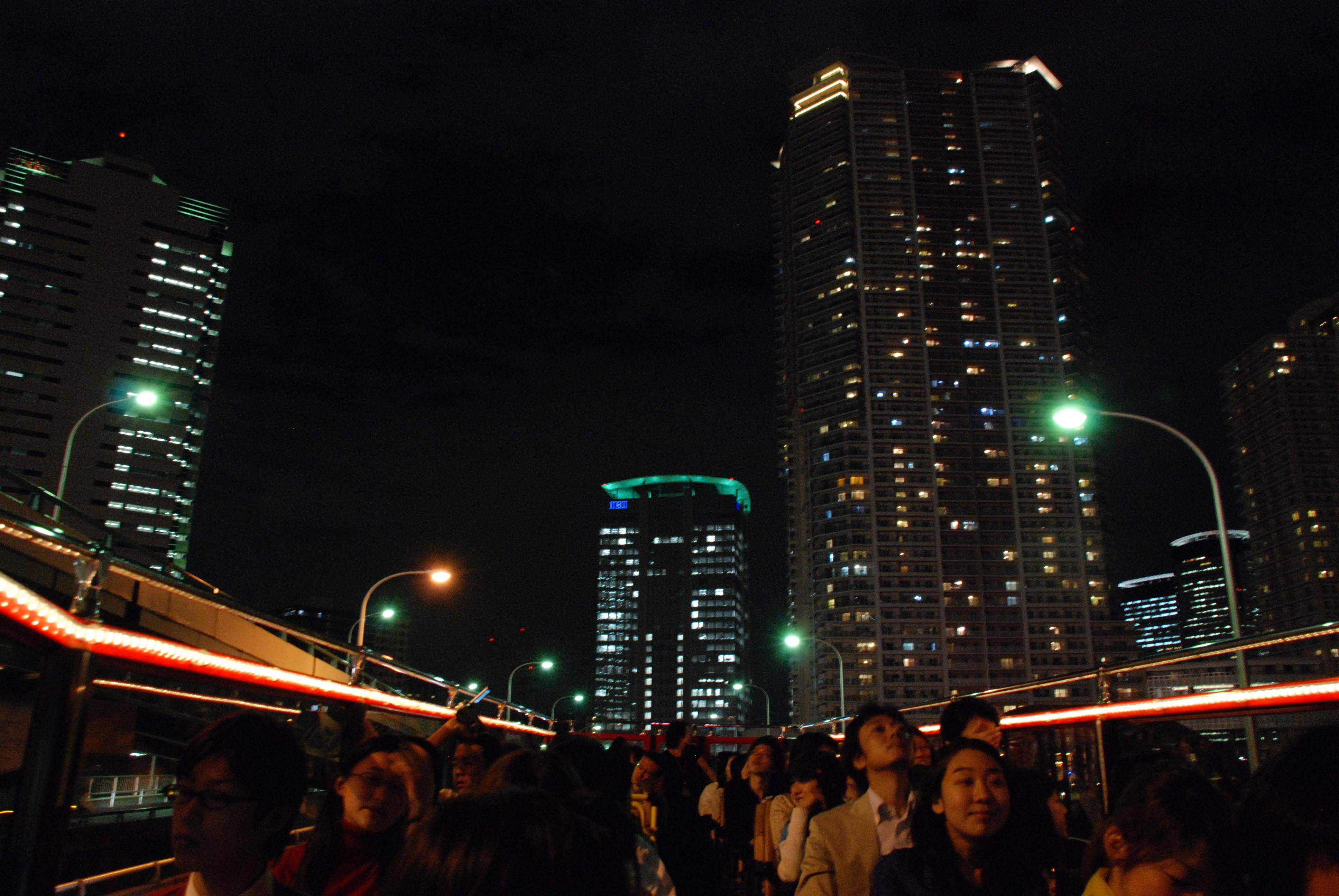 Office tower lighting and residential condominium lighting dominated the scene on the drive back from Odaiba to Marunouchi. While white fluorescent lighting was the predominate color some condominiums glowed a soft orange. 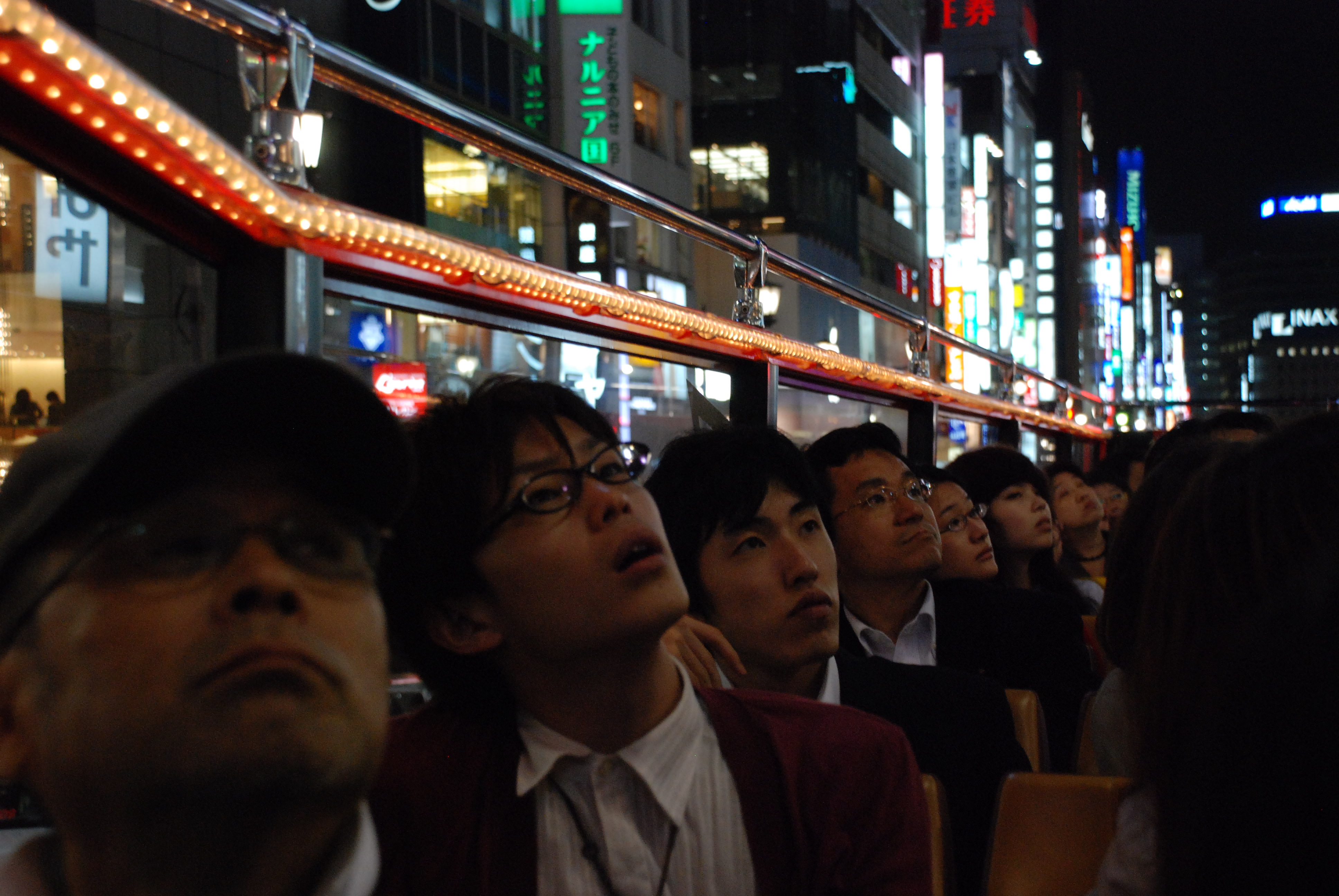 Members all had stiff necks after 2-hours of continuous looking up, but nobody seemed to mind. Chatter even died down as the bus started along the route, as members seemed to take this opportunity very seriously.

On this bus tour I accomplished something that I am too embarrassed to do any other day; Crank my head back and look up as we drove through the streets!

As anybody knows, Tokyo is overgrown with buildings. Looking up at them while walking through the streets is a no-no, as most people might think you are a hillbilly fresh off the countryside express. However, the sky bus tour gave me and everyone else on the tour a good excuse to have a sore neck. This is a thrill found only in the city! While driving down the main streets of Ginza and through its forest of buildings my mouth was open in wonderment. Seated on the top of the double-decker bus, no heads were blocking the view and both sides of the streets and all of its colorful lights were in full vantage point, with glimpse of the Tokyo night sky in between buildings. In my mind, our small bus tour dominated the scene, as all else seemed to melt into nothingness.

The Appeal of Ginza Lights!?

This was my first time to participate in a Lighting Detective activity and what a spectacular introduction into the culture of lighting! This bus tour provided a very unique view of the city.

The bus started near Tokyo Station and continued around the Imperial Palace and through Kasumigaseki. Because of all the trees and foliage and lack of businesses and other buildings, the area around the Imperial Palace is dark and quiet, but with a serene atmosphere. In comparison, Kasamigaseki is full of government buildings with many windows brightly lit with white light as the many agencies and ministries work late into the night. The bus cruised past Hibiya Park and down the middle of Ginza covering its main eight blocks. This was the brightest place on the tour, as well as the most memorable. All of the world famous brand boutiques have fabulously designed facades and lighting to match. Most advertisements and billboards in the area have shifted away from the use of upward facing floods lights to luminous signage. Each separate boutique has its own unique design, artisan beauty, and charm, but, in total, is it all in balance? Is this the appeal and enticement of Ginza? I was left with many questions in my mind.

The Long View of Tokyo

It`s a rare thing to drive through the main streets of Tokyo, but even rarer to be seated on a double-decker bus night tour of Tokyo! Not only is your view transformed from a pedestrian on the sidewalk to the top of a bus, but also driving down the middle of Ginza and across the Rainbow Bridge are one-chance opportunities. The intimate tour of Ginza`s main drag and its famous boutiques was exceptional in itself, but my personal favorite was the long view of Tokyo from the Rainbow Bridge and Odaiba. Up close Tokyo is a very bright and lively place, but as the skyline shimmered in the Tokyo Bay, you tend to forget all of the bustle and overly bright signage of the megalopolis and focus on the bigger picture. While white light and luminous signage dominate this view, it is easier to digest against the black waters of the bay than when it is just a few feet away. It is actually somewhat relaxing to view the city for afar and Odaiba is a fantastic place to do just that.

12 July 2005 The best part about the Ginza Distirct is that it is mirror of present times and its trends. And just by looking at boutiques such as, Chanel, Louise Vitton, or Christian Dior, one can see that a catchy facade is the latest arc…

28 July, 2005 At this session there were only a few topics on the table, which gave members an opportunity to discuss, in-depth, new products and ideas from the New York City Lighting Fair, the direction of and trends in Ginza lighting, and…