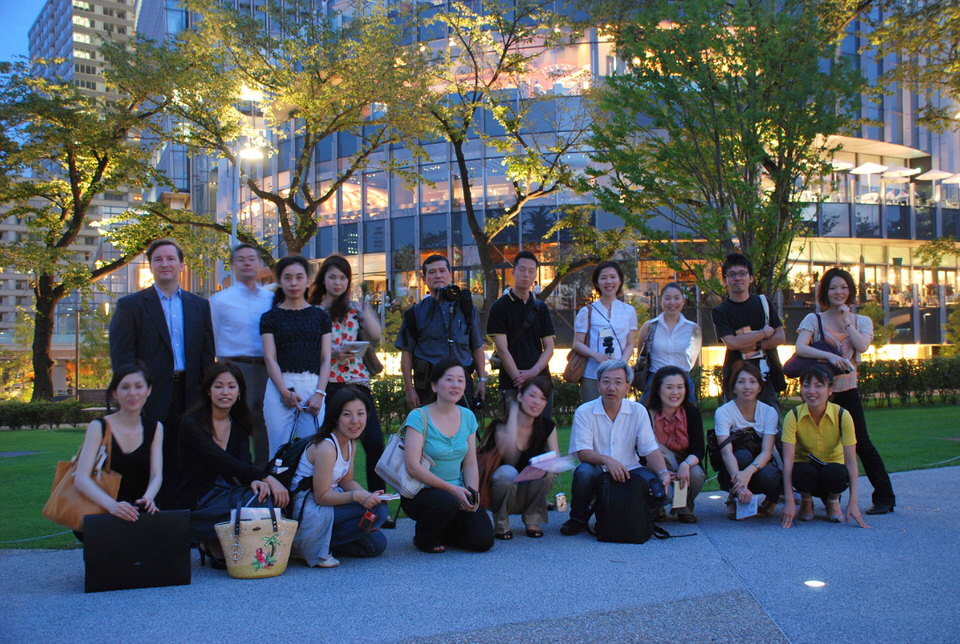 Searching for Heroes and Villains of Light The Roppongi One-Mile. In a one-mile radius (1.6 km), there are over 40 embassies, 9 international schools, and National Art Center, Mori Art Museum, and Suntory Museum of Art completing a triangle of art. In the center of where world cultures and arts clash, Roppongi, Tokyo Midtown is trying to become a base for transmitting Japanese Design to the rest of the world. In this new landmark of Tokyo, Lighting Detective members went in search of Heroes and Villains of Light. See what they found in this new urban environment.

Heroes and Villains …by: yuji sato 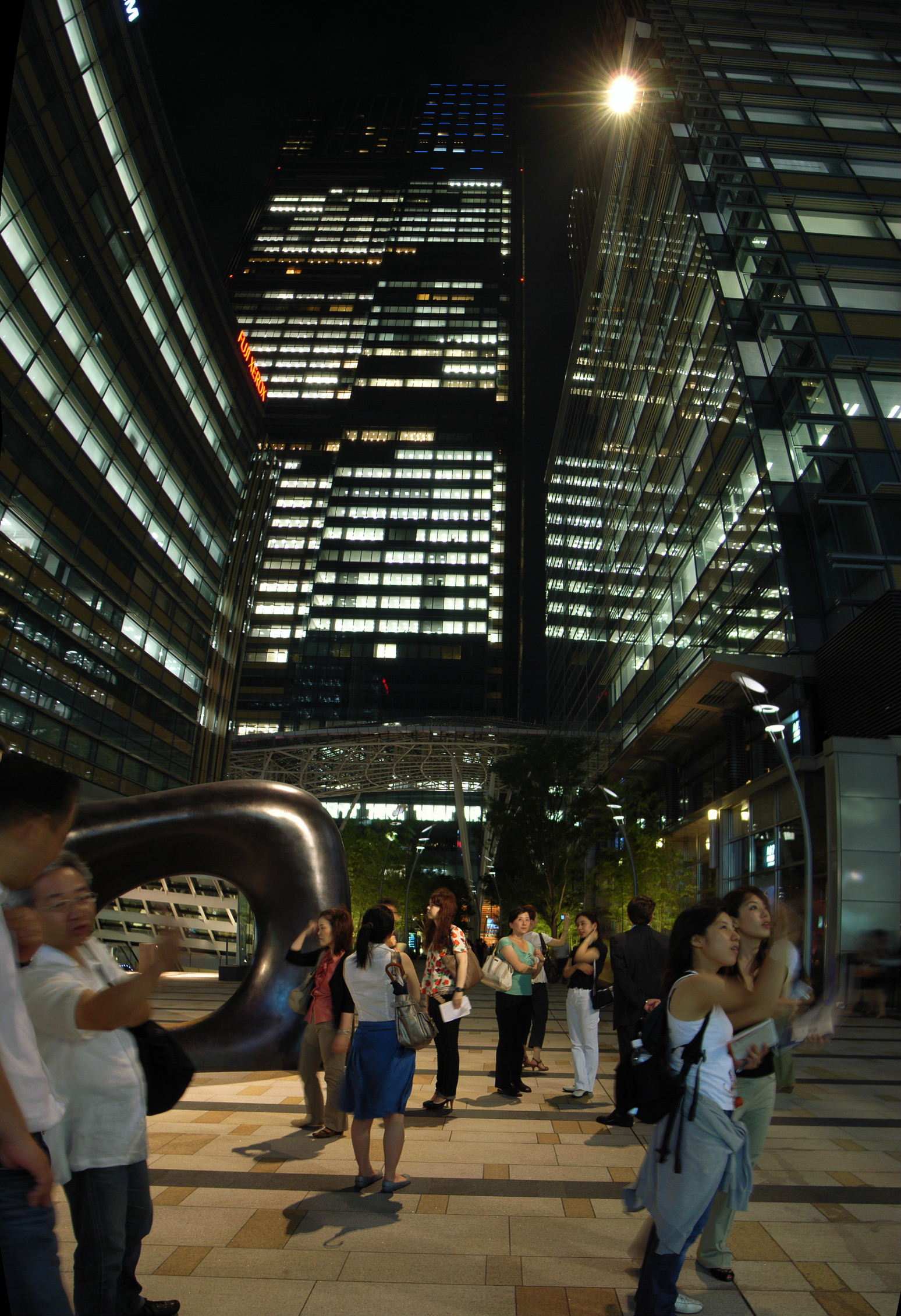 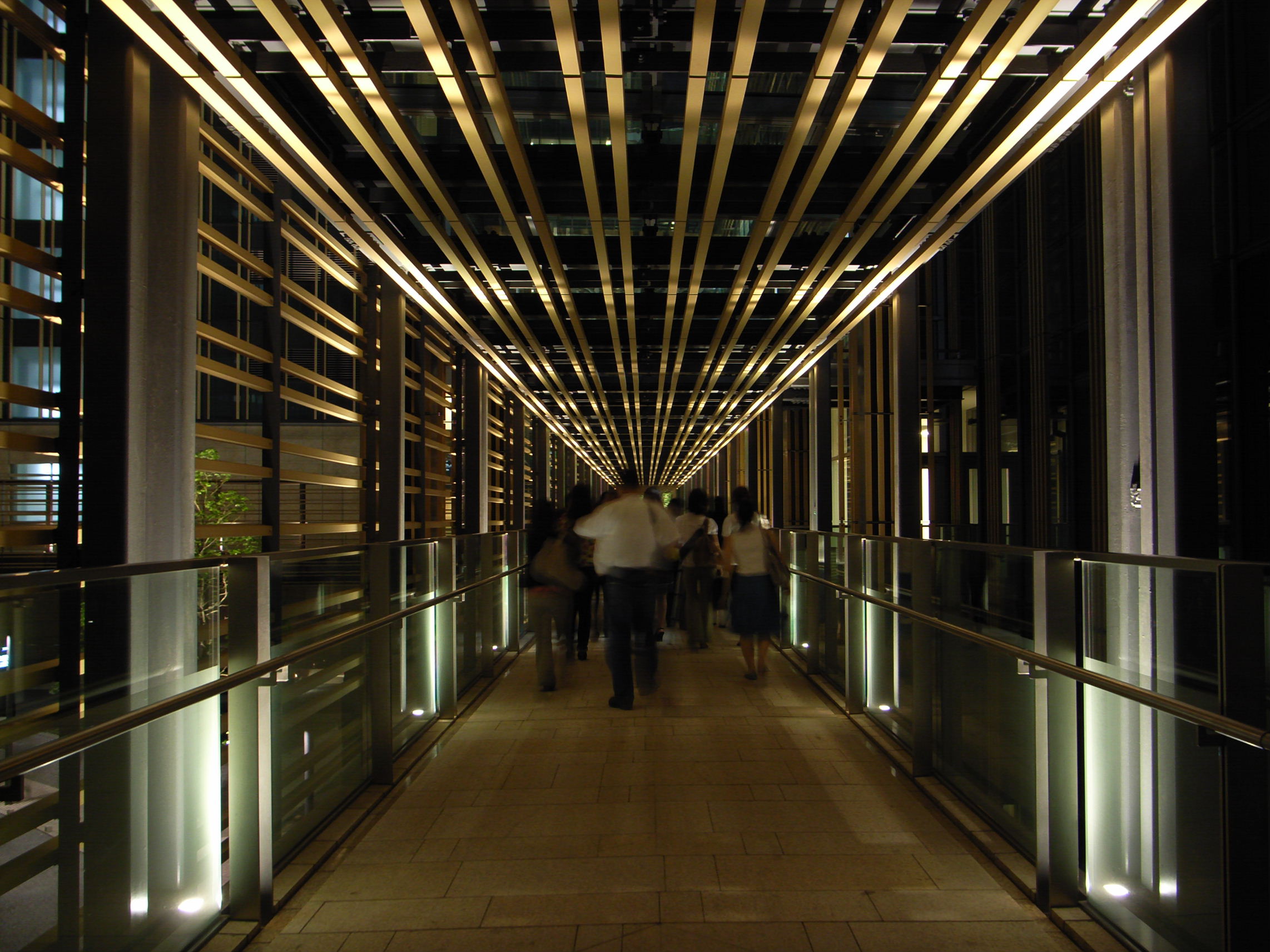 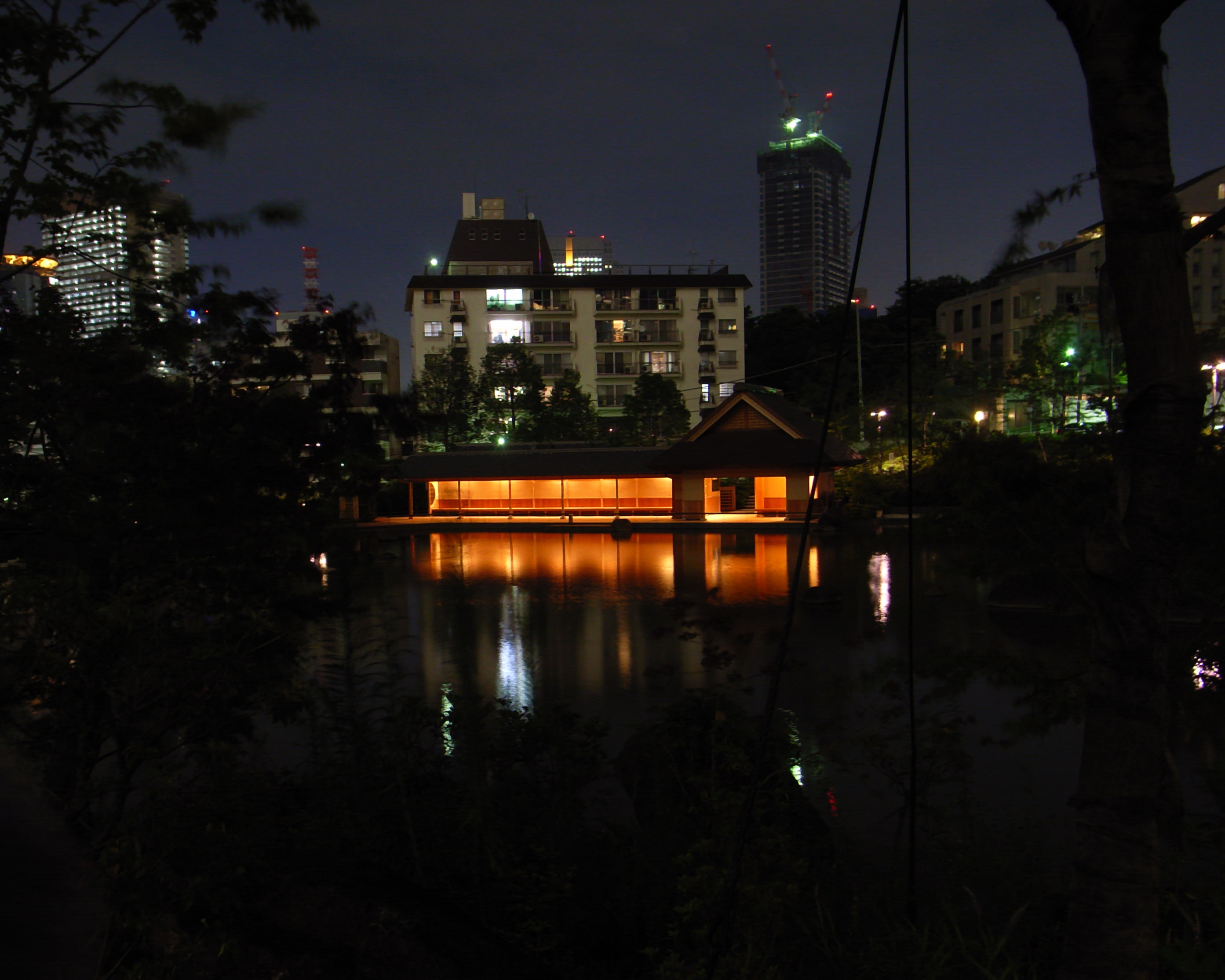 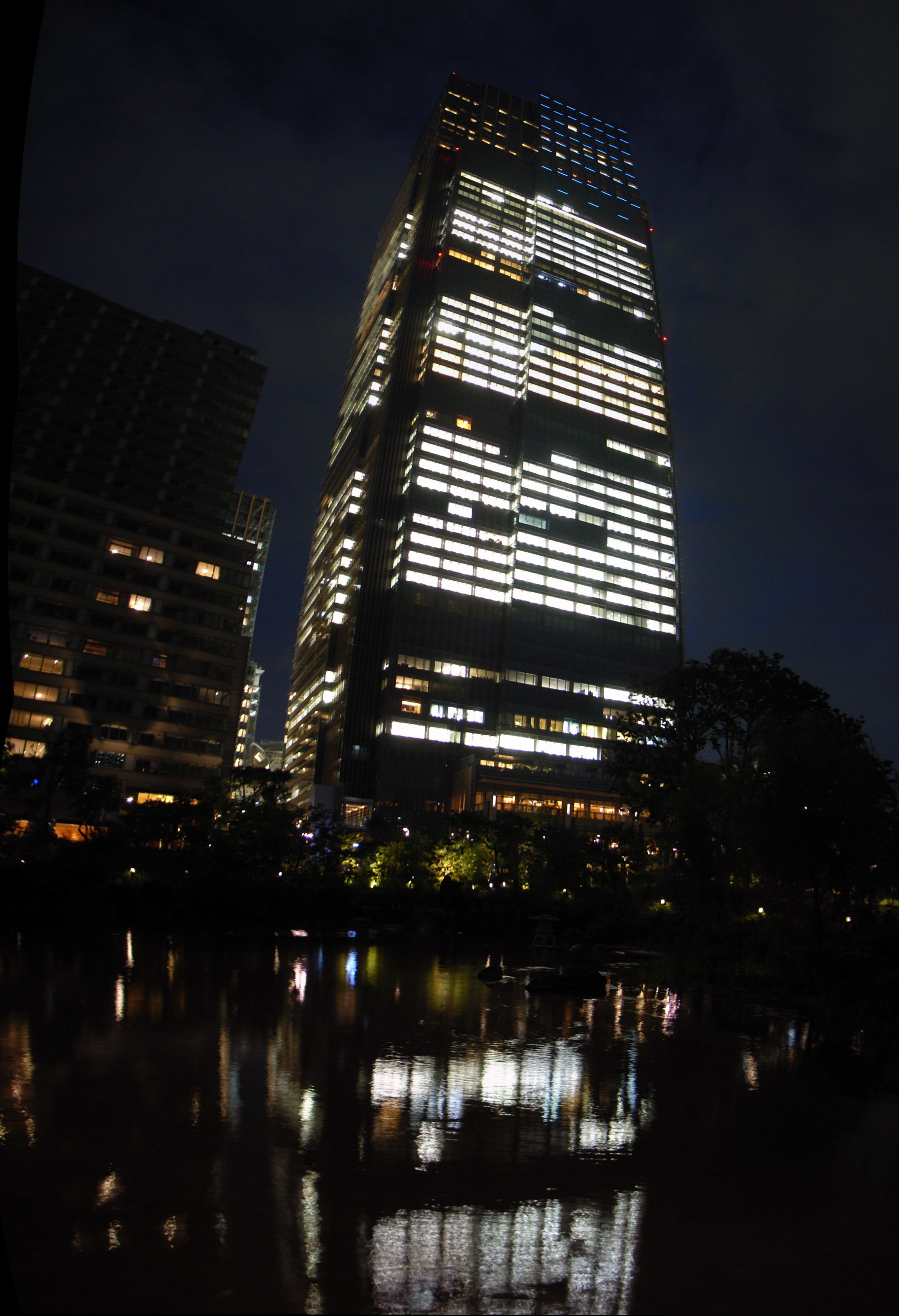 My overall impression is of a typical commercial facility catering to adults with a well-balanced lighting plan.

Prime example of a lighting hero is the unified appearance of the Galleria interior. Inside, simple translucent signage with black lettering gives the interior a clean-cut feeling. A single warm-colored fluorescent lamp in the bottom of the sign creates a beautiful gradation. The signs are also mounted at the perfect high, not blocked by people’s heads and all visible with one glance down the corridor. The shopping area has the feeling of a European high fashion street with most shops also using halogen lamps or similar low color temperature lamps to create a posh and unified space.

The second lighting hero I`d like to recognize is the small gallery space along the large columns in the atrium. The luminance and color temperature are high, but the blueish-white LED`s seems to capture the charm of the glass objects on display. Because the color temperature is different than that of the shops, it seems to draw more attention.

Overall, I could give the lighting plan a gold star, but looking at smaller parts of the whole, like not enough clearance for the cove lighting and the lamps are exposed; or the irregularity of light in the luminous wall; or the overabundance of downlights; or the intensity of the luminous ceiling are all villains in my book. Even if there where problems at the time of construction, I felt a little over-optimism about the whole project. As lighting designers we need to strive for what the famous architect Mies van der Rohe once said, “God dwells in the details.”

Heroes and Villains …by: shigeki fuji

My personal lighting hero is actually the shadows of Hinokicho Park on the eastside of Midtown. Once a famous garden during the Edo period the original name of this ancient and honored area is “Shimizu Garden,” but now it rests quietly in the dark shadows of the Midtown towers. From the Japanese-style rest area, the Midtown Towers are reflected in the still pond and, from the opposite shore, the rest area reflects silently on the surface of the water. The modern towers and the traditional style of the garden, both reflecting quietly in the same pond and surrounded by the same still night is a very dramatic image.

My lighting villains are a few example of useless brightness. Because the complex is a great space to relax and enjoy, my eyes involuntarily found many lighting details that were less then pleasing. From the pedestrian bridge near the Ritz Carlton the tree up lights are a direct hit in the eyes and the ceiling up lights are fully exposed. Indirect lighting is used to control horizontal luminance levels while create comfortable spaces, with no use for unnecessary brightness.

Heroes and Villains …by: aiko furukawa

My lighting hero is the control of low horizontal luminance levels in the Galleria. Indirect ceiling cove lighting, and luminous signage along the vertical planes help keep the luminance levels down, but the space is comfortably lit making it feel expansive.

My lighting Villain is the rowing of glaring emergency pole lights near the Japanese garden. One could spend all day in this beautiful garden, but as soon as the sunsets the lights spoil the experience.

After Roppongi Hills, one could call Tokyo Midtown the second Roppongi Landmark, but I was hoping for a lighting plan to clearly distinguish the two. Five years have elapsed, but, unfortunately, Midtown lacks freshness, new technology, and originality in its light
ing plan.

Heroes and Villains …by: mayumi ayasuda

This was my first city walk. Ascending the escalator from the basement floor, my lighting hero was the great chemistry created by water and light in this space. Natural daylight fills this space by day and would be just beautiful if moonlight had the same effect. Even though Roppongi is in the middle of an urban area I still dream about the possibility. The seasonal cafe in the grass square is another favorite area. Many people gather at this open-air venue giving it an air of festive excitement.

Along the walk I saw many places where I thought there was an overuse of light. The statues in the plaza seemed like they were in a photo-shoot it was so bright. Hard to say if this is appealing to the adult crowd. Many different trees were also planted along perimeter of the complex, but unfortunately not up lit at night.

Date: September 22nd, 2005 Program: City Tour, Symposium Venue: AIA Center for Architecture It was another beautiful autumn day in New York City for the 4th Annual Transnational Tanteidan Forum. It all started 4 years again in 2001 with the…

It was 8:15 on the morning of August 6, 1945 when the first of two bombs dropped on Hiroshima then Nagasaki. Sixty-one years have passed since this memorable day and every year victims are remembered in a peace memorial ceremony attended by…