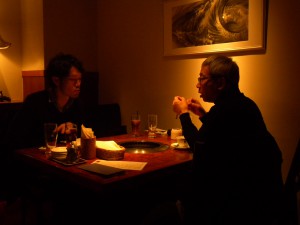 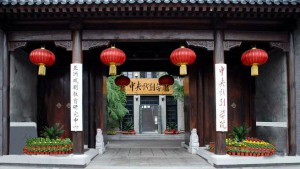 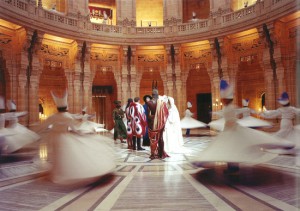 Watanabe: Today, I`d like to talk about “Architecture Lighting and Stage Lighting.”   At the university, I majored in stage lighting.

Mende: What sparked your interest in stage lighting?

Watanabe: Since I was little, I love to watch movies and theatre.  After graduating high school I had the vague idea that I wanted to go abroad, so I decided to go on a language exchange in China.   After about a year, I had the opportunity to go to a college theatre production.  Chinese stage lighting is very flamboyant!  This is the first time I really thought about stage lighting.  Later I decided to study at this university.

Mende: Why did you move towards architectural lighting while you were studying stage lighting.

Watanabe: While studying stage lighting, I realized and felt like there were limits or constraints in this field.  I felt like I needed to work with lighting design that is closer to our daily lives and society in general and started to focus on architectural lighting.

Watanabe: I think there are several differences. Even during the design phase of stage lighting, it is a very hands-on approach to design.  A Lot of time is spent at the theater and directly working on the stage.

Watanabe: Also with stage lighting,  based on each performance, various aspects are subject to change.    With architectural lighting, if you try something and doesn’t work well, you don’t try that design again.

Mende: Stage lighting and architectural lighting seem very similar, but are actually very different.  I think stage lighting is a test of how well you can create a fake world for the audience`s pleasure.   Using visual and auditory tricks to create a fictional world and then being able to pull the audience into it.   On the other hand, the world of architecture is very realistic and allows no room for mistakes.  Design is based on safety and rationality.   To say stage lighting has constraints and is stuffy is not the whole picture.  The profession of design, itself, has shackles.  Designers have to persuade many people to get anything done, along with many other challenges.

Maybe the most outstanding characteristic of stage lighting is how to proceed with controlling the dark.   For example, in a very condensed period of time, lighting is eliminated from the space by very subtle dimming control systems, or various colored lights are used for scenes.   In this fashion, stage lighting seems more flexible in terms of lighting effects than architectural lighting.   Historically, burning torches were used as stage lighting, a kind of non-electrical form of the spotlight.  At night they performed under the dim light of the moon.

Watanabe: Do you have any influences from stage lighting?

Mende: From stage lighting, we can learn how to create a specific moment in time.  During a short time frame of a two-hour performance, they use many tricks and effects to make us believe two hours was really 25 years or one minute was one hour.

You are still inexperienced in architectural design, but go to the theatre and watch lots of movies.  I want you to soak up all the information, technology, and techniques stage lighting design has to offer and then give LPA staff feedback.   I think there is lighting out there that only you can design.

Watanabe: Thank you.  This gives me a sort of a goal or direction that I can work towards from today.   I`ll try not just to lay around on the weekends, but go to the theatre and watch movies so I can become a very unique lighting designer.

Interviewer: Misuzu Nakamura Thme：Waterscapes with Light Nakamura Ok.  So, today I thought we could talk about waterscapes with light.  I just got back from a trip to survey the urban lightscape of Bangkok.   The scenery along the rivers an…

Interviewer: Misa Fujii A Love letter from Kaoru Mende: Dear Misa, I think you are a person with a lot of vitality and an amazing lighting designer.   When I say “Feel free to think freely,”  you always seem to come up with a killer idea, u…

Interviewer: Ai Sohara Theme：Fashion and Light , or maybe Women and Light Sohara： Today, I thought we could take a walk and visit Laforet Harajuku. Mende：Did you come shopping here when you were younger? Sohara：Oh ya!! I am a Tokyo native, …

23 April 2008 On this cool, spring evening we took our city walk to the Hachioji Campus of the Tama Art University to investigate the new library, completed in the spring of 2007. Professor Satoshi Tabuchi, who has been coordinating the arc…