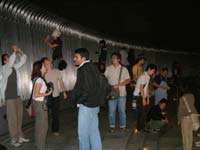 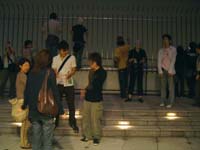 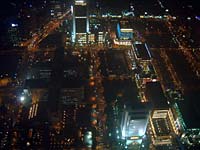 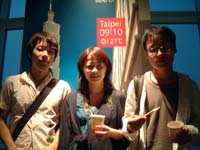 What does the picture to the right look like? A bunch of boy and girls locked up in a cage making a racket? Close, but take another look. Some in the group ARE climbing the high fence, but only to get a better view. This is the observation deck of the Taipei 101 Building with the LPA staff surveying the city nightscape.

At dusk we climbed the Taipei 101, the world’s tallest building at 508m. Unfortunately an unexpected high fence surrounds the open-air observation deck, a huge intrusion on the view. Some of the staff tried to get a better view by looking over the top, but scattered after being yelled at by the security guard. Some still wouldn’t climb down from the fence… Unfortunately, the Taipei nightscape does not have any distinguishing features, but only strange little dots of light scattered around the base of this building. Most of the LPA staff were a little disappointed, but have categorized Taipei as a comparatively tame Asian nightscape.

Taipei is famous for the manufacturing and wholesale of extremely cheap LED units, but the lights around the city are very much subdued. The reason I was surprised is because I have an image of Shanghai’s hyperactive lighting environment stuck in my head when it comes to Asia. Shanghai is one symbol of the recent development in China, but comparatively Taipei has a very individual style that is just starting to form.

Every year LPA goes on an all-staff retreat and this year both the Tokyo and Singapore offices, 30 staff members, gathered at a central location, Taipei, Taiwan. After a few last minute cancellations, 23 staff made the trip.

After our adventure at the Taipei 101, we all gathered around a huge round table for Taiwanese food and Chinese rice wine. I learned later that most stayed up late into the night, but I was snoring away!

The last picture is of 3 past students in my studio at Musashino Art University, now members of LPA staff.

Chicago is the birthplace of the skyscraper and a city with a refined style of its own. However, the nightscape is basically assembled for crime-prevention with streets over powered by high-pressure sodium lamps and wrapped in an orange haz…

Rich in local history and cultural facilities, Ueno Park covers a large area in the middle of Tokyo. Even though located in an urban setting, we anticipated a lighting environment completely different than the lights of downtown. Between th…