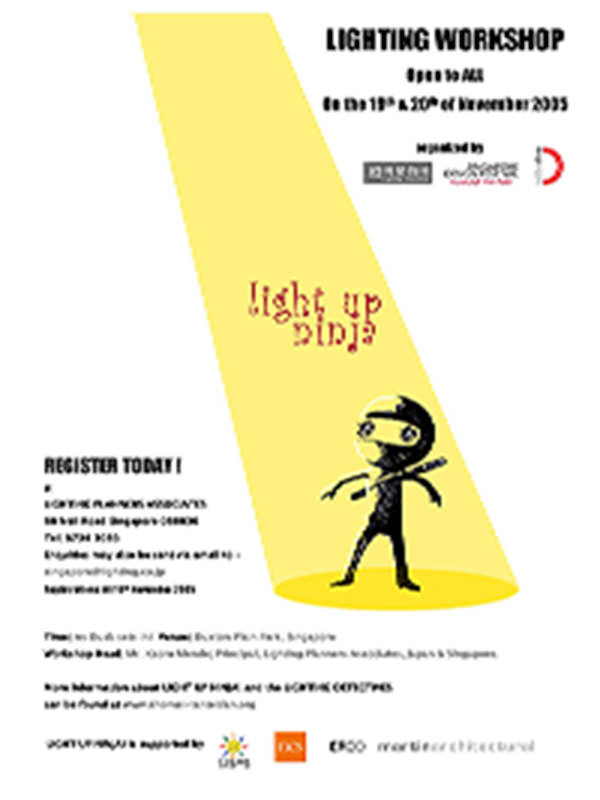 The Light Up Ninjas have a long history with the Lighting Detectives. The purpose of the original event was to sneak around illuminating the ordinary and everyday “street corner” and then sneak away without being detected. This one-night event’s original title was “Light Up Guerillas,” but because of unstable political conditions in southeast Asia “guerilla” was no longer an appropriate title. While the principal remains the same the name has been changed to the Light Up Ninjas.

The Tokyo and Singapore Chapter collaborated to brainstorm for a new name. Singapore`s Yah Li suggested “Light Up Ronin,” a wander on a quest for the purpose of life, or light in this case. A very fitting title, but the word ronin does not have the same ring in Japanese. The word ronin means a student who failed to get accepted to a university of his or her choice and is seeking another chance. Or from a more historical point of view, a masterless samurai!

The final naming came from an American Tokyo member, Rachel Nakyama, who suggested “Light Up Ninja” for their deftness and indefectibility, also a word that most people around the world can relate to.

For Singapore’s first Design Festival the Lighting Detectives were invited to participate with an even of their own. There was a lot of discussion about event ideas and location. Possible Light Up Ninja venues included the famous Colonial or Raffles Hotel, the Merlion Monument, one of the top three most disappointing monuments in the world, or the graveyard of containers and cranes in the world’s largest port of trade. These all seemed like interesting possibilities, but after reassessing the purpose of the Light Up Ninjas a more ordinary cityscape, something overlooked in the busyness of everyday life was chosen. We also wanted anyone to be able to join this workshop-style event.

The hub of Singapore Lighting Detectives actives for this event is a quaint little district of renovated shop houses built in the early 1900`s in China Town. Built to the human scale, streets are lined with low-rise buildings, decorated facades, and a charming atmosphere. Mixed in with the local markets, shops, cafes, and restaurants are many architectural and designer offices, creating a unique community. We chose the cozy, little Duxtun Plain Park in the middle of this unique community as the target of our next light up event. 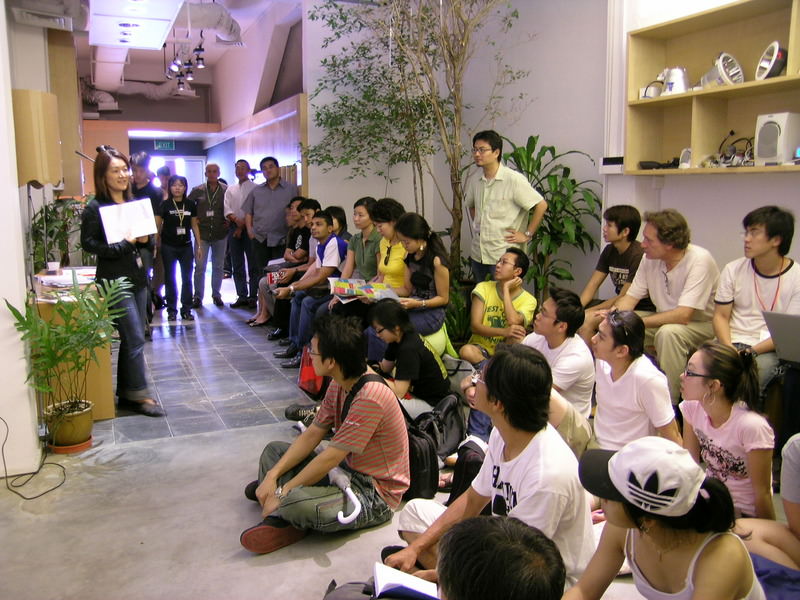 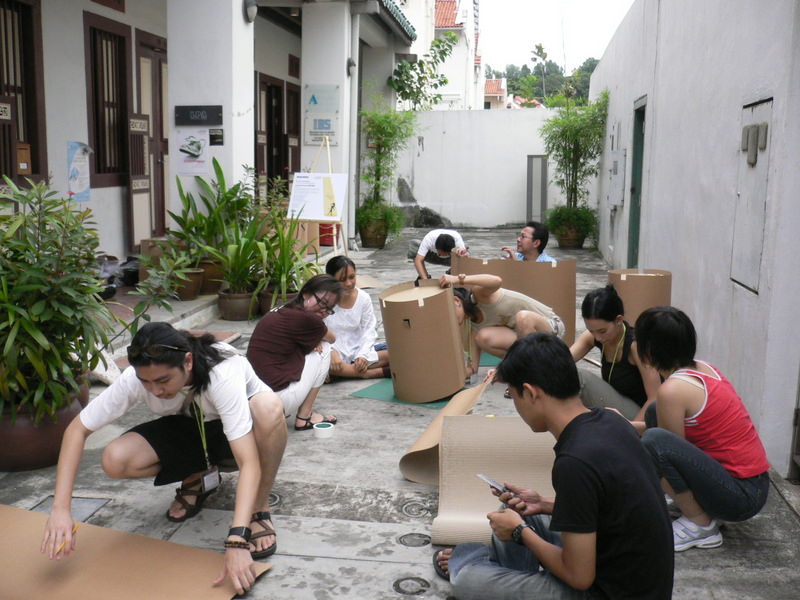 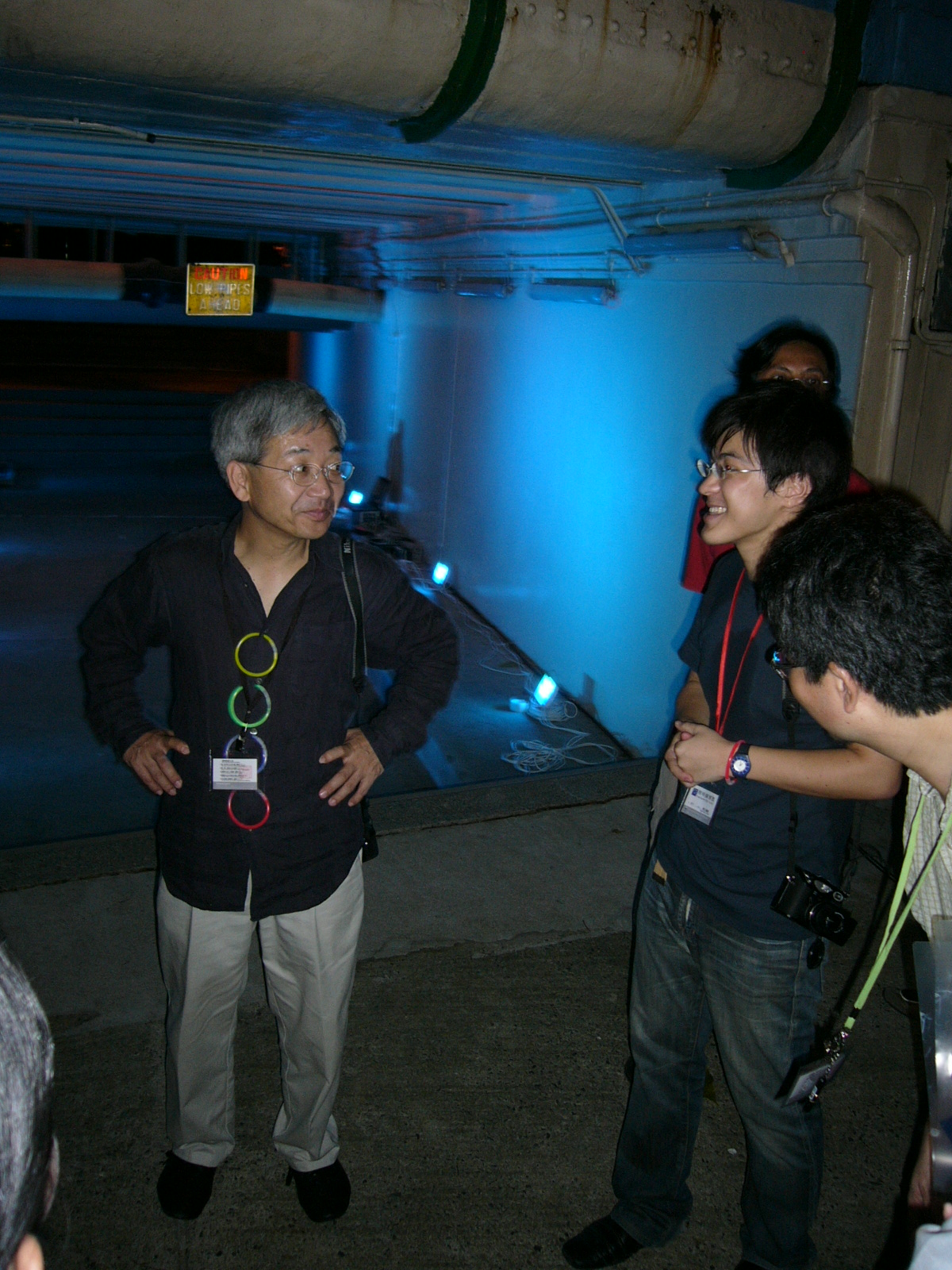 Mende & others perparing for event. 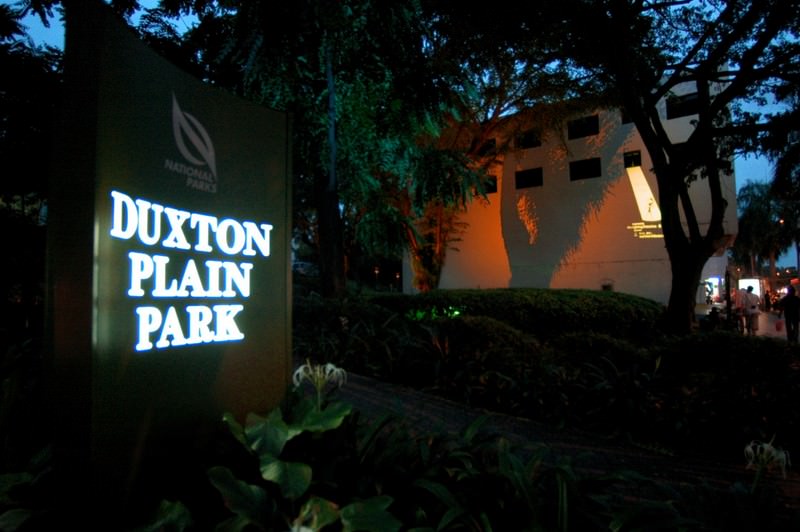 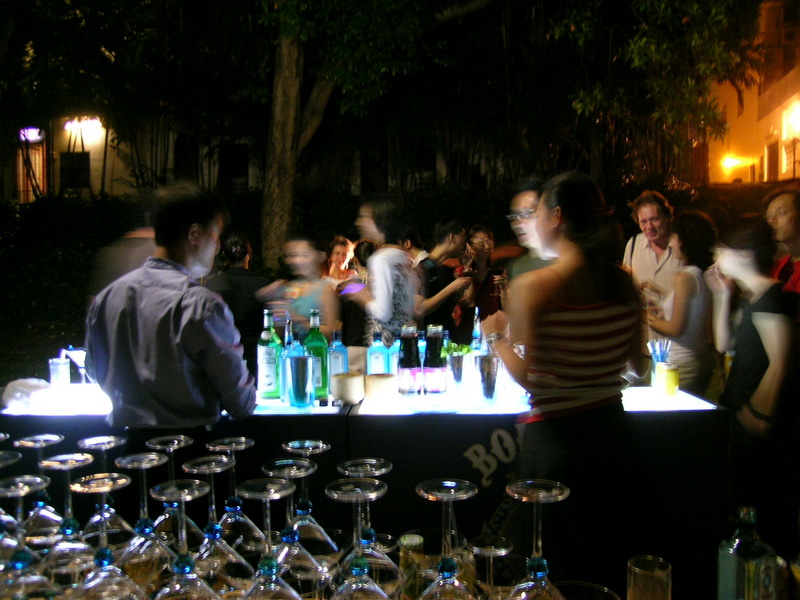 This was the first time for Singapore members, Atsushi Itakura, Takeo Sugamata, Yah Li, and Gaurav Jain to participate in a Light Up Ninja Event and we were all anxious for the two-day workshop, November 19 & 20, to start. To get ready for the event, we scrambled to selecte four park locations for illumination and to contacted lighting fixture manufactures for donations. Since the event would be held in a public venue we petitioned the Singapore Parks System for permission before hand so we would only have to deal with unpredictable weather issues the day of the event. Until the day before the event a downpour pounding the window panes kept us worried.

A cloudy, but not rainy sky greeted us on the day of the event.

Day one. Twenty-five participants included mostly young design and architecture professionals, but also a 14 year old jr. high student, an investor, and journalist registered for the event. Kaoru Mende, leader of the Lighting Detectives also flew in from Tokyo for the event.

All participants met at the Lighting Detective Headquarters for an introduction to the workshop, guidance, and introduction of sponsoring lighting manufactures. After opening events, all participants drew numbers and divided into four teams. Most participants were only familiar with residential light fixtures, so team leaders and sponsors started by explaining and answering questions about the different types of fixtures and capabilities.

Gaurav Jain`s team was positioned at the entrance to the park, along a main street. They used Martain Professional projection equipment to project the Light Up Ninja logo onto a building facade and also illuminated the trees around the entrance. Atsushi Itakura`s Team chose a long and narrow promenade from the park entrance and turned into an “outdoor lounge.” They used light fixtures with a frosted finish to create a lounge atmosphere among the benches and blooming Frangipani trees. Going further into the park, Takeo Sugamato`s Team tackled a four meter long tunnel. With support from Color Kinetics, Sugamata`s team transformed the dark tunnel into a colorful and exciting space. At the other end of the park, Yah Li`s Team used Erco fixtures to illuminate the small grove of Banyan Trees clustered around the entrance.

The first night was a much needed rehearsal for the main light up event the next evening. Bright streetlights in the park made it hard to see the actual intent of each team’s design. We decided to fashion cardboard shaded to cover the glare during the main light up. Electricians also made sure everything was in order and would work as designed, but as this was the first time for everyone, it was a long Saturday night of preparations.

Day two. Participants gathered again at three in the afternoon to make the shades and any last-minute preparations. Everyone was excited and full of ideas and suggestions as the park was being transformed for tonight’s light up event. The fixtures were all on standby, shades in place, and candles lit as the 7 o’clock lighting ceremony neared.

At the park entrance Lighting Detective Leader, Kaoru Mende, started the countdown and projection of the Light Up Ninja logo to start off the night’s event. People were coming and going from the park, all wondering what the gather and fuss was about. Team members explain their design concepts to attentive listeners, guiding them through the park to the other illuminations. Famous for their blue bottled gin, Bombay Sapphire donated a martini bar for this one-night event and the entire park was transformed into a lounge. Cheers to the long, hard work and passionate Light Up Ninja participants!

This time each year I rely heavily on the Rain Gods not to forsake me. June 22nd, including summer and winter, I count this as the 7th time we have held the Candle Night Event and today’s weather forecast was rain. If it is just a sprinkle …

Miyamae：In the past year telework has really taken off, which has really changed how we live and work.  Today I`d like to talk about living and working in this new era with Covid 19. Mende：Yes, I`d like to hear your thoughts, also. Miyamae：…

26 February The second “Enjoy Green Lighting” Salon tackled the topic of office lighting, as the Lighting Detectives tried to answer the tough question; What is comfortable, but enjoyable eco office lighting? Research on actual office light…