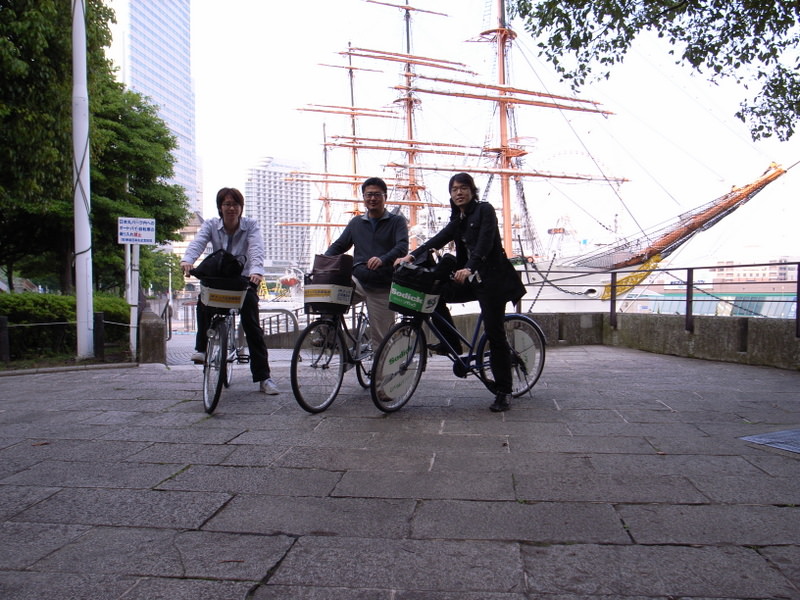 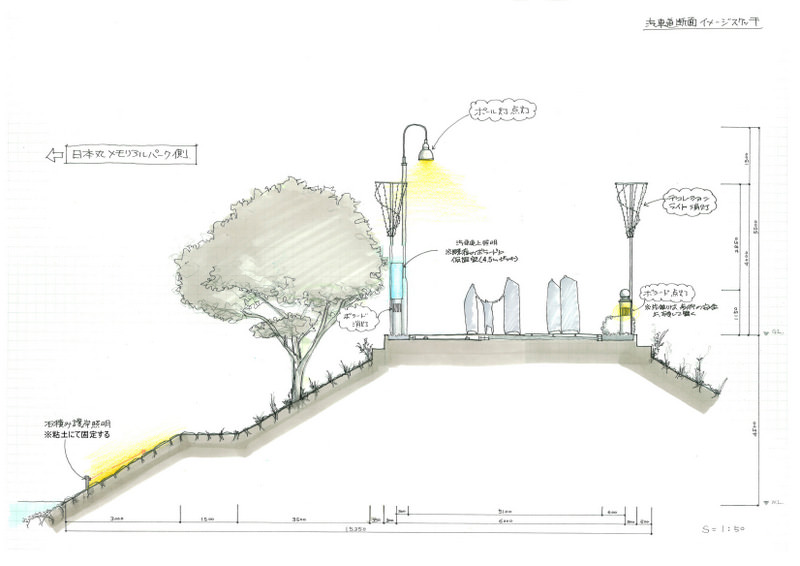 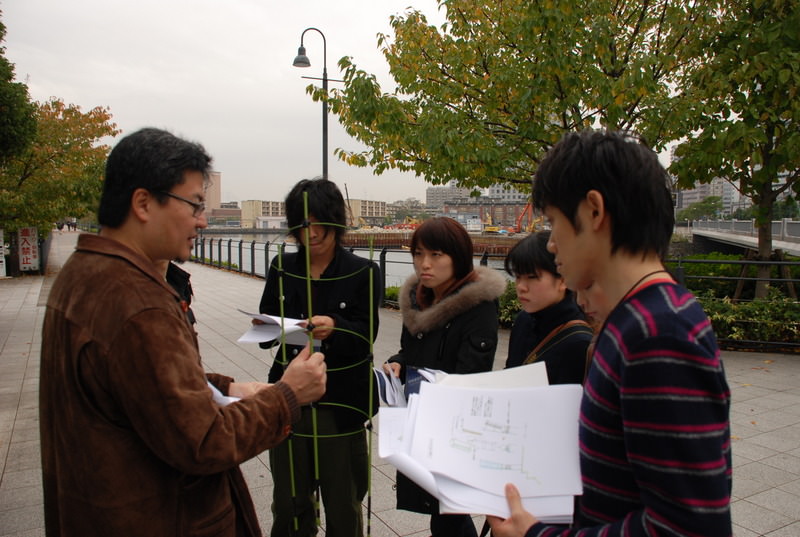 Voluteers and staff hard at work on the day of the event. 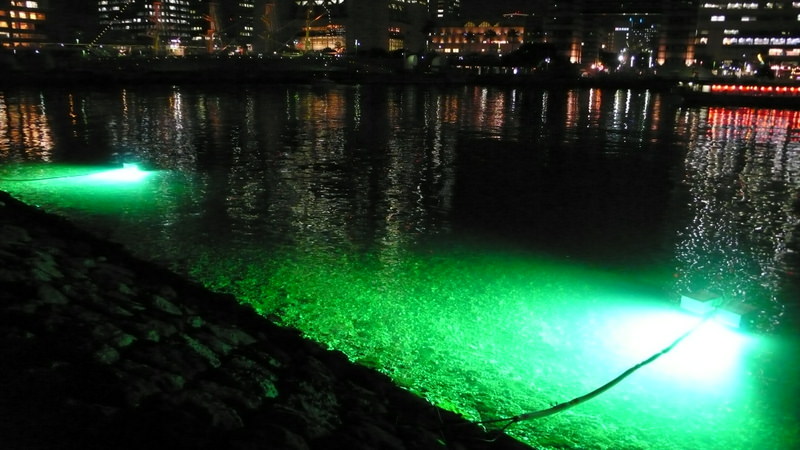 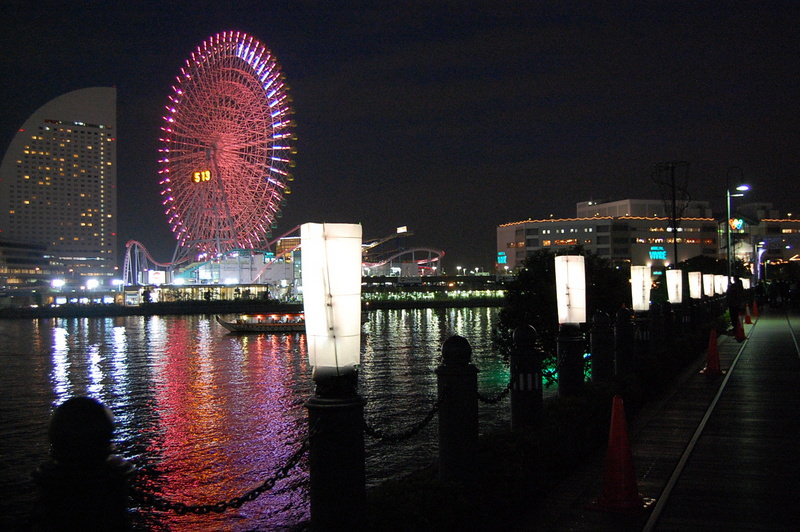 Lanterns placed over existing bollards along the promenade were a little too delicate for the surrounding lighting environment. 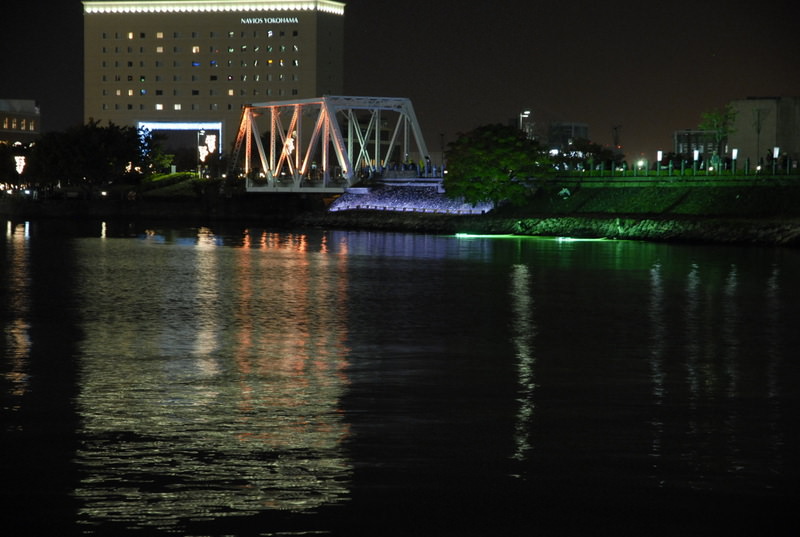 Three different features of the Light Up Ninja experiment. 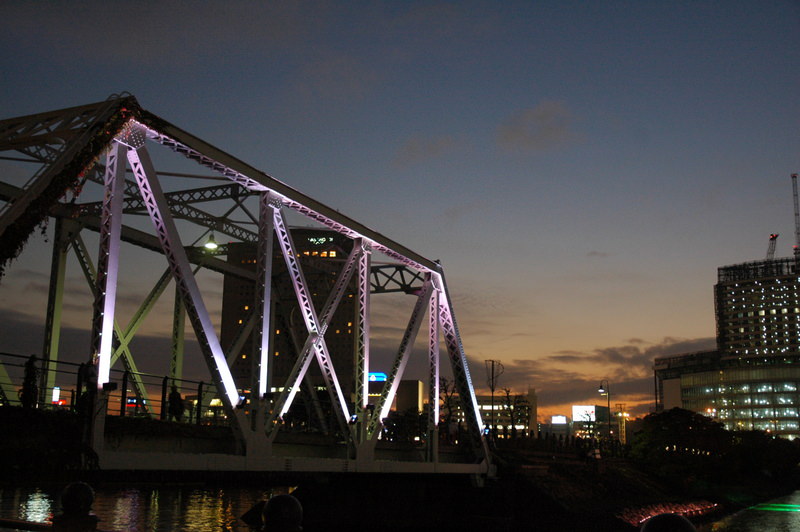 LED luminaries fit inside the bridge trusses illuminate the metal framework. Using different colored lighting, the bridge structure has been turned into a work of art. 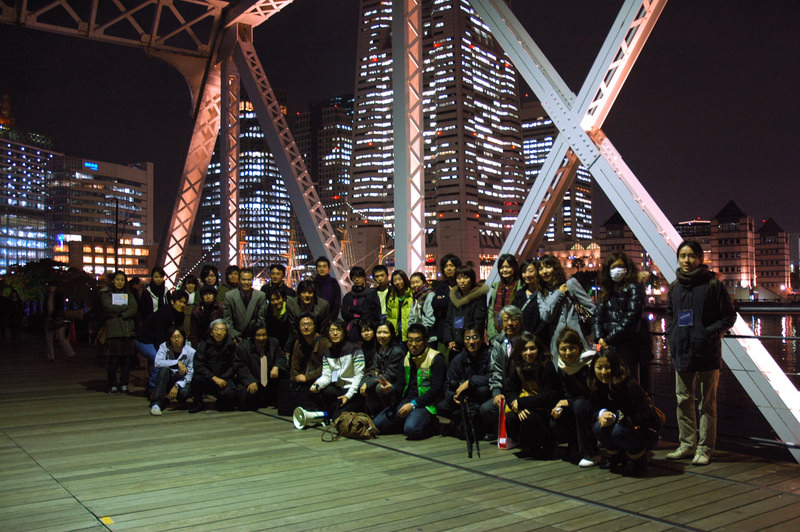 Yokohama is a city blessed with a rich waterfront. The interwoven contrast of water and urbanscape creates a unique charm that attracts many visitors. However, Yokohama at night is in complete contrast with the dark waters creating a barrier in the lightscape. In cooperation with the City of Yokohama Department of Urban Design, Light Up Ninja focused on the relationship of water-people-light to create appeal in the Yokohama waterfront.

The three-man team of Yamamoto, Yano, and I, Itakura, were in charge of this Light Up Ninja project and we decided to move our feet, early, with some initial fieldwork in May. We had no idea what kind of undiscovered charm could be found in the city, but rented bicycles to cover as much area as possible. (and paid for it the next day!!)

The journey took us under the elevated highways, to old Yokohama Foreign Generals Cemetery, Honmokufutou, a large container terminal near the bay, and other popular sightseeing spots. We sketched, took photos, and surveyed the areas for possible Light Up Ninja sites. Lastly, we laid eyes on the Kishamichi Promenade. At night it was just a dark horizontal line across the bay, and maybe a chance for the Light Up Ninjas to work a little lighting magic. We further surveyed the area several times, taking measurements and working hard to uncover the hidden charm of this promenade.

At first we had many grand ideas, but had to remember that this was just a one-night impromptu experiment with limits and city policies to work around, which turned out to be an even tougher challenge to navigate than the grandiose ideas. But, after much thought and discussion, a realistic direction and plan started to form.

From the start we wanted to experiment with underwater lighting. With the help of one of our very reliable lighting manufacture connections we were able to borrow a fishing light to highlight the edge of the bay from underwater.

All hands on deck!

Our hopes were raised the day of the event with clear, blue skies. While staff and the many volunteers gathered in the morning and worked hard all day to prepare the area, I heard myself saying “the most important thing to remember toady is to have fun!”

As evening approached, the underwater lighting was switched on and as the brightness slowly increased so did our excitement. We fitted the 2kw metal halide lamp with a reflector and aimed it toward the bank. Maybe the bank was closer then we realized, but, no doubt about it, the light was very powerful! This area is usually very dark t, but tonight it was alive with light riding on the gentle waves of the bay and lapping against the shore.

Liner LEDs lined the historic stone path and paper lanterns were made to cover the original bollards along the promenade. The lights were programmed to change color and we also experimented with various movements. All were viewed and critiqued from the opposite bank.

Steel trusses transformed into a work of art

My personal favorite was the illumination of the steel frame truss bridge. The bridge was transformed into a piece of artwork with the structure carefully lit and highlighted against the darkness of the night.

We spent several weeks in preparation for this one night Light Up Ninja event, but we were able to test and confirm with our own eyes many lighting effects.

We especially appreciate the work by volunteers who helped with set up, Mr. Hoya, who connected the electric wiring system, support from many lighting manufactures, and most importantly, approval from the City of Yokohama Department of Urban Planning for use of the area. We thank you all for your part in the success of Light Up Ninja.

Theme: Light art and Lighting design Interviewer: Blanche Lam Blanche：LPA is a lighting design firm. The works mainly focuses on design rather than art. What do you think about design and art? Mende： Good question! But I’d like to ask you b…

Date: September 22nd, 2005 Program: City Tour, Symposium Venue: AIA Center for Architecture It was another beautiful autumn day in New York City for the 4th Annual Transnational Tanteidan Forum. It all started 4 years again in 2001 with the…

I have to apologize for my absence, I just realized that I haven’t written a single note yet this year! I don’t know if I’m just lazy or too busy and time just flies, but three months of this year are already gone! My assistant is always sa…