Following a successful run of last year light up Ninja Event, this year was held in conjunction with National heritage board as part of the Singapore Night Festival .

This year theme was to encourage participants to “Come play with Light and Shadow” with some inspiration from the summer festivals of Japan. It is held at local art school, School of the Arts (SOTA) which is also in the bustling art district of Bras Basah at the town area. 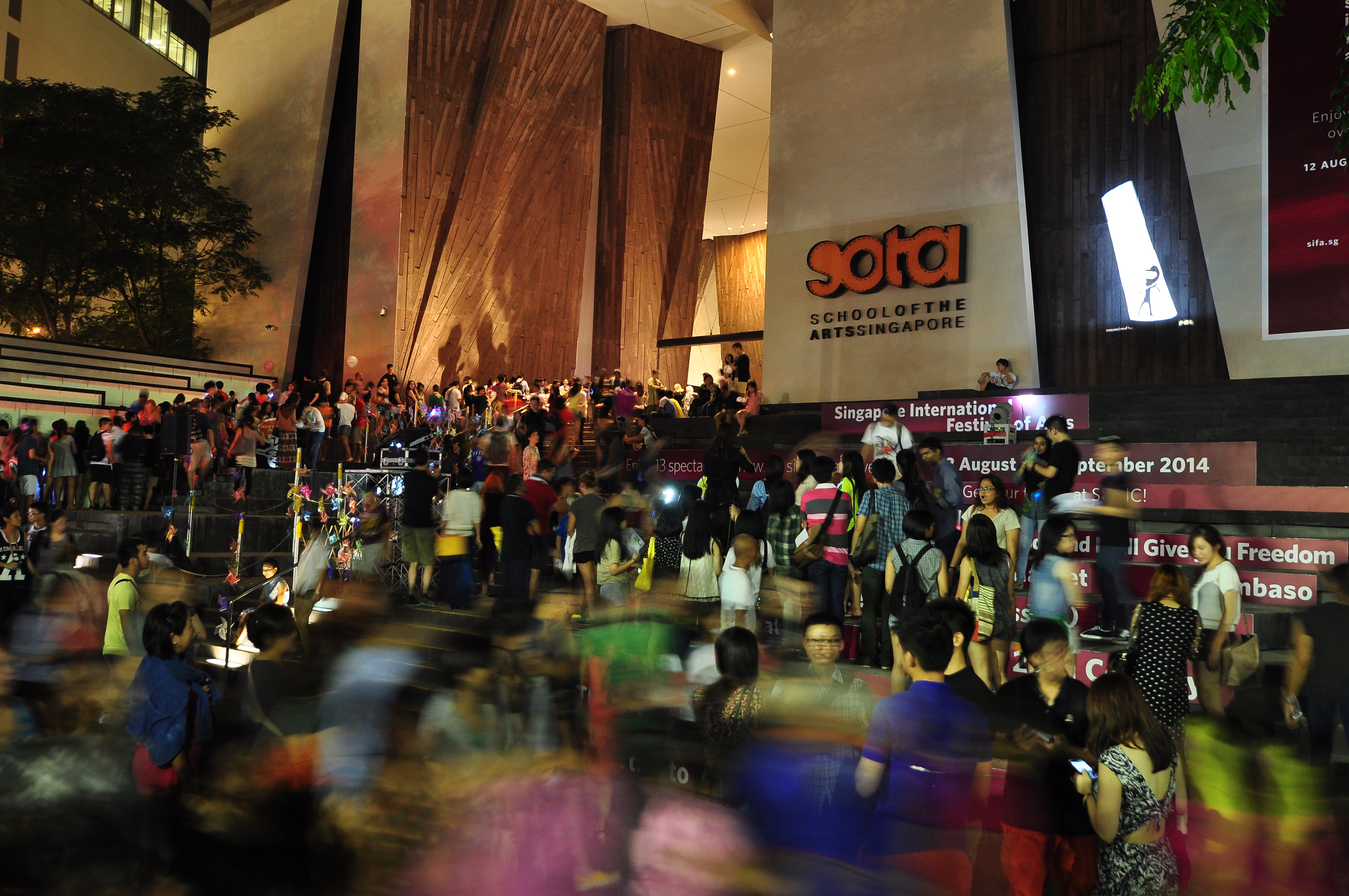 The day of the event Many people visited the venue, School of the Arts Singapore 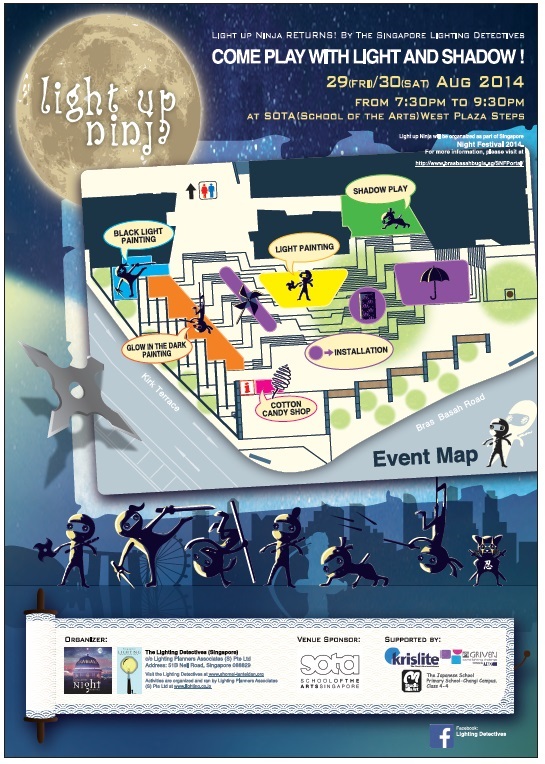 The day of the event

Over 40 members of lighting detectives and volunteers gathered at the location at 3pm on the first day, to have a run through of the flow of events over the next 2 days. After which we split into our respective to begin preparation work, expecting the event to start at 7.30pm. Even before the time, there are many passerby curious to what is the event about, and we have started to engage them. The turnout was better than expected as there was a period of heavy rain during the first day of the event, still the mood was not dampened after the rain. As there are many people queuing at the different installations that we have prepared when the rain had stopped, it is very encouraging for the detectives!

In addition, we designed a lighting discovery adventure route where participants have to complete all installation to receive a gift. The gift is a cotton candy on a luminous LED stick hand‐prepared by the detectives and it is only limited to 1000 pieces. This was surprisingly popular not just with the kids but also the young adults. As people are walking around with the cotton candy, they not only add to a dynamic light scape but at the same time, it also helps to advertise our event!

There are four main installations which allows the participants to explore and discover about playing with lighting by means of a simple interactive installation. 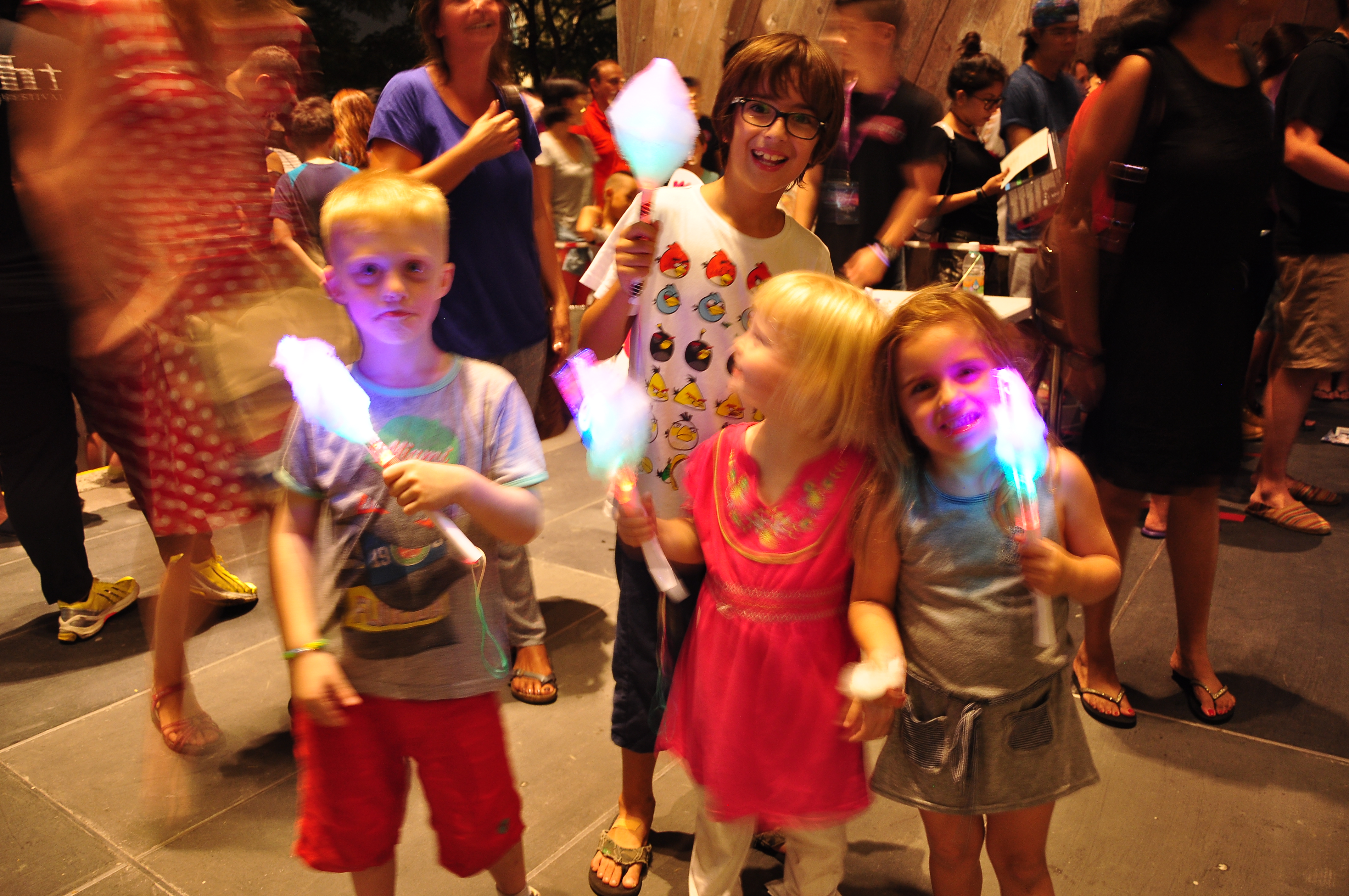 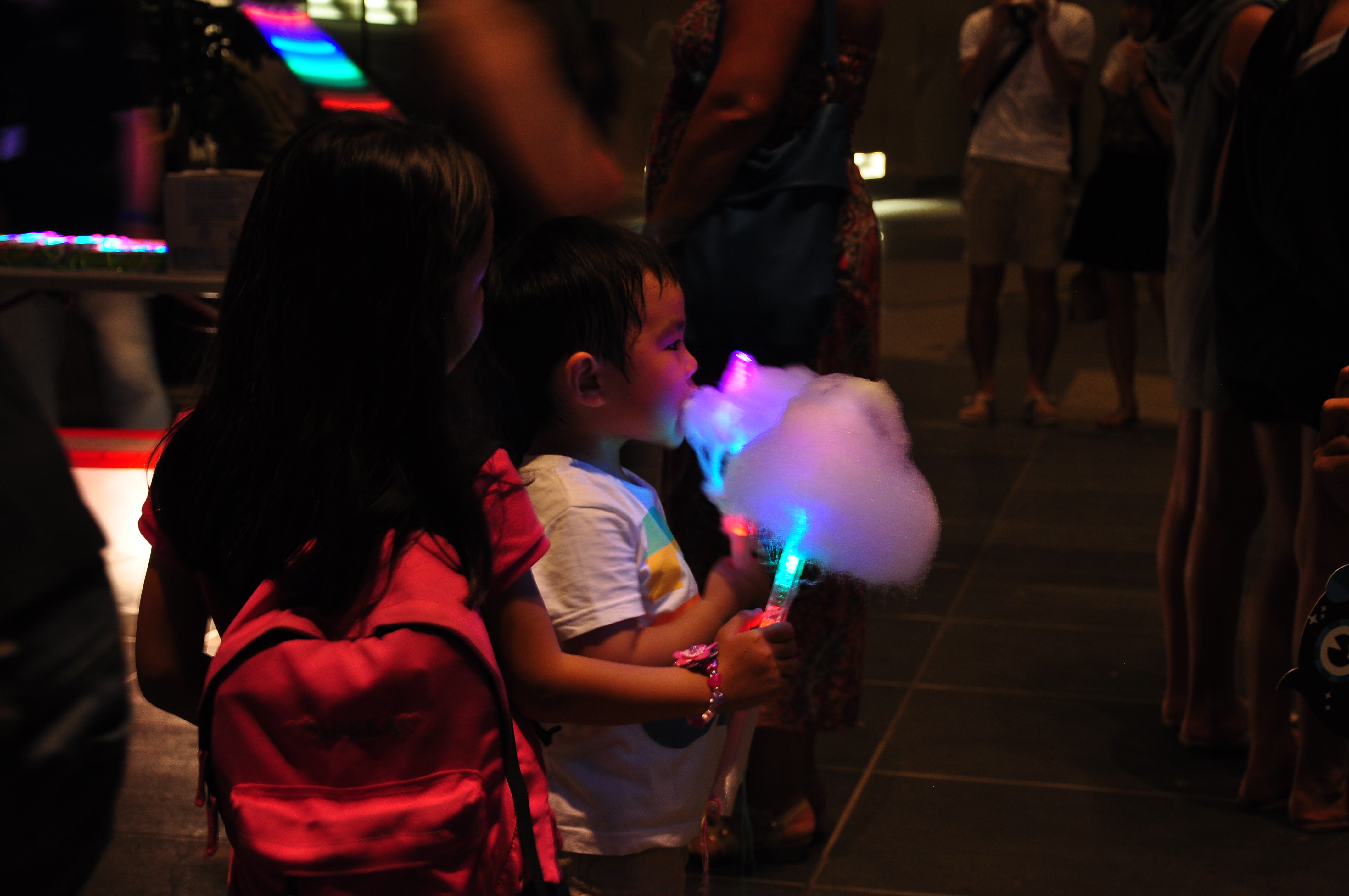 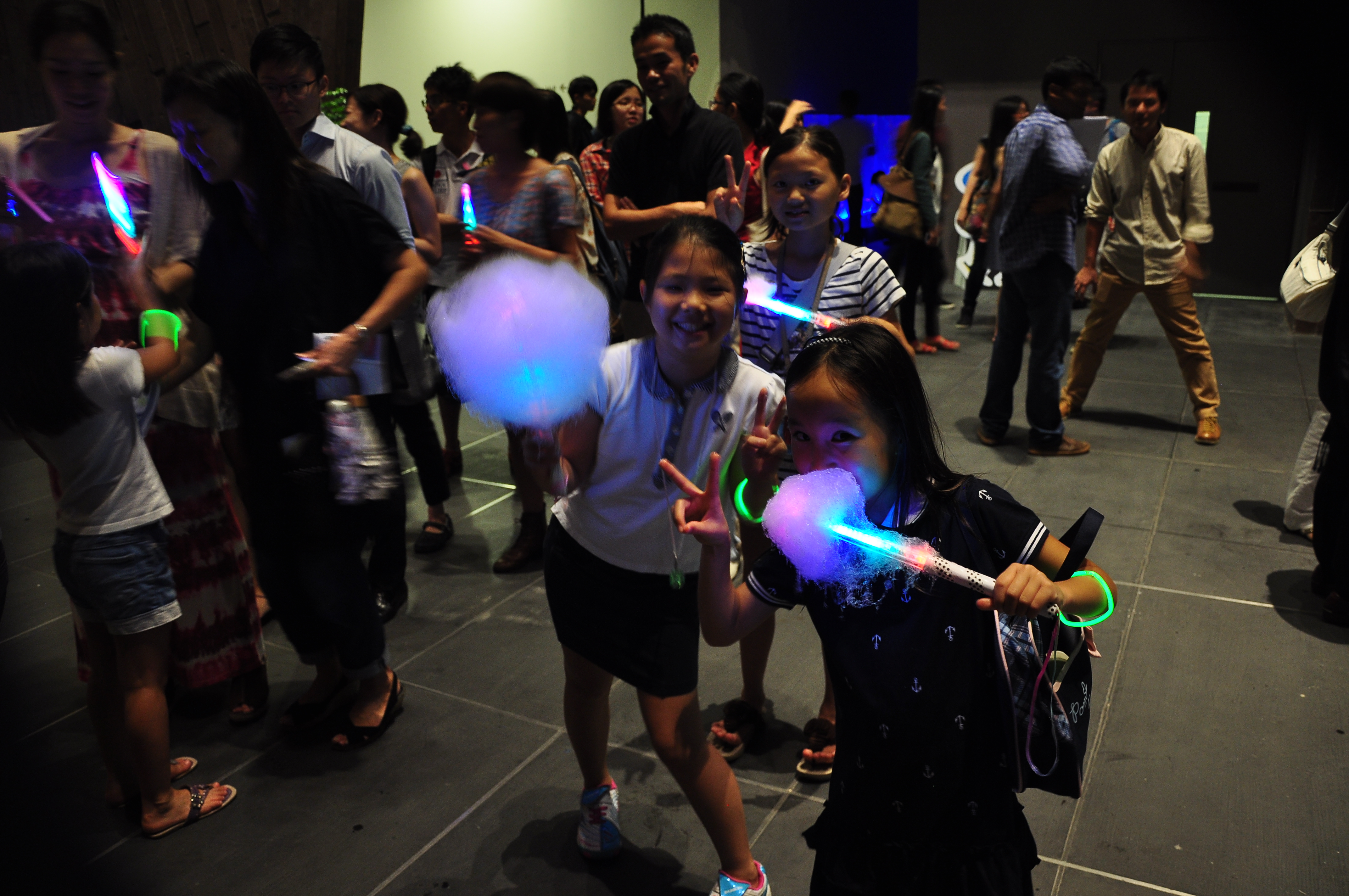 The main feature of this event” Luminous Cotton Candy”
Children were delighted when they got a strange glowing cotton candy. 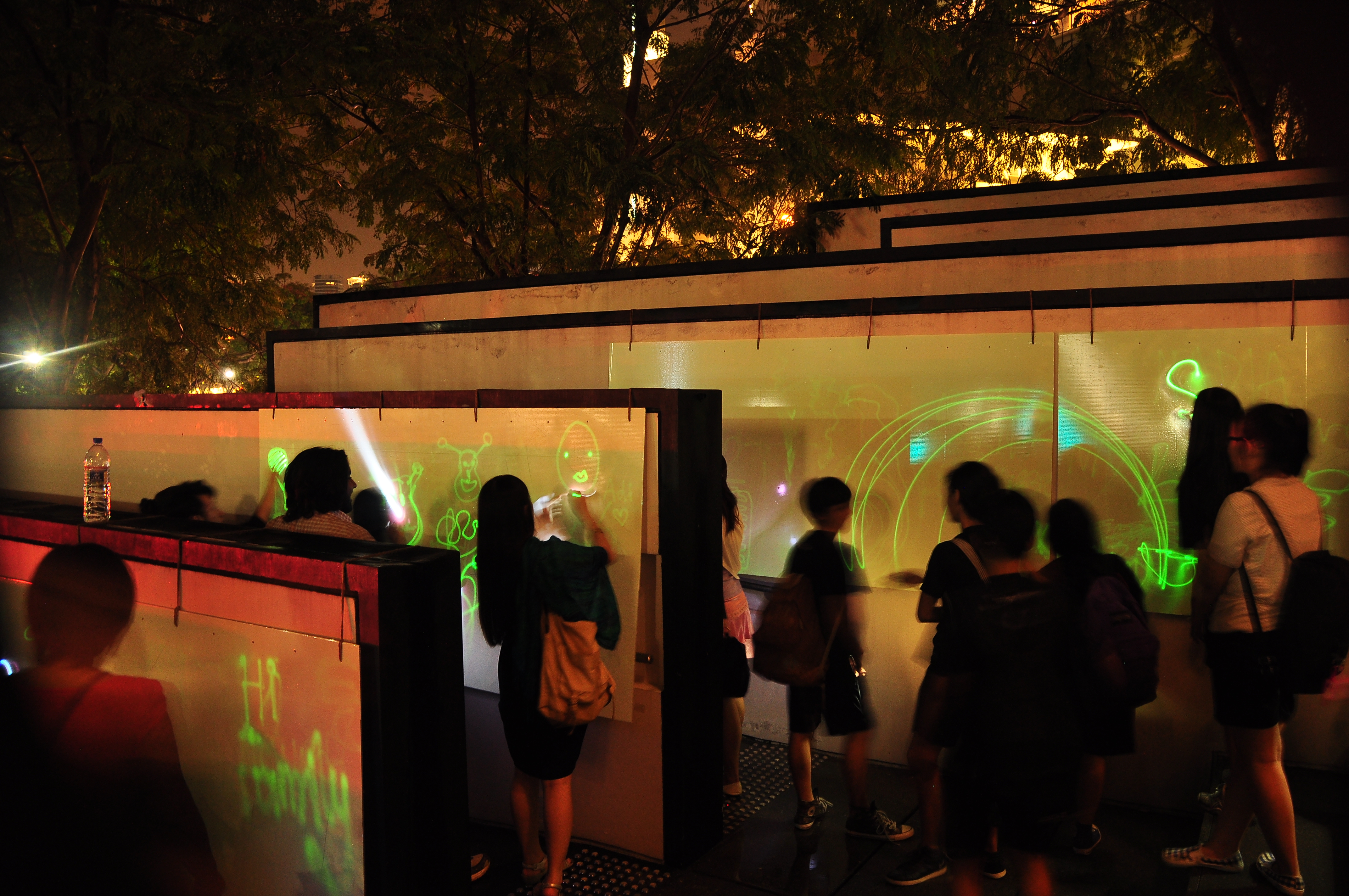 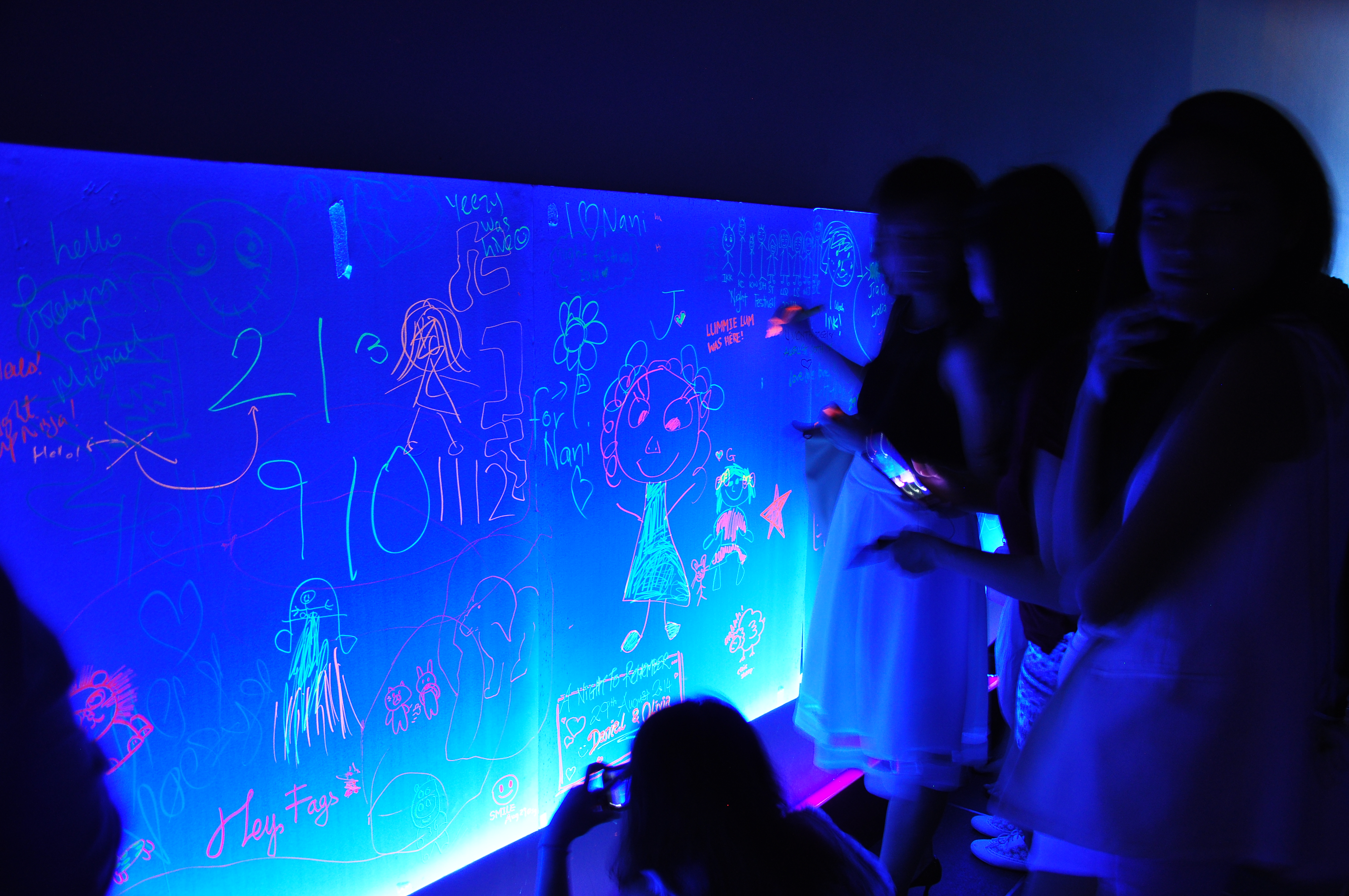 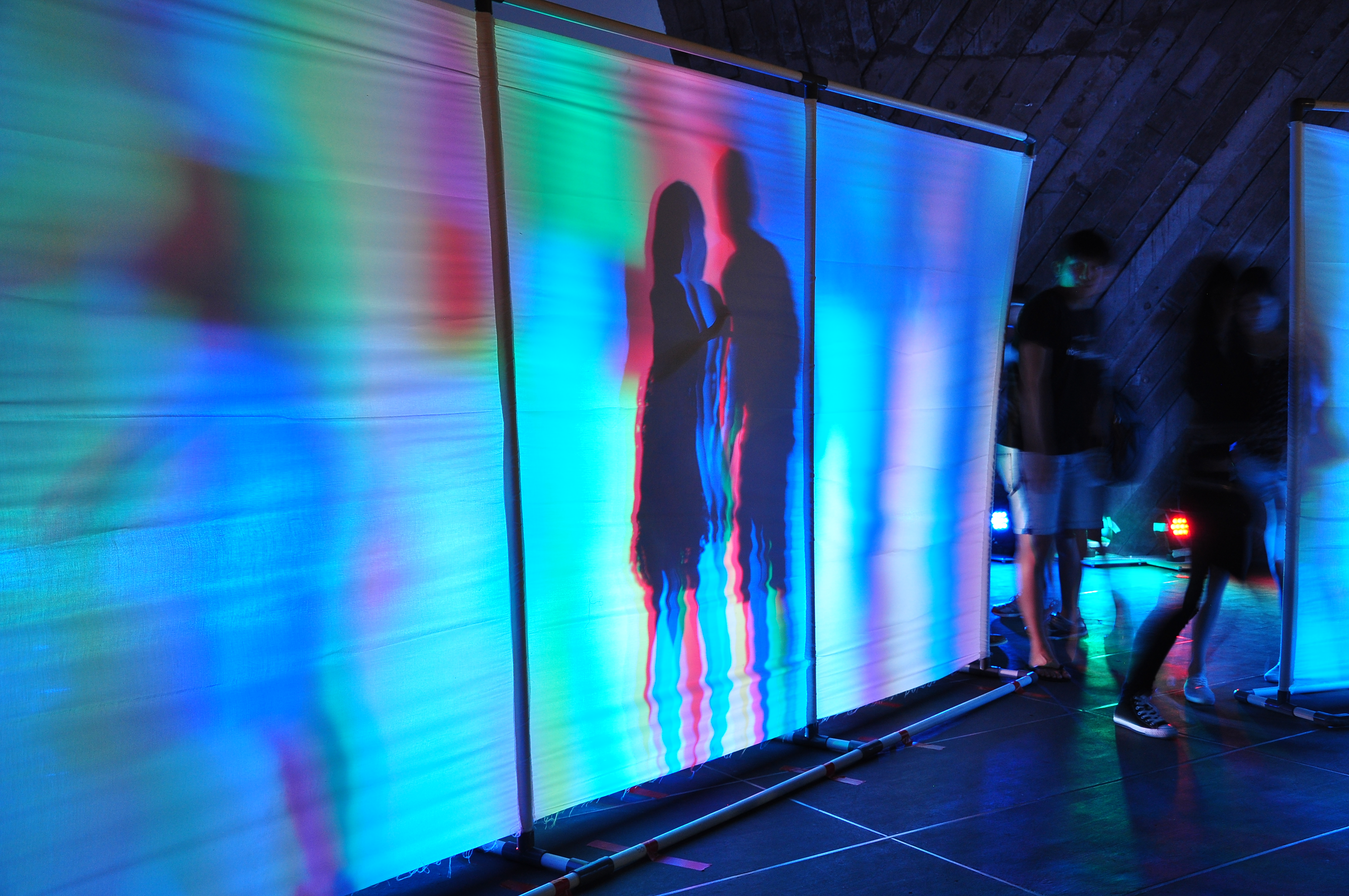 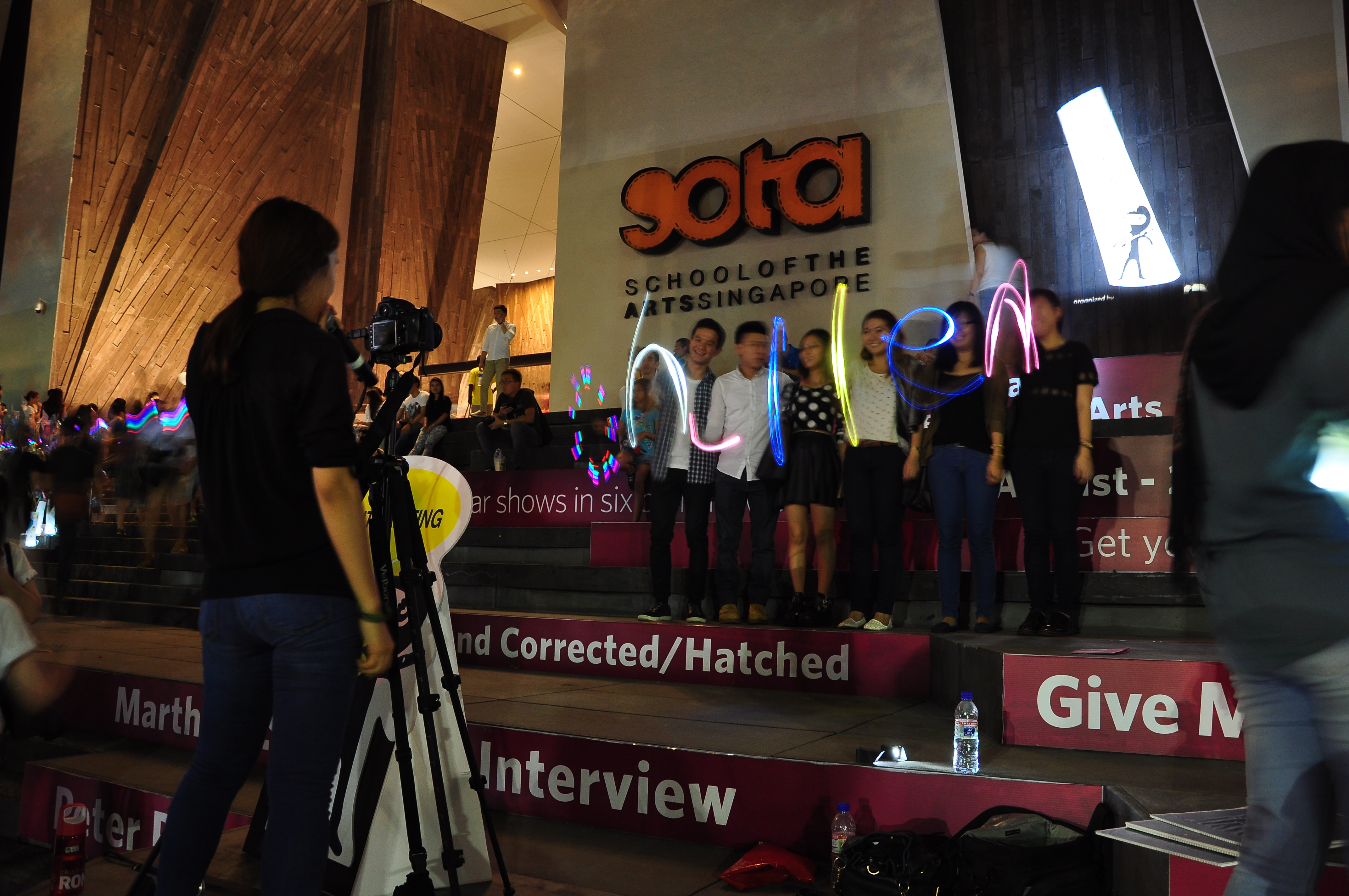 Glow in the Dark Painting

A series of canvas are put up along the walls of a meandering slopes of the long handicap access, which transform the space to a light graffiti space where participants are free to leave their marks using LED torchlights provided by the detectives. The canvas has a layer of Phosphorescent sheet attached records the lights from the torchlights for 15 to 20 seconds. Although there was no clear explanation but participants understand how to play intuitively and inspires each other as they create silhouettes or other interesting shapes on the canvas.
There are even some who to creative enough to use the light from their cellphones.

This was a well kept secret installation of the event happening in a dark and narrow corridor towards the back of our venue. The detectives are worried that this installation might be less visited as it is slightly less accessible and visible than others, but our worries were needless! This was really popular with kids and they spend a lot of time drawing here, there are also many people asking how the installation and black light works.
A row of UV fluorescent tubes are installed along the corridor wall with drawing canvas placed against the wall behind the tubes. Drawing with a normal fluorescent pen or marker, the UV light would react the ink which makes it glow in the darkness. The canvas are filled with many messages and also cute sketches by the participants!

The Shadow Play installation is setup in a prominent location at the top of the grand staircase, visible from the busy pedestrian pathway. This transforms the space immediately to a temporal stage as participants interact with the installation and does an impromptu performance of shadow play. Several pieces of white cloth are stretched across to make a screen, and some RGB spotlights would be shining at it from behind.
The participants create shadows on the screen when they are blocking the lights from the spotlights. This is a popular photo taking location as there are many people taking selfies both in front and behind the screens.

This installation explores on light as a temporal element and using it as a medium to paint through the lens of a camera set to a 10 seconds exposure. During the 10 seconds, participants would be free to express and draw as they wave about their portable LED lights. Many are curious and intrigued as they see their light painting works projected on the wall behind. Some popular results are heart shapes from couples and also circles or round shapes. We have over 100 sets of the photos in total which have been uploaded on the facebook page of Singapore Lighting Detective.

Also, this year, we have collaborated with some schools to prepare for artwork installations. The larger scale installation is “Umbrellas” by the students from SOTA where a series of 4 workshops was held with the student and the teacher by Gaurav, Yusuke and Kai Xiang. Using umbrellas is as part of the theme of summer festival of the light up ninja event. The students explored different concepts and also forms of final aesthetic look. The final form was even tested with a mockup to be weather proof to withstand the rain and wind. In the day, the umbrellas shelter from the sunlight, and one can take shelter while at night, it is dramatically transform with RGB torchlights highlighting the white vinyl surface. A moonlight softly highlight the space which the umbrellas are placed creating a subtle background to the umbrellas. In addition, students of the Japanese elementary school in Singapore and Studio Miu also contributed handcrafted windmills and candle holders which helps to enliven the venue.

Although there are many challenges throughout the preparation and also at the actual days of the light up ninja event, we manage to overcome
everything and the two days event was fun and successful. Even the heavy rain did not dampen our spirits at all. It was a great experience and another victory for the lighting detectives! Look forward to the next event! 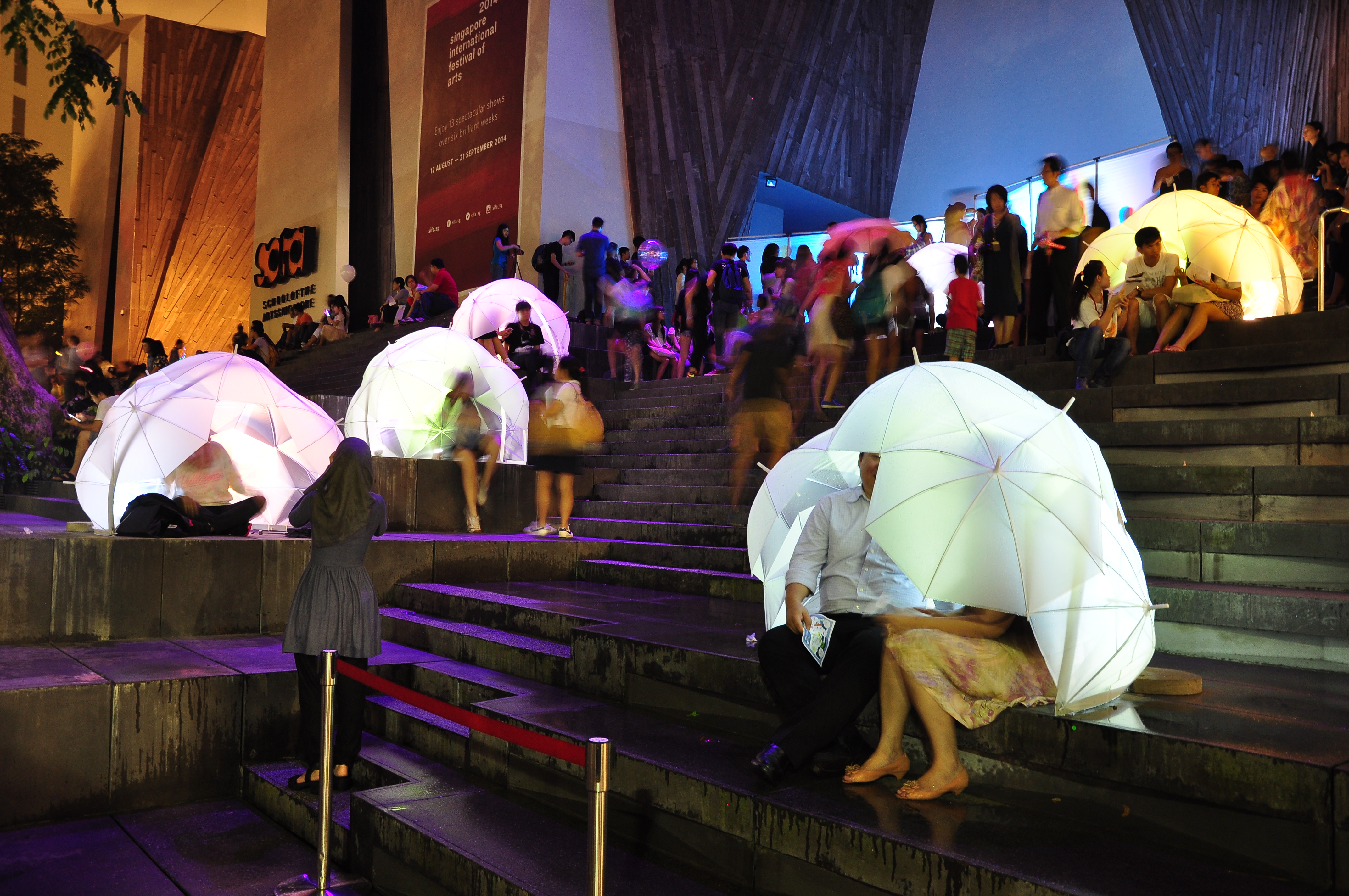 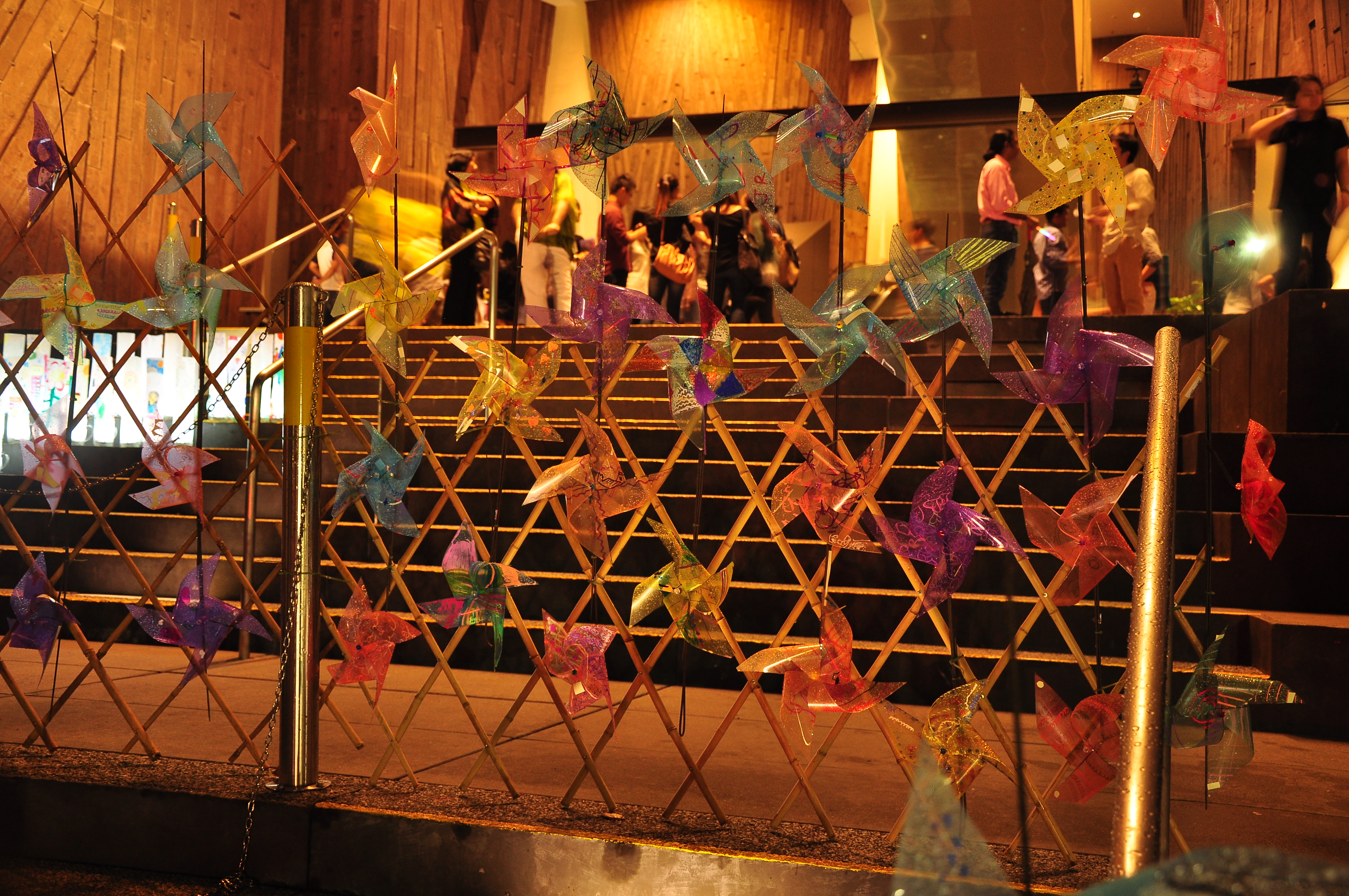 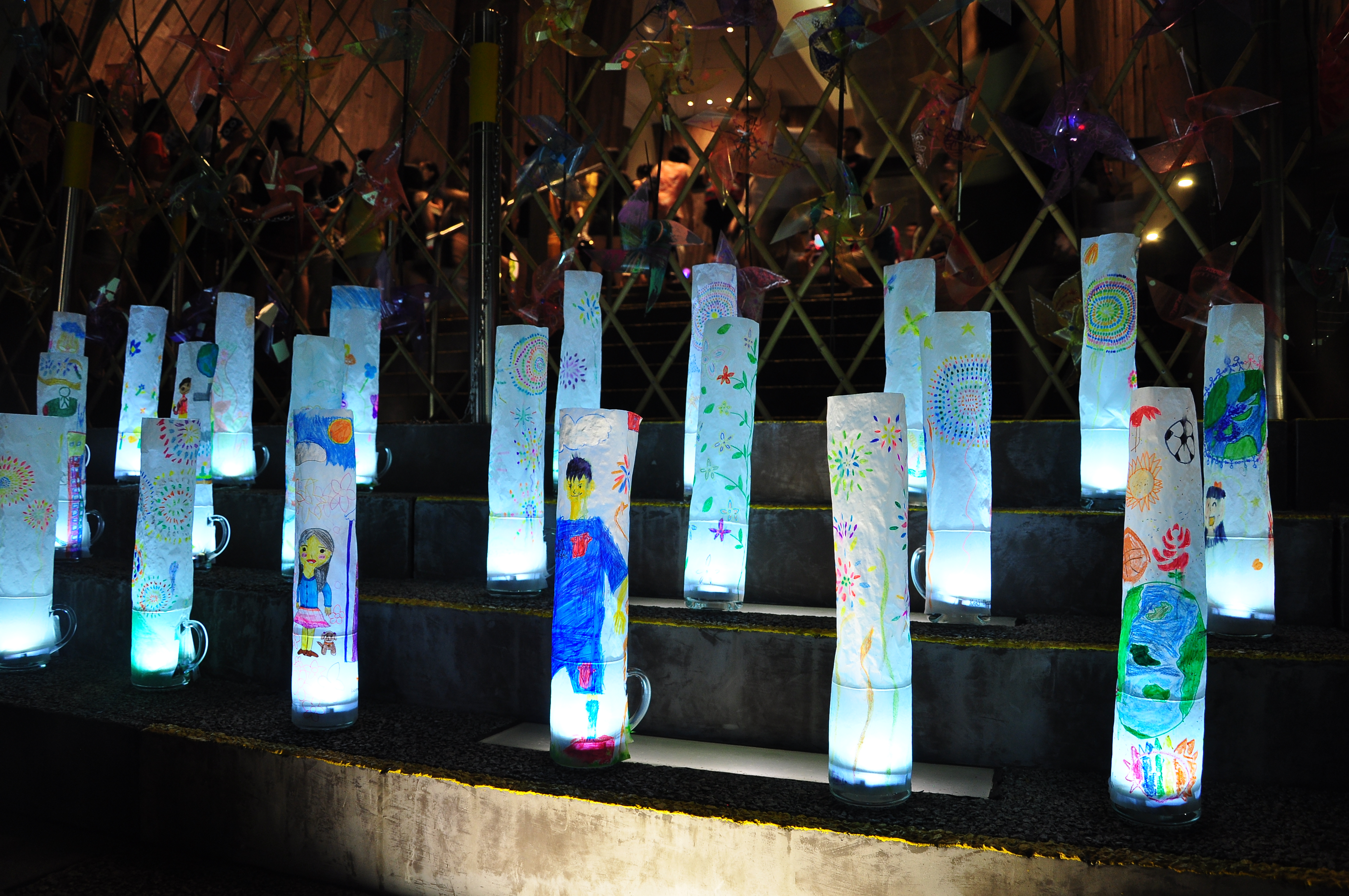 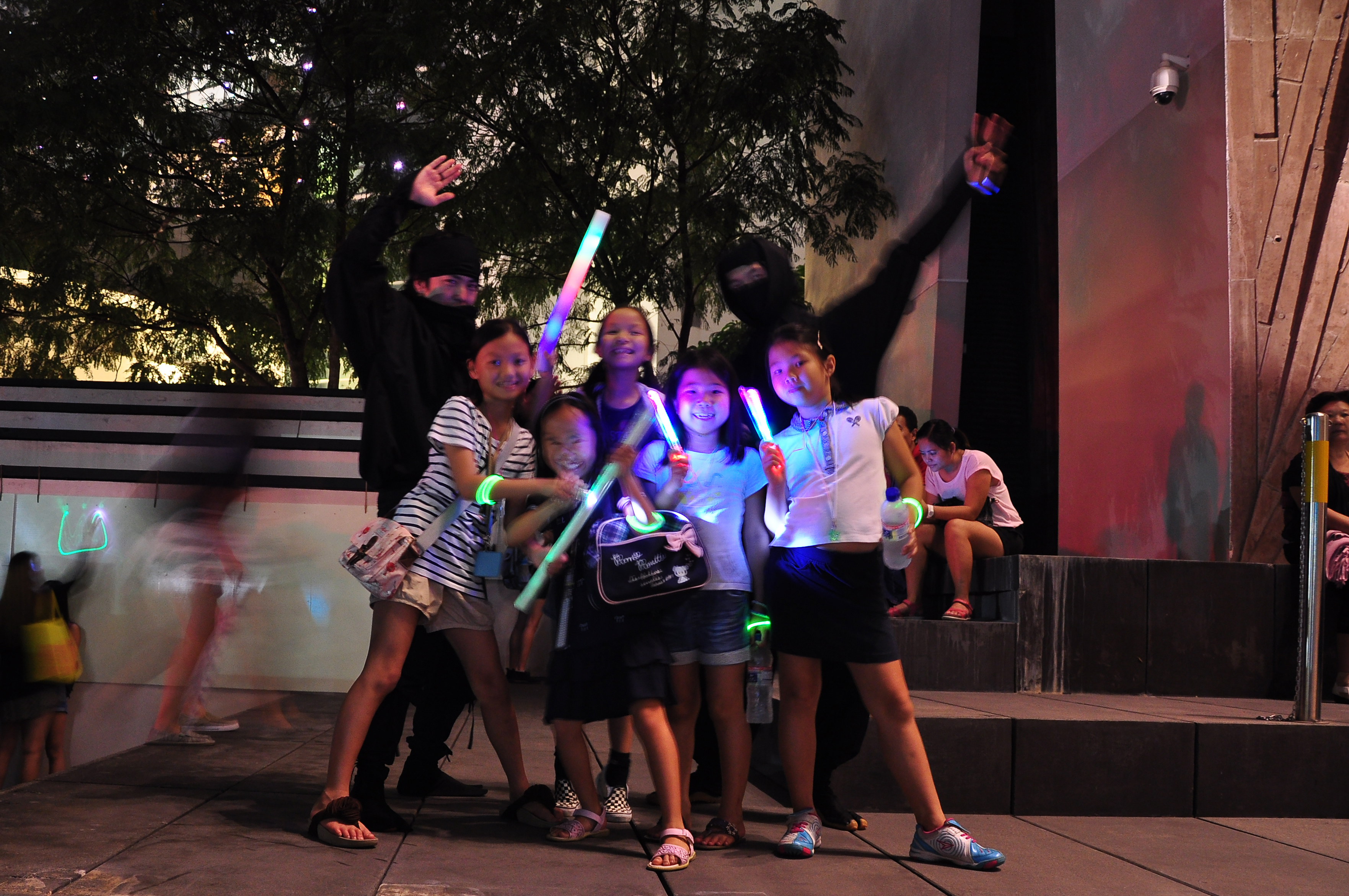 staff with Ninja outfit livened up the event. 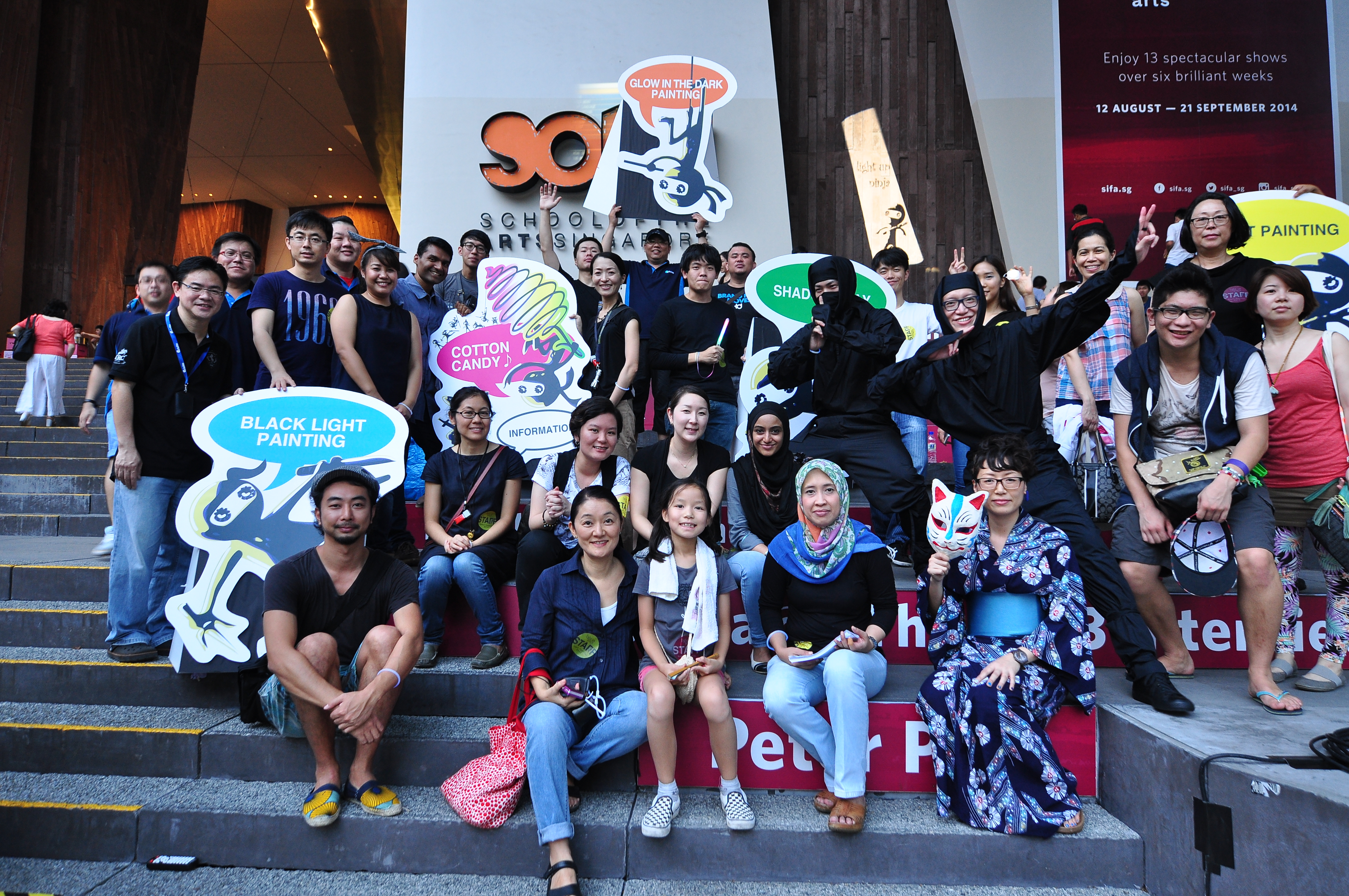 Transnational Lighting Detectives Forum 2019 in Shenzhen “Shenzhen Nightscape 2030” The modern metropolis of Shenzhen, China has shown a striking amount of development and is the focus of attention around the world in the field of design an…

Night Walk @Singapore Botanic Gardens Landscape and Parks 2018/10/11 Mayumi Banno＋Sunyoung Hwang ri Goh Two walks in the month of October with professionals from the landscape and lighting industry. One in the real nature and the other in t…

Rustic scenery and relaxing daily life co-exist on Jejudo Island, where we stopped for a luxurious stay at a resort hotel. White light from fishing boats dot the horizon and clarify the boundary between the dark night sky and black ocean wa…