Roppongi has many faces including, an entertainment district with a foreign twist, new offices for daily business, and is developing as a center for the Tokyo art scene. The Lighting Detectives sped around on their bikes in April to discover what kind of light exists in this multi-functional area. 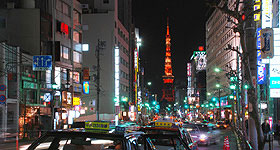 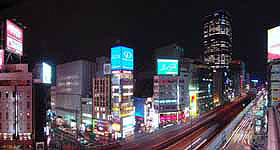 Points of reference include Mori Tower, Midtown Tower, Tokyo Tower and the metropolitan expressway, that cuts through, dividing this area of Tokyo. Large-scale luminous signage and a collage of other miscellaneous lighting dominate the view. 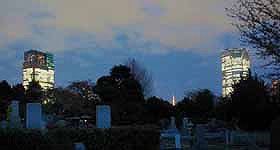 Looking toward Roppongi from Aoyama Cemetery. The 3 towers that stand pronounced over Roppongi are a product of power and force, but appear alien in this setting. The towers look close and, yet, far off, as this scene can play tricks on your eyes.