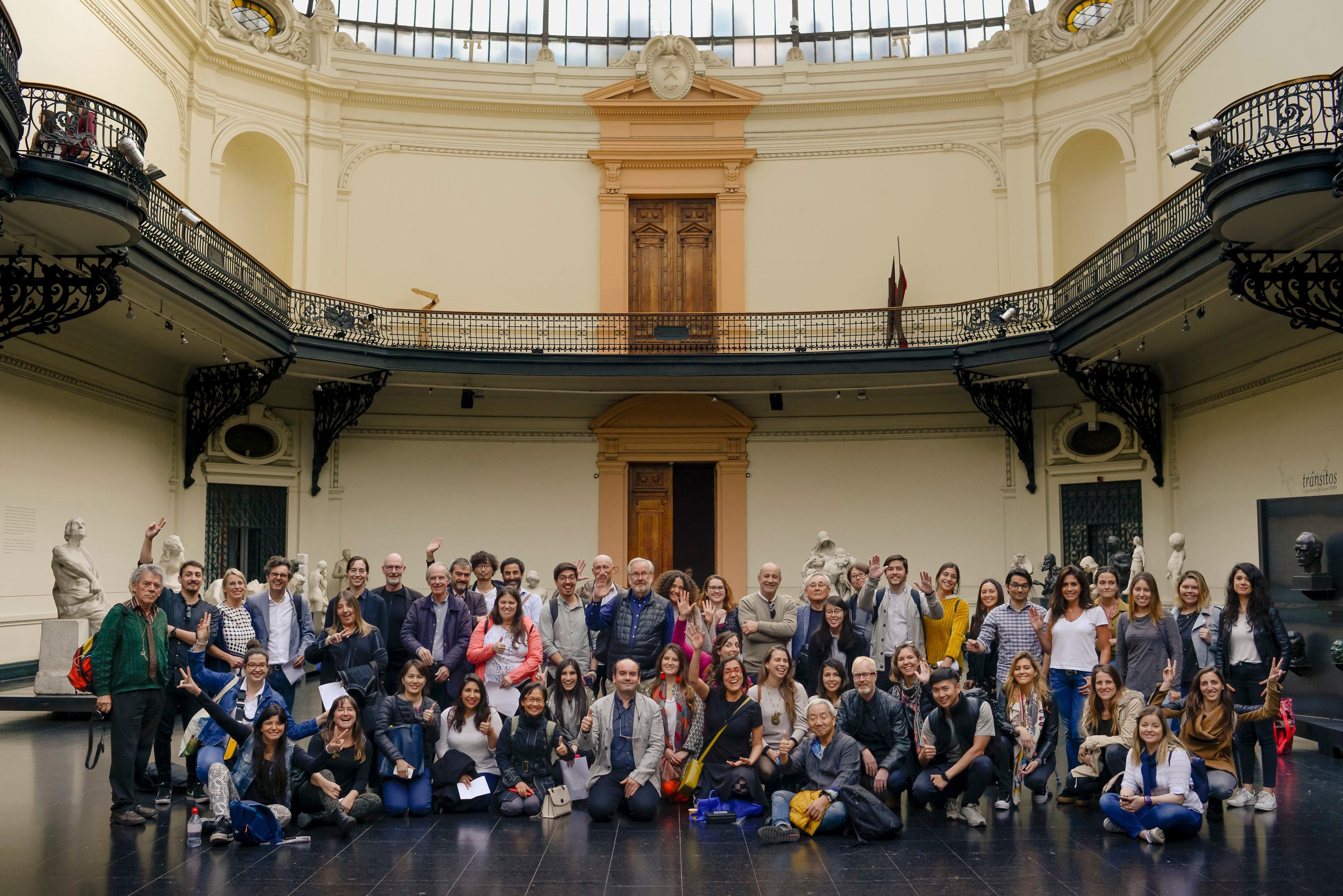 Taken at the venue for talk event, National Museum of Fine Arts, Santiago

The 14th Annual Transnational Lighting Detective Forum was a 2-day event held on October 18th and 19th in Santiago, Chile. As the first forum to be held in South America, the event was well attended by the general public, with professional lighting designers and architects, instead of the usual student population, making up the central body. The forum kicked off with a relay-style talk session by the core members, focusing on the forum theme, “Hero and Villains of Light in your City,” at the Chile National Museum of Fine Arts. The forum wrapped up with proposals to improve the lighting environment of Santiago at the University of Chile.

Core members kicked off with a talk session focused on the forum theme, “Hero and Villains of Light in your City,” reporting on the state of New York City, Beijing, Hamburg, Stockholm, Belgrade, Singapore, and Bangkok. Each presenter had only seven minutes to describe the challenges and successes facing each city. 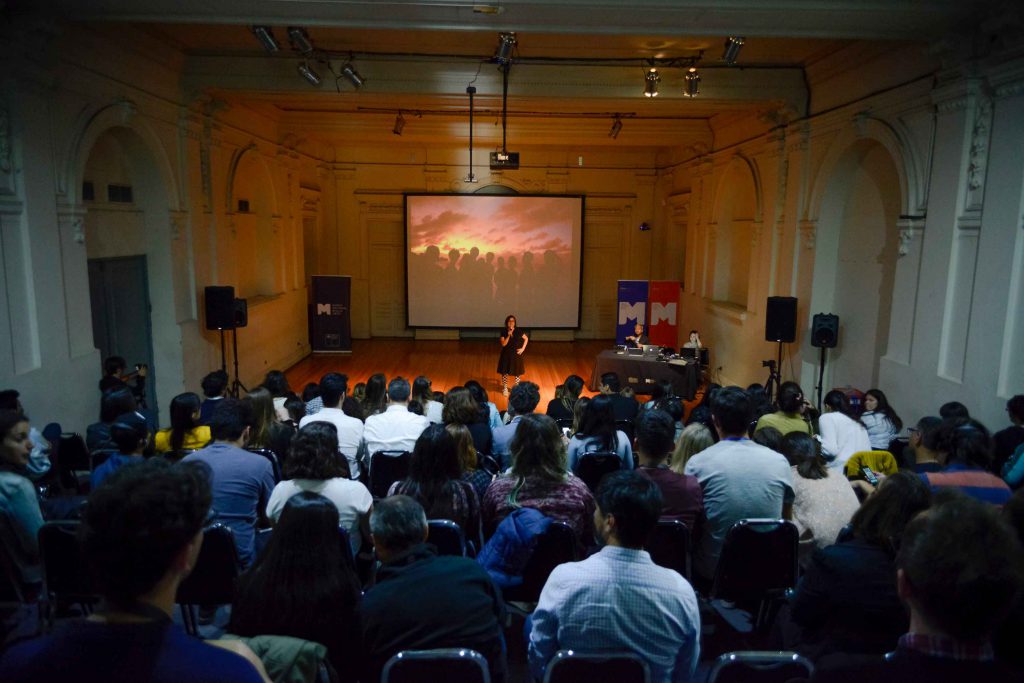 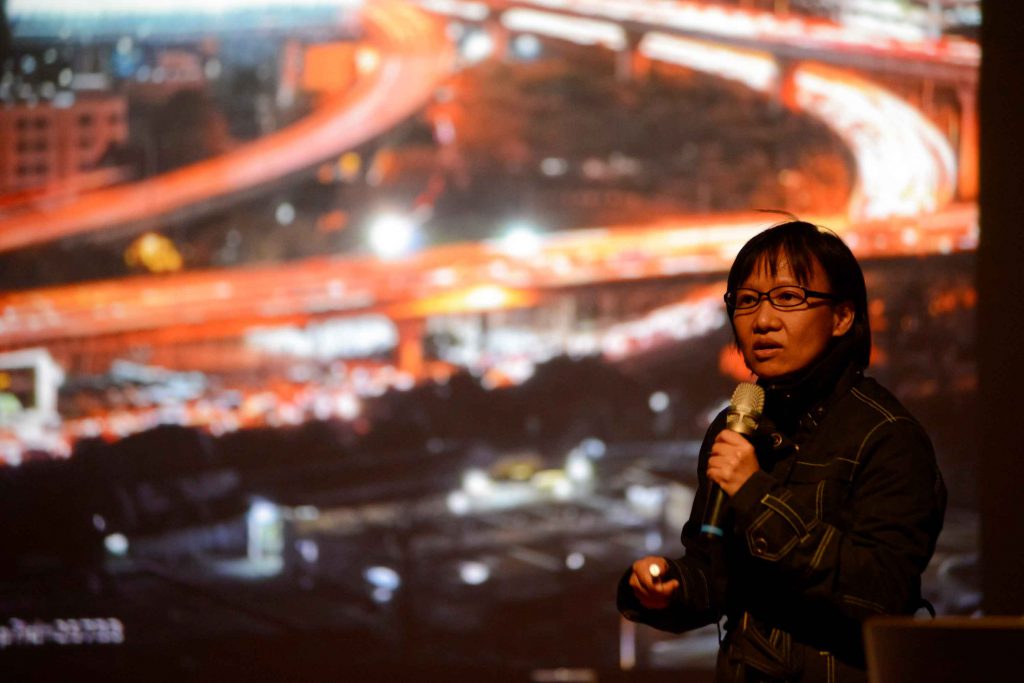 Participants were divided into groups and walked around the five distinctive areas in Santiago to look for heroes and villains of light. Each group experienced difficulty finding heroes of light. 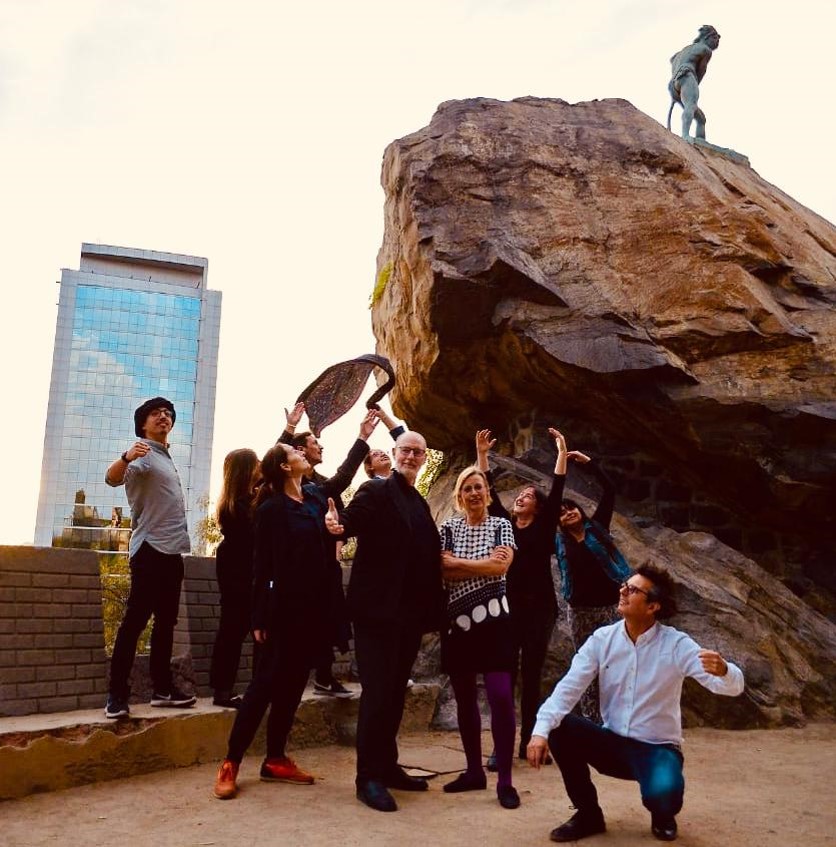 ◇Team A：SANTA LUCIA
Our group’s staring point for the survey was at the top of the hill Cerro Santa Lucia, the beautiful urban oasis in the centre of Santiago city. We began our
evening with the observation of our route from above, to then swiftly walk down that steep hill in the Park’s closing moments, just in time to drift right into the twilight of the city.

Following our path, along the Santa Lucia Street, we made our first discussion stop at the National Library to talk over the confusing lighting of the building as well of the surrounding area. Walking around the Cerro Santa Lucia and along Victoria Subercasseaux Street, we seemed to become overwhelmed by the number of lighting villains. Most dominant was glare from lighting fixtures placed in the park and huge LED screens with very intensive and dynamic commercial light.

As usually, villains are more noticeable then heroic lighting examples. But entering the cozy streets, in the direction of Lastarria and GAM, the attitude finally changed. Small, exciting, elegant, kind and creative lighting examples drew our attention. We walked to the Cultural centre GAM to find a fantastic place with great potential for improvement when it comes to lighting.
Our walk ended with interesting discussion in the magic environment of our newfound top lighting hero, hidden in one of the charming old buildings in the same neighborhood.（Aleksandra Stratimirovic） 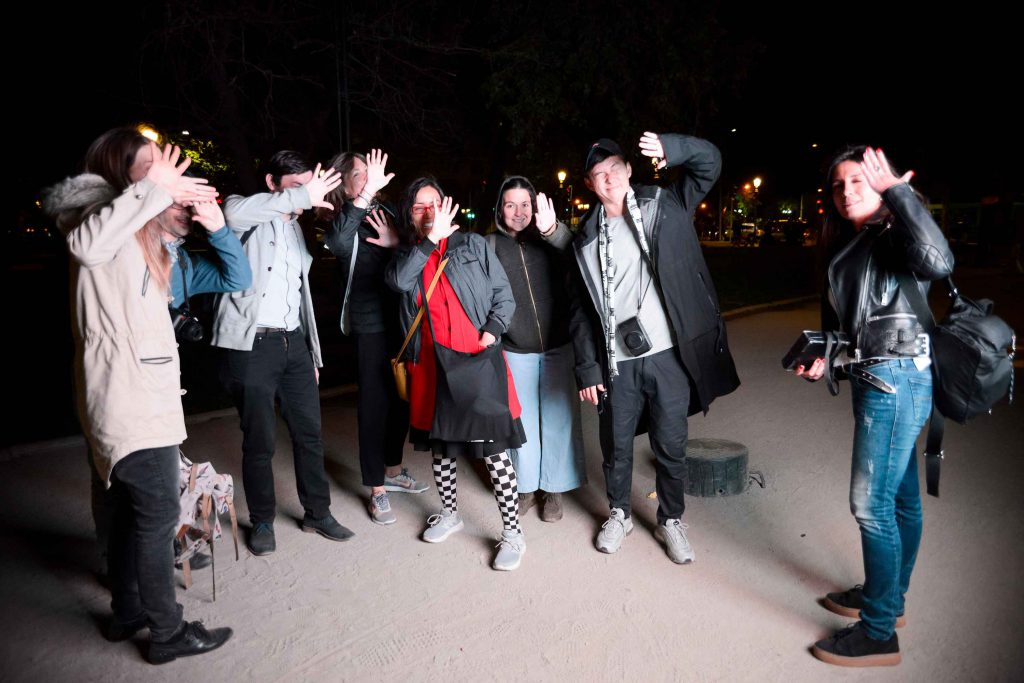 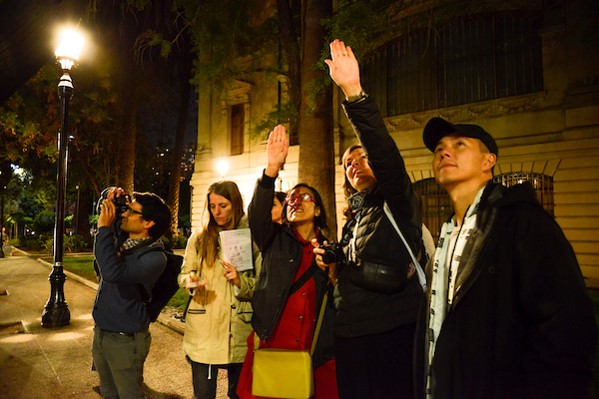 The Parque Forestal is an urban park in the historical center of Santiago located on a north‐south axis following the Mapocho river. A large road separates the park from the river. The park is home to the beautiful Museo Nacional de Bellas Artes.

Our group had a light dinner at the Castillo Forestal while we waited for the darkness to fall, so we decided to start our night walk in the center of the park. First, we walked south along the main promenade. From the south end of the park, we then walked north along the smaller and more intimate and winding paths all the way to the Fuente Alemana.

We observed that the illumination of the park consists mainly of two types of luminaires; a classic park “lantern” luminaire and a very high (15 m.) flood light luminaire (we called them “tennis court lights”). We generally found that it was difficult to find real heroes, as there was too much disturbing glare from both types of luminaires. The park lantern did, however, work well when placed adjacent to vertical surfaces, and it did create flower‐like light patterns on the ground around its base ‐ an accidental hero!

The “tennis court lights” were obviously placed to illuminate the lawns and greenery for safety reasons. We discussed this important aspect of safety and we
agreed that the lighting could have been done in a much more respectful way. The “tennis court lights” destroyed the atmosphere of the park with their brightness and size. Sometimes they even created unsafe dark shadows ‐ a perfect villain! The ultimate super villain of the night we found by the bus shelters at the north end of the park ‐ An advertising screen blasting the area with up to 3000 lux ‐ Horrible!!!

Our conclusions were that many people were using the park, either passing through or hanging out with friends on benches and lawns, even though it was a rather cold night. It seemed that people did not really notice whether they were in a bright or a dim place. Our group agreed that there were many unused opportunities to create a beautiful nightscape: e.g. a better balance of general lighting, sculptures, and fountains that disappeared in the dark, and not least the dark facade of the Museo Nacional de Bellas Artes. This became the inspiration for the students, and from this, they created a really beautiful lighting proposal.
（Lisbeth Skindbjerg Kristensen） 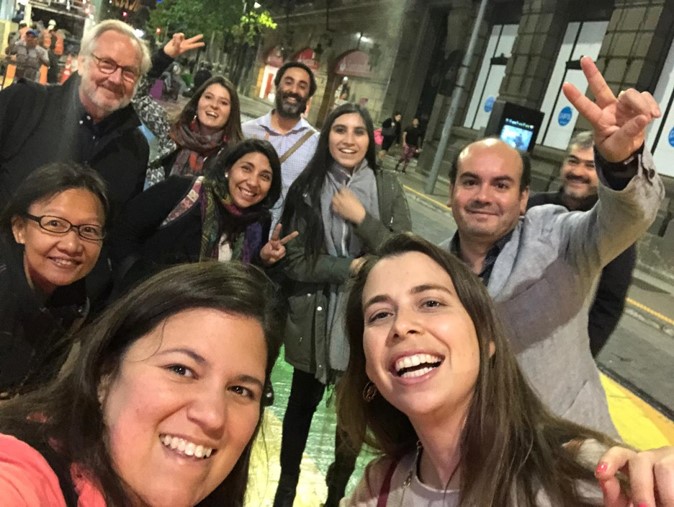 Our group was a mix of lighting designers, interior designers, and architects. We have been assigned for the night walk around the historical area Plaza de
Armas toward the new street art development which allowed us to see a different approach in urban usage and design.

We started to focus on Tribunales
de Justicia and an adjacent building where participants started to observe human behavior regarding space and light, especially light position, color,
intensity, and distribution. We discussed and identified what and why HERO and VILLAIAN as well as possible ideas to improve for the urban context. Later
we walked to the Plaza and park area again. In the park super bright provided on empty seats where people enjoyed shadow through unintentional moonlight effect and shadow.

It is understandable that the area is not quite safe by night. However, in this case, brutal light did not seem to support human needs. Ambient light from inter‐reflected surrounding walls seems to provide enough ambient. Again, we identified and discussed HERO and VILLAIN.

Finally, we walked toward new street road development which is government strategies to generate foot traffic for the town as an attraction. We discussed the potential to allow a fun and energetic mood along the road. In conclusion, it is quite good exercise for the group to develop observation skills along with experienced lighting designers that could provide inspiration and attitude. I could see development in our participants that their view in luminous environment have changed.（Acharawan Chutarat） 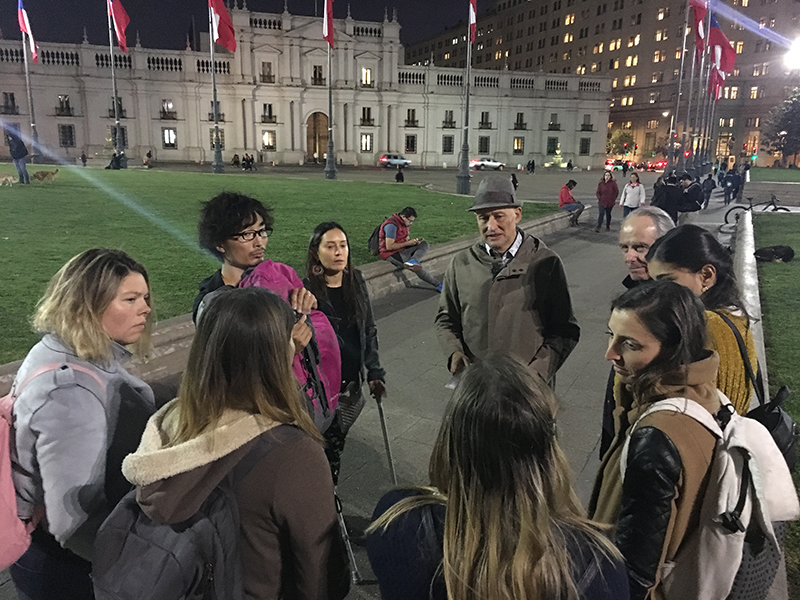 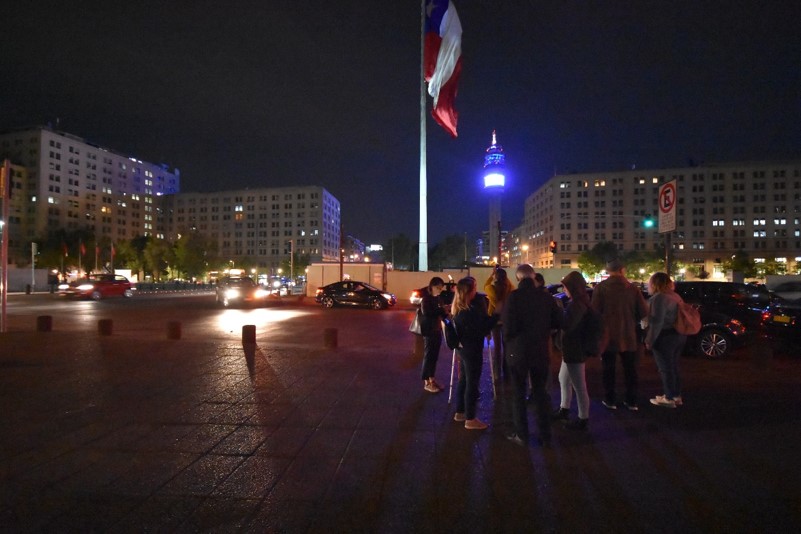 Walking through the two plazas and the government office area across the Palace of the president of Chile, the center of politics. It is a place subject to the contrast between the dazzling uniformly illuminated Constitution Square behind the Palace and the Square in front of the Palace that is not lighted up at all and sunken in the dark.

A huge national flag, which is a symbol of the country, also the pole alone was illuminated white and it got out as a criminal.
Also, it was an impressive scene that the walls of massive government office buildings were stained with light from the advertisement display of the TV tower.
Many of us were wondering why the bronze statues scattered in the plaza are sunken into the darkness and why they are not lit up.
We concluded our discussion with the opinions that there are many places need to be improved.（Noriko Higashi）

Classical street lights are installed in the alley where the atmosphere of the old city drifts.
The light of the low color temperature of the sodium light illuminates the building and complements the atmosphere.
People were enjoying dining and drinking, however, that light had influenced the interior space of houses and hotels, and it was judged as a criminal.（Mikine Yamamoto） 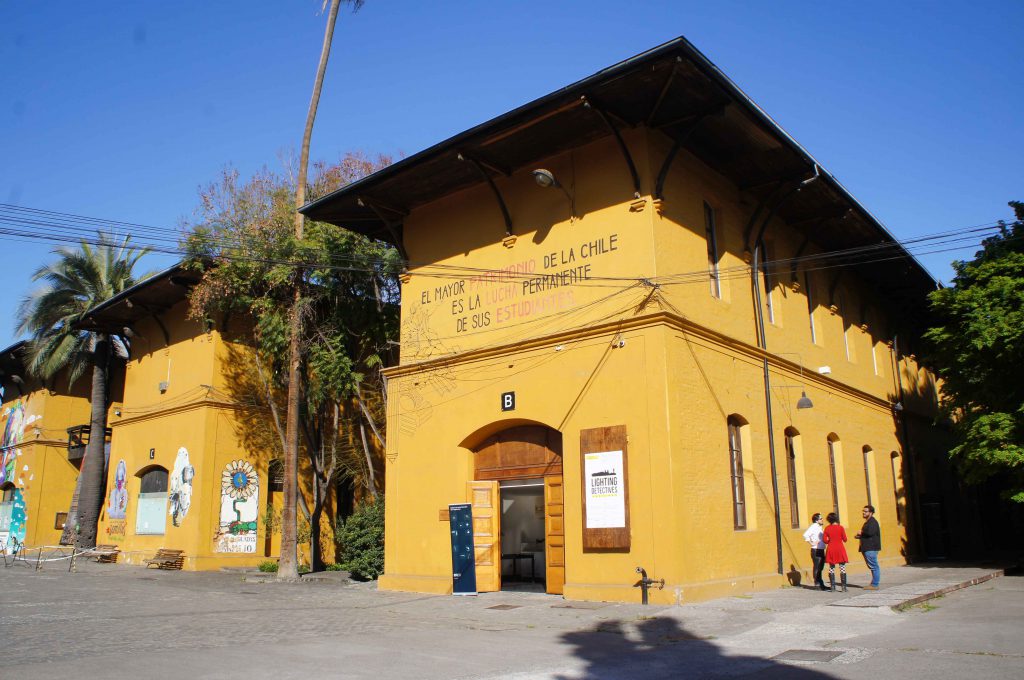 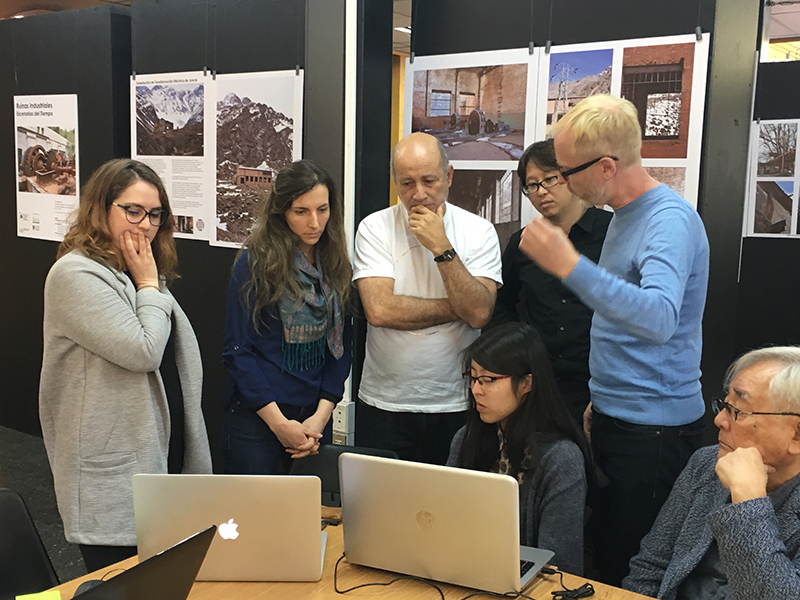 5 teams gave a presentation. Each team introduced their findings, heroes and villains of the area during night‐walk and showed their proposals for the area.
In-depth discussions between professional lighting designers and very knowledgeable students developed into CG renderings and sessional drawings which transformed into a well-thought-out slideshow presentation.

Although it is once a year, the annual forum is a very important activity that lighting detective core members from all over the world meet and share their experience and knowledge with local people in the different cities and towns and discuss their lighting environment there.（Kohki Iwanaga + Noriko Higashi） 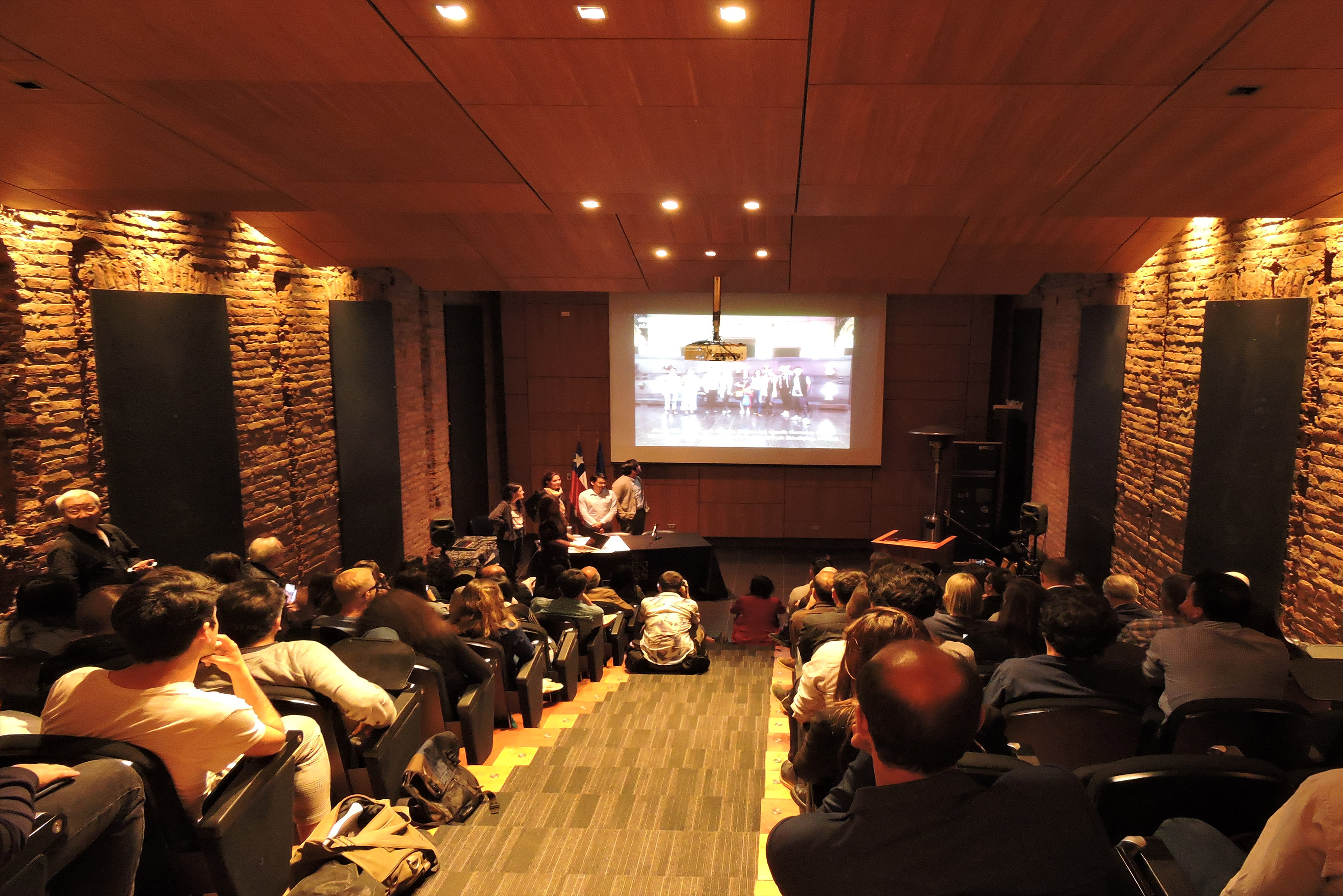 Veneu is packed with crowds 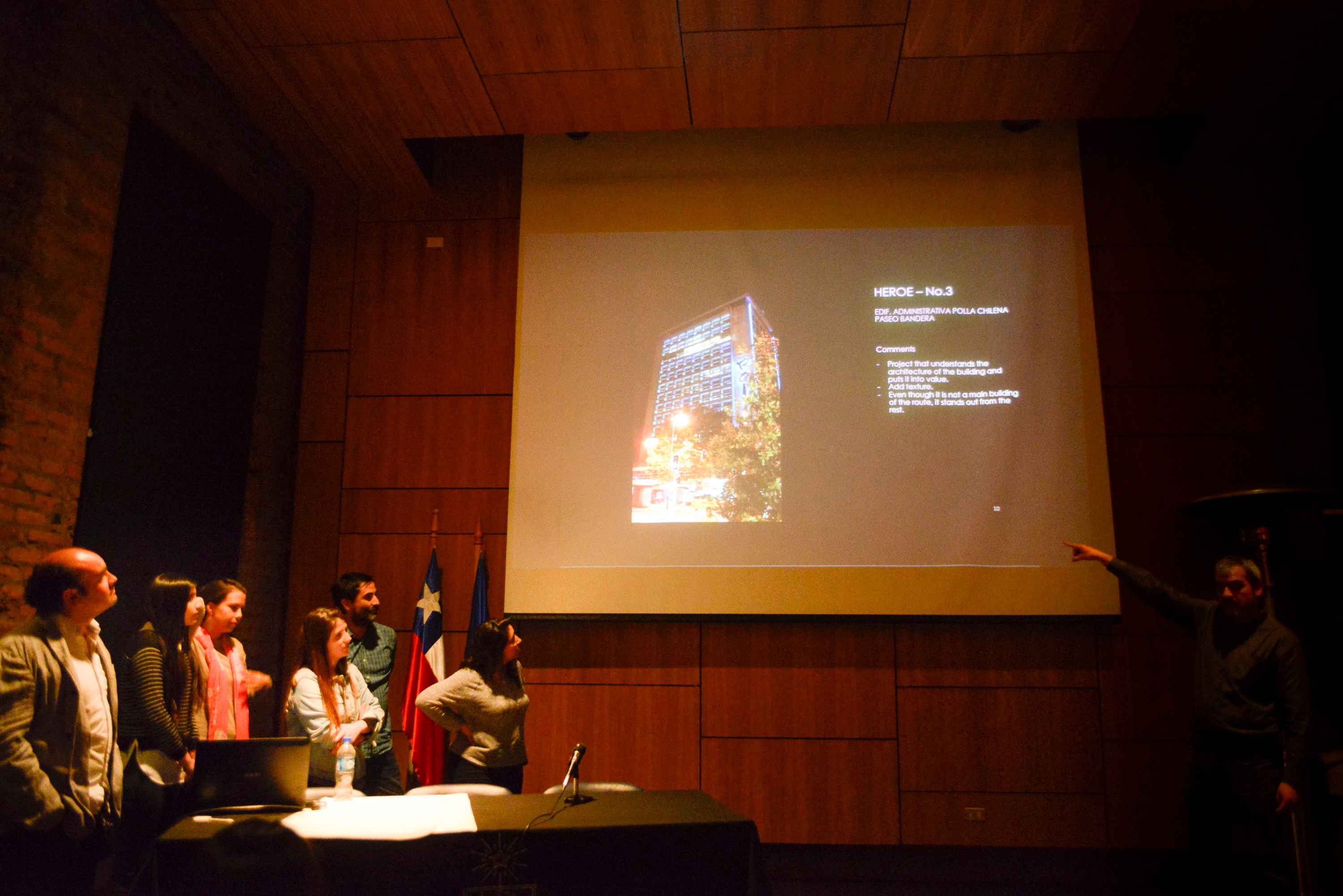 Proposals by each group

RE-IMAGINING GOLDEN MILE 2019.11.01 Sherri Goh+Niken Wulandari Sutanto+Quratuaini Jamil+Clement Lee Golden Mile Complex and Golden Mile Tower are two of the most iconic buildings in Singapore that were completed between 1973-1974. Lighting …