Remote Salon/Light within a 100 meters from Home

While we are forced to postpone our explorations around town due to the coronavirus, we held a salon online. 25 participants reported on the lighting within a 100 meters of their homes. 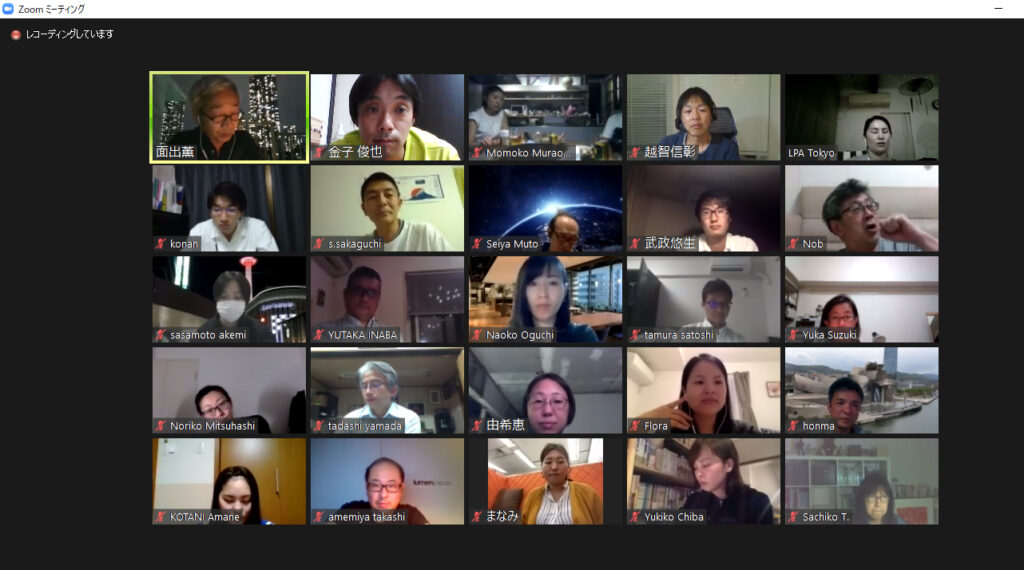 The Shomei Tanteidan’s very first ZOOM Salon. We had lively discussion for 2 hours with 25 participants.

Due to the spread of the Novel Coronavirus COVID-19, a state of emergency has been declared and our Shomei Tanteidan Members restricted to their homes. Our team had to cancel our stroll about town planned for mid-May. While we cannot leave our homes, online events for people with other hobbies have started popping up, leaving us the challenge to organize an event in a completely different situation than before.
While there were voices that were raised of concerns regarding an online event being slightly contradictory to the Shomei Tanteidan’s usual fieldwork style. However, considering the unknown of how long this situation will last, after discussion with our Stroll about Town Planning members (SQUAD), we decided to organize an online salon. 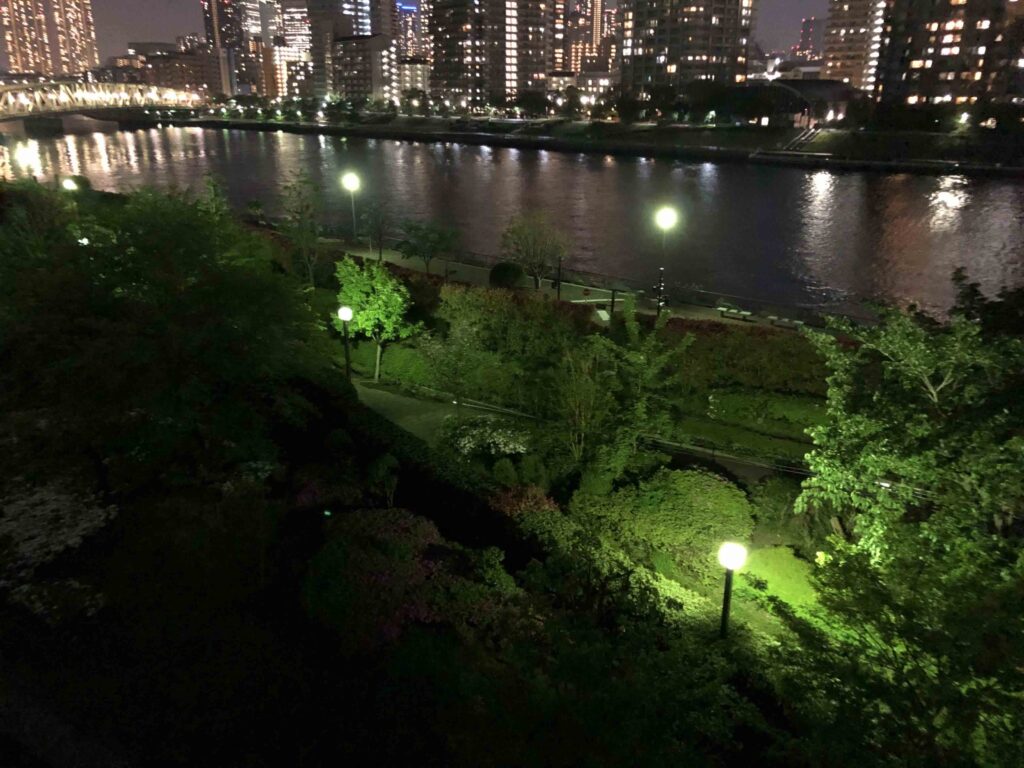 The theme was ‘Light within a 100 meters of your home’ which was hopefully one that allowed individuals to remain in their houses or venture outside only slightly while exploring. Honestly, we were worried about how much conversation and discussion we would be able to find, but to our surprise, all 25 participating members had their own topics. Some even boasted they had more after our salon!

There were participants from, Tokyo, Kyoto, Shiga, Nagoya, Yokohama, Chiba, Sendai, and even Holland. We were able to have an event regardless of borders thanks to the online format.

We first started with a round of self-introductions in combination with some talk about how everyone’s situation is during this COVID-19 crisis. Some had their work become completely remote, one even had their companies taken in by the parent company while working remotely, and their working situation changed drastically whilst at home. Others had basically no effect on their lives, traveling to work as normal. However, what was sure is that it was a precious chance to talk ‘face to face’ again after a while.

The keywords for this salon in regards to its topic were brightness (glare), color temperature, and color lighting.

The most common opinion across the board, was that the LED crime prevention lights and mercury lights emitting irritating light that was too bright or too white. This opinion was heard everywhere, regardless of location. Furthermore, when the mercury lamps burn out or complaints were made about it being too dark, they are replaced with even brighter crime prevention LEDs. It seems many are disappointed that apartment owners don’t seem to care about the surrounding lighting environment and install bright LEDs indiscriminately in public areas. Some did suggest that if it were unbearably bright, a complaint could cause them to put covers on the light reducing its brightness. There were also voices that were concerned of the mismatch between lighting in High-rise apartments in comparison to the general atmosphere of the town itself, concluding that compromise, balance, and unity is most important. Leader Mende-san at one point exclaimed ‘This is ‘Light Trespassing’ in my home!’ regarding the bright lights from the part outside his home. 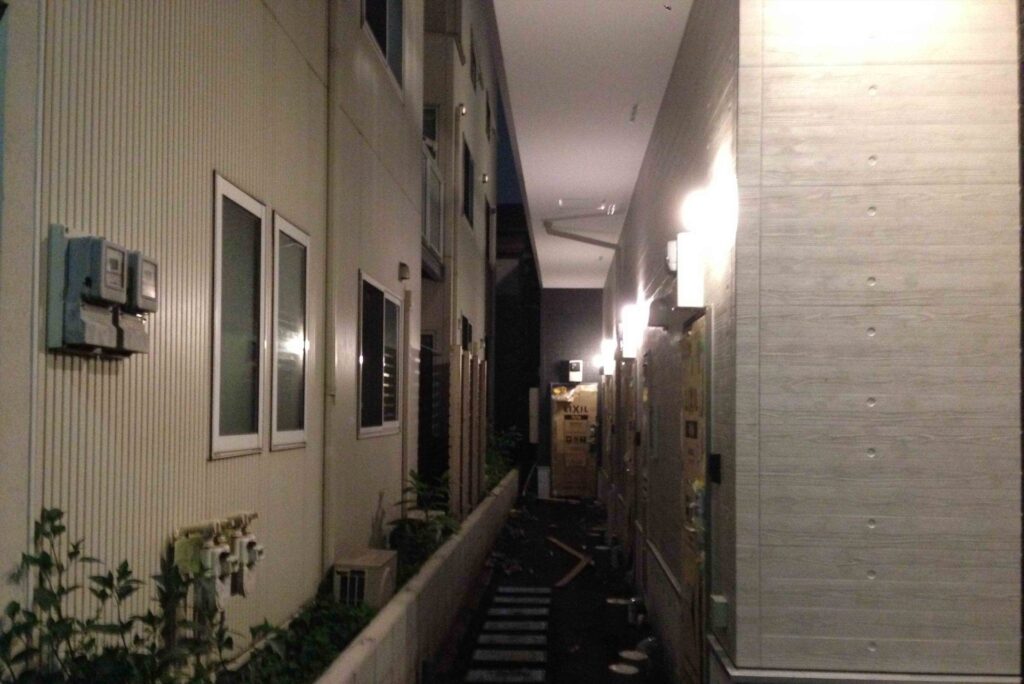 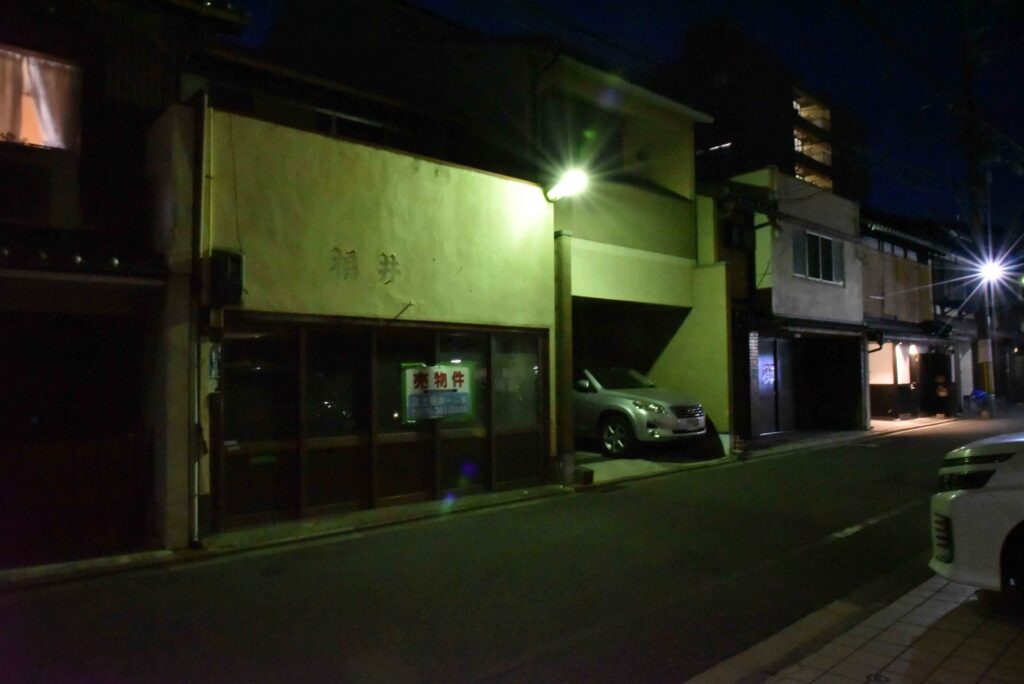 As lights burn out they are replaced with even brighter LEDs

On the topic of color temperature, opinions were split in to some that thought if you switch streetlights to something with lower color temperatures would have an immediate calming effect, while others thought that higher color temperatures could look great in certain locations. Some raised Nishiokubo as an example, with the nice sunlight that seeps into the house during the daytimes and the high color temperature lights in the streets are very beautiful. I thought that the important part of creating a light environment is to build upon the image that the town already is working on appealing. 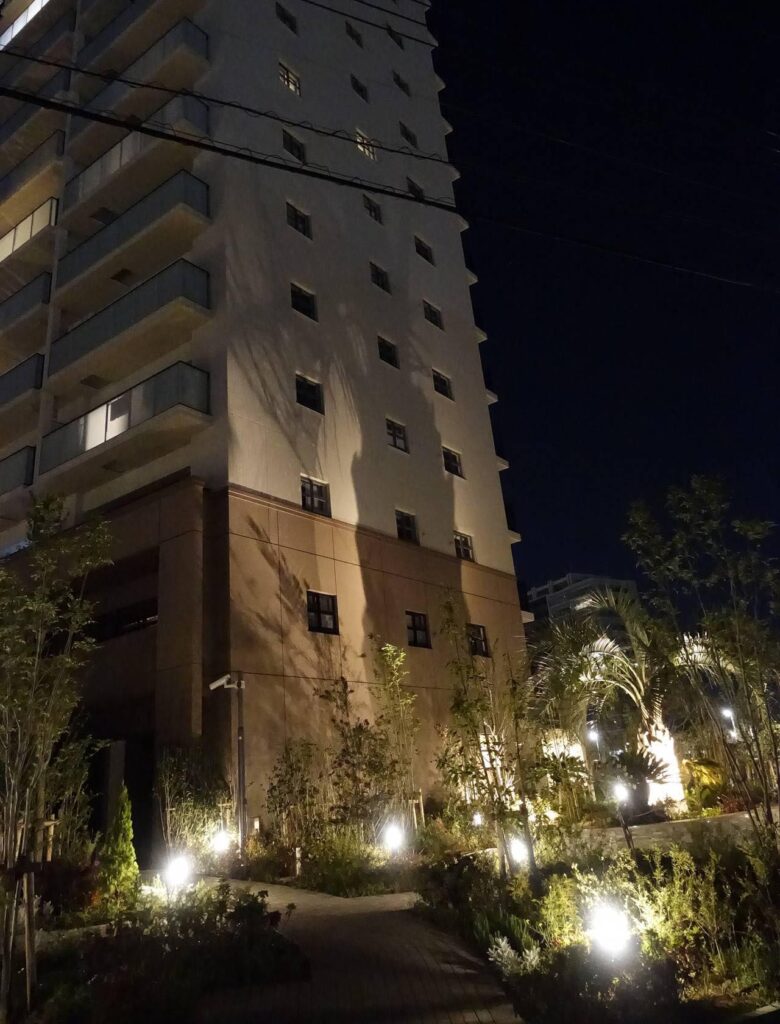 Other lights that were brought up as villains other than streetlights were spotlights used for up-lights for trees or to light passageways in residences. There were reports of lights pollution where some tree up-lights were way brighter than what is required to light trees, so bright in fact, that it lights up the walls of the adjacent apartment building up to the tenth floor.

On the topic of color lighting, there was a case introduced where a hotel was built around a station without many buildings that stood out around it. The hotel’s bright blue sign tinted the surroundings blue as a result.
There were also discussions on whether the icons of towns should be lit or not. It seemed fine with something like Tokyo Tower, where there is only one tower, but the multiple towers in a residential area in Sendai that was introduced were all lit up with blue light and were standing out quite a lot disappointing many.
There were also many locations lit up in blue in thanks to our front line medical workers in these trying times, with some that were introduced in the salon being the Kyoto Tower, and rainbow bridge, with many having good impressions of these locations. 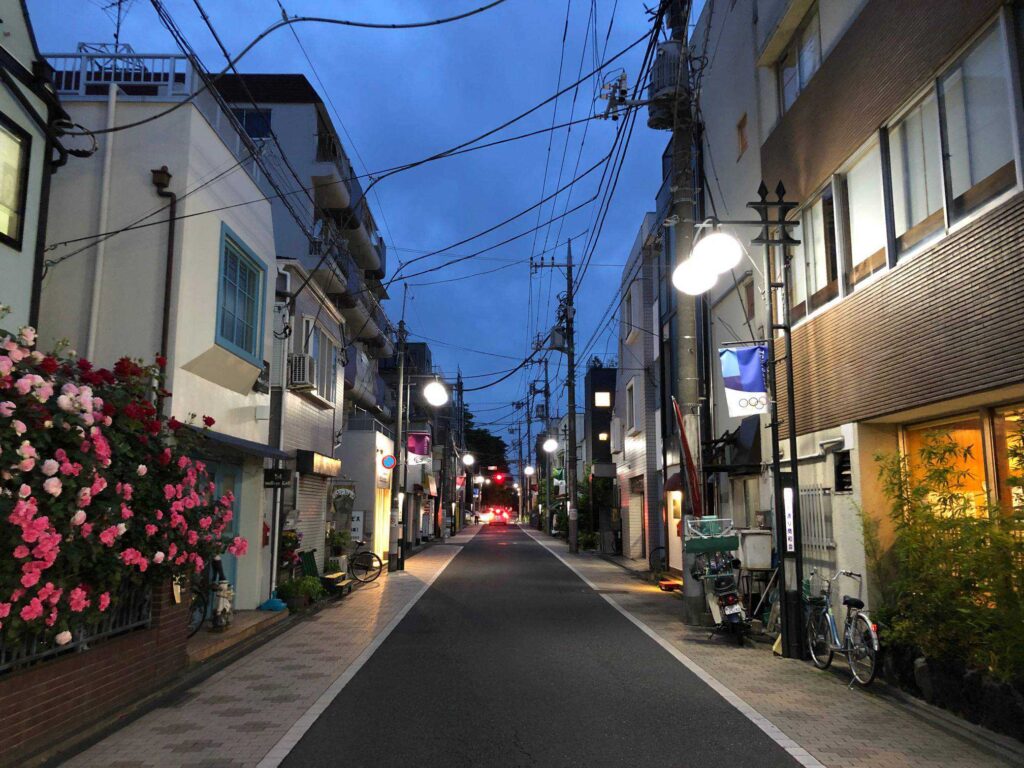 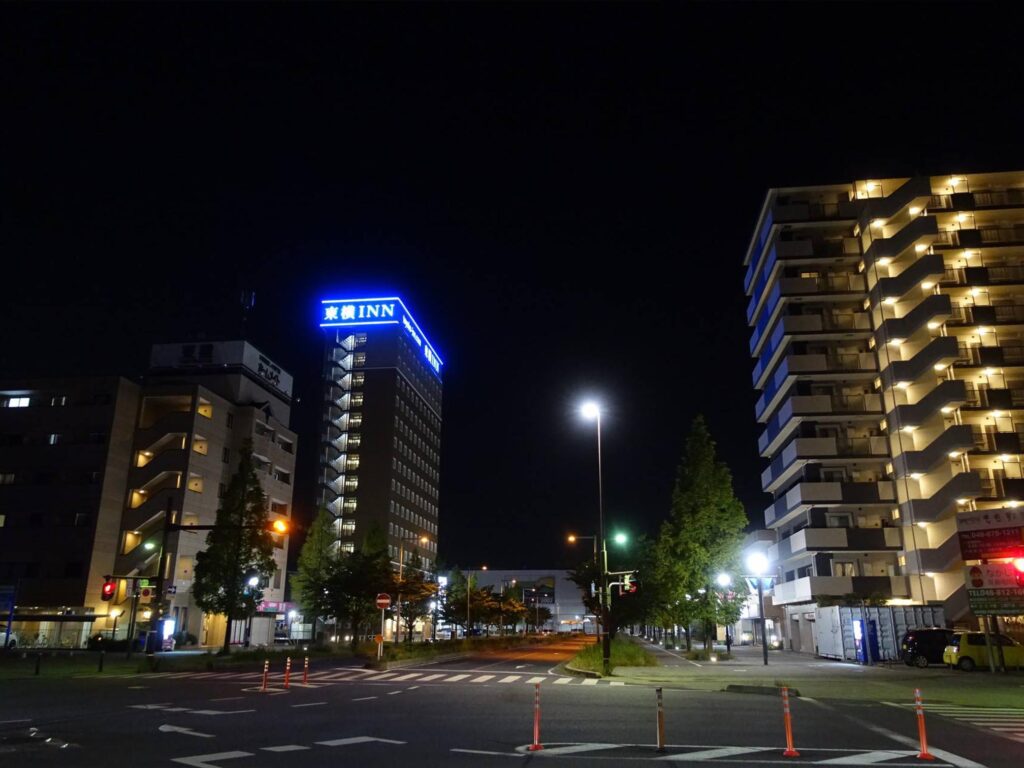 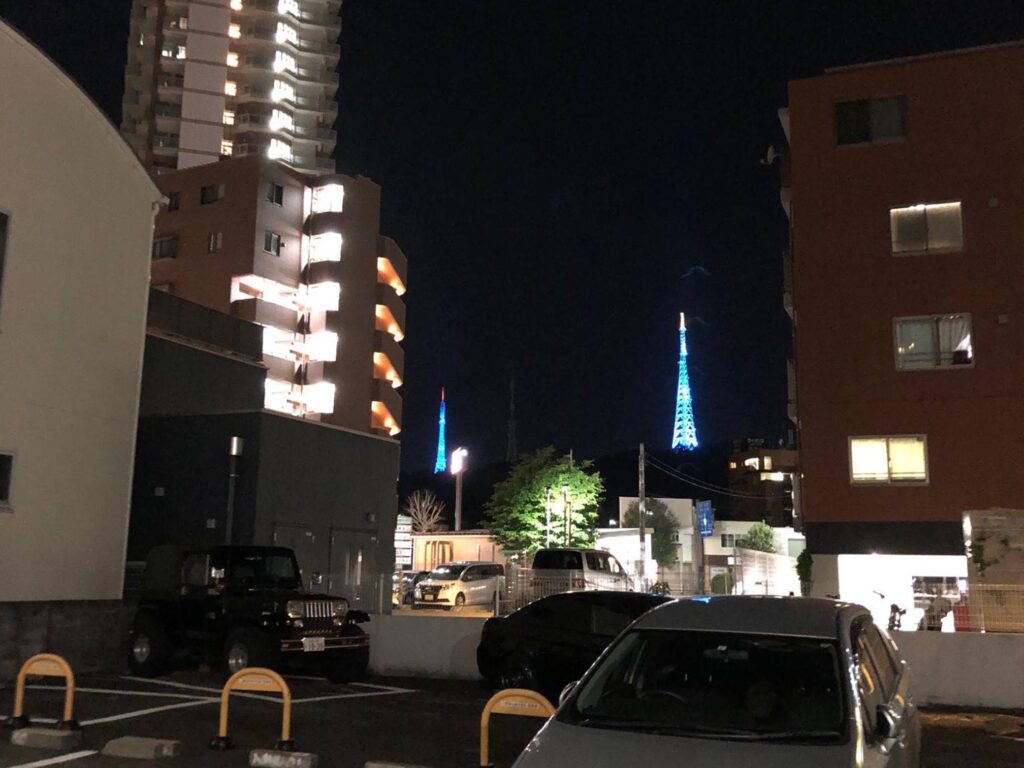 The towers that are lit up in blue connect to the residential area. 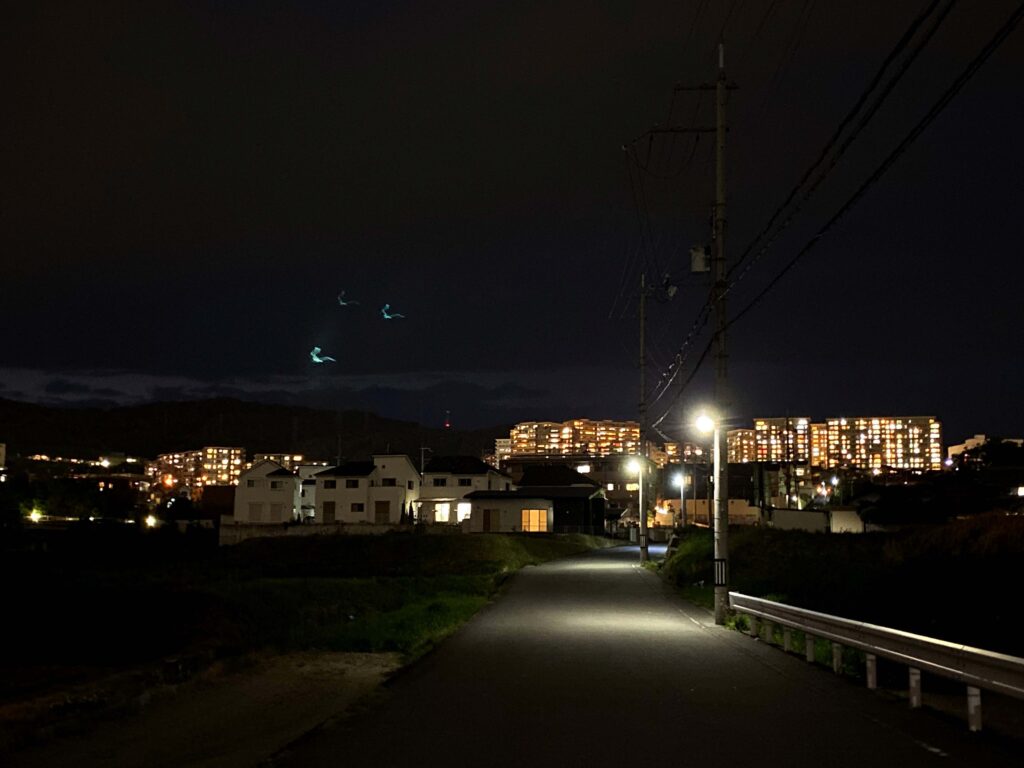 A random residential area in Kansai around 19:30. Most of the apartments are lit with a warm color temperature 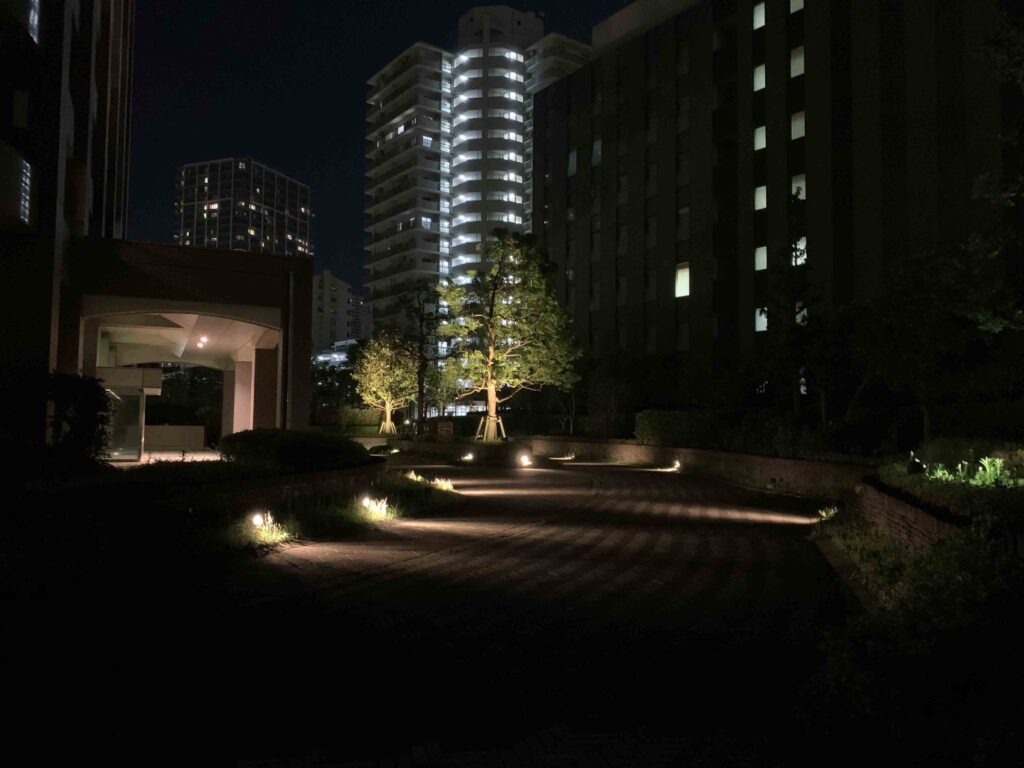 There are nice shadows in this high rise apartment

Some said due to their extended amounts of time spent in the home and taking walks, there were things that they noticed that they wouldn’t have before. Within those, there was an example of a high rise mansion that was built in the financial bubble era of Japan, which had very dark landscape lighting. It was dark enough you couldn’t see your footing, but that darkness now seems calming and somehow cannot be found in the high-rise apartments built today. There were also observations that said they found that perhaps the color temperature of homes have lowered in general. Some also found interest in the changes in the way that sunlight shines into their rooms during different times of day, and also found inspiration to look at architecture across time as well.
As there were more individuals at home due to the coronavirus, some observed lights in residential areas lighting up earlier than usual. It was surprising to see most of the lights on for large apartment complexes.

Not limited to reports of our current situation, but what we noticed because of the extended period of time staying at home, changes due to the coronavirus, our discussion ranged far and wide. Perhaps it was also participating from home in a relaxed environment, the two hours of the salon flew by. It wasn’t a meeting where we were going to come up with a conclusion, but I believe that learning about the lighting environment elsewhere in the world was very fruitful for everyone.

This year marks the 30th Anniversary of our Shomei Tanteidan, and we will continue our activities in ways we can, even under these circumstances. We plan to hold another salon with a different theme soon, so please feel free to participate! (Noriko Higashi) 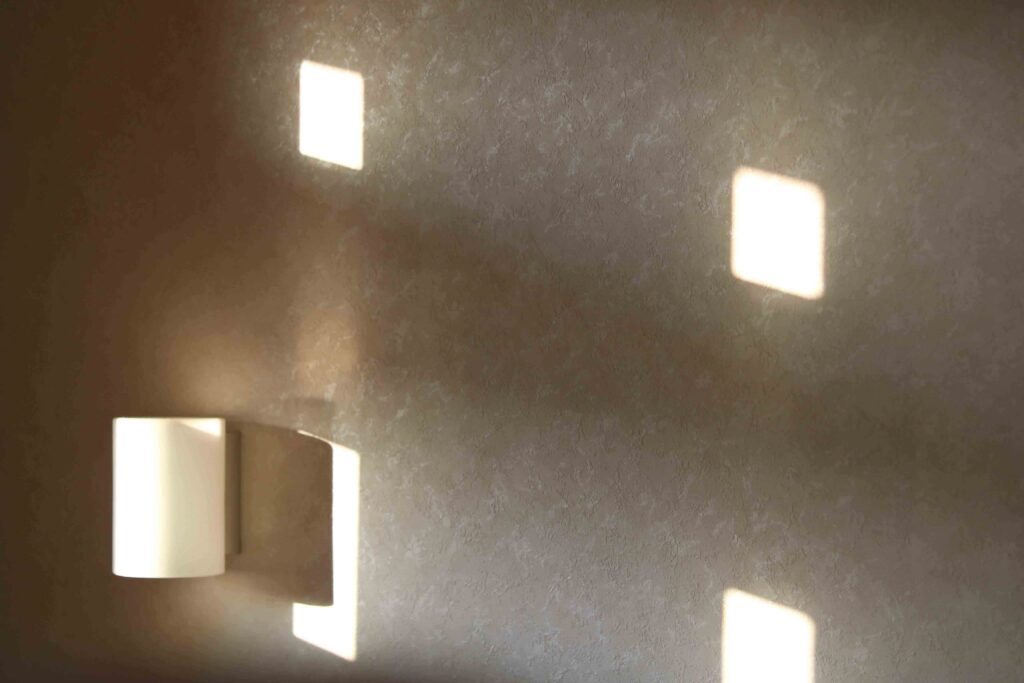 Started paying more attention to light that spills into the house during the day. 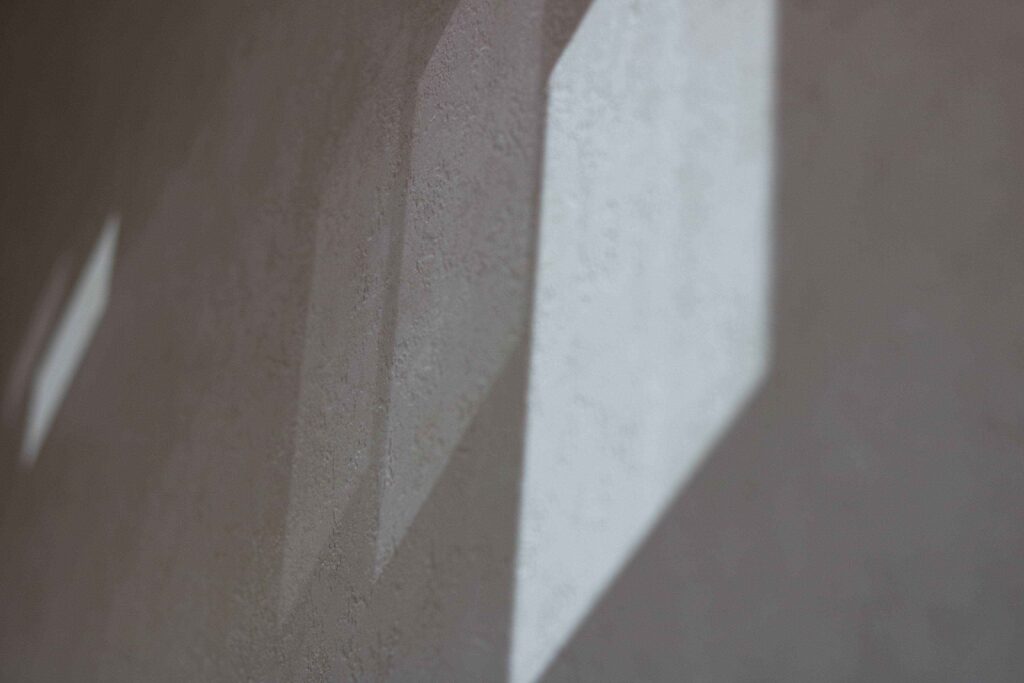 Changing the mood in the room

“Zaha”such a commanding name. You may have heard of this famous name belonging to one famous lady. My own name “Kaoru” has a more feminine ring to it and may be more fitting for a lady of such great accomplishment. M…

New development and activity at the fishing port generate energy in Korea’s second largest city, Busan. In sharp contrast with the dark waters, stores with flashy neon signs edge the perimeter of the bay and people sit mesmerized along the …