Now that the heat of the summer is over, the Lighting Detectives converged on Sankeien Garden in Yokohama to see the new harvest moon glow over traditional Japanese architecture and garden grounds and experience moonlight. Even though it turned out to be a rainy day, we were still positive that the clouds would disappear as we left for Yokohama. 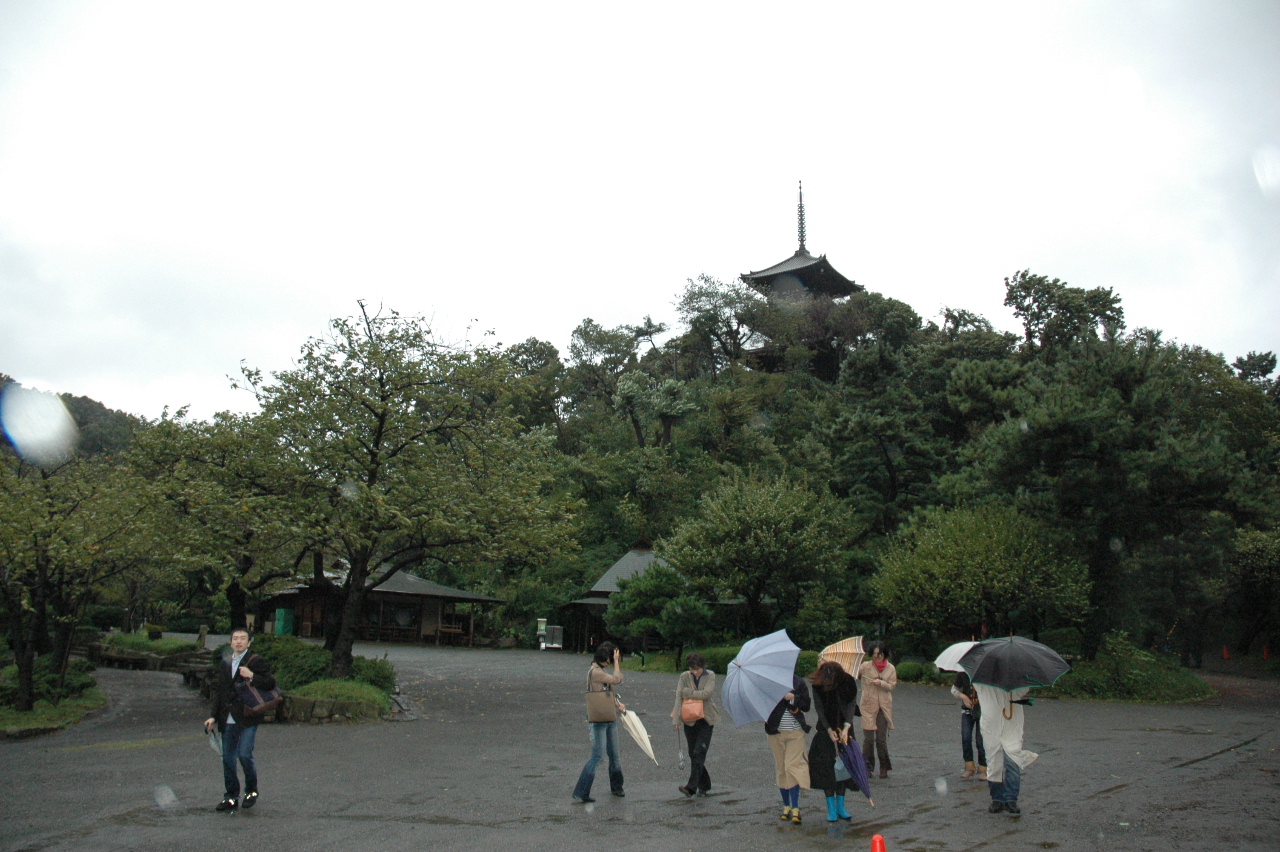 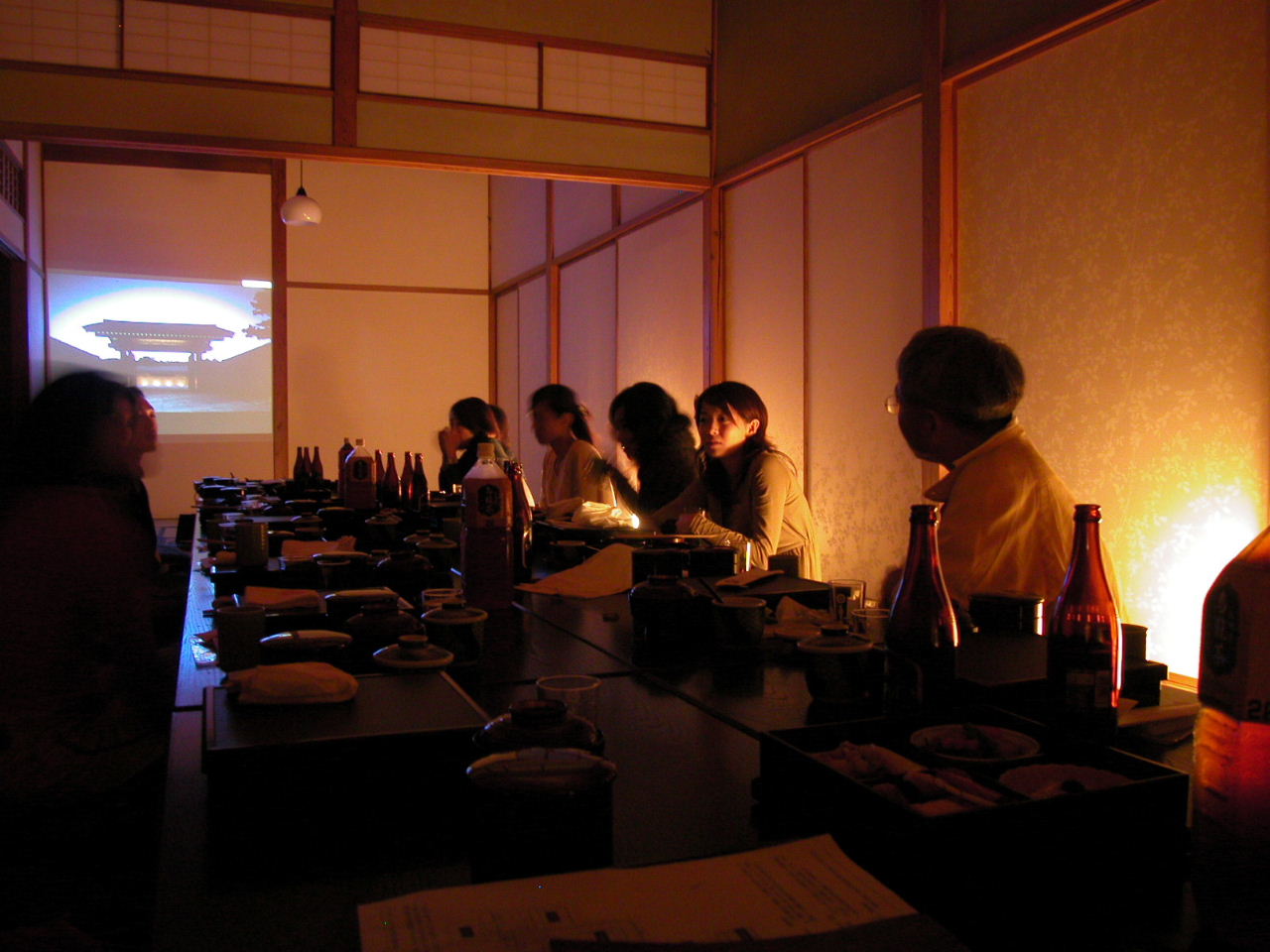 After a train and bus ride, 22 members of the Lighting Detectives arrived at Sankeien at 4:00 in the afternoon. Of the 17 architectural structures strategically placed around the garden, 12 are labeled Important Cultural Assets and were moved to the garden grounds from Kyoto, Kamakura, and other places from around Japan. The garden has a long distinguished history and in celebration of its 100th Anniversary, the garden was open to visitors at night. In the middle of our moon watching, the weather took a turn for the worse and chased everyone, but the Lighting Detectives indoors. Soaking wet from the waist down and most umbrellas blown inside out, the excitement of the storm faded and members grew weary as dusk set in and the moon came up.

As Lighting Detective spirits and body temperatures started to dip, we all gathered indoors at the Kakushokaku, formally the residence of local merchants, The Hara Family, and recently renovated and restored to original state for the public’s use. The detectives ate boxed lunches in a simple, but elegant traditional Japanese-style room with architectural detailing from the Taisho Period. After the break the plan was to photograph the full moon as it rose over the garden, but the weather kept the moon hidden and us indoors. Instead, Lighting Detective members viewed a slideshow of photos taken on a previous trip to Sankeien Garden, photos from photographer Kenji Ishikawa`s Moonlight Blue Collection, and a short presentation from Chief Kaoru Mende on Japanese Light. With a little foresight and impromptu planning the moon watching tour turned into a mini lecture, slideshow presentation, and discussion hour, but unfortunately ended without seeing the full moon.

Japanese Architecture and the Moon 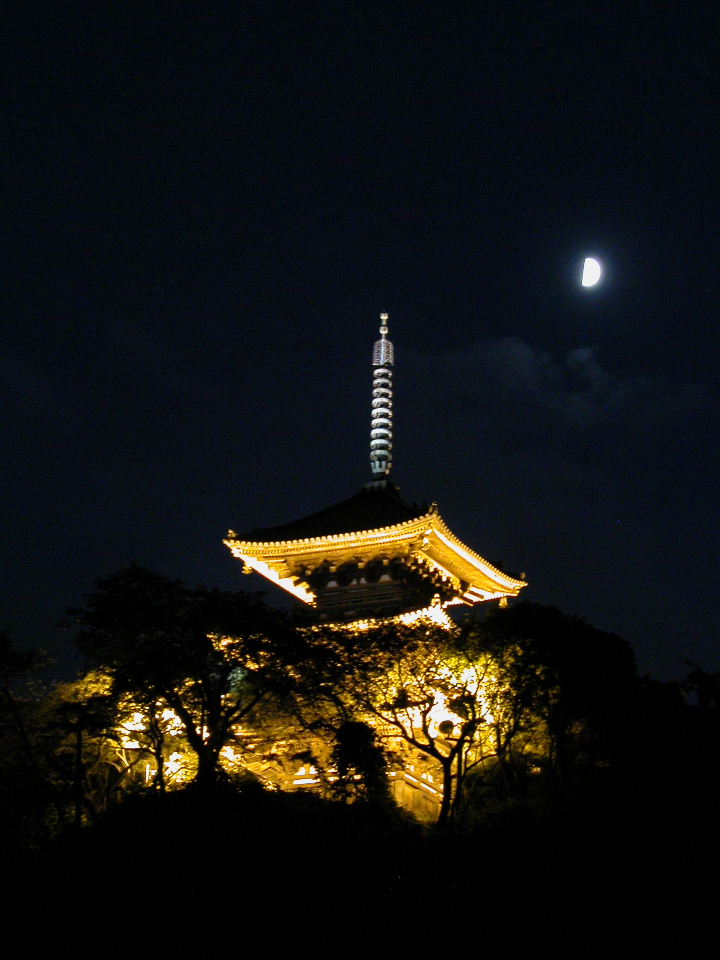 On the dry run for the moon watching tour the weather wasn’t any better, but after the sun went down and the moon came up, the clouds shifted to revealed the moon above the three-storied pagoda of old Toumyoji Temple. It wasn’t a full moon, but just like a cup of good coffee and a cigarette, I could feel how Japanese architecture and moonlight go together. Because of Japanese customs related to the full moon and moon watching, Japanese architecture and the moon are deeply intertwined. Believe it or not, in many temples and pavilions there is often a platform specifically for moon watching. At the Katsura Detached Palace in Kyoto, the garden was designed using the rules of perspective and the full moon as the vanishing point. In such rock gardens as at Ryoanji Temple and the old Imperial Palace in Kyoto, highly reflective white sand is used to reflect moonlight. In earlier times when people depended on light from oil lamps, the moon was without a doubt a fascinating source of light. Sankeien Garden is surrounded by hills on all sides, shielding it from intrusive outside light, making it possible to see the true brightness of the moonlight. After experiencing the moonlit garden for myself, I could feet the rich sensation of the elegant pastime of moon watching deeply routed in Japanese culture.

Wien is a city of artistic culture built upon the glory of the Habsburg Family Rein. Floodlights illuminate the heavy, stone architecture along the old streets, but just across the way is newer architecture with systems of LED`s that illumi…

22 December 2005 It was a chilly winter night for the December 22, 2005 Candle Night event. Across the street from the new Otomesando Hills construction site in the final months of opening-day preparations, soft, warm light danced along the…