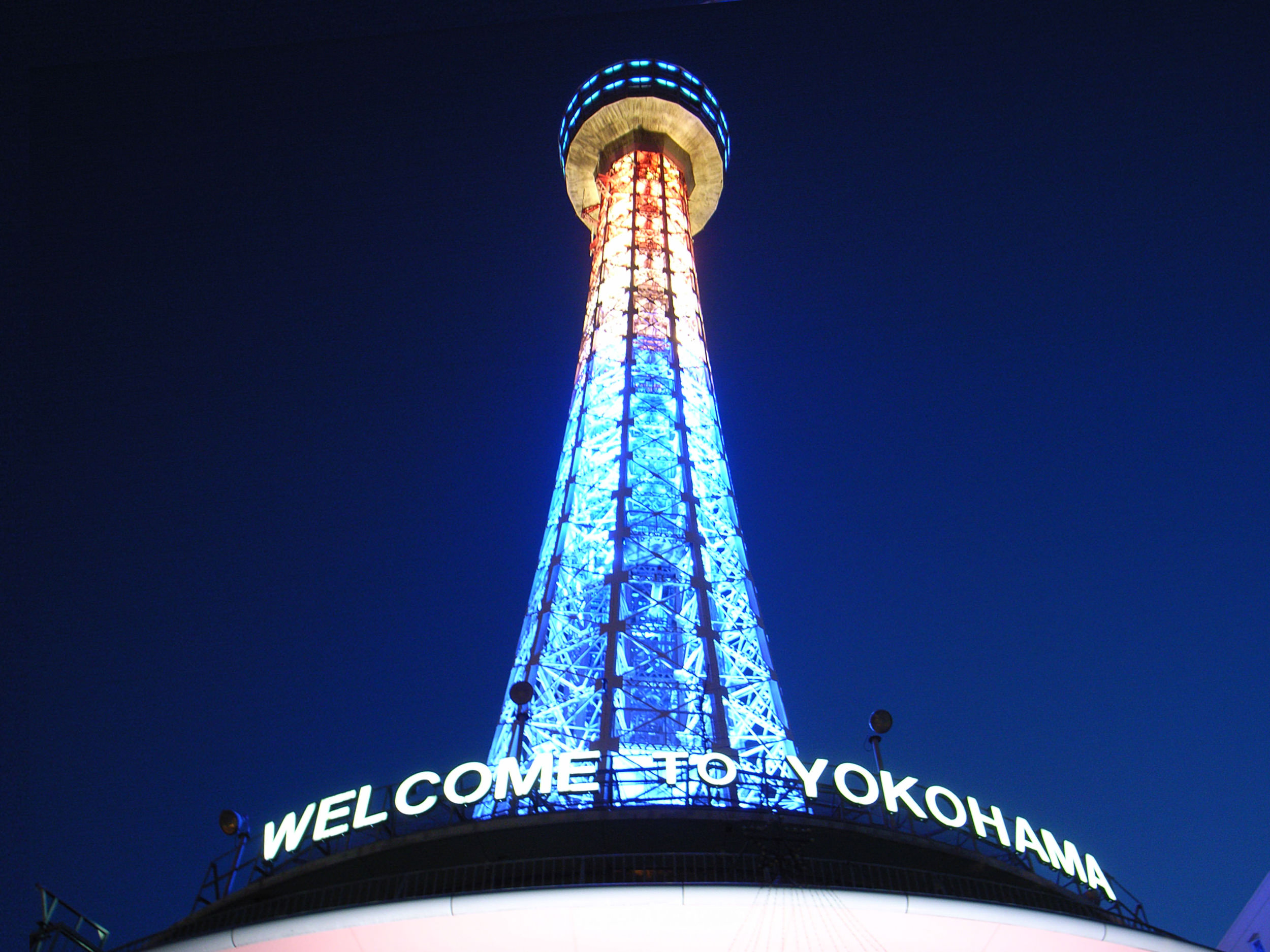 It has been a long time since the Lighting Detectives have been walked Yokohama. This autumn evening 24 members participated in the walk, along with member of the Yokohama City & Urban Design Group.

Our first stop on the tour was the Yokohama Marine Tower, not usually open to the public, but with special arrangements our group climbed to the top to view the night scene. The industrial area along the bay had an orangish glow from low-pressure sodium lamps, in contrast with the residential area, which had a whiteish glow from mercury lamps. The lighting surrounding Minato Mirai is a large part of the whole lightscape with signature lightmarks like the Landmark Tower, the colorful lights of the ferris wheel, and flood lights from the baseball stadium. Every direction in our 360-degree view presented a different story for the city.

After climbing the tower and jumping aboard a boat to see the best of Yokohama nightscape from the water, our last stop was the newly opened commercial complex, Yokohama Bay Quarter, followed up by the all-important post-walk dinner and discussion. The Lighting Detectives were able to hear straight from Yokohama City & Urban Design Group about invaluable topics concerning the city and how the nightscape can become even more dramatic and dynamic.

My impression was not just of a typical waterfront city with dots of light everywhere across the nightscape, but modern and historical landmarks were also illuminated. Unnecessary lighting was gracefully eliminated helping to create a nightscape that won’t be able to keep the curious and playful away. 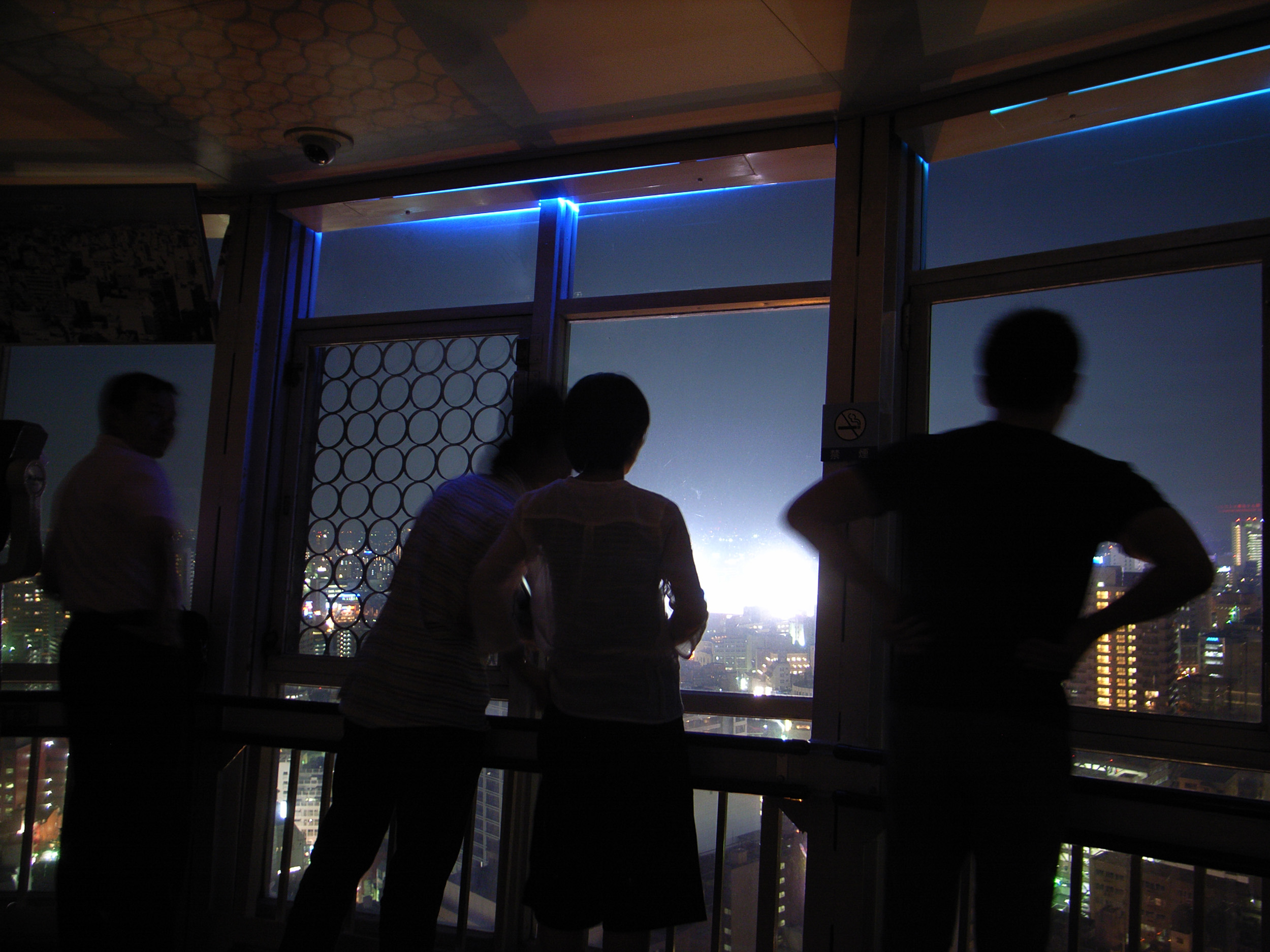 View from the top.

Marine Tower, built in 1961 to commemorate the 100th anniversary of the reopening of Yokohama Bay, is the original symbol of Yokohama.

Closed at the end of the 2006 Christmas season and set for reopen in the spring of 2009, the tower is in the middle of a makeover. However the Lighting Detectives were allowed special permission to climb the tower to observe the view. Black lights in the elevator accompanied us on the ride upwards to the 100 m high, 360° viewing observation deck. The viewing deck has the perfect lighting conditions for night gazing with only 0.5 lx at floor level. One lap around the tower provides an eyeful: waterfront loading docks with orange lighting, the Bay Bridge illuminated in blue light, the yellow ocher moon, white lights of the skyscrapers, glimpse between buildings of the lights from China town, and the elevated highway cutting through it all!

The combination of all of these different lighting elements equals the Yokohama nightscape, and all together, the elements are individually perceived as heroes of light (except the stadium lighting, ugly!).

View from the top. 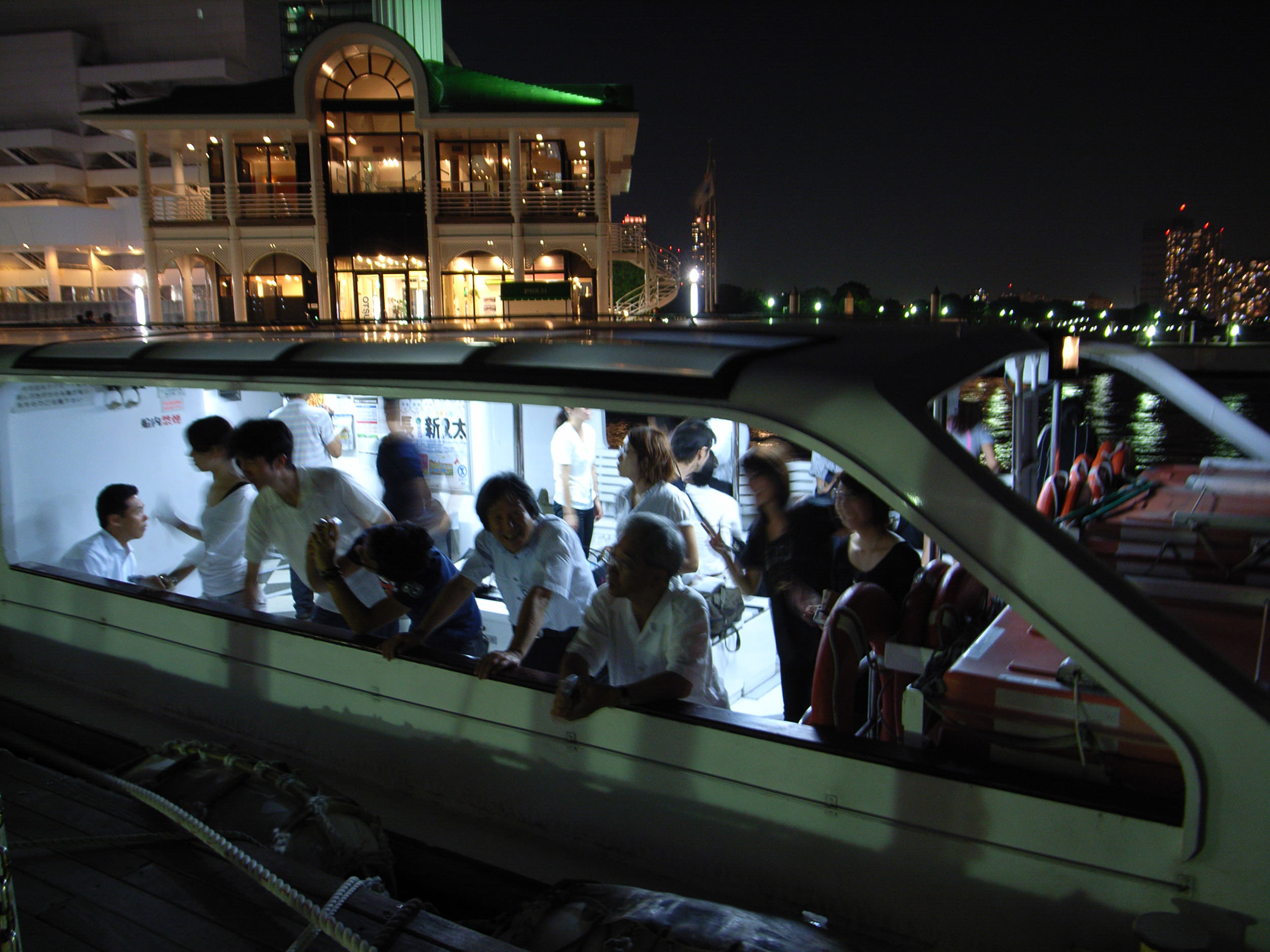 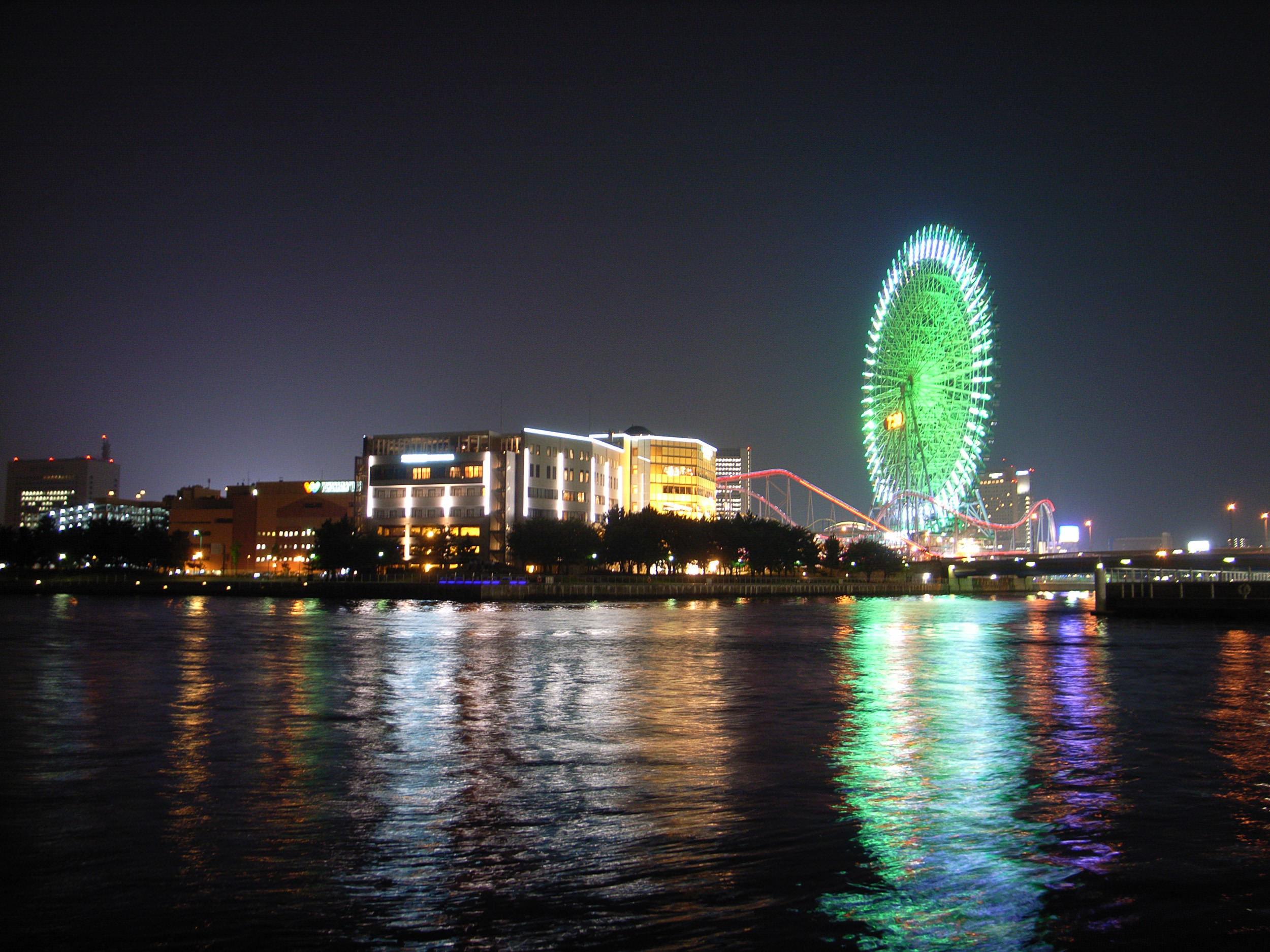 View from the waterbus. 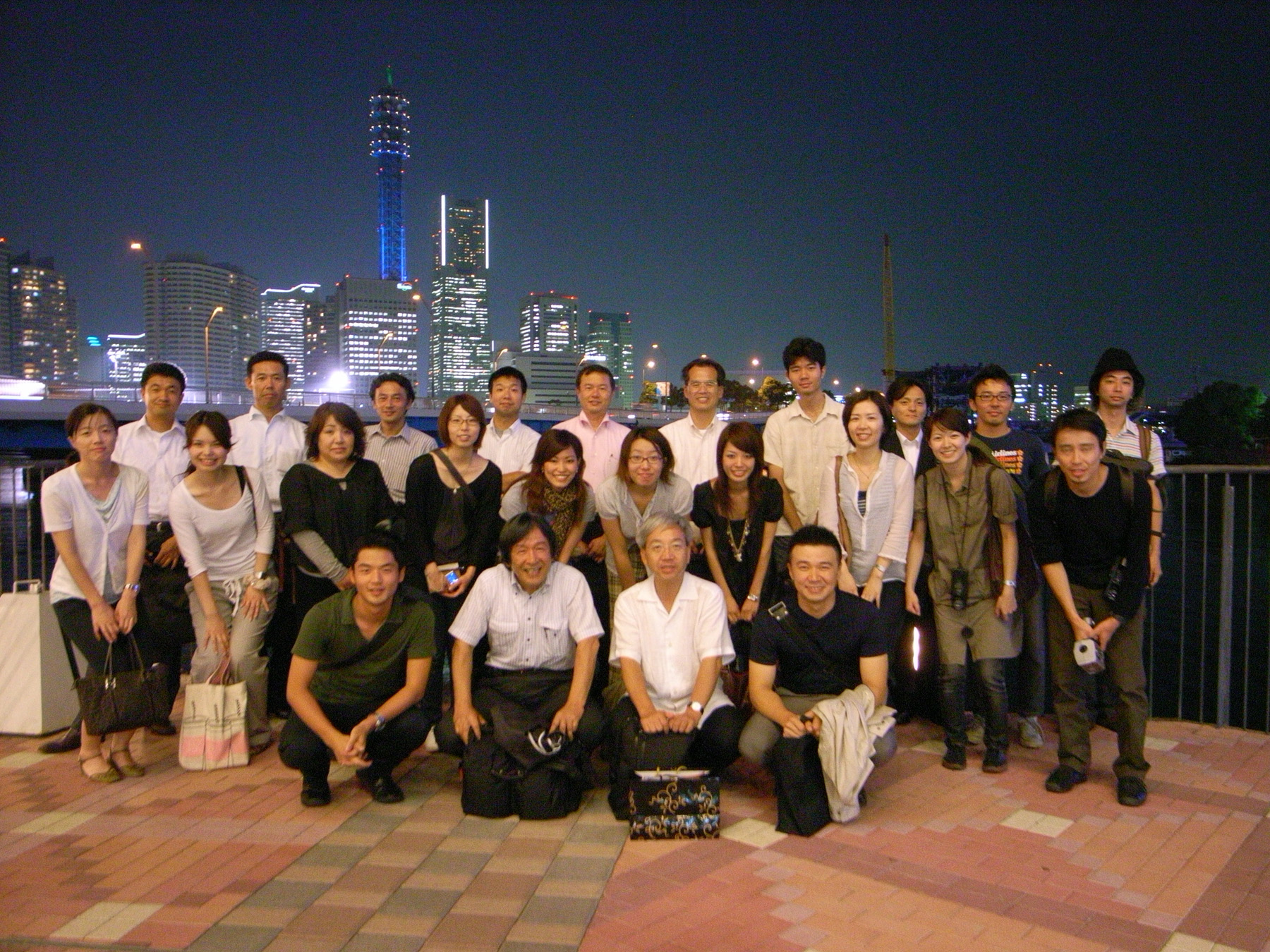 The waterbus left Yamashita Park and headed for the Minato Mirai area. As riding a boat is a break from the everyday routine in Tokyo, this little portion of the walk was especially memorable for all the detectives.

I don’t know how far we were from the shore, but before I knew it the entire Yokohama nightscape was a huge panoramic scene surrounding us. With so many different lighting elements it was overwhelming. Far on the horizon little dots of light floated and seemed to connect with the linear lights of the Bay Bridge and Osan Bashi Yokohama International Passenger Terminal. The building crowns of the Sakuragicho Skyscrapers capped a luminous peak for the scene with the continually moving ferris wheel and kinetic lighting add a psychedelic rainbow of colors. A peculiar sight was the Red Brick Warehouse, bathed in sodium lamps, stood out against the milky white streetlights in the background.

The man-in-the-moon also joined our walk, as the full moon glistened and seemed to be the welcoming committee for this city of lights. The lights along the waterfront continually shimmered on the surface of the water creating a picture-perfect nightscape for this bayside city and we had the best seat in the house!

The portside of the station has an image of a major highway with heavy traffic and maybe the Sogo Department Store, but defiantly a barren area without much appeal for pedestrians. But after the opening of the Yokohama Bay Quarter in 2006 this once sedated area is alive and active with people who have come from all over because of the superior access by train, car, and boat.

The building, itself, is very open. The canal and bay nightscapes are visible from the pedestrian deck along the perimeter of each floor and restaurants and cafes with alfresco dining surround the main plaza, perfect for Minato Mirai night gazing. But who knows how long this view will last as the construction boom continues to support high-rise condominium development between the view and Yokohama Bay Quarter.

Are the new condominiums going to be a villain of light, crushing this picture-perfect waterfront or a hero of light, contributing a new lighting element to the nightscape? We’ll have to wait and see….

Interviewer: Jio Yeung Jio： I always wanted to become a video game designer, unfortunately I had to give up my dream.  I am just a beginner when it comes to design so I am looking forward to learning a lot from our talk today.  First, I wou…

Ljubljana, the self-contained capital of Slovenia has a charming old cityscape made up of buildings topped with red tiled roofs. At dusk, people flock to the Ljubljana River to rest after a busy day and watch the lights come on over the cit…