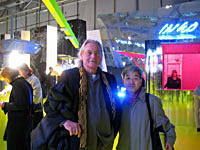 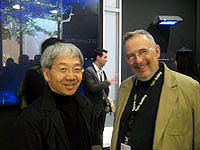 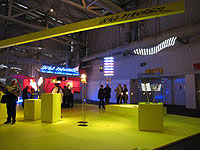 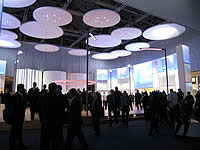 Once every two years「Light & Building」, the world’s largest lighting trade fair, opens in Frankfurt and I always make a point of attending. This year was no different, as my fourth time to attend, along with five colligates from LPA; we took up residence in Frankfurt for three days. The Frankfurt trade fair started just eight years ago, but its predecessor was the Hanover trade fair. I used to attend that fair as well and it just seemed like a fun time. All trade fair event halls are the same crowd of people poking around the booths until they are bushed, but the Frankfurt trade fair has a different feel. Like Europe in the springtime when fresh white asparagus should begin showing up on the menu, I just can’t not go!

I said we were at the exhibition for three days, but really its only two and you can’t do much in two days. I leave the combing of the huge event hall to the younger staff and I seem to network more than I look at the fixtures. I am thrilled to see old friends from the lighting profession again. Just prowling around the exhibition hall and I’m bound to be tapped on the shoulder or suddenly hugged or hear my name called from afar, endless boisterous encounters. There are also those encounters that I don’t try to initiate or avoid altogether, but sometimes there is no other choice. Standing and chatting with old friends for even a short amount of time we get reacquainted and catch up with each another. Contact through email or seeing a familiar face in a magazine we know each other to be good spirits, but a friendly handshake, squeeze on the shoulder, or schoolboy bantering reaffirms our common interest and shared passion. During these two days I was able to meet many, many of my old friends again.

The first picture to the right is Ingo Maurer and I. I look forward to his studio productions every year, but I heard his office is now staffed with 120 people!! I also hear that he is working on many lighting projects for underground train station, bringing his energy to the construction site not just through continued development of poetically imaginative lighting fixtures. I really respect him for not just living a fun-filled life, but for joining his junior staff in creating these works. Ingo Maurer #2 and #3 and #4 and…are bound to come flooding out of his studio.

The second picture is of NYC kingfish, Paul Marantz and I. Standing in front of a large manufactures booth, he was deep in explanation to some of his junior staff when I found him. I stood with the group listening to their conversation until our eyes meet and me both let out a hoot! It was a great reunion! When I was just starting LPA I hoped to emulate his style and thought his persona would be a good end goal. His hard, scrutinizing stare and soft, affectionate gaze are an incredible balance.

In the world of lighting designers there are still many, many talented professionals working around the globe.

Interviewer: Hiroyuki Miyake Theme：Development in Technology and the Changing Role of Light in 2050 Miyake Today I`d like to discuss the “Role of Light” in the future over a broad span of time.  In interviews conducted with 100 people for t…