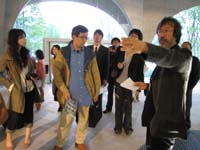 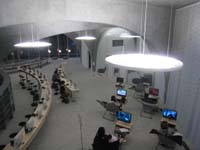 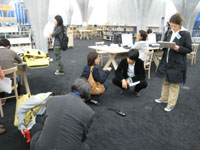 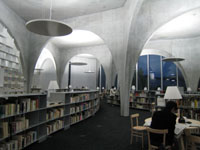 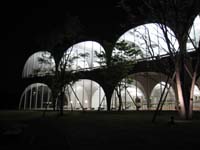 Ever since the new library was finished I have wanted to go and see it, so 15 members of the Lighting Detectives gathered around dusk for the Tama Art U. campus version of a city walking tour. It is well known that the architect is Toyo Ito and furniture designed by Kazuko Fujie, but for the past 10 years Professor Satoshi Tabuchi has been coordinating the architectural and developmental planning of Tama Art U. Campus. In spite of his busy schedule Prof. Tabuchi was able to give the Lighting Detectives a private campus tour.

The library was built on a hill and the first floor slopes with this natural incline. It was a little bit peculiar and although, I have experienced a non-horizontal park built by Arakawa + Gin before, a sloping floor aroused a slight strangeness. I was taken back to the feeling of running around in the sandlot as a child or walking uphill on a faraway. However, while the floor is sloping, all of the tabletops are level. As you sit and concentrate on your work or books you just forget about the sloping floor underfoot.

Since we are the Lighting Detectives, out came the luminance meters to calculate floor, table top, vertical, ect. lux levels. I forgot the exact numbers, but tabletop luminance levels were right around 400 lux. This is a good number for super ambient up lighting to the ceiling. Floor lamps with oversized shades were also placed around the room, adding a trendy touch and increased the luminance in these areas.

The fluid curve of the furniture and its layout also adds to the total design impact along with soft, suspended lighting through out this universally designed space. Questions from the Lighting Detectives included: “Is the white light really ok?” or “Did you know that the suspended lighting lamps are visible?” We would like to hear the answers from Mr. Toyo Ito himself, but I think, in terms of white or orange color temperature, if a mixture or separate usage was not acceptable, maybe they had no choice, but to go with white light. And maybe just as well, as daylight is the most influential during the heavy use daytime. But we can still see the fluorescent lamps suspended from the ceiling, and naturally I would like something done about this, but I was not the appointed lighting designer. So maybe we should just mark it up as a simple mistake. I’m sorry Mr. Ito!

Interviewer: Junko Nagatomo Nagatomo：Today’s topic is the art of decluttering or living a minimalist lifestyle.  Decluttering is a thought process of yoga.  I didn’t know this, but in Japanese the three characters that make up t…