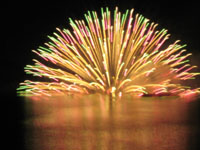 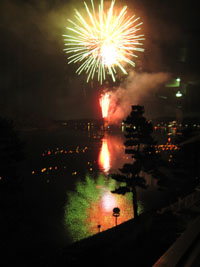 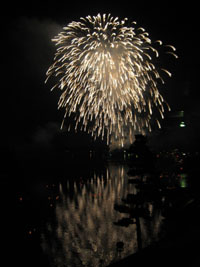 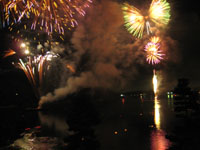 There is a famous hot spring called Kasanji in Hamamatsu, Shizoka. By fate, I was invited to the Hotel Kokonoe, run by the Entetsu Group, to view the annual firework show the last weekend in July. The scene from the hotel is picturesque with the waterfront of Hamanako Lake right out the door and Mt. Okusa in the background.  And from this very spot we were to view the 5000 fireworks show. But in the meantime, we relished delicious delicacies of local fish and locally brewed sake. At 7:30 we heard the thundering “BOOM, BOOM!” signaling the start of the fireworks. The local children had written wishes on 1000 or more floating lanterns that now flowed in the lake current under the streams of exploding fireworks.

It looks like the two launch pads for the fireworks were built in the middle of the lake. The setup is like a set of twins preparing to do battle, alternating the launch of fireworks, and trying to out do each other. But, fireworks are just not the same. Nowadays, there are various shapes, colors and even odd sounds. Yes, my guess is everything is devised so the audience won’t get bored. And that is something I just can’t understand. I really don’t think it is a very good idea to turn traditional Japanese techniques into high-tech entertainment just to indulge popular demand. We aren’t talking about LED`s. Fireworks don’t need to be that colorful. Also, it shouldn’t be a matter of quantity fireworks, but an opportunity to design the dark interlude between each firework. A simple performance of sound and vibration would suffice. This has turned into a professor / student critique, but that is how I feel.

Japanese fireworks should not just be a graphical presentation, but a cleaver, 4-dimentional performance, including three fundamental elements: sound, timing, and a body of water.
1.) The explosion should vibrate the air enough shake the living flesh.
2.) From the screech of the fireworks as it climbs into the sky, until the BOOM of the explosion, there should be a moment where everyone holds their breathe in anticipation.
3.) Fireworks should be watched from below, preferably right below, not off in the horizon.
4.) Create an interlude between the last BOOM of the explosion and final crackle, as the fireworks shower down, until the soft thud, thud as the next firework is being launched.
5.) And most importantly, you gotta have water to create a reflection!

This might be all that is need for a great firework show. But at the Kasanji fireworks show, we grew too comfortable in our premium, air-conditioned seats in the restaurant, and quite possible excluded the best part of the evening. We absolutely regret watching the fireworks through the big glass windows!

22 December 2005 It was a chilly winter night for the December 22, 2005 Candle Night event. Across the street from the new Otomesando Hills construction site in the final months of opening-day preparations, soft, warm light danced along the…

Discussion at a rooftop cafe. City walk through Lucerne and pictueresque photos on Kapellbrucke Bridge. Core members enjoy Swiss food at the farewell party. View of the old town from the new city center. Kapell Bridge is one of the Europe`s…