Located in high latitudes on the Northern Hemisphere, northern European countries including Norway, Sweden, Finland, and Denmark are known to be very unique in terms of the seasonal natural phenomena – the midnight sun during the summer, and the polar night during winter. In this December, we went to some of the cities experiencing the polar night during winter to research lighting environment. Considering extremely long night hours can affect circadian rhythm, are city lighting and residential lighting in those countries designed to eliminate the problem? In this trip we closely looked at the light environment that are unique to Northern Europe, gained through observation of public facilities and residential lighting. Here is the research results. 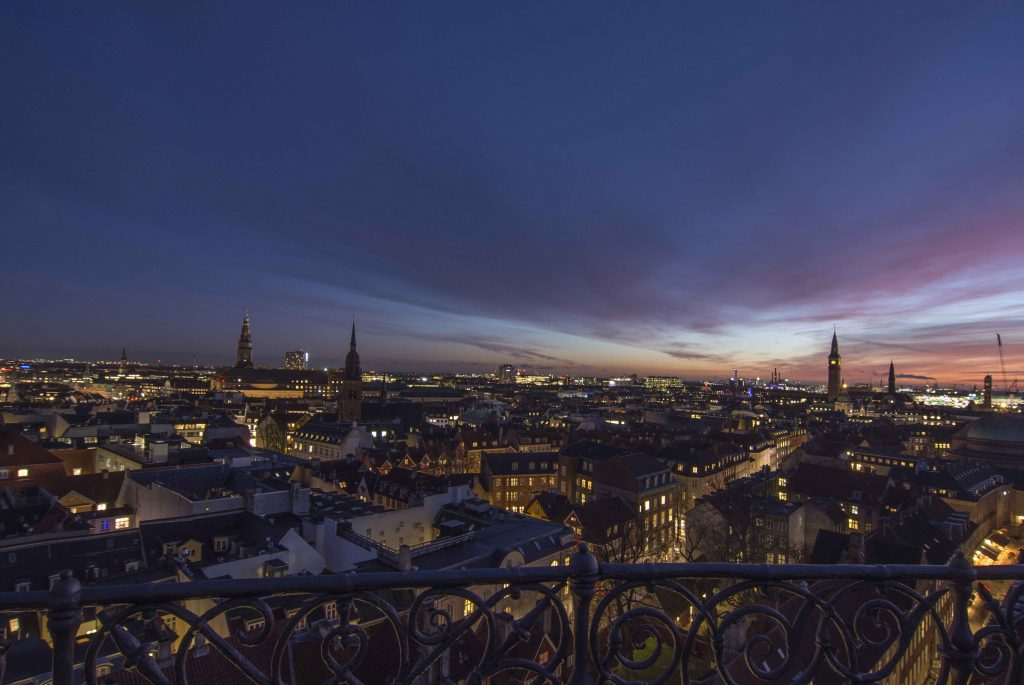 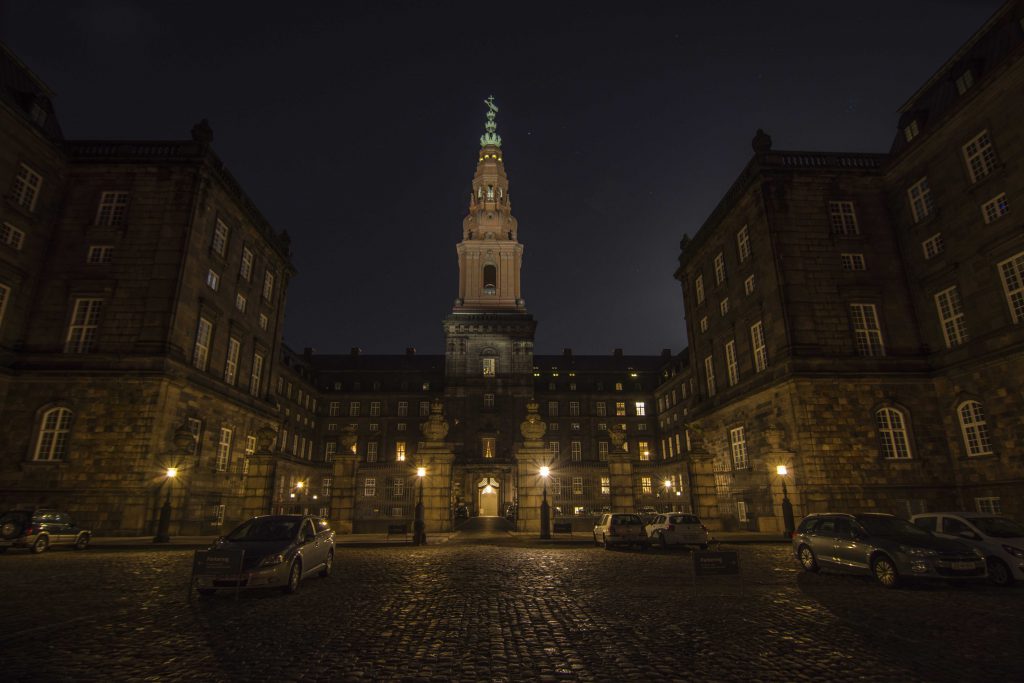 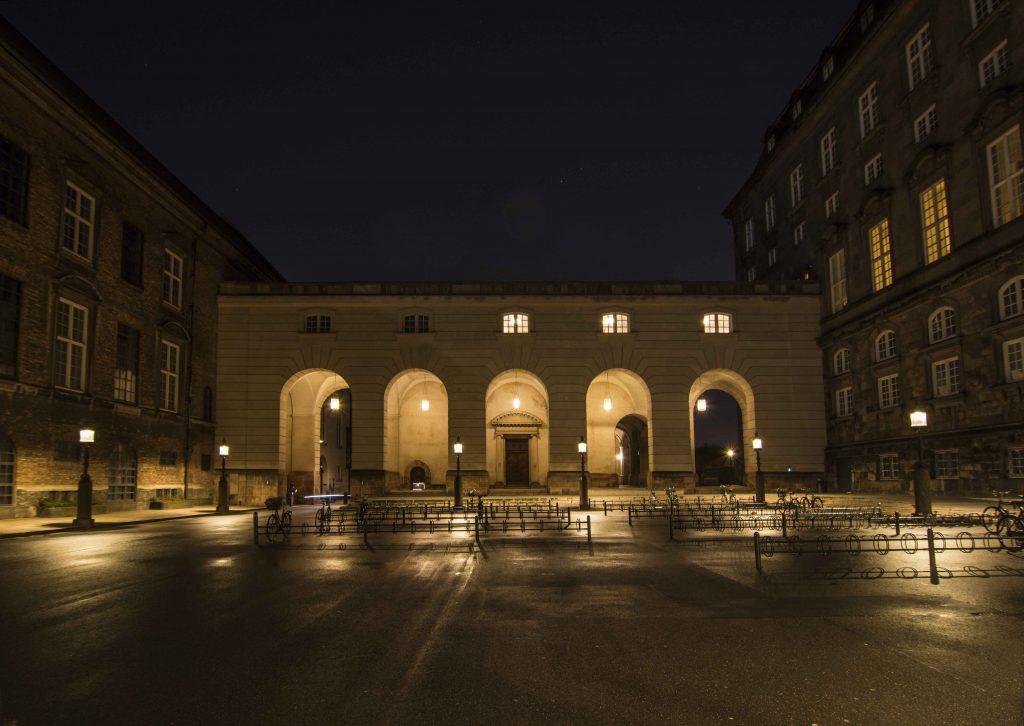 Pole lamps at bicycle parking outside the Danish Parliament 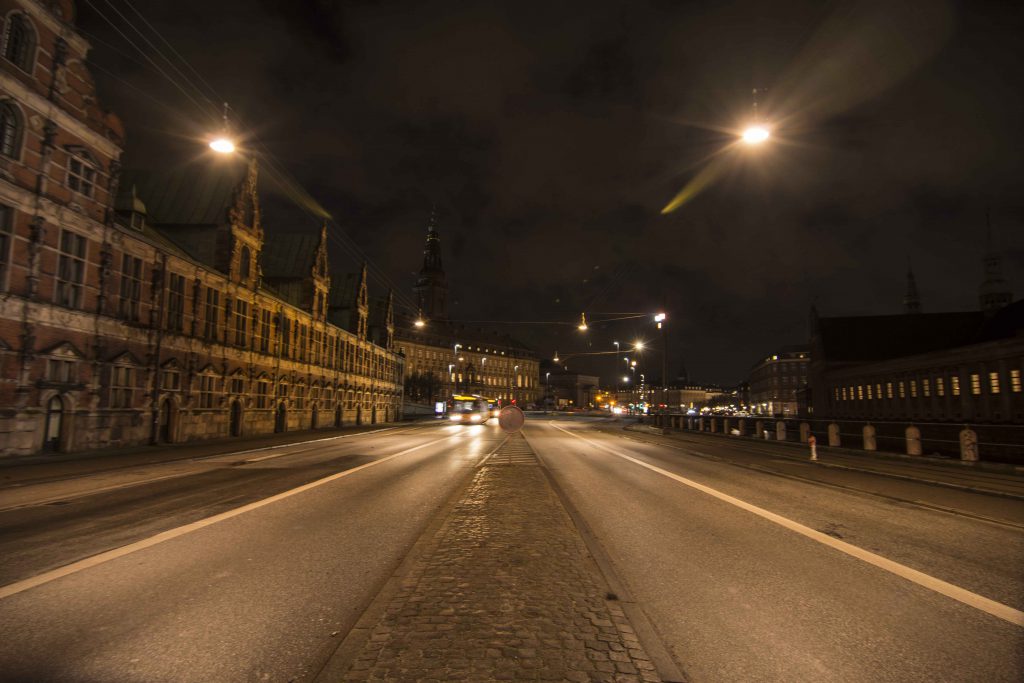 ■Copenhagen, Denmark
In Copenhagen, the capital of Denmark, classic design and contemporary design co-exist, each divides the city into visually distinctive areas. An area across a canal is on a new development with various kinds of new buildings are being constructed. If you walk in this city, you will feel the history of Copenhagen and be convinced how this city takes creative culture so important.

■Classical Lighting
Copenhagen is a city where you can feel its history reflected upon the classical architectural design and how they use light. The city is really dimmed; unlike cities in Asia like China and Japan, the whole city of Copenhagen is planned with warm temperature lighting. You will barely see the familiar bluish white light here. Catenary lighting is employed as street lamps. Although you see some glares from the fixtures, it is an efficient lighting method. Gentle light flowing through residential windows enhance overall façade lighting city-wide. Regular street lamps, approximately 11-meter tall, are placed on intersections.

When I walked down a main street, I found Børsen (Danish for “Exchange”), the Old Stock Exchange built in 1618 – 1624, one of the oldest buildings in Copenhagen and is owned by an individual since 1857. I first thought it would be better to add some facade lighting onto the historical architecture, whose long brick walls face the street, but I walked up and looked closely to notice that the façade was actually lit very, very subtly. Poles were placed on the opposite side of road in front of the building, holding some façade light fixtures and wires for catenary lighting. The brick façade was illuminated from 27 meters away by using two types of fluorescent lamps. Its vertical illuminance was 3-30 lux and the color temperature was 2400 – 3500k. Depending on a context, this sort of subtle lighting treatment may look better than bold and complex façade lighting that I thought was familiar to. 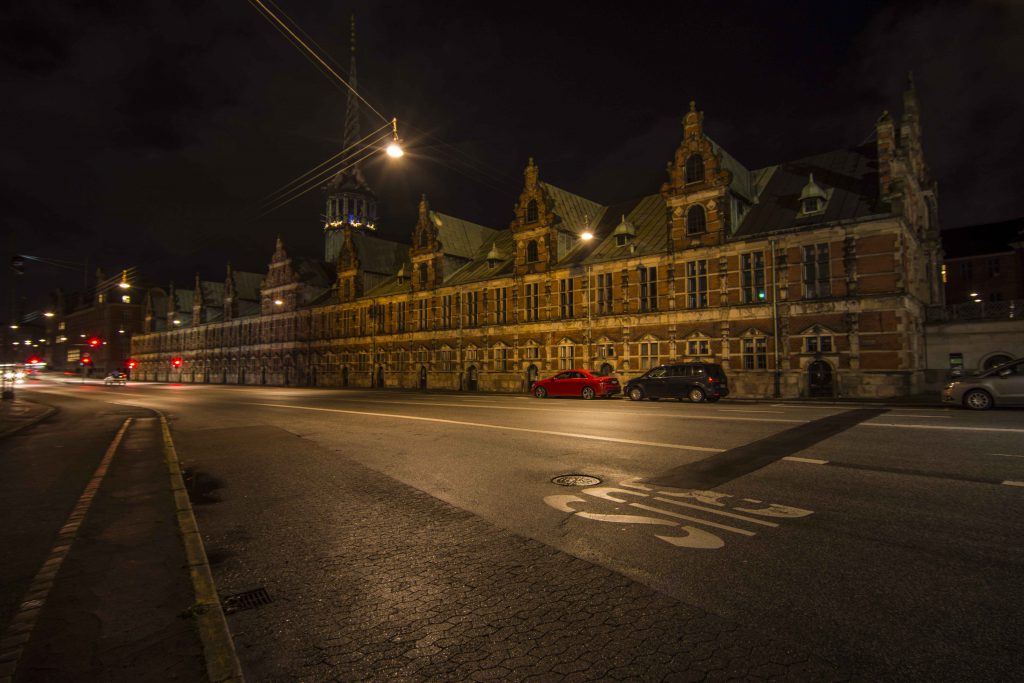 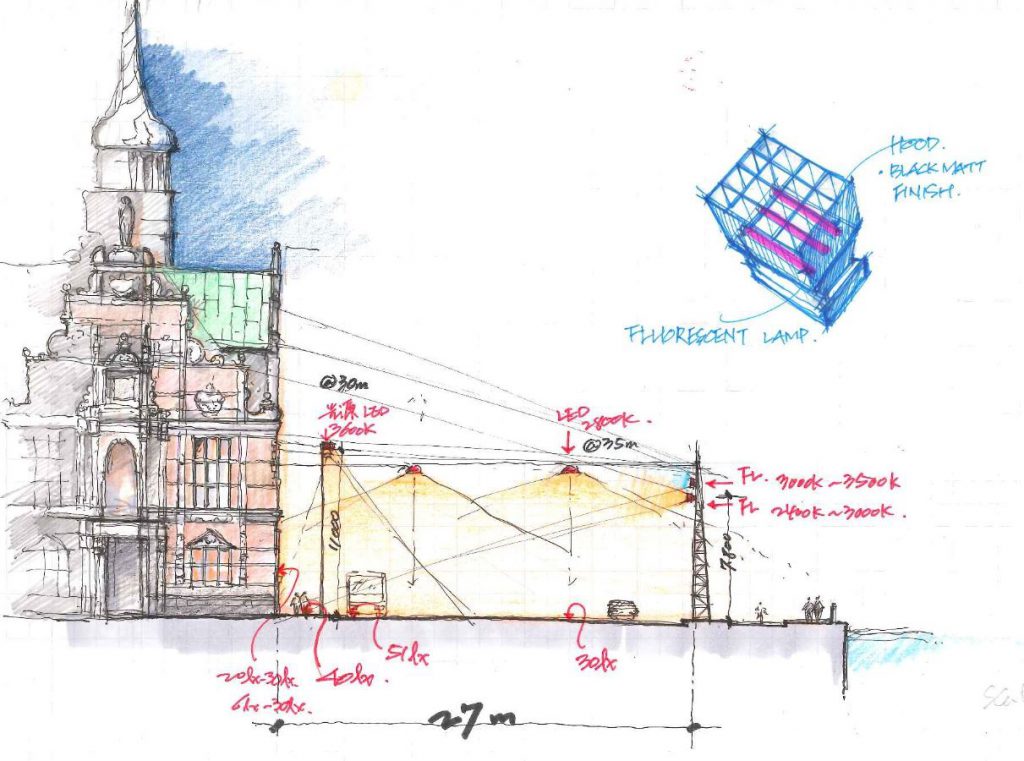 Section drawing of the facade lighting at the Old Stock Exchange 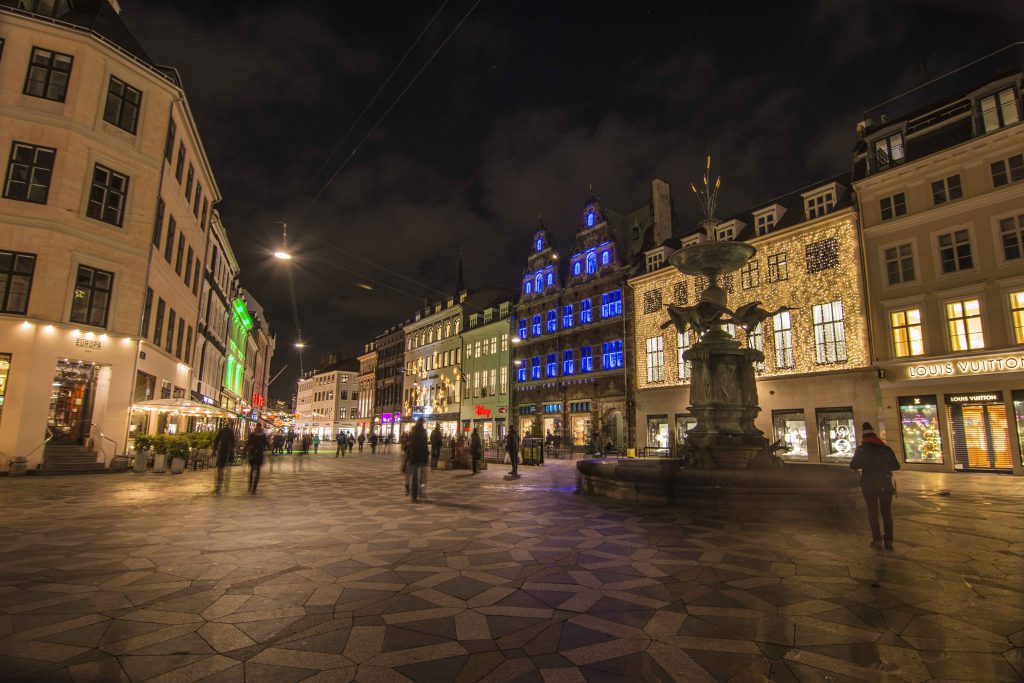 ■Lighting in the Fairytale Kingdom
Built in 1843, the Tivoli Gardens colors the long-hour winter nights in Copenhagen. Winter lights during night-hours in the Gardens was a good surprise to me. They had a pretty decorative lighting design, yet it wasn’t too much at all. As I walked in through a main entrance, I felt like I entered a light forest and as if I was took to a different world. Unique amusement park rides at Tivoli Gaardens were lit by RBG lighting fixtures, all kept at low color temperature light sources approximately in 2400k. Besides their lighting show, there were also some fantastic lighting installations that coordinated with music and water fountain. It is no exaggeration to say that the lighting design in Tivoli Gardens should become the standard of designing amusement park lighting.

The best thing that’s worth to mention is that low color temperature luminaires occupy 90% of the light fixtures in Copenhagen to preserve the city’s historical atmosphere, which has been composed of traditional light sources including candles, gas lamps and incandescent lamps.

The capital in Denmark, ranked as #1 in World Happiness Index, has a long history. The history and culture of the city is well preserved and reflected in everyday life, and the people seem to enjoy their lives in such a warm environment. (Hu Lin) 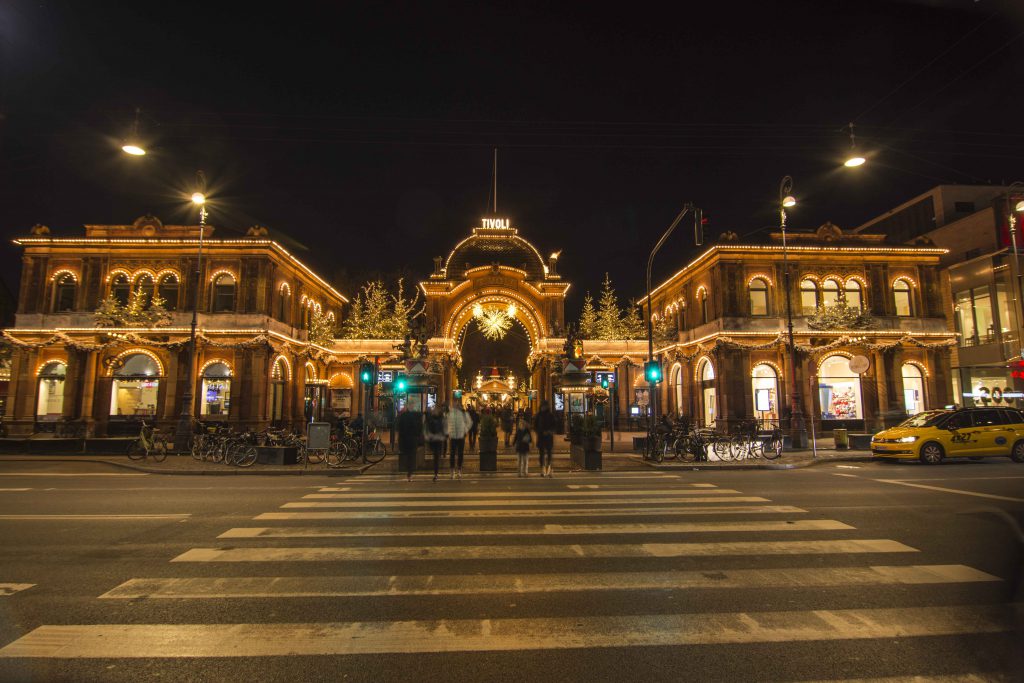 The main entrance to Tivoli Gardens 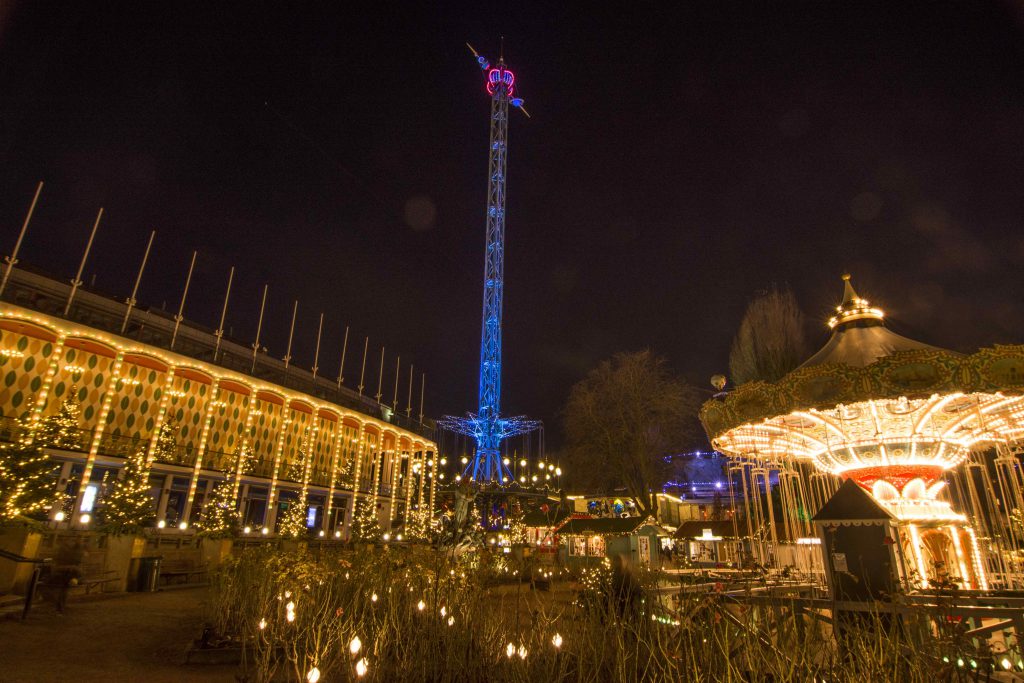 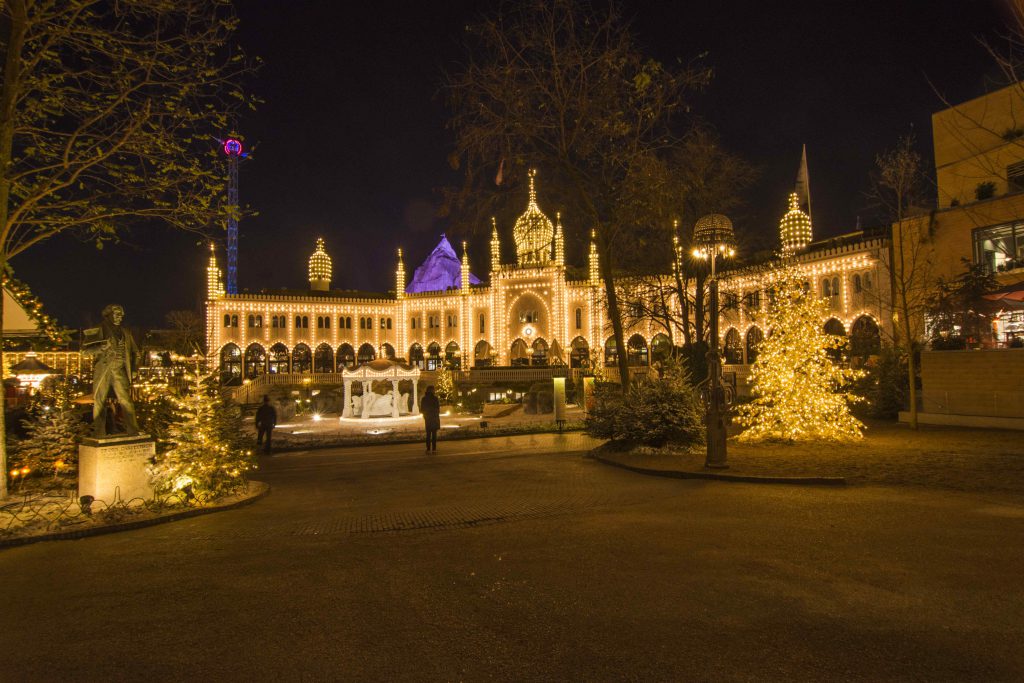 The main square at Tivoli Gardens 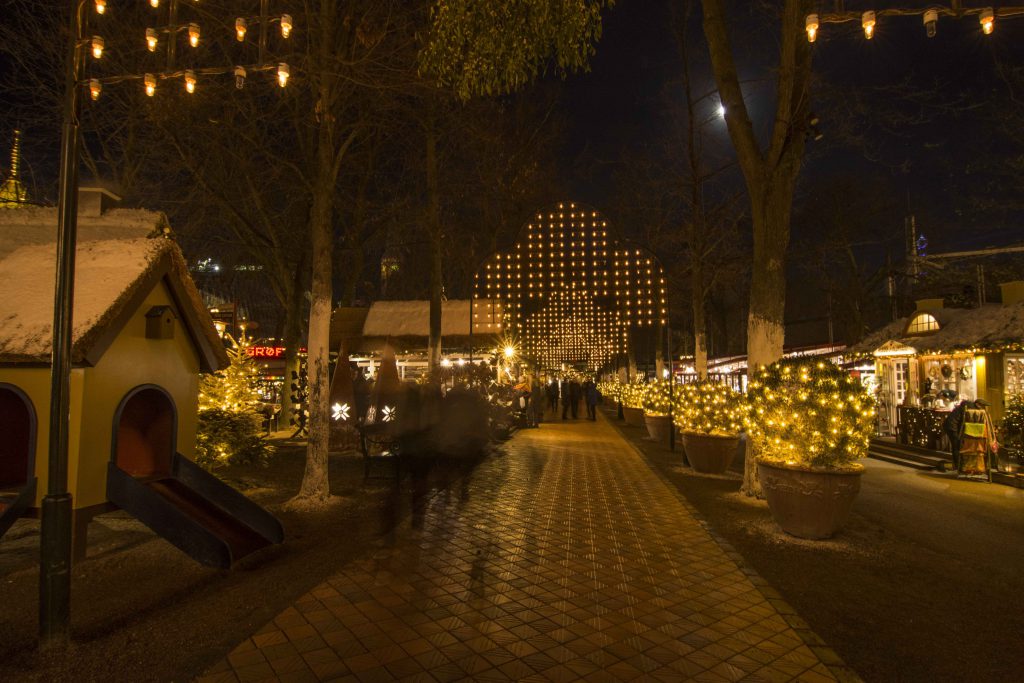 A pathway at Tivoli Gardens

■ Stockholm, Sweden
The city of Stockholm, which consists of 14 islands and over 50 bridges, is particularly concerned with waterfront landscape. There is no lighting applied onto outer walls facing the water. With the sky on background dyed in dark blue, uniformed warm-colored light seen through neighboring windows creates a rhythm in a horizontal line. Emitting sparkly orange light, pole lamps decorate the city like a stardust. The light reflected on the water, also in warm color but with slightly varied hues and strengths, creates an exquisite gradation. Although it was during Christmas season in December, there was no holiday lights nor colored lighting decoration. Even a big holiday tree had just a single hue of white light, though the illuminance level was high at least. 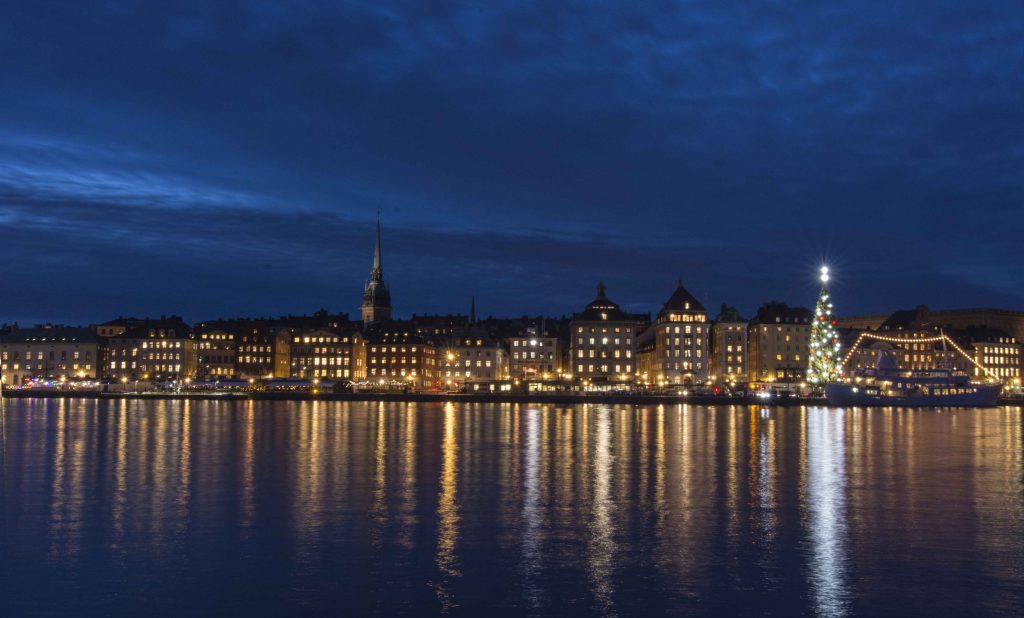 ■ Calm and dimmed cityscape
For those who live in Japan with a lot of white security lights, the city of Stockholm may feel very dark. The greatest cause of the dimmed feel lies in the difference in color of luminaires. Shapes of lighting fixtures may vary, but the color temperature of most light sources is set at 2700K even in major roads and parks in Stockholm. As a result, the whole city gains a calm and restful atmosphere. Taking the Royal Park and its surroundings as examples, on an east side road, which leads to a bridge connecting Normalm and Gamla Stan, there are 2700K light poles being placed every 19 meters just on one side of a street. On the other side of the street, only approximately three meters high multi-directional light poles were installed, presumably because there was enough light level given by the light leaking out from buildings lined up facing the street. Still, you have got 8 – 20 lux on sidewalk and 30 lux on road so there is enough illuminance. Some street light poles were designed to incorporate uplights that illuminated trees and spotlights that light facade up on the other side of the street.

The light level inside of the Royal Park was 1- 5 lux, but on the sidewalk it was about 10 lux, so I didn’t feel it’s unsafe nor dangerous to walk. At the time of the research, a skating rink was set up in a plaza, which was lit with eye-catching purple colored light. Light poles were used here, but in general, I’ve seen catenary lighting in most of streets in Stockholm like Copenhagen. By eliminating supporting poles, not only it makes streetscape appear less noisy, but it also enables light sources to illuminate road surface efficiently from up in the middle of the streets. There were also some catenary lighting design that incorporate indirect lighting. 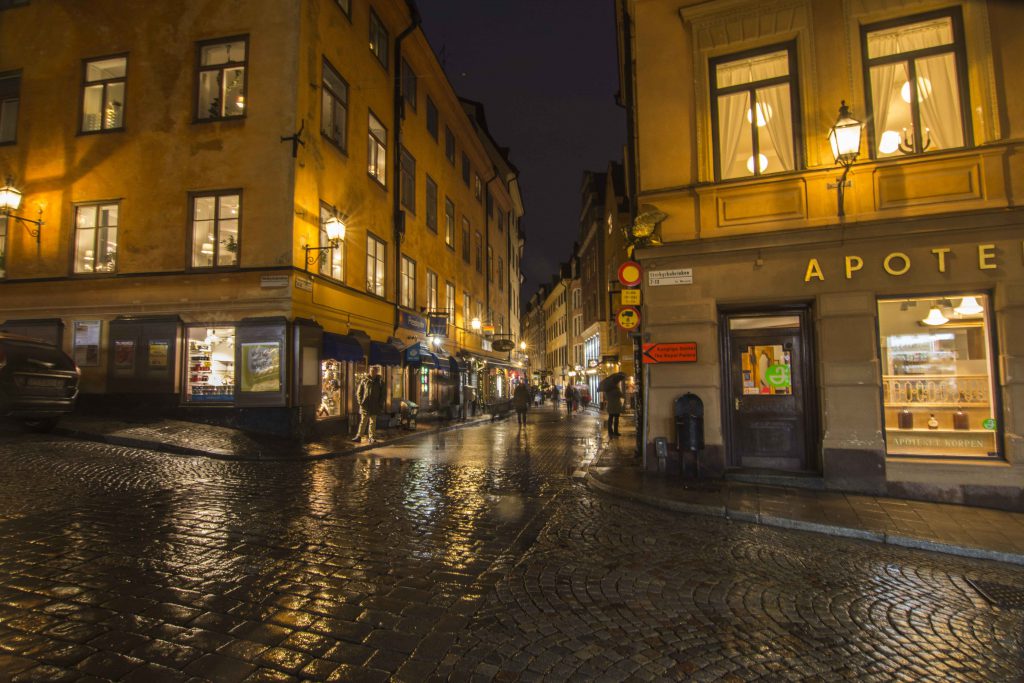 Cobblestone streets in the Old Town, Gamla Stan. Instead of light poles, lanterns are mounted on architectural facade. 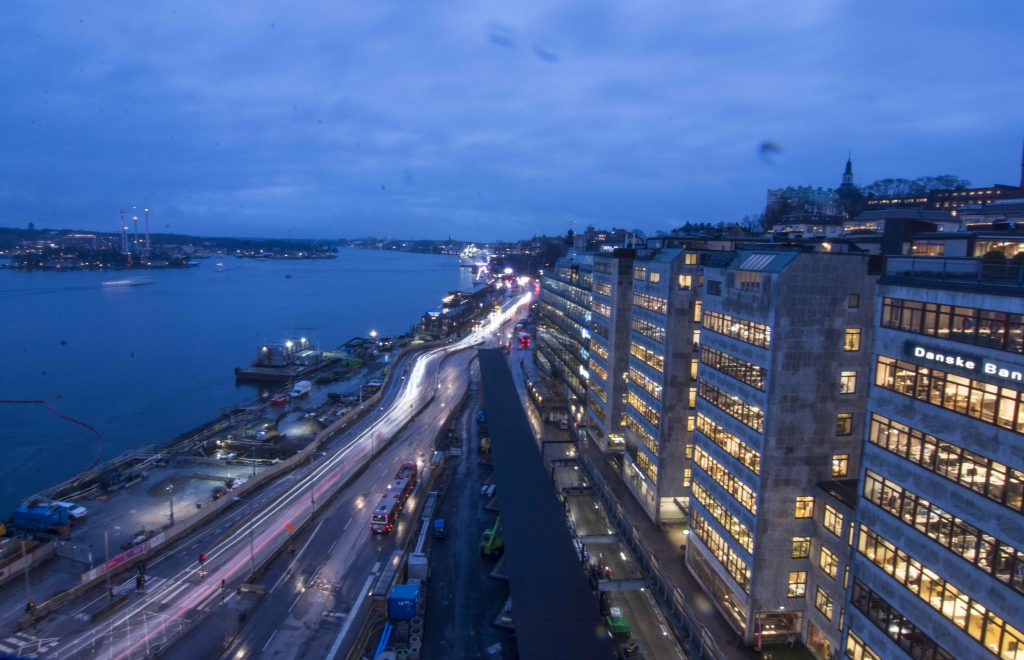 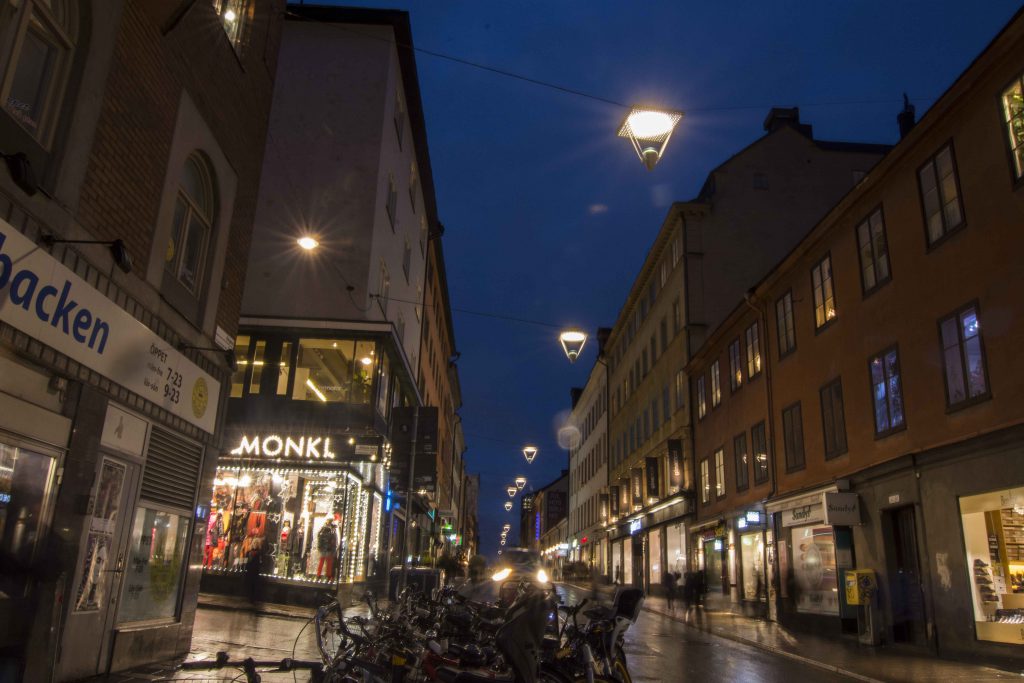 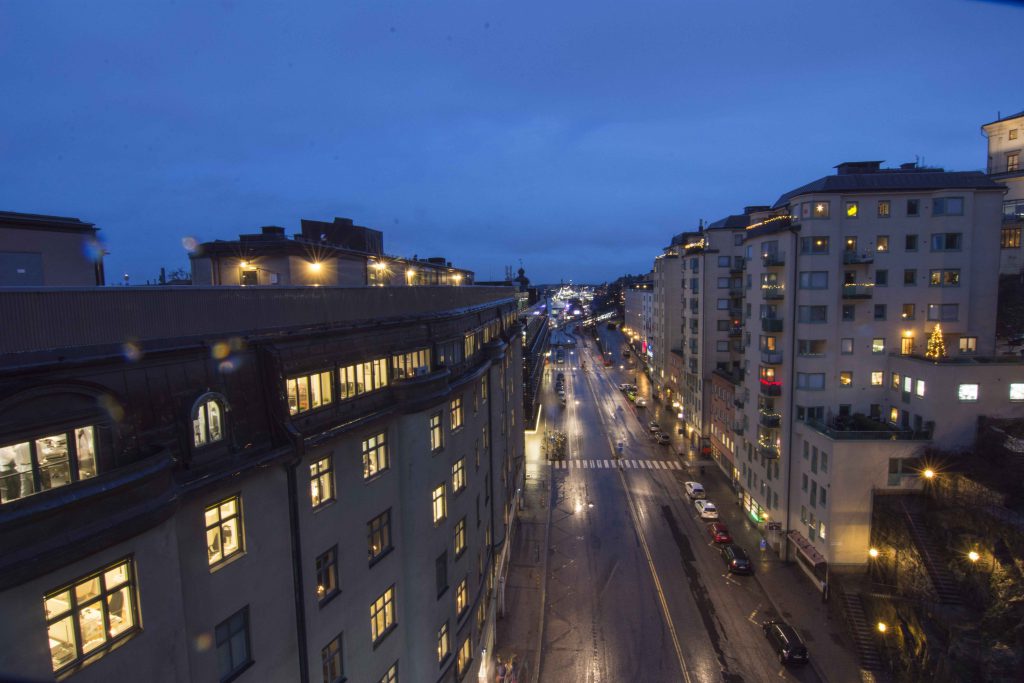 Catenary lighting that illuminates the middle of the road 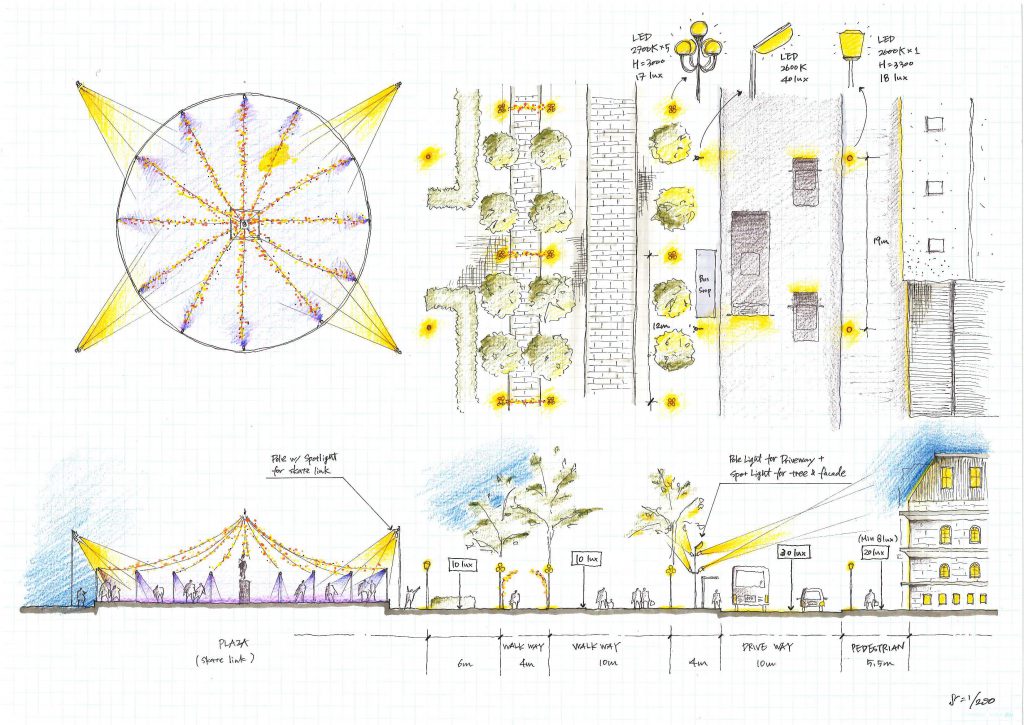 ■ Residential Lighting
Light closest to our daily lives is the light found in private houses. When I was walking down the street in the city of Stockholm, I noticed that all the lighting that were seen through the residential windows were warm colored lights, and there were many floor lamps seen by the windows.

This time, we got an opportunity to see inside a private house where one of our Lighting Detective members lived in. There, instead of illuminating rooms with flush-mount ceiling lamps, there were pendant lamps, floor lamps, and table lamps doing the job within a house for a family of four, including two kids in elementary school. I was surprised to know that even kids were particular about lighting, as there were DIY-ed ornament lighting and an indirect lighting behind the bookshelf in the children’s room. All the lighting in the house were warm colored ones. It was relatively dimmed, but they said it was the very standard as a living environment for regular families.

I’ve seen a study report that says the way people sense brightness depends on light environment that they grew up. Children in Northern Europe, indeed, develop their tolerance to darkness while they live in a low illumination environment. In Japan, on the other hand, there are still a lot of houses with the “one luminaire per room”, which makes Japanese people feel awkward living in a dark environment after they grew up. I realized that getting used to the dark environment from an early stage in lives would develop a sense of light that doesn’t demand excessive brightness. 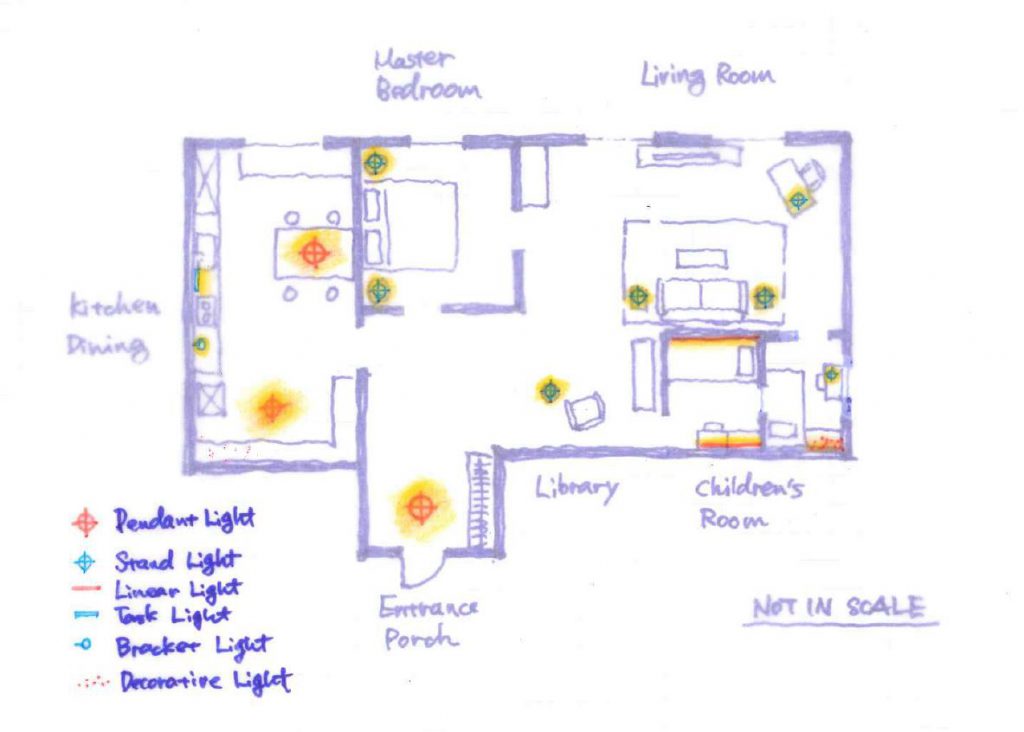 There are table lamps placed at where those need to be. They say the family is super picky about the designs of lamps. 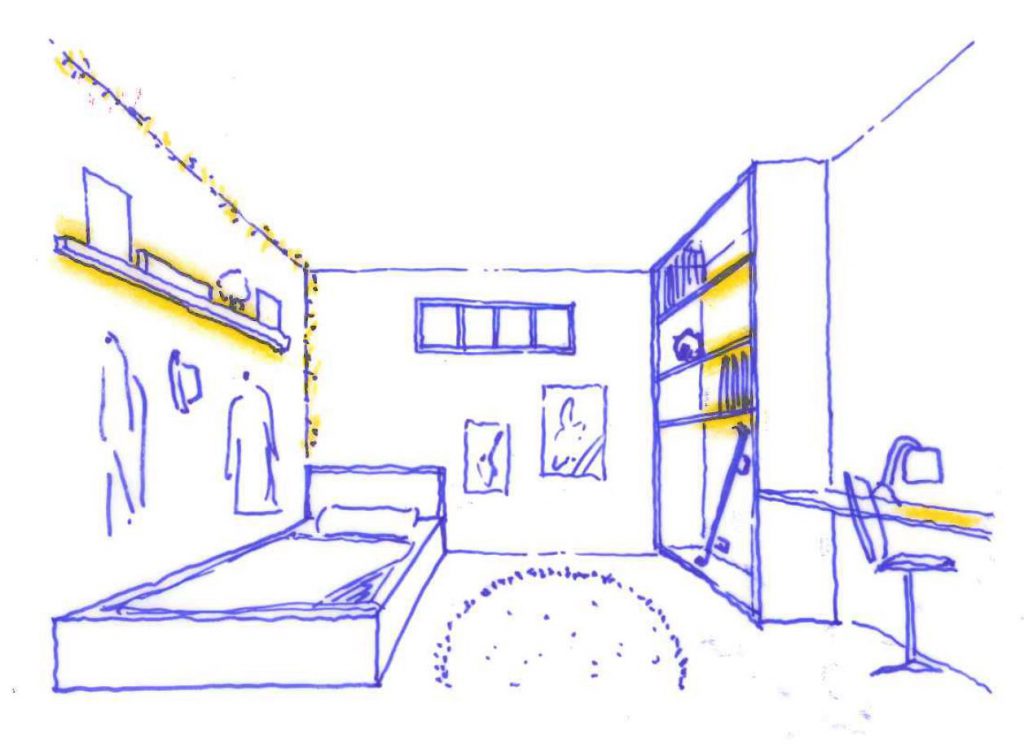 Children’s room is lit only by DIY-ed indirect lighting. Tiny window makes the room really dark, but the kids told me that wasn’t really disturbing.

■The longest museum in the world
Subway stations in Stockholm are like art galleries. Different artist is assigned to each station to design by their own according to a theme. Unique light installations were available, including the color shadow at the Central station underground and neon tube installation at the RADHUSET station. In a series of works that are inspired by cave, uniformity is obtained by applying a same illumination technique and color temperature. I thought it was a great idea to amuse their users by revitalizing and transforming formerly monotonous and cold subway stations into ones full of personalities. I might not be the only one who’s eager to come back to Stockholm again to visit all the stations of the longest museum in the world. 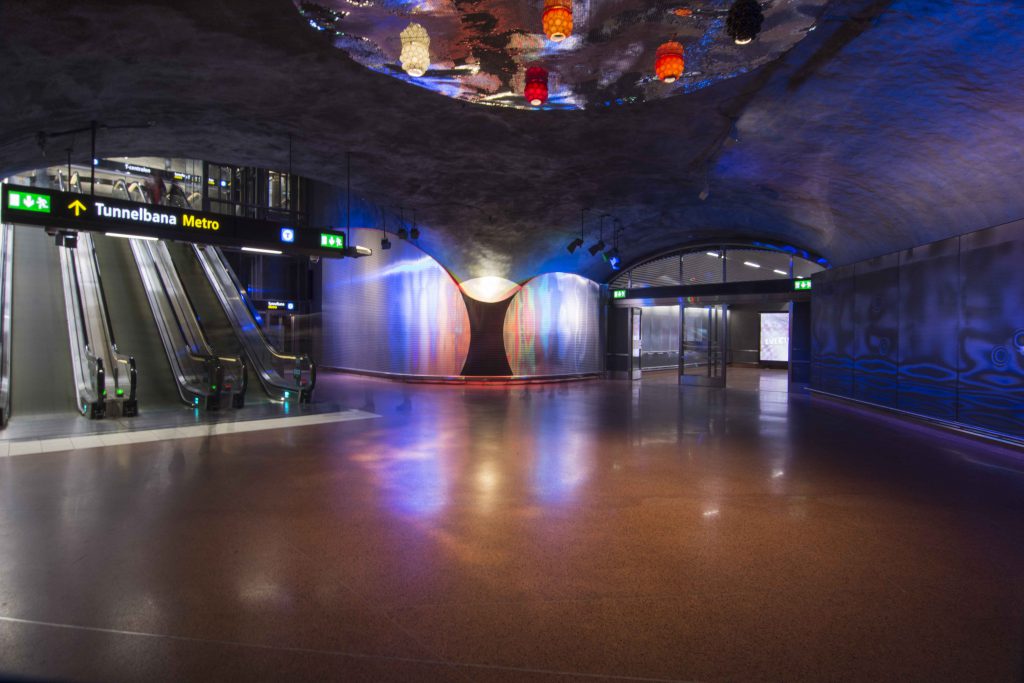 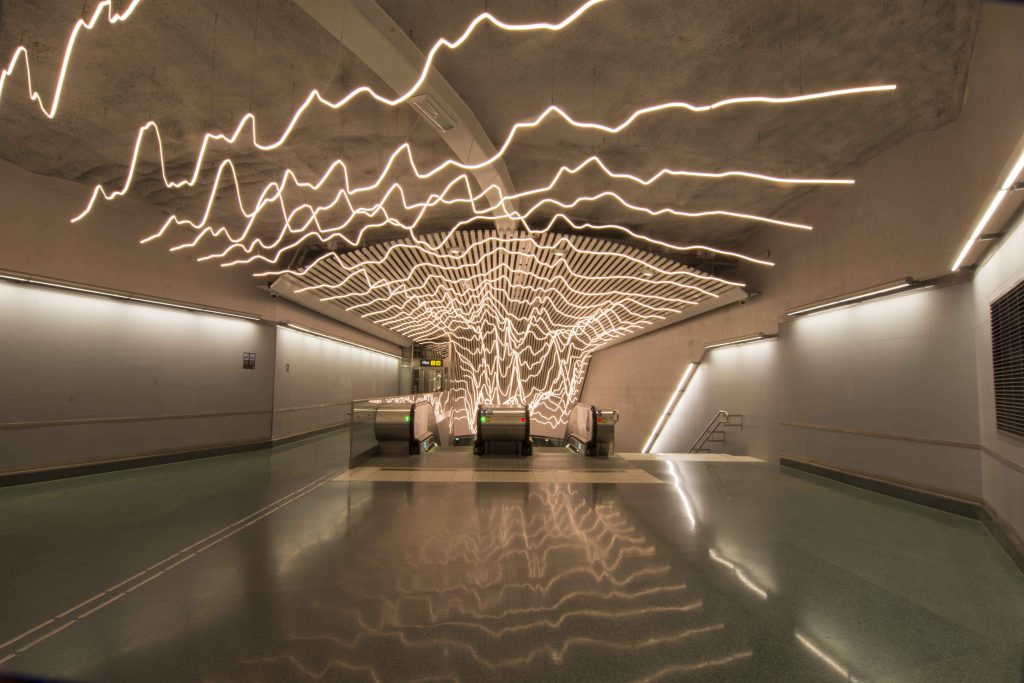 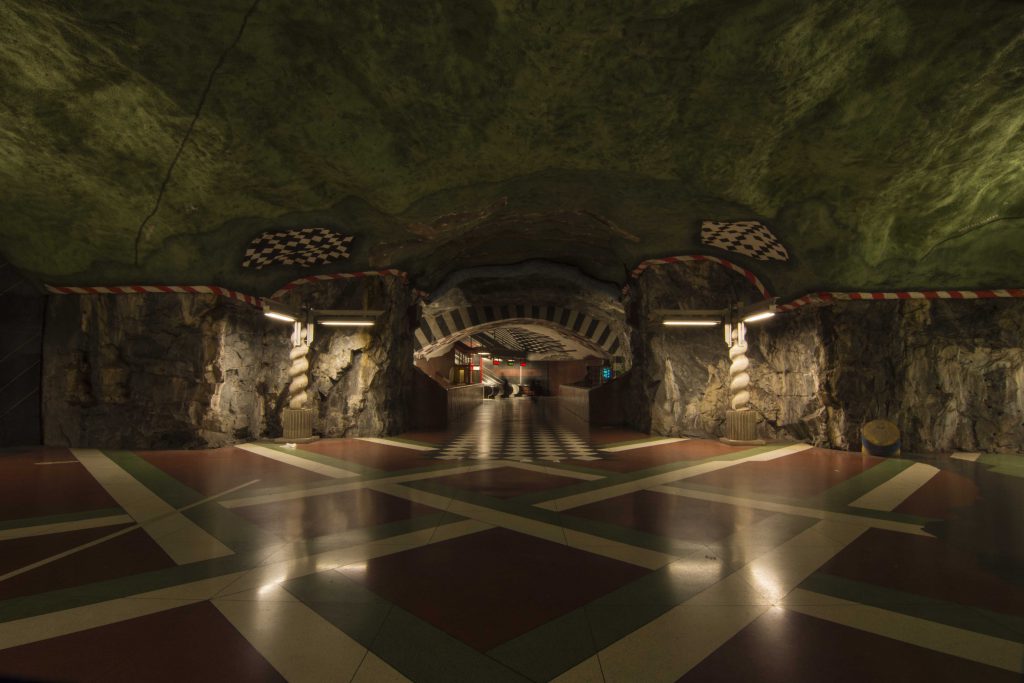 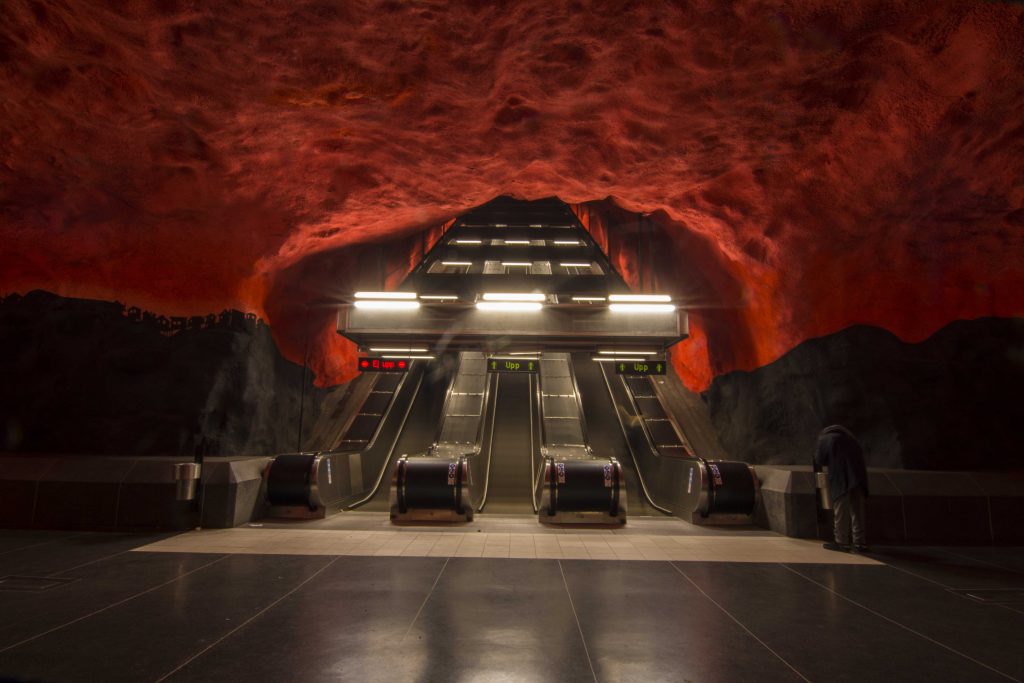 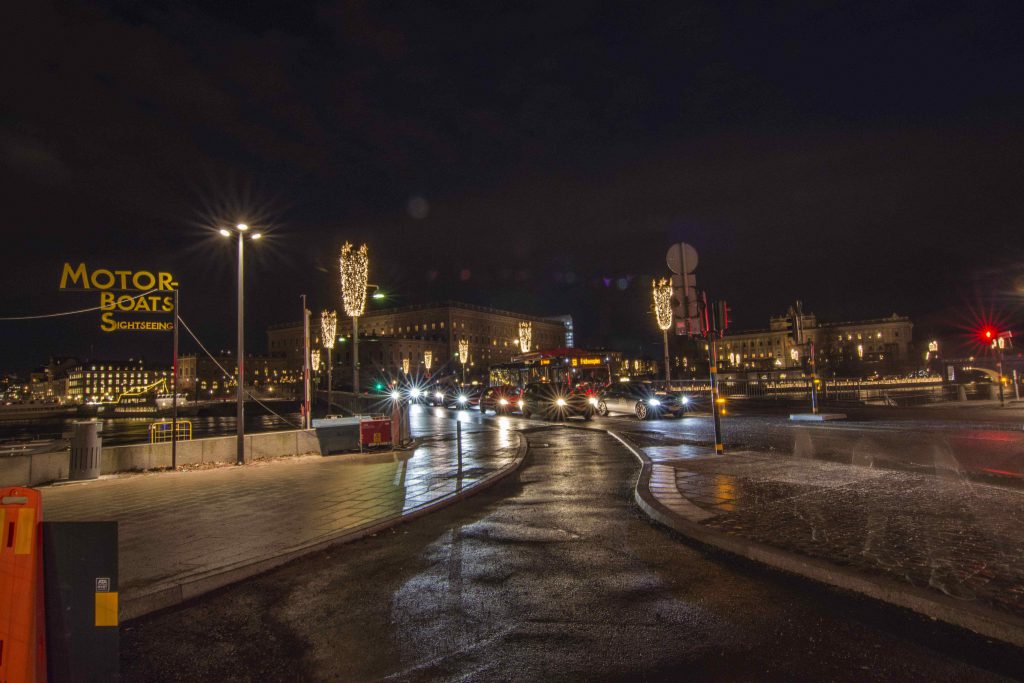 The thing that I felt most through the research is that people in Scandinavia are very sensitive to glare and brightness. In those Scandinavian countries, they try to minimize glare by employing indirect lighting as task lighting and by using lightproof plates and louvers in public facilities. The brightness of the whole city can be described as “the minimum level at which safety is maintained”. You barely see lit-up buildings nor advertising signboard that are dazzling. Instead, street lamps and lights seen through windows form the lightscape of the cities. I was able to see some fancy holiday light displays as I visited there in December, but in general those displays were less bold compared to those in Japan. For the Northern European people who spend 2/3 of a day in darkness at this time of the year, these warm lights in the city is the healing light that relaxes feelings. (Simeng Huang) 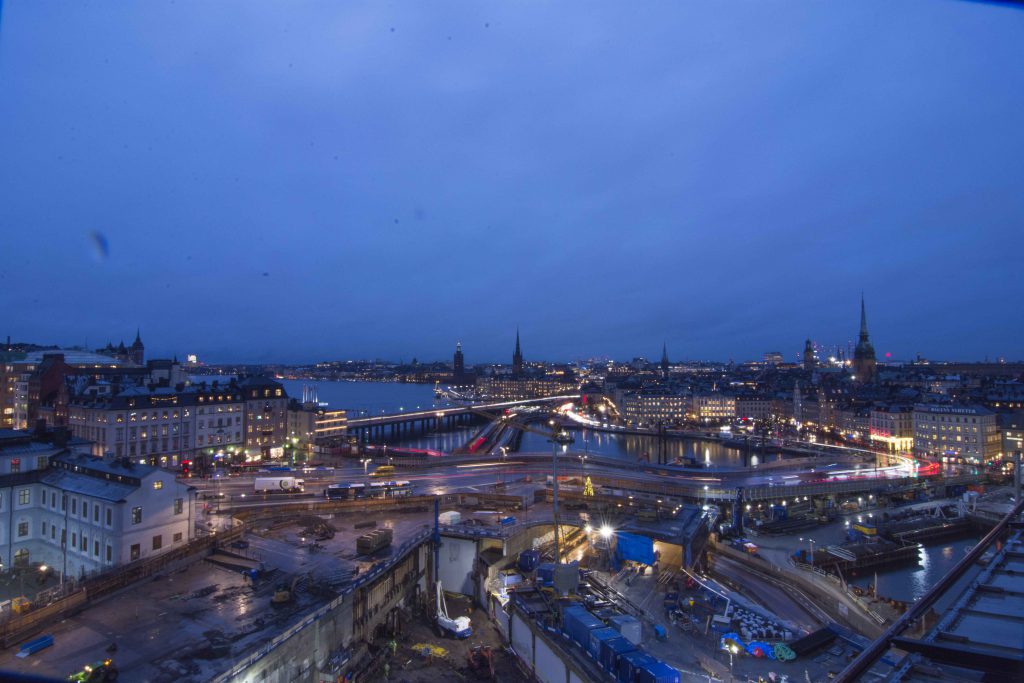 View of Strömmen bay overlooking from a hill in Södermalm

Barcelona is a city of monuments, whether driving or walking, these unforgett- able symbols of Barcelona are everywhere. At night, the lights of the city further jog one’s memory and create distinctive perspective projections. Streaks from …

Interviewer: Mayumi Banno Theme：The Herbivorous Younger Generation Banno For a change, I`d like to talk about the younger generation today and their nickname as “herbivores” or “introverts.” Since I have been with LPA, I have had the opport…

While the streetscape and lighting environment are very individualistic, an overall unity exists throughout Fukuoka. Throughout the city, a skilled balance between lighting for public and private areas is implemented. The lighting in the un…

Shimokitazawa is a neighborhood of small shopping streets and alleyways, projecting a strange, but comfortable atmosphere, as people crowd the backstreets until late in the night. However, plans to replace this quaint neighborhood with arte…